The mayor of Wuhan has admitted people were "not satisfied" with the rate that his government released information on the coronavirus, adding that it was "not disclosed in a timely fashion."

Mayor Zhou Xianwang, whose city is at the epicenter of the virus outbreak, told state-run CCTV Monday that "we didn’t effectively use that information" in its response.

He explained that under Chinese law on infectious diseases, the local government first needs to report the outbreak to the national health department, and then get approval from State Council before they can make an announcement.

"I hope everyone can understand that this is (an) infectious disease which has special channels to be disclosed in accordance with law," he said.

The mayor added that he took responsibility for the "unprecedented" decision to lock down the city. 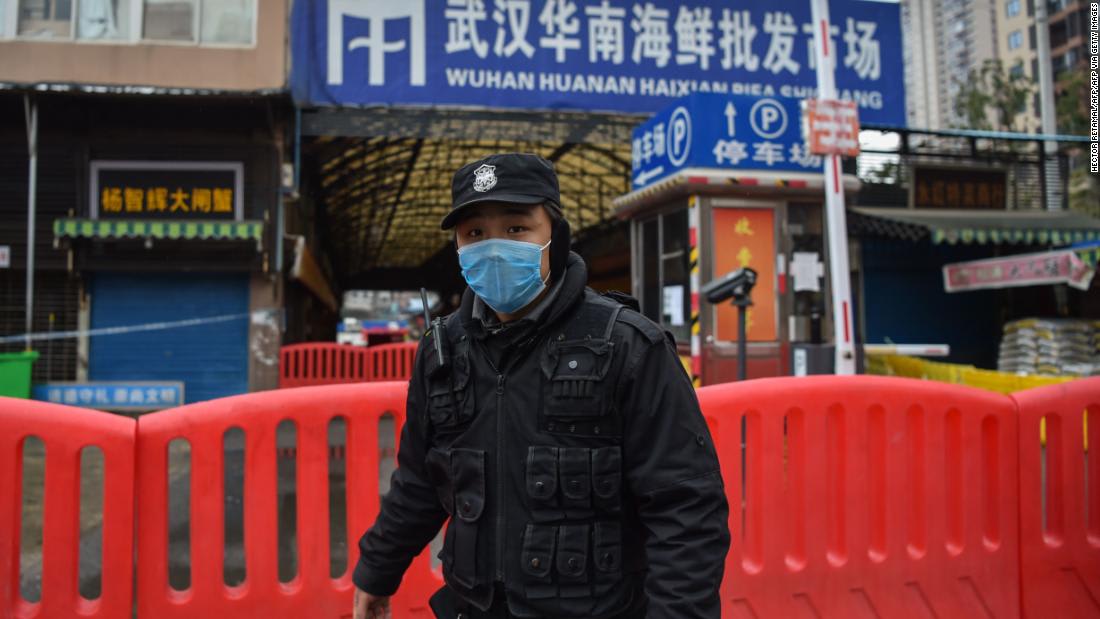 Israel's Ministry of Health has joined several countries around the world in warning its citizens against "unnecessary" travel to China in light of the coronavirus outbreak.

The ministry warned Israelis to avoid the Hubei region, the epicenter of the virus, altogether.

A number of patients have been checked for the virus in Israel and the West Bank after suffering symptoms of respiratory disease, such as fever and coughing.

As of Monday morning all cases -- apart from one -- had tested negative for the virus. The results of that case are still pending.

Major European markets are down sharply Monday -- almost 2% -- as worries over the coronavirus escalate.

French stocks are being hit particularly hard, with luxury and travel companies suffering the most. Such companies would usually be reaping the benefits of Chinese New Year spending, experts say.

Elsewhere, Asian markets were lower and oil prices dropped 3% with Brent crude trading below $59 a barrel -- its lowest level since October.

US stock futures also tumbled Sunday, after the Center for Disease Control and Prevention confirmed a fifth case of the virus in the United States.

Both Paris and Madrid are working with Chinese authorities to repatriate French and Spanish citizens who are currently in Wuhan.

France will fly its citizens back home from Wuhan “in the middle of next week," the country's Health Minister, Agnès Buzyn, said Sunday.

"All our citizens in Wuhan, about 800, are connected to the consulate,” the French Health Ministry told CNN Monday.

"The Prime Minister has decided to respond to the French people of Wuhan and their request to return. Our consulate team is in contact with the nationals. All those who wish to return will be able to do so,” Buzyn added.

“We are arranging a direct flight from Wuhan," she said.

Buzyn said those who return to France will be monitored in one place for 14 days to avoid any spread of the virus.

A spokesman for the Spanish Foreign Ministry also told CNN that "the ministry is working with other European Countries affected to organize a joint repatriation flight."

In a statement, the ministry said: “The Minister of Foreign Affairs, EU and Cooperation has spoken with the Consul General of Spain in Beijing to obtain information of the situation of Spaniards in Wuhan."

There are about 20 Spanish people in Wuhan, the ministry said.

The number of people infected by the Wuhan coronavirus could potentially double every six days in the absence of a major intervention by public health authorities, according to Professor Gabriel Leung, chair of public health medicine at University of Hong Kong (HKU).

Leung, who is also the founding director of the World Health Organization Collaborating Center for Infection Disease Epidemiology and Control in Hong Kong, gave his forecast on the likely extent of the outbreak during a press conference held at HKU on Monday afternoon.

He said he had submitted his report to Beijing and Hong Kong authorities as well as to the World Health Organization (WHO).

Leung said according to his team’s model, the number of cases of Wuhan coronavirus including patients that are incubating (not showing symptoms) could approach 44,000 cases as of January 25.

This epidemic is growing at quite a fast rate and it’s accelerating,” said Leung.

In addition to Wuhan, Leung warned China could see epicenters of self-sustaining epidemics in other major cities in the mainland, including in Beijing, Shanghai, Guangzhou and Shenzhen.

"It is not a prediction, it is not certain, but these finding makes us concerned enough to alert the authorities and to alert the public,” Leung said.

According to Leung's forecast, the number of cases could peak between mid-May and mid-April in major cities.

In order to prevent this from happening, there would need to be “substantial draconian measures limiting population mobility sooner rather than later,” said Leung.

Leung said people need to be prepared for the outbreak to become a global epidemic, though it is "not a certainty by any stretch of the imagination…we must prepare better for it.”

There are more than 2,700 confirmed cases of the coronavirus and 80 deaths in China. Worldwide concern is mounting about the rate of its spread.

UPDATE: A previous version of this post contained a graphic that mapped coronavirus cases using raw counts instead of normalized rates. The graphic has been removed.

After a person in Los Angeles County tested positive for the Wuhan coronavirus, efforts are being ramped up to trace everyone the patient came into contact with.

The US Centers for Disease Control and Prevention (CDC) and Los Angeles International Airport are assisting in contact tracing, along with the Los Angeles County Department of Public Health.

Contact tracing is defined as the identification and follow-up of people who may have come into contact with an infected person, according to the World Health Organization.

During a press conference Sunday, Dr. Barbara Ferrer, director of the Los Angeles County Department of Public Health, said that her department is working, “with the individual who is infected, along with the airport – LAX – and CDC to identify persons who may have had close personal contact with this individual.”

Ferrer said the patient, who is a resident of Wuhan, ground zero for the outbreak, had previously transited through LAX.

The health department provided no further details about the patient’s condition, gender or age, or how many people have been contacted through their investigation.

The agency also announced at the press conference that all travelers coming from China through LAX are currently being screened.

The Los Angeles patient is one of two confirmed cases of Wuhan coronavirus in California. The other is in Orange County. The CDC on Sunday afternoon updated the total number of confirmed coronavirus cases in the United States to five.

The German Foreign Office has put out an updated travel advisory for China regarding the Wuhan coronavirus.

It is advising German citizens to: