Just a few months ago, the sight of government officials wearing masks would have been unthinkable -- for a very different reason.

As of today, there are eight confirmed cases of the coronavirus in Hong Kong. At the press conference, Lam announced additional measures including restricted travel across the Chinese border.

Masks in a different context: But a little over three months ago, in early October, Lam had invoked colonial-era emergency powers to ban people from wearing face masks in public assemblies as anti-government, pro-democracy protests rocked the city.

Protesters often wore face masks, as well as helmets and goggles, to obscure their identity and protect against tear gas when battling riot police on the streets.

For the entire second half of 2019, face masks were a symbol of the city's political crisis, and a statement on where you stood. When Lam announced the face mask ban, she said it would help "stop violence and restore calm to society," and act as a deterrent for protesters.

That means people will not be able to travel between Hong Kong and the mainland using the West Kowloon Station, Hung Hom, Sha Tau Kok and Man Kam To.

Planes: Flights from mainland China will decrease by 50%.

Trains: Lam said that cross border train services from West Kowloon -- which operates the high speed rail to the mainland -- and Hung Hom station will be temporarily stopped.

Ferries: All cross-border ferry services will be stopped, apart from ferries to Macao.

Buses and coaches: Bus and coach services coming from the mainland will also be decreased, Lam said.

Cross-boundary coach services at the Hong Kong-Zuhai-Macau Bridge will be suspended.

Visas: Lam said that after consulting with Chinese authorities, individual travel permits for mainland tourists will be stopped.

The US Centers for Disease Control is monitoring for symptoms of the Wuhan coronavirus at 20 US airports, the agency said on its website Monday.

The CDC had previously announced enhanced screening of passengers from Wuhan, China, at five airports:

The move to monitor more airports comes as the coronavirus continues to spread and the State Department prepares to evacuate US government personnel and private American citizens from Wuhan, the epicenter of the outbreak.

With more cases of the Wuhan coronavirus confirmed outside mainland China, here's how can you minimize your risk of getting infected.

Avoid close contact with anyone showing symptoms of respiratory illness, such as coughing and sneezing, the World Health Organization says. Other symptoms of this coronavirus include fever and shortness of breath. Severe cases can lead to pneumonia, kidney failure and even death.

Cook food thoroughly: Scientists believe this coronavirus started in another animal and then spread to humans. So health officials recommend cooking meat and eggs thoroughly.

Wash hands: Wash your hands often with soap and water for at least 20 seconds.

Cover mouth and nose: If you're the one feeling sick, cover your mouth and nose when you cough or sneeze, and disinfect the objects and surfaces you touch.

Wear a mask: If you or your doctor suspect you might have the Wuhan coronavirus, the CDC advises wearing a surgical mask.

Common sense: In general, the public should do "what you do every cold and flu season," said Dr. John Wiesman, the health secretary in Washington state -- where the first US case of Wuhan coronavirus was confirmed. 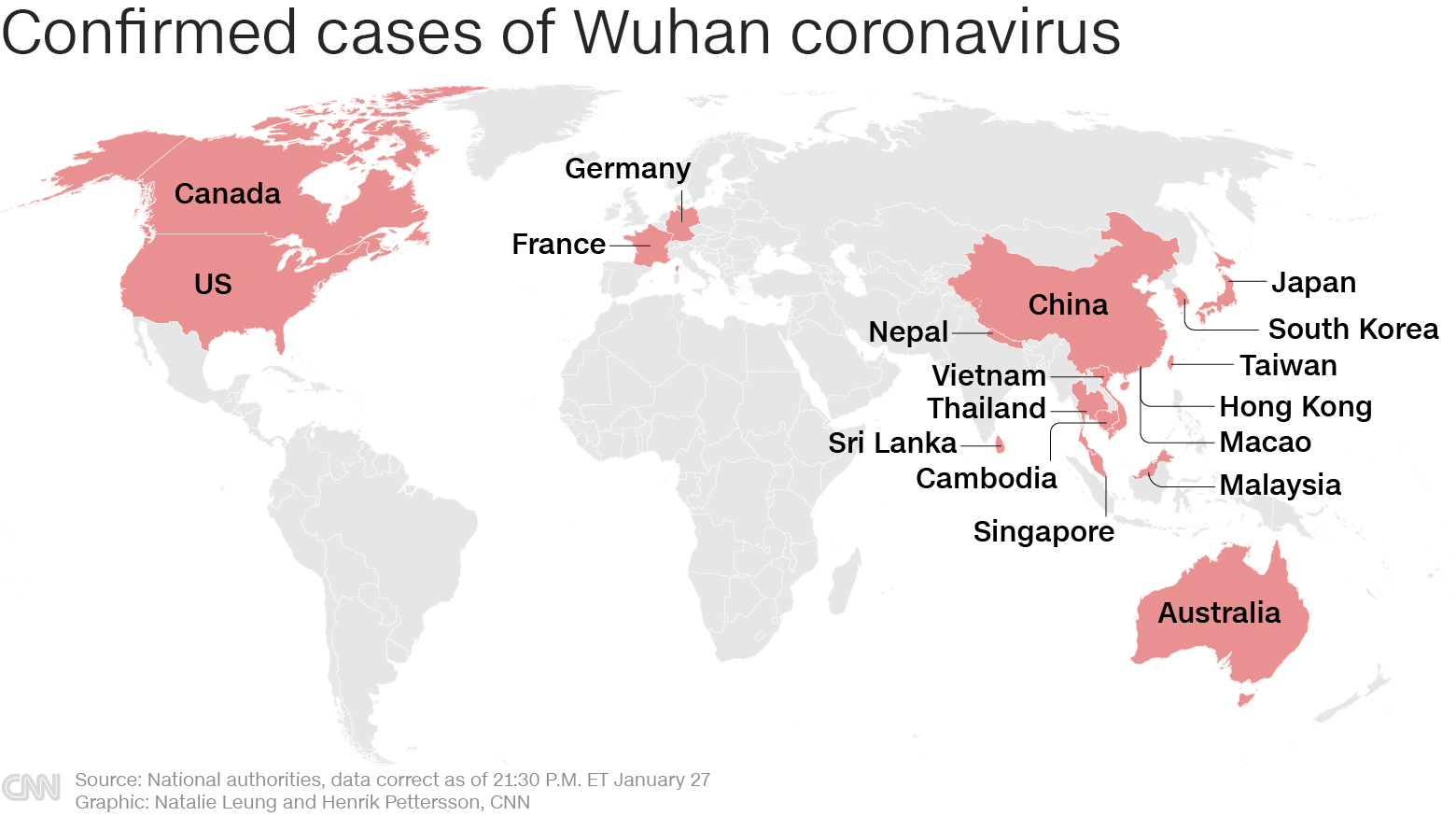 An Australian state government is asking students who have recently returned from China not to come back to school for 14 days amid concerns over the spread of the Wuhan coronavirus.

Australia has five confirmed cases of the virus.

The guidance from the New South Wales health department comes as most students in the state -- which includes the city of Sydney -- are due to return to school tomorrow after their summer holiday, according to CNN affiliate Nine News.

"We will be asking parents who may have holidayed with their children… if they have not yet been out of China for 14 days, then we're going to ask those parents, I stress 'ask those parents', to do what everybody else has been doing so well in this difficult time, and that is to support the community by holding back your children from going to each one of those facilities," NSW Health Minister, Brad Hazzard said, according to Nine News.

It is understood that the incubation period for the Wuhan coronavirus is 14 days.

"It is impossible to rule out the disease in the incubation period. So we urge people without symptoms, there is no use in going to your doctor or going to an emergency department for somehow a clearance. We cannot reassure you," NSW Chief Health Officer Dr. Kerry Chant said, Nine News reported.

Stopping to refuel: The plane will stop to refuel at Ted Stevens International Airport in Anchorage, Alaska, before arriving in Ontario, California, about 35 miles east of downtown Los Angeles.

Who's on board: About 240 Americans are expected to arrive in Anchorage, Alaska Department of Health and Social Services spokesman Clinton Bennett said. About three dozen US diplomats and their families are also expected to be on board, a US official with knowledge of the matter told CNN Saturday.

Priority has also been given to US citizens who are "most at risk for contracting coronavirus" if they stay in city, the State Department official said. There are about 1,000 Americans living in Wuhan.

"All passengers will be subject to CDC screening, health observation, and monitoring requirements," the State Department said in a statement.

How Ontario is preparing: Ontario Airport said in a statement Monday it has been working closely with federal, state, county and city partners to prepare for the arrival of the Wuhan flight. The airport has "conducted extensive training in managing situations such as this" and health, safety and security preparations are underway ahead of the flight's planned arrival, the statement read.

Ontario Airport will operate under normal operations during the flight's arrival, and the facility is taking steps to minimize risk to other travelers, staff, and the community, the statement read.

The Wuhan coronavirus is continuing to cause pain for investors.

Markets in South Korea and Japan fell on Tuesday, continuing a global selloff as the disease claims more lives and sickens people around the world.

South Korea's Kospi (KOSPI) plunged 3.1% Tuesday, its first day of trading after the Lunar New Year holiday. Japan's Nikkei 225 (N225), which did not close for the holiday, slumped 0.6%.

Markets in Shanghai and Hong Kong remain closed for the holiday.

"With coronavirus worries on the rise, the market continues to struggle with the unenviable task of factoring in absolute terms its implied economic devastation," wrote Stephen Innes, chief market strategist at AxiTrader, in a research note Tuesday.
"There remains a growing sense in the market that contagion levels could get worse before they get better," he added.

The coronavirus outbreak, which began December 2019 in Wuhan, China, has now made its way across the world.

So far its fatality rate appears to be lower than similar viruses like Severe Acute Respiratory Syndrome (SARS), but researchers are still gathering data and racing to contain the virus.

Let's break it down: