Russian Prime Minister Mikhail Mishustin has signed an order to close his country's far-east border with China, state media reports, in an effort to prevent the spread of coronavirus.

"An order has been signed today, it is in the works. Today we will inform everyone accordingly about the relevant measures to close the border in the Far Eastern region and other measures that have been taken by the government," Mishustin said, RIA reports.

“Trains will only follow the route Moscow-Beijing and Beijing-Moscow," she said.

Israel’s El Al Airlines said it was suspending flights along its Beijing route from today until March 25. It will continue its flights to and from Hong Kong.

The Israeli carrier joins several others halting flights to mainland China as the number of coronavirus cases in the country rises significantly each day. 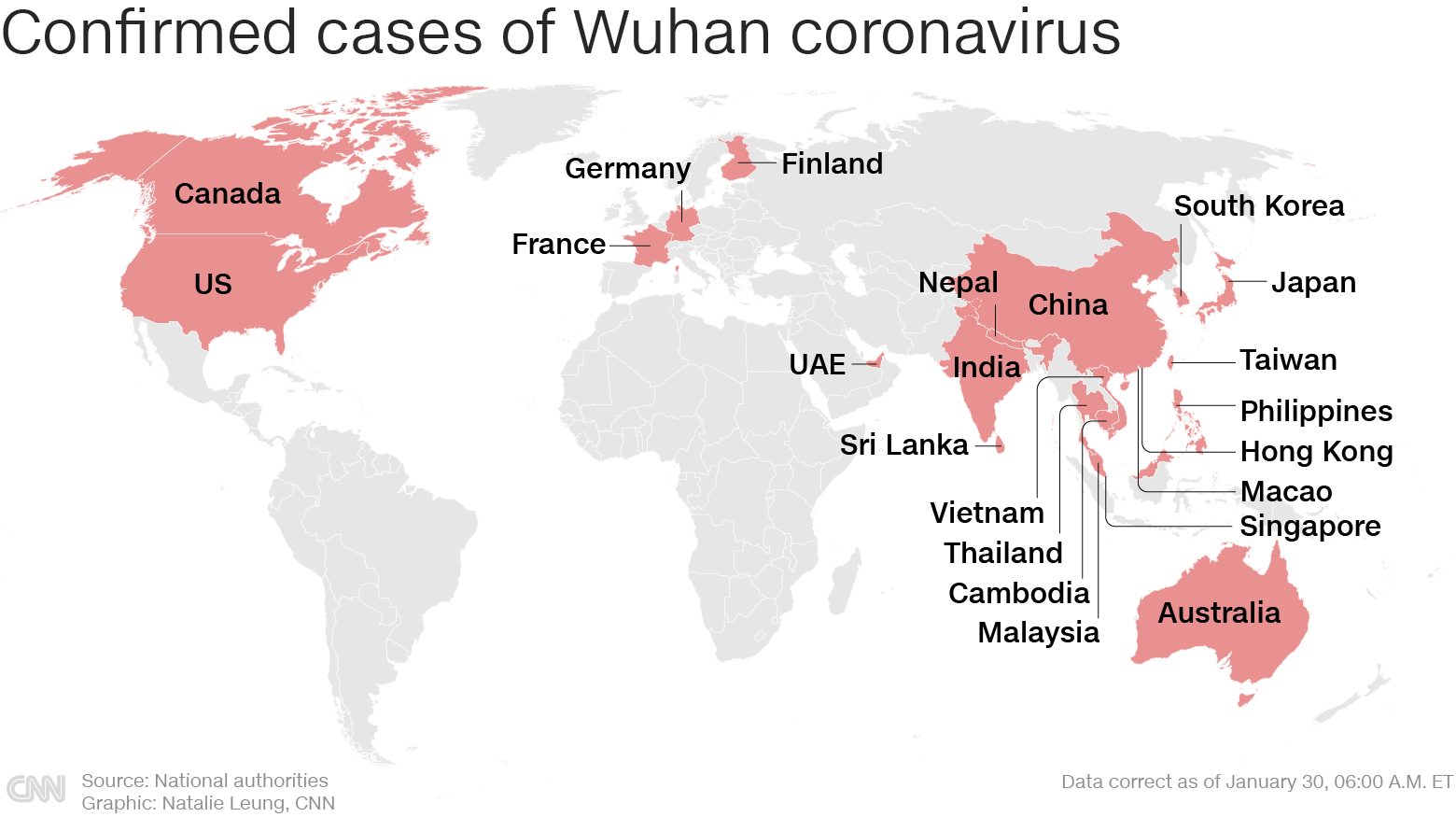 Beyond China, there are now more than 100 cases of the virus in 20 countries or territories.

The Wuhan coronavirus has sparked alarm around the world, but in Asia, it's also brought up memories of a deadly virus.

To many, the latest outbreak feels eerily similar to 2003, when severe acute respiratory syndrome (SARS) swept through the region, infecting more than 8,000 people and killing 774.

But while the Wuhan coronavirus and SARS are caused by a similar virus, they're not exactly the same. Here's how the two stack up.

Origin: Both the SARS and Wuhan outbreaks started in China -- and both are believed to have originated from wild animal markets.

Number of infections: More than 7,700 people worldwide have been infected with the Wuhan coronavirus since December. By comparison, there were 8,098 confirmed cases of SARS between November 2002 to July 2003. 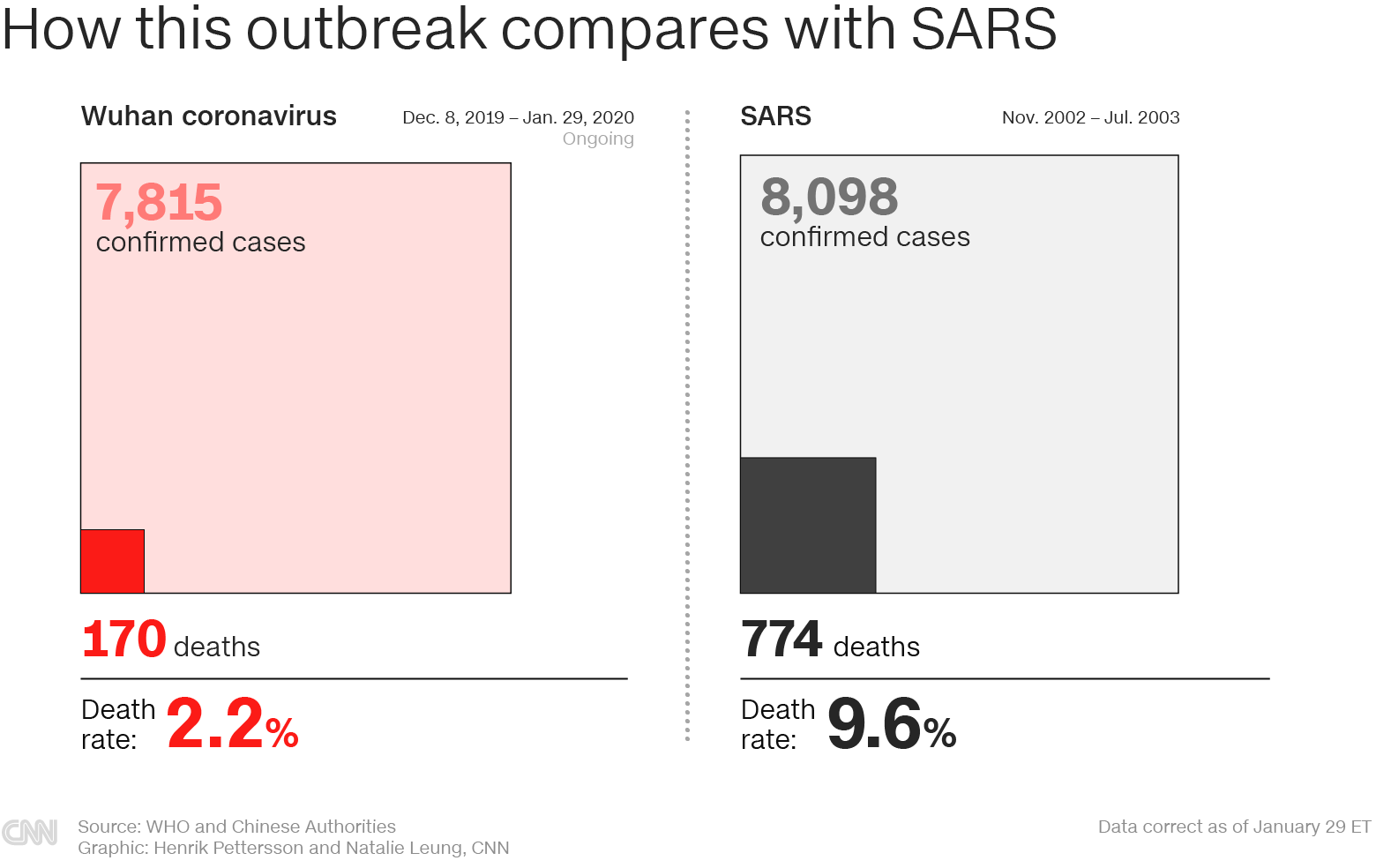 Number of deaths: 774 people died during the SARS outbreak, with the vast majority in mainland China and Hong Kong. This time, 170 people have died of the virus -- and so far, they have all been in mainland China.

Identifying the virus: One of the biggest differences between SARS and this current outbreak is how fast it was reported and how soon scientists were able to identify it. China informed the World Health Organization about the new virus on December 31, 2019, about three weeks after the first case was detected. The virus behind the outbreak was identified on January 7. Beijing was also able to identify the genome and informed other countries about it. Still, there are concerns that the scale of the problem may be far worse than the official figures let on.

Here's what travelers should know about the virus outbreak:

Check travel advisories: Several countries, including the US, UK and Canada are warning against all nonessential travel to Hubei province, or even to the rest of mainland China.

Airlines are suspending flights to China: Airlines based in Asia, Europe and North America are canceling flights to China. British Airways suspended direct flights between Britain and China on Wednesday. US carrier United Airlines announced that it has suspended flights from February 1 through February 8 between US hubs and Beijing, Hong Kong and Shanghai. Other airlines, including Lufthansa, Air Asia, Cathay Pacific, Air India and Finnair have similarly slashed or suspended service.

What you should do: Many US airlines have offered waivers on change fees or the option to cancel for credit on a future flight. Travelers with upcoming plans should check with their airlines and look for advisories posted on carriers' websites.

Most travel insurance is unlikely to cover this situation: Airlines are relaxing their policies and some major hotel chains are waiving cancellation fees, but recouping all the costs associated with trips canceled due to Wuhan coronavirus fears is far from guaranteed. An outbreak of a virus is not covered under most standard trip cancellation insurance policies, according to TravelInsurance.com.

If you cannot avoid travel to China: Those who can't delay travel should "practice enhanced precautions" by avoiding contact with sick people, animals and animal markets and frequently and thoroughly washing hands, the CDC recommends.The CDC advises washing hands often with soap and water for at least 20 seconds. An alcohol-based hand sanitizer can be used when soap and water are not available.

If you feel sick: Discuss travel to China with your healthcare providers, the CDC advises, noting that older adults and travelers with underlying health issues may be at higher risk.

Travelers who've visited China within the past two weeks and are feeling sick with fever, have a cough or difficulty breathing should seek treatment right away and call ahead to tell medical providers about recent travel to China and symptoms.

The CDC also advises potentially infected travelers to avoid contact with others, to not travel while sick and to be sure to cover your mouth and nose with a tissue or your sleeve (not your hands) when coughing or sneezing.

Read more on this here.

All football matches in mainland China starting from Thursday will be postponed due to the coronavirus outbreak, according to the country's governing football body.

"The Chinese Football Association will continue to maintain close communication with national authorities, to determine the timing of each event in this season based on the actual development of the epidemic situation at various locales. It will make reasonable adjustments to the system, schedule, and scale of some events when necessary," said a statement on the association’s website on Thursday.

The Chinese Super League is the top tier of professional football in China, and was originally scheduled to kick off on February 22.

South Africans in Wuhan, the epicenter of the novel coronavirus outbreak, have expressed frustration about their government's lack of evacuation plans from the city.

Several countries, including the US and Japan, have flown hundreds of their citizens out of the city.

No support: South African Pieter Viljoen, who traveled with a colleague to Wuhan for a business conference before the city's transport lockdown began, said the authorities in South Africa and its embassy in Beijing have not provided support or information about plans to repatriate them.

"We are not getting any real assistance. The only information from the South African embassy is that we must comply with local authorities. In terms of leaving Wuhan, there has been no effort or communication about evacuation," Viljoen said.

Life under lockdown: Viljoen said he has remained in his hotel, which has shut down operations partially since the movement restriction put in place to help check the spread of the deadly virus.

"You have only these small supermarkets where you can get food right now because of the complete lockdown. You can't move around from one district to another, so supplies are not readily available," Viljoen told CNN on telephone.

Feeling abandoned: South African Jessika Bailing says she feels neglected by her country's government. The 23-year-old English teacher, who moved to Wuhan last year, said while many countries are racing to get their citizens out of the city, authorities in South Africa were reluctant to make such arrangements.

"I've watched other countries' governments go above and beyond to evacuate their citizens and then we are faced with that kind of response from our government, how can one not feel abandoned?" Bailing said.

What does South Africa say?: South Africa's embassy in Beijing declined to comment on Viljoen's allegations and directed CNN's request for comment to the Department of International Relations and Cooperation (DIRCO).

DIRCO spokesman Clayson Monyela told CNN that the South African government and its health ministry was working on all requests. However, they must also consider travel and quarantine measures imposed by Chinese authorities to prevent the spread of the virus.

"We are not ignoring their plight, and we are quite aware of the need for speed to assist our citizens in Wuhan. We are liaising with the mission in Beijing to see how we can respond to the situation within the present context," Monyela said.

No plans to evacuate: Despite growing calls for repatriation, South Africa's Health Minister Zweli Mkhize on Wednesday said there were no plans to fly its citizens out as Chinese authorities have the outbreak under control.

"The Chinese government has assured us that there is no evidence to necessitate the evacuation of foreign nationals living in Wuhan city, and they have called for calm in this respect," Mkhize said.

He added that they have been assured by the Chinese government that foreign nationals who fall sick will be treated in the same way as Chinese citizens.

The Philippines has confirmed its first case of the Wuhan coronavirus, the country's Health Secretary Francisco Duque said in a statement Thursday.

The patient is a 38-year-old woman from China who arrived in the Philippines from Wuhan on January 21 via transit in Hong Kong, according to Duque.

The patient began experiencing coughing symptoms on January 25 and consulted doctors at a government hospital.

Officials at the Department of Health sent her samples to the Victoria Infectious Disease Reference Laboratory in Melbourne, Australia to be tested and it was confirmed on Thursday that the patient’s samples tested positive for the Wuhan coronavirus.

The Health Secretary said the patient is currently asymptomatic, showing no signs of fever or any other symptoms.

The Department of Health stressed it is “on top of the evolving situation” but urged the public to wear surgical masks and avoid crowded places if they are experiencing symptoms, such as coughing and a fever.

The Northern Mariana Islands has issued an emergency declaration banning all Chinese travelers from entering the US commonwealth for 30 days due to the outbreak of the coronavirus.

The “State of Significant Emergency” takes effect immediately and will remain for 30 days. Airlines are ordered to suspend travel of passengers “directly and indirectly from mainland China” while the emergency order is in place.

Approximately 700 mainland Chinese passengers per day arrive in the Northern Mariana Islands, according to the executive order.

Gov. Ralph Torres’ order notes that while the Centers for Disease Control and Prevention says risk of getting the virus in the US is low, the islands face a significantly greater chance of transmission.

The total population of the Northern Marianas, which include the islands of Saipan, Rota and Tinian, is under 60,000 people, according to US government statistics.

China's National Health Commission said Thursday that 1,370 people in mainland China who have been diagnosed with the Wuhan coronavirus are in severe condition.

The total number of confirmed cases on the mainland is now at least 7,711, most of them in Hubei province where the virus originated.

At least 170 people have died from the virus, all in mainland China.

UPDATE: A previous version of this map mapped coronavirus cases using raw counts instead of normalized rates. The graphic has been removed.