India's Ministry of Health and Family has confirmed the first case of coronavirus in the country.

The patient is a student in the southern state of Kerala and was studying at Wuhan University.

The ministry said in a statement that the patient tested positive for the virus and is in isolation in hospital.

No further details were given about the patient, such as age or gender, but the ministry said they were stable and being closely monitored.

India's first case will inevitably raise further fears over the global spread of the virus.

China and India currently account for about 37% of the entire global population of roughly 7.7 billion, with China currently home to about 1.4 billion people and India to 1.3 billion.

Officials in Toronto are becoming concerned about misinformation that is spreading about the Coronavirus in their community. The inaccurate information is creating “unnecessary stigma against members of our community,”

“I am deeply concerned and find it disappointing that this is happening. Discrimination is not acceptable. It is not helpful and spreading misinformation does not offer anyone protection. I understand that when there are uncertainties that people may worry. I want to remind people to check credible, evidence-based sources to get the facts when seeking information.”

Toronto Mayor John Tory, held a press conference on Wednesday to discuss the discrimination the Chinese community is facing. In a post on Twitter the mayor said, “Standing with our Chinese community against stigmatization & discrimination, and reminding residents that, as our health care professionals have informed us, the risk of Coronavirus to our community remains low. We must not allow fear to triumph over our values as a city.”

Tory went on to say in the presser,

I’ve been very troubled to hear of reports one as recently at lunch time today, of people treating our Chinese Canadian community differently. That they in some way, are being or should be shun or quarantined or suggesting Chinese businesses should be avoided. This type of thinking is wrong."

He added that such behavior was "entirely inconsistent" with the advice of our healthcare professionals.

It is ill-founded and in fact could lead to a situation where we are less safe because it spreads misinformation at a time when people are in more need than ever of real information and real facts,” said Tory.

The number of confirmed cases of the Wuhan coronavirus continues to rise around the world, with the Philippines and India only the latest countries to confirm the spread of the infection.

With the number of cases of the Wuhan virus at almost 8,000 worldwide, and over 170 deaths, the outbreak is on pace to overtake the 2003 SARS epidemic within hours. The number of confirmed cases in China is already greater than during SARS, which infected 5,327 people in the country and killed 349.

Worldwide, 8,098 cases of SARS were confirmed in 2003, with 774 deaths, a fatality rate of 9.6%. Thankfully, the Wuhan virus does not appear to be anywhere near as deadly, but the greater levels of infection, which experts don't expect to peak for weeks if not months, could see the death toll creep up to SARS levels as well.

Researchers at Imperial College London who have modeled the spread of the Wuhan virus based on available data from the first month of the outbreak have given a low estimate of 20,000 infections in China alone by the end of the month, with high estimates of over 100,000. With a fatality rate of around 2%, which experts agree appears to be the current level for the virus, that would translate to between 400 and 2,000 deaths.

SARS was a key test of the Chinese government at the time, and officials were widely blamed for failing to address the outbreak in time, censoring news of its spread and downplaying the severity. Several officials were sacked in the wake of the epidemic and China even publicly apologized to the World Health Organization.

While Beijing's reaction was infinitely faster this time, it was hampered by what appears to have been poor crisis handling at the local level, perhaps even a deliberate coverup. Failure to protect the country from another devastating disease outbreak -- combined with what is likely to be severe economic pain from the ongoing transport shutdowns and quarantines -- could blow back on Chinese President Xi Jinping, who has taken personal control of the response.

Wuhan is also a lesson to the world of what scientists have been warning about for decades. We are overdue a deadly pandemic and yet few governments are sufficiently prepared -- even Hong Kong, which learned the lessons of SARS the hard way, has run out of face masks and dithered for days over whether to shut its border. The Wuhan virus is not as deadly as SARS, and nowhere near as deadly as a true pandemic like the Spanish Flu, and yet may end up killing more people than the former.

In an increasingly connected, global world, a delay of days in tackling a disease can have major ramifications, as Wuhan shows.

The number of novel coronavirus cases is changing quickly. A real-time tracking map shows us just how quickly.

The map from Johns Hopkins University's Center for Systems Science and Engineering follows coronavirus cases across the world.

The clickable map pinpoints regions where patients have been diagnosed with coronavirus -- the more cases in a region, the larger its dot on the map.

The map tracks deaths, too, in total and by city.

With more than a dozen countries working to get citizens out of China amid the Wuhan virus outbreak, you'd be forgiven for being surprised that some want to stay put.

But that's what the ABC found when it asked some Australians living in Wuhan about the country's hugely controversial plan to fly evacuees to Christmas Island, site of a former immigration prison camp.

"We are not prisoners, how could they treat us in a detention centre rather than a proper medical facility?" one Chinese-Australian woman, who gave her surname as Liu, told the national broadcaster.

A Sydney woman, surnamed Wu, accused the government of racism.

"The Government wouldn't send its citizens to Christmas Island detention centre if those who are trapped in Wuhan were white Australians," she said. "As a mother, I feel so sorry to bring my daughters to a detention centre for the quarantine purpose."

Adding to the controversy, those Australians who are quarantined on Christmas Island may have to pay for the privilege. Both the ABC and the Sydney Morning Herald have reported that Australians in China have been asked to pay up to 1,000 AUD (around $700) a piece.

"We want to make sure we are protecting Australians both offshore and here as well," he said. "There are medical facilities on Christmas Island. People will be isolated from the rest of the Christmas Island community."

"Hundreds of millions of dollars have been spent on immigration facilities around the country," Dutton said, adding that the facilities there may be nicer than people expect. 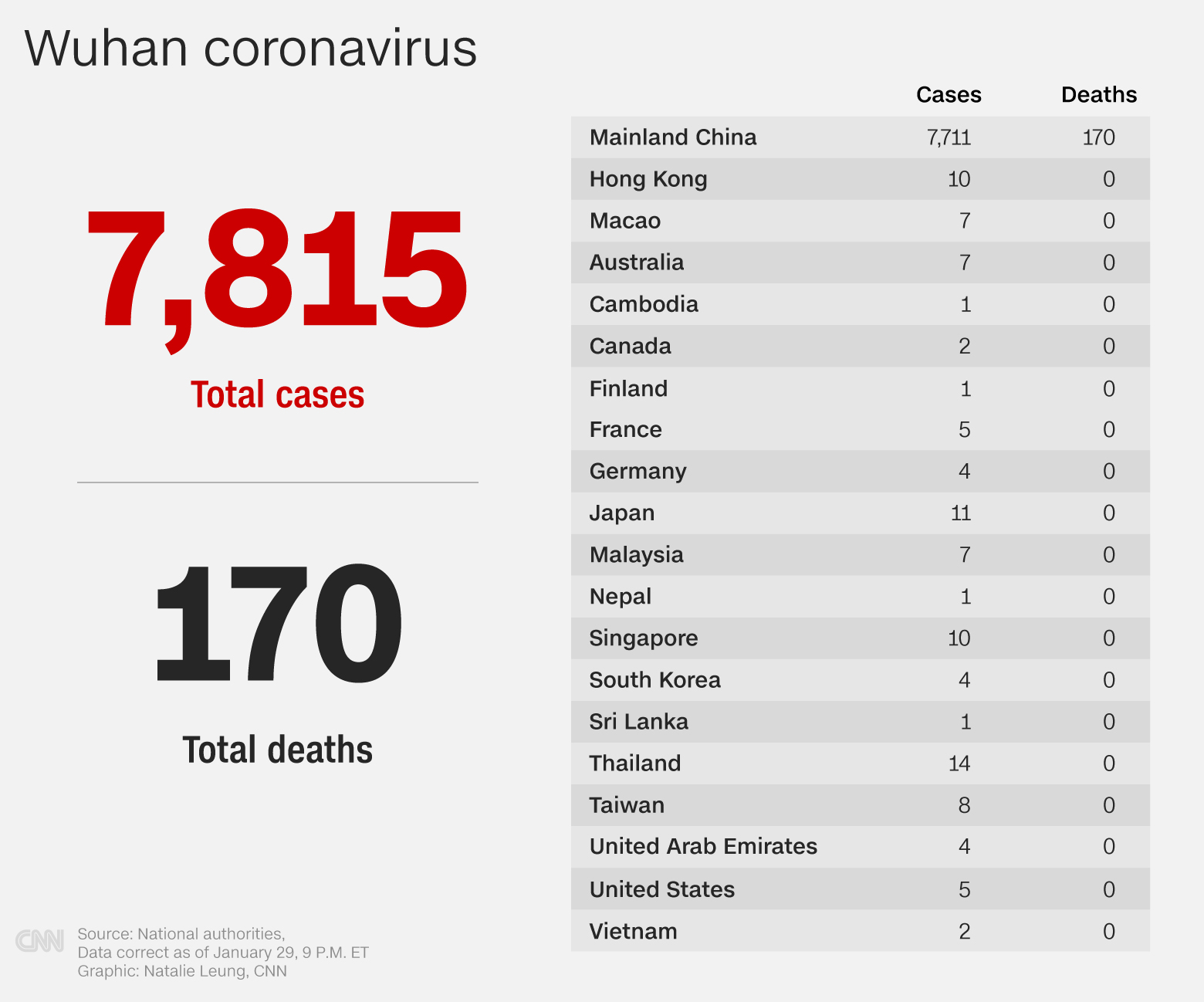 Since it was first discovered in December 2019, the Wuhan coronavirus has spread across the world.

Here's where the coronavirus has spread:

The South Korean government is sending $5 million worth of emergency humanitarian aid to China, the South Korean Foreign Affairs Ministry announced on Thursday.

Due to the urgent need of medical supplies in Wuhan to combat the outbreak of the coronavirus, the government is sending two million face masks, one million medical masks, and 100,000 hazmat suits and goggles in a plane, which will repatriate South Korean citizens from Wuhan.

South Korea will also send $300,000 worth of supply items to Chongqing city, near Wuhan, and is working with the Chinese authorities to organize the flights.

Hong Kong lawmaker Ann Chiang has clashed with her colleagues and a top medical official over whether you can clean and reuse face masks, as the semi-autonomous Chinese city faces shortages and long queues at the few shops still with masks in stock.

Speaking during a parliamentary session, Chiang, chair of the health services panel, asked Wong Ka-hing, controller of the government-run Center for Health Protection, "what if I can't buy any surgical masks?"

"The public do not have so many masks as you do," she told Wong, before asking if it "possible to sterilize them at home?"

"That doesn't work according to my understanding," Wong responded.

Chiang had earlier uploaded a video to Facebook showing how she steam cleans her own masks, and in a follow up post she defended the move as a possible last resort, pointing out that materials in the mask could withstand temperatures of over 140 degrees C, meaning 100C should not damage the masks itself.

According to public broadcaster RTHK, medical sector lawmaker Pierre Chan said the idea was "horrible," and "will destroy the structure of that surgical mask, it's very simple."

Whether surgical masks can be safely reused has been examined in the past. A report published in 2006 from the US Institute of Medicine said it could not find any means of cleaning disposable masks, including more sophisticated respirators, "without increasing the likelihood of infection." 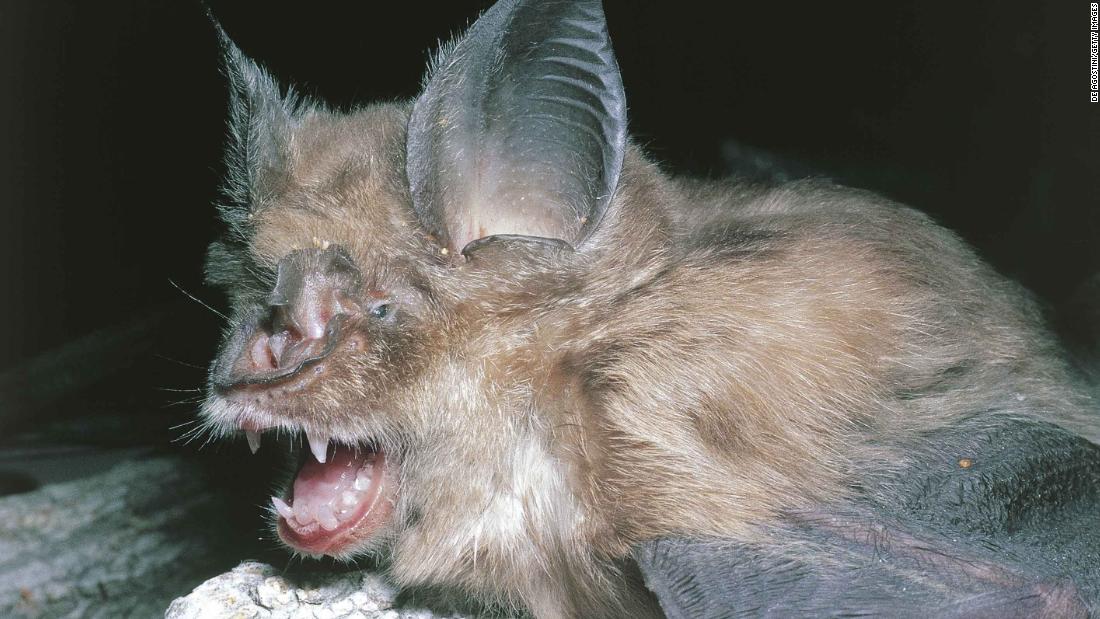 The bat has long been seen as a biological super villain.

"When you look at the genetic sequence of the virus, and you match it up with every known coronavirus, the closest relatives are from bats," said Dr. Peter Daszak, president of EcoHealth Alliance, an environmental health non-profit.

Professor Guizhen Wu of the Chinese Center for Disease Control and Prevention said in a study released by the Lancet medical journal on Wednesday that the data they had so far was consistent with the virus being initially hosted by bats.

Why the bat? The winged mammal has been the reservoir for several different deadly viruses like Marburg, Nipah and Hendra, which have caused disease in humans and outbreaks in Uganda, Malaysia, Bangladesh and Australia. Bats are thought to be the natural host of the Ebola virus, rabies, SARS and MERS, with the latter two both coronaviruses similar to the one that's now emerged in Wuhan.

Often, there's an intermediary involved as was the case with SARS in 2003 — the civet cat — and MERS, which emerged later in the 2000s and was carried by camels.

Flying could be why: One theory posits that flight, which is shared by all bats but no other mammals, has allowed bats to evolve mechanisms that protect them from viruses. Flying elevates the bat's metabolism and body temperature -- similar to a fever in humans and other mammals -- and scientists say this, on an evolutionary scale, could boost a bat's immune system and make it more tolerant of viruses.

Too early to really tell: It's too early to say for sure whether the Wuhan coronavirus originated in bats and whether an intermediary played a role. The outbreak was initially traced to a seafood market that sold live animals in Wuhan and scientists are working hard to trace the source both in the lab and in the field.