The Vatican has shipped hundreds of thousands of face masks to the Chinese provinces of Hubei, Zhejiang and Fujian in response to the coronavirus outbreak.

In a statement issued to CNN, Vatican spokesman Matteo Bruni said that the masks were sent "to help stop the spread of the contamination of coronavirus."

The initiative comes from the Office of Papal charities, the Chinese Missionary Center in Italy, with the help of the Vatican Pharmacy. The statement did not provide with a specific number of masks nor with specific dates.

The death toll from the Wuhan coronavirus has topped 360, and authorities in China and across the world are working to contain the disease.

China Eastern has become the first major Chinese carrier to suspend flights to and from the United States because of the escalating Wuhan coronavirus outbreak.

Since the outbreak of the virus, many international airlines have made significant changes to their flight schedules to China, or canceled flights altogether.

Who has suspended flights? Major international airlines such Air Canada, American Airlines, British Airways, Delta, Lufthansa and Qatar Airways have already suspended all flights to and from mainland China until the end of February or longer.

Who is implementing travel restrictions? A growing number of countries, including the US, Australia, New Zealand and South Korea, have begun barring entry to all foreigners who have traveled to mainland China, with Italy and Israel stopping all incoming air traffic from the country. Many more countries have told their citizens not to travel to mainland China.

Health officials Sunday announced three more cases of the coronavirus in California, bringing the state's total to six and the country's total to 11 cases. 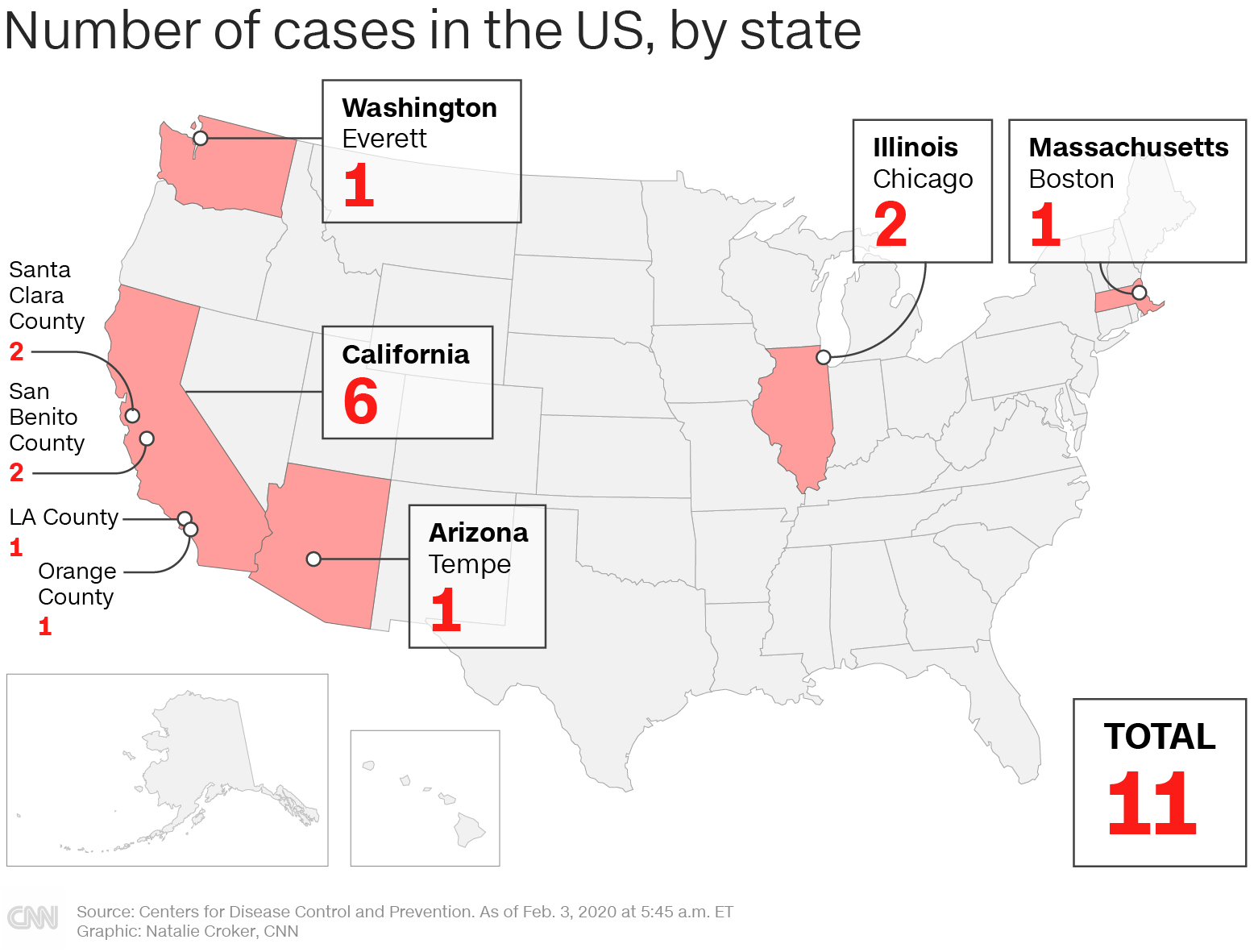 The US has issued a level 4 travel advisory warning residents not to travel to China, adding that most commercial air carriers have reduced or suspended flights to and from the country.

Vietnam has confirmed an additional case of the Wuhan coronavirus in the province of Vinh Phuc, bringing the total number of confirmed cases in the country to eight.

According to state broadcaster VTV, the latest case involves a Vietnamese national who returned home from Wuhan on January 17. The patient then had her samples taken for testing by the Ministry of Health on January 31, and officials confirmed that she had tested positive for the coronavirus on Monday.

Here's where else the virus has spread: 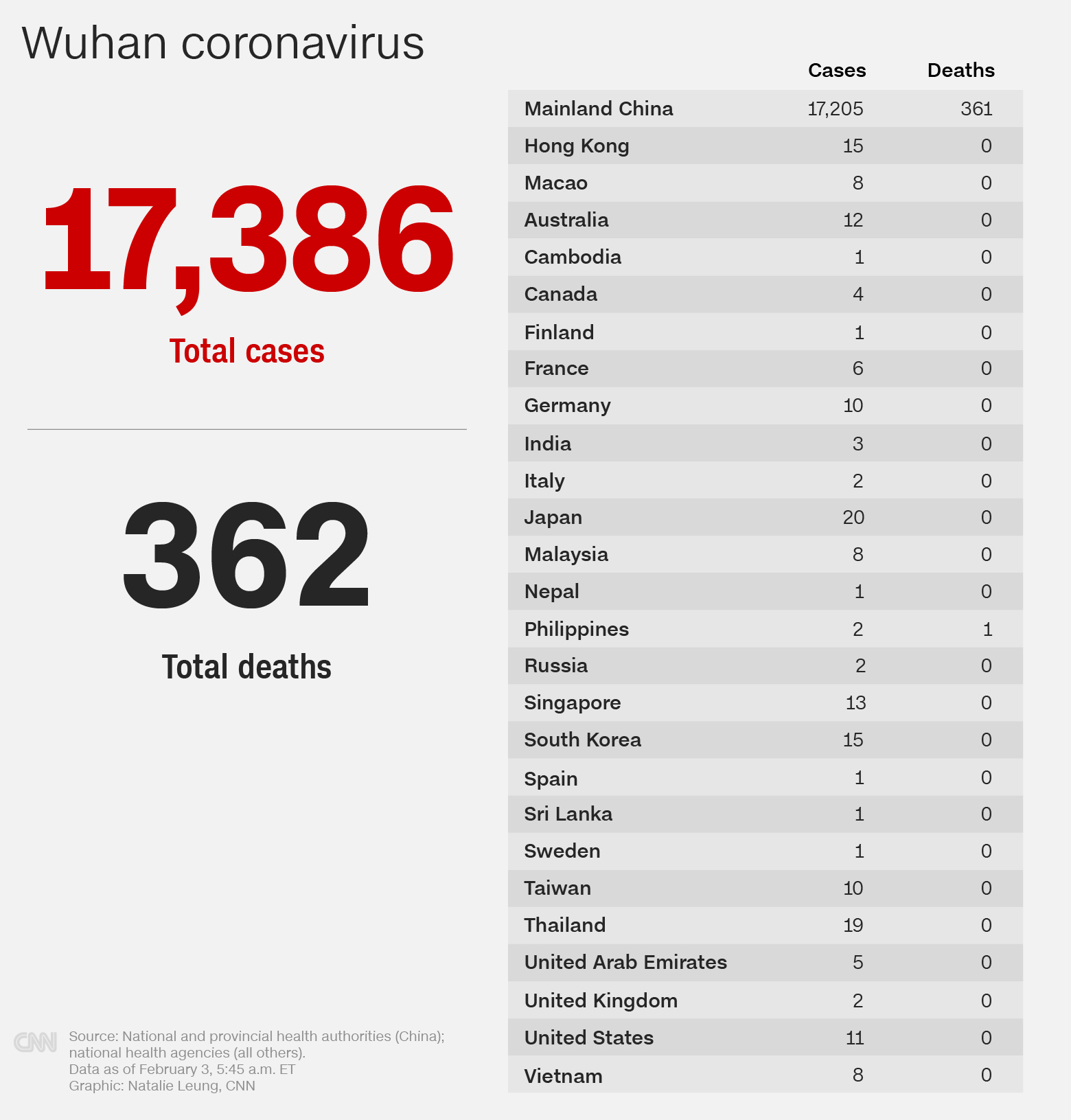 Two groups of Mexican students studying in China have returned home without symptoms of the Wuhan coronavirus, according to statements from the state of Guanajuato.

The groups consisted of 18 people who returned Saturday and 11 people who landed Sunday. In total there were 52 Guanajuato students studying in various Chinese cities -- all are expected to return by February 5, one statement said.

In compliance with World Health Organization protocols, health authorities will contact the students for the next two weeks to monitor any symptoms.

The UK Government has pledged £20 million ($26 million) to develop new vaccines for coronavirus and other infectious diseases, the UK Department of Health and Social Care announced Monday.

The new funding will go to the Coalition for Epidemic Preparedness Innovations (CEPI), which was originally formed in response to the Ebola epidemic in West Africa. It will help with three new programs to develop vaccines against the novel coronavirus, 2019-nCoV, the statement said.

Dr Richard Hatchett, CEO of CEPI said he hoped that an investigational vaccine could be through to clinical testing in 16 weeks

The rapid global spread and unique epidemiological characteristics of the virus are deeply concerning,” said Dr. Richard Hatchett, CEO of CEPI, who added: “Our hope is that, with our partners, we can get an investigational vaccine from gene sequencing of the pathogen through to clinical testing in 16 weeks. The earliest stage of clinical trials (Phase I), to establish the safety of investigational vaccines, would take around two to four months.”

TASS cites a federal law stating that a foreigner can be deported if their presence poses a real threat to public health.

Mishustin said that a national plan to prevent the spread of the coronavirus infection in Russia has been signed, and the virus has been added to the list of highly dangerous diseases.

It will allow us to deport foreigners if they are diagnosed with this disease and introduce special restrictions, including isolation and quarantine," the Russian prime minister said.

There are two confirmed cases of coronavirus in Russia, and the country has already closed its entire Far East land border to prevent the spread of the disease.

TASS reported that the movement of Chinese nationals through Russian territory has been restricted, and that those diagnosed with the disease have been isolated and are receiving the necessary treatment. Mishustin added that Russia has stopped issuing work and group tourist visas to Chinese nationals for the time being.

The Chinese government on Monday declined to comment on the delay of the second US evacuation flight to the epicenter of the coronavirus outbreak, after slamming Washington’s response to the epidemic as an overreaction that fanned global hysteria.

When asked by CNN if the delay of the charter’s arrival in Wuhan is related to Beijing’s displeasure over the US response, Chinese Foreign Ministry spokeswoman Hua Chunying said: “The US was the first to evacuate its consulate staff in Wuhan via charter flight. Relevant arrangements must be coordinated based on a variety of factors including Wuhan airport capacity to receive supplies.”

Hua confirmed that China has said it welcomes the US to join the World Health Organization (WHO) expert team on the outbreak and the US has submitted a list of names to the WHO.

In a globalized world, the destinies of all countries are closely linked. In the face of a public health crisis, countries should work together to overcome the difficulties, rather than resort to beggar-thy-neighbor practice, let alone take advantage of others' difficulties,” she said at a press briefing Monday.

Last Wednesday a chartered plane carrying some 200 US citizens -- including about three dozen diplomats and their families -- arrived at March Air Reserve Base in Southern California.