The US Centers for Disease Control and Prevention began shipping coronavirus test kits to state labs this week on Wednesday, the agency announced.

The tests, which can produce results in as little as four hours, will allow states to confirm their own cases of the novel coronavirus, rather than waiting for confirmation from the CDC. Previously, the CDC was the only lab in the United States able to test for the novel coronavirus.

“Our goal is early detection of new cases and to prevent further spread of the coronavirus,” CDC Director Dr. Robert R. Redfield said in a statement Thursday. “Distribution of these diagnostic tests to state laboratories, U.S. government partners and more broadly to the global public health community will accelerate efforts to confront this evolving global public health challenge.”

The CDC says will distribute about 200 test kits to domestic labs and another 200 to international labs. Each test kit can perform 700 to 800 patient samples.

The diagnostic is authorized to be used for patients who meet CDC criteria for testing, and by qualified labs designated by the CDC or certified to perform high-complexity tests. These include 115 US labs such as state and local public health labs and Department of Defense labs, as well as 191 international labs.

About the test: It’s known as a reverse transcriptase polymerase chain reaction test (RT-PCR) and can detect the virus from nasal or oral swabs when used with an existing RT-PCR instrument — the same one often used to test for seasonal influenza, the agency says.

Negative results do not preclude infection with the virus, the FDA noted in a press release, adding that negative results must be combined with clinical observations, patient history and epidemiological information. The FDA issued an emergency use authorization on Tuesday for the test, though it is not technically FDA-approved.

As of Wednesday, the CDC has listed a total of 293 people under investigation for the novel coronavirus in 36 states since January 21, according to an update posted to the agency's website.

There are 12 confirmed cases of the novel coronavirus in the United States. Six cases have been confirmed in California, one in Massachusetts, one in Washington state, one in Arizona, one in Wisconsin and two in Illinois. This includes two instances of known person-to-person transmission, one in Illinois and one in California.

Another medical facility designed to treat coronavirus patients has been built in Wuhan, the epicenter of the outbreak. The facility will open today, according to Chinese state-media.

“It's official! Leishenshan, another newly built hospital specially designated to treat #coronavirus patients, officially opened on Thursday. It will provide 1,600 beds where about 2,000 medical staff can work to fight the disease,” state-run Global Times said on its Twitter page.

One new hospital, Huoshenshan Hospital, was handed over to the military to begin operations on Monday. Both that hospital and this second new one were built in a matter of days. 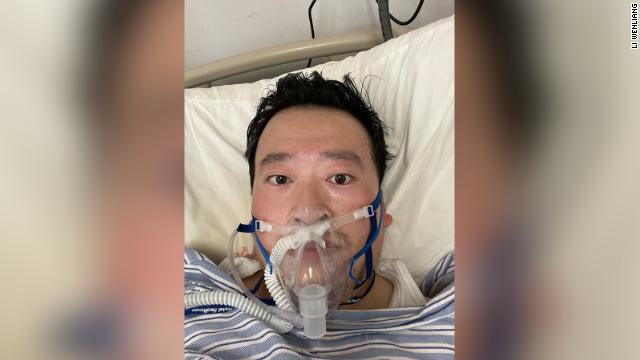 Editor's note:This story has been updated to reflect further reporting from Chinese state media and an official statement from the hospital.

The Chinese doctor who sounded early warnings about the Wuhan coronavirus is in a critical condition, according to the hospital treating him and several state media outlets. Hours earlier the same state media organizations reported that he had died.

Wuhan Central Hospital said on its official Weibo account that Li Wenliang, 34, had become seriously ill. "In the fight against the pneumonia epidemic of the new coronavirus infection, our hospital's ophthalmologist Li Wenliang was unfortunately infected. He is currently in critical condition and we are trying our best to resuscitate him," the statement read.

Following the initial reports that stated he had died, Chinese social media erupted with a mix of a profound grief and anger.

Li raised the alarm about the novel coronavirus in December, posting in his medical school alumni group on the Chinese messaging app WeChat that seven patients from a local seafood market had been diagnosed with a SARS-like illness and were quarantined in his hospital in Wuhan. Soon after he posted the message, Li was accused of rumor-mongering by the Wuhan police.

He was one of several medics targeted by police for trying to blow the whistle on the deadly virus in the early weeks of the outbreak, which has sickened more than 28,000 people and killed more than 560. He later contracted the virus himself.

The Global Times announced Li had died in a tweet at around 10:40 p.m. local time Thursday, linking to a report that cited friends and doctors at Wuhan Central Hospital. It deleted the post several hours later. Other Chinese media outlets also deleted their reports of his death, without explanation. The World Health Organization released a message of condolence following the initial reports that Li was dead but later updated their statement to say they did not have any information about the doctor's status.

The death toll and number of people infected by the Wuhan coronavirus continues to grow, with no signs of slowing despite severe quarantine and population control methods put in place in central China.

The number of confirmed cases globally stood at 28,275 as of Thursday, with more than 28,000 of those in China. The number of cases in China grew by 3,694, or 15%, on the previous day. There have been 565 deaths so far, all but two of which were in China, with one in the Philippines and one in Hong Kong.

In late 2019, reports emerged of a mysterious illness in China. It was later identified as a new type of coronavirus — and now, weeks later, authorities are still trying to stop the virus from spreading further.

According to Vietnamese state media, the two latest cases -- a 16-year-old and a 49-year-old -- are family members of a worker who recently tested positive for the virus after returning from Wuhan. Both patients are in a stable condition and in quarantine.

Three out of the 12 patients in Vietnam have been cleared and discharged from the hospital, according to state media.

Local authorities across all 63 cities and provinces in Vietnam announced that schools will continue to stay shut to allow schools to have time to disinfect classrooms.

The US ambassador to the UN in Geneva has urged the World Health Organization (WHO) to “engage directly with Taiwan public health authorities” in the fight against the coronavirus.

There are at least 13 confirmed cases of the virus in Taiwan, which is not a member of the UN or the WHO.

“For the rapidly evolving coronavirus, it is a technical imperative that WHO present visible public health data on Taiwan as an affected area and engage directly with Taiwan public health authorities on actions,” Andrew Bremberg told the WHO’s Executive Board on Thursday.

The WHO responded that it is “collaborating closely with Taiwanese authorities through the International Health Regulations mechanism in response to the 2019-nCoV outbreak.”

A spokesperson for the organization told CNN that the WHO “has received vital information from Taiwanese authorities and will be reporting back through established channels.”

The Chinese Grand Prix is in jeopardy amid growing fears over the spread of the coronavirus across China.

Race organizers are closely monitoring the situation and a final decision will be made by the Fédération Internationale de l'Automobile (FIA) and Shanghai Grand Prix organization.

A number of sporting events in China have already been postponed, canceled or under threat due to the threat of the coronavirus.

The Grand Prix is due to take place on April 19.

A third person has tested positive for coronavirus in Britain, the UK's Department of Health and Social Care said on Twitter. The patient did not contract the virus in the UK, Chief Medical Officer, Professor Chris Witty, said in a statement.

Elsewhere in Europe, one more person has tested positive for coronavirus in the German state of Bavaria, the region's health ministry has said, bringing the total of cases in Germany to 13.

The 3,600 passengers and crew members currently on the cruise ship World Dream, docked at Hong Kong's Kai Tak Cruise Terminal will continue to be held on board, health officials said Thursday.

"Before we complete the quarantine work all staff and passengers will have to remain on board," Chuang Shuk-kwan of the Department of Health said.

World Dream had docked at various different ports across China and Vietnam before arriving in Hong Kong. Dream Cruises has said it is attempting to contact passengers who had previously been on board the World Dream "to inform them of the situation and seek professional health assistance."