For the past 12 hours, Chinese social media has been flooded with tributes to the whistleblower doctor Li Wenliang, who died of the coronavirus last night.

There has also been a swell of almost unprecedented public anger against the government, and the country's censorship apparatus.

On Weibo, a Twitter-like platform, the hashtag "I want freedom of speech," drew more than 1.8 million views in the early hours of Friday morning, before it was censored.

Why this matters: This level of overwhelming, near-universal public fury has not been seen since the Wenzhou train crash in 2011, when authorities rushed to cover up the causes of a high-speed rail collision, even abandoning the search for survivors while many were still alive.

That incident became a lightning rod for frustrations about poor safety standards in China and the uncaring attitudes of the authorities, just as it appears Li's death will be a conduit for anger over a host of issues beyond the virus.

Chinese President Xi Jinping said the prevention and control of Wuhan coronavirus is at “a critical stage” during a telephone call with President Donald Trump today, according to the Chinese foreign ministry.

The two leaders spoke about efforts to contain the virus and Xi expressed confidence in defeating the epidemic, the ministry said in a statement.

Xi said he was hopeful that the US could “assess the epidemic situation in a calm manner” and “adjust response measures in a reasonable way,” the statement said.

The Chinese foreign ministry lashed out at the US earlier this week, accusing it of overreacting and feeding mass hysteria without providing assistance in the fight against the coronavirus in China.

Shortly afterward, the US sent supplies to China, authorities from both countries confirmed.

The director of Amnesty International criticized the death of Li Wenliang, the Chinese whistleblower doctor, as an indication of "human rights failings" in the coronavirus outbreak, which began in Wuhan, China.

“The case of Li Wenliang is a tragic reminder of how the Chinese authorities’ preoccupation with maintaining ‘stability’ drives it to suppress vital information about matters of public interest," said regional director Nicholas Bequelin.
“China must learn the lesson from Li’s case and adopt a rights-respecting approach to combating the epidemic. Nobody should face harassment or sanctions for speaking out about public dangers, just because it may cause embarrassment to the government.”

In late December, Chinese doctor Li Wenliang was targeted by police after trying to blow the whistle on the coronavirus outbreak. By late January, top medical officials were hailing him and other whistleblowers as authorities scrambled to contain the outbreak.

If Li's initial arrest was an embarrassment for the authorities, his death is a disaster that has sparked a censorship crisis.

Censors at a loss: As news of Li's death spread, Chinese social media was flooded with grief, rage, and calls for government accountability.

Those in charge of China's vast censorship apparatus, the Great Firewall, seemed at a loss over what to do. Forbidden topics relating to censorship and freedom of speech trended for several hours before being deleted -- rare evidence of indecision and confusion.

How he "died twice": In an apparent clumsy attempt to control the narrative, multiple state media outlets reported Li's death -- then deleted the reports. The hospital claimed Li was still being resuscitated, then confirmed later that he had died.

While it is possible that this was a mistake, the suggestion that censors' hands were involved was enough to spark fury online.

"A doctor had to die twice," wrote one user on the popular social media app WeChat. "That is national humiliation."

Australia will use a mining camp to quarantine patients suspected of having the Wuhan coronavirus, Prime Minister Scott Morrison said today.

The mining camp is located in Darwin, the capital of Australia's Northern Territory.

There is already a campsite on Christmas Island -- known for its notorious offshore immigration detention center -- being used to isolate suspected coronavirus patients. But the site there “does not suit the purposes” due to an “inability to properly segregate the people in the facility," said Morrison.

He added the government is currently consulting the local community in the Northern Territory on using the contingent campsite.

The Wuhan coronavirus has spread throughout the world since the first cases were detected in central China in December.

There are now more than 310 confirmed cases in more than 25 countries and territories outside mainland China: 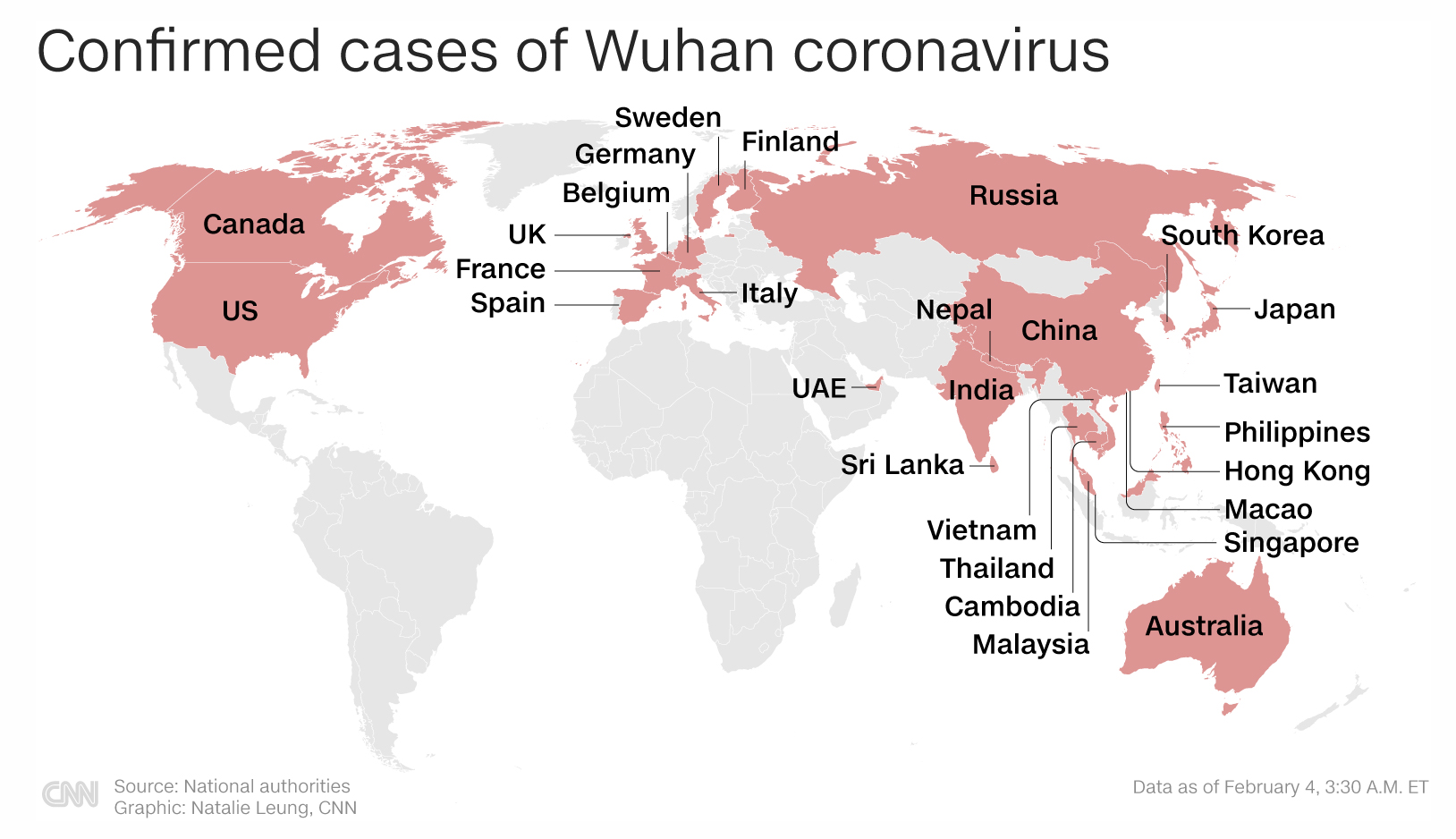 Here is how the reporting of Li's death played out over Thursday and Friday, local time:

Around 10 p.m. Thursday: News begins to circulate on Chinese social media that Li has died of the Wuhan coronavirus, prompting an outpouring of grief and anger online.

Around 11:30 p.m.: The World Health Organization (WHO) tweets that it is "deeply saddened" by Li's death.

It later deletes the tweet and clarifies that it has no information on Li's status.

12:38 a.m. Friday: Wuhan Central Hospital releases a statement saying Li hasn't died, but is in a critical condition and doctors are attempting to resuscitate him.

Around this time, the Global Times and People's Daily reports on Li's death are deleted.

12:57 a.m. Friday: Global Times says on its official Twitter that Li is "still under emergency treatment" and that his heart stopped beating at around 9.30 p.m. Thursday local time.

Around 2 a.m. Friday: The tide of emotion continues to grow on Chinese social media, with widespread calls for freedom of speech that are quickly deleted by censors.

3:48 a.m. Friday: Wuhan Central Hospital announces that Li died at 2.58 a.m. despite attempts to resuscitate him.

Around 4 a.m. Friday: The Global Times and then People's Daily tweet (again) that Li is dead. The Global Times references Li's role as a whistleblower who tried to raise awareness of the coronavirus back in December.

Early Friday morning: The top comments under the Wuhan hospital's announcement of Li's death show anger at the handling of the news. One post reads: "You think we've all gone to sleep? No. We haven't."

Toyota's plants in China will return to "normal operation" starting the week of February 17 and beyond, a Toyota spokesperson told CNN today.

Toyota had been planning to resume operations on February 10. Car plants across China have been closed for two weeks for an extended Lunar New Year holiday as authorities try to contain the virus.

The spokesperson added that the situation will depend on the supplies of various plants, also taking into consideration "the guidelines from local and regional governments, including things like logistics."

"We cannot definitively say whether we will restart plant operations from February 17 ... we are treating the week starting from February 10 as a period for our teams to prepare for the return to normal operation from next week and beyond," she said.

An additional 41 people have tested positive for the coronavirus on the cruise ship currently docked and quarantined in Japan's Yokohama Bay, bringing the total to 61 infections on board.

This is where the 61 people are from:

A statement from Princess Cruises said the Japanese Ministry of Health has confirmed this is the last batch of people on the ship to be tested.

Quarantined at sea: The ship will be quarantined until February 19 unless there are any other unexpected developments. There are more than 3,700 passengers and crew members on board.

Those quarantined on board will be provided complimentary internet and phone service to stay in touch with family and loved ones, cruise operator Princess Cruises said in a statement today.

"In addition, we have added additional live TV channels and a large selection of in-room movies available in multiple languages. The cruise activities staff is packaging games, puzzles and trivia and delivering them to guest staterooms," the statement said.