The newly unveiled Trump administration budget proposal includes steep cuts for global health programs and the World Health Organization, even as the world grapples with the spread of the novel coronavirus. However, it does increase its proposed funding for Global Health Security.

It also proposes a 34% overall cut to Global Health Programs.

It includes a proposed $115 million for Global Health Security aimed at enabling “the U.S. government, in partnership with other nations, international organizations, and public and private stakeholders, to prevent avoidable epidemics, detect threats early, and respond rapidly and effectively to disease outbreaks and other critical infectious disease threats (including anti-microbial resistance) in an effort to prevent them from becoming national or global emergencies.” This is an increase of $25 million from last year’s request.

Asked by CNN about the impact the WHO cut could have on the global coronavirus response, the Director of the Department of State’s Bureau of Budget & Planning downplayed the potential negative consequences.

“We believe that each of the international organizations has a need for greater accountability and efficiency,” Douglas Pitkin said during a briefing at the State Department Monday. “We have other mechanisms…for providing resources, targeted outreach and targeted efforts to reach specific diseases and health crises.”

Jim Richardson, the Director of US Foreign Assistance Resources at the State Department, said the US was the “largest donor overall to global health around the world.”

Deputy Secretary of State Steve Biegun claimed that the budget bolsters “country capacity to prevent, detect and respond to outbreaks and to prevent epidemics from reaching our borders.”

No one from the first group of Americans evacuated from Wuhan has tested positive for the novel coronavirus, according to Riverside County Health Officials.

"To date, no one has tested positive for novel coronavirus (2019-nCoV) among the 195 in quarantine. Two individuals with symptoms were retested and also found to be negative, and have since recovered," said Public Health Officer Cameron Kaiser, in a statement from the Riverside County Public Health Department.

The group of passengers arrived at the base on Jan. 29 after arriving from China. Many of the passengers work for the US State Department or are related to someone who does. They have been isolated from base personnel and were not permitted to leave the fenced quarantine area.

They have been on a 14-day quarantine that expires on Tuesday, and they will be free to leave March Air Reserve Base if they do not display any symptoms. 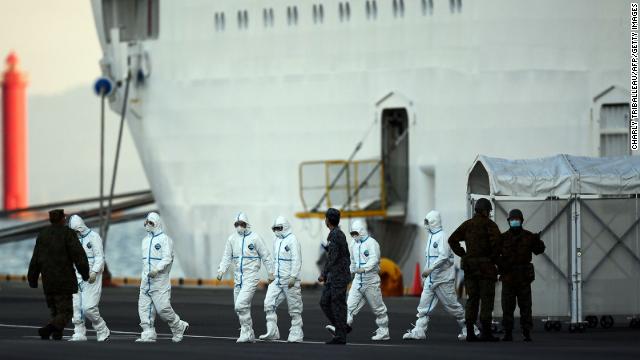 The total number of cases and deaths related to the Wuhan coronavirus continue to rise, as officials attempt to stop the virus from spreading.

Here are today's updates on the virus:

Health officials in Hong Kong are conducting a partial evacuation of residents from an apartment block following possibility that the coronavirus may have been transmitted via the building piping system, Professor KY Yuen said during an impromptu midnight press conference held on Tuesday morning local time.

Health officials have traced at least two confirmed cases of the coronavirus to the specific residential building called Hong Mei House in the Tsing Yi area of Hong Kong.

"As the pipeline that transfers feces is connected to the air pipe, it is very likely for the virus in the feces to be transmitted through the air fan into the toilet," Professor Yuen said.

Parts of the building were evacuated as a precaution while health officials and engineers carried out emergency checks, he added.

Professor Yuen said that the transmission route is not clear yet, so the evacuation was taken to protect the residents of the building.

Hong Kong now has 42 confirmed cases of the Wuhan coronavirus.

Two of the latest four coronavirus infections in the UK are healthcare workers, and British authorities are now “working urgently to identify all patients and other healthcare workers who may have come into close contact” with them, Public Health England Medical Director, Yvonne Doyle, said in a statement.

“As a result of our contact tracing we now know the new cases announced today are all closely linked to one another. Our priority has been to speak to those who have close and sustained contact with confirmed cases, so we can advise them on what they can do to limit the spread of the virus.
Two of these new cases are healthcare workers and as soon as they were identified, we advised them to self-isolate in order to keep patient contact to a minimum. We are now working urgently to identify all patients and other healthcare workers who may have come into close contact, and at this stage we believe this to be a relatively small number.
We would like thank all those who have followed public health advice and have taken the necessary steps to reduce the risk to the general public.” 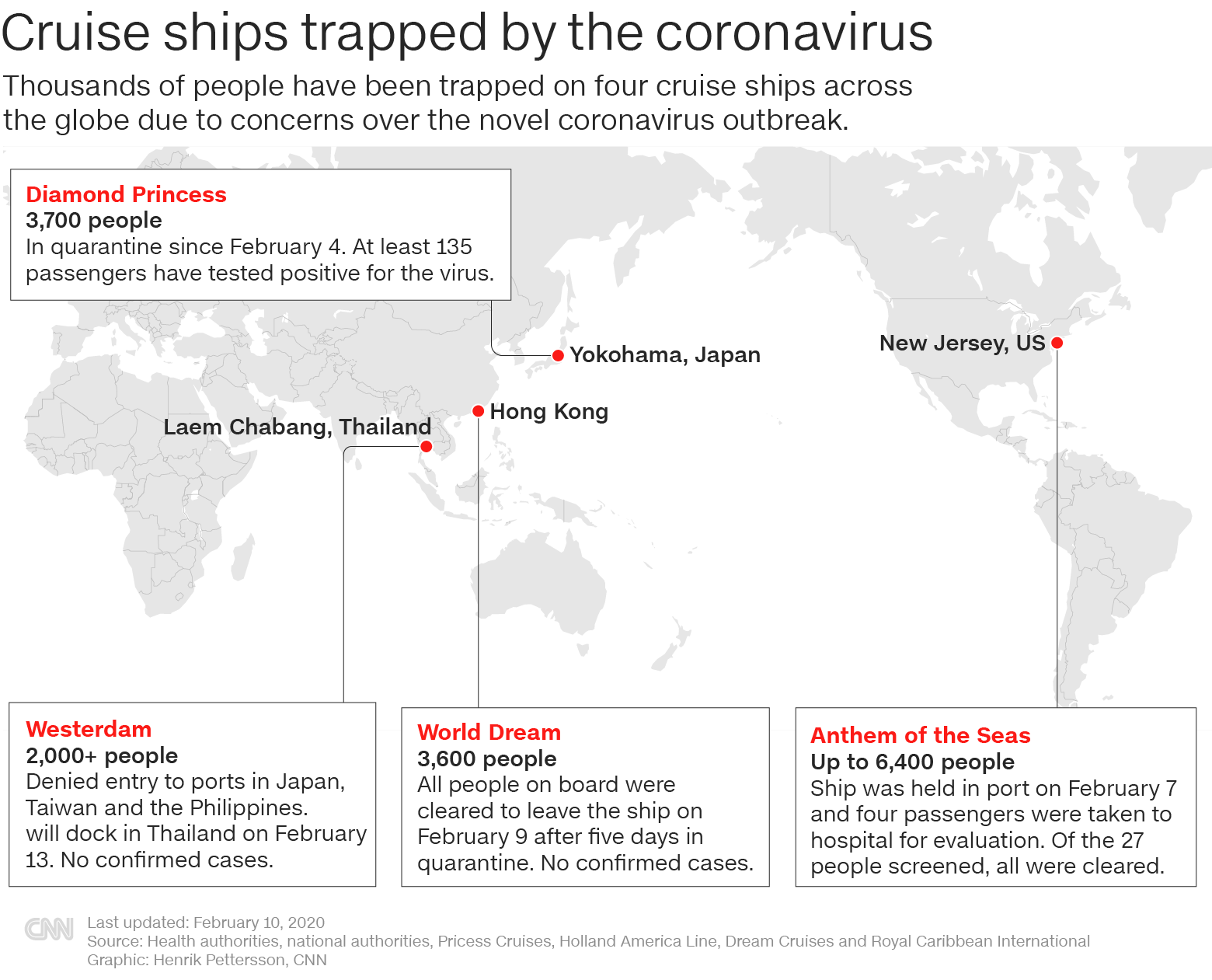 With travel advisories across the globe, four cruise ship were put in effective lockdowns over growing concerns of the novel coronavirus.

Here's what you need to know about each ship:

President Trump repeated his belief that a coronavirus outbreak in China could subside when temperatures rise with the changing seasons, despite expert opinion that it’s too early to make such a linkage.

Speaking to US governors at the White House, Trump said the temperature issue arose last week in his telephone conversation with his Chinese counterpart Xi Jinping.

“The heat generally speaking kills this kind of virus,” Trump said, citing an assessment Xi offered him over the phone.

“That would be a good thing,” Trump went on.

Earlier, Trump said “a lot of people think that goes away in April, with the heat.”

More on this: Trump first raised his theory about coronavirus and warmer weather in a tweet last week. Afterward, infectious disease experts told CNN that it's too early to say whether warmer temperatures would weaken the virus.

"It would be reckless to assume that things will quiet down in spring and summer," said Dr. Peter Hotez, dean of the National School of Tropical Medicine at the Baylor College of Medicine in Texas.

"We don't really understand the basis of seasonality, and of course we know we absolutely nothing about this particular virus," Hotez said.

"His hope is our hope," said Dr. William Schaffner, an infectious disease specialist at Vanderbilt University Medical Center, referring to Trump's tweets. "But we don't have knowledge that it will do that."

In his remarks at the White House, Trump said China was “doing a good job” containing the coronavirus, even as the disease spreads and the death toll rises.

Yesterday alone, the coronavirus — which originated in Wuhan — killed 97 people. It has killed 910 people globally since the outbreak began, according to authorities. More than 40,000 people have been infected.

The US Centers for Disease Control and Prevention has listed 398 people under investigation for the novel coronavirus in 37 states, according to an update posted to the agency's website on Monday. Of them, 12 have tested positive, 318 negative and 68 are still pending.

Trump touted those numbers on Monday, saying “many of them are in good shape now.”

There are now 42 confirmed cases in Hong Kong, according to The Center for Health Protection.

The latest case and the twelfth case lived in the same building, according to The Center for Health Protection's Dr. Wong Ka Hing.

"We noticed that it’s the Hong-mei Building Unit 7, which is the same building and same unit as a previous case, but they lived on different floors of the building," he said.

He added there are 10 floors between these two apartments.

Hong Kong officials are currently holding a late-night press conference on the coronavirus.

While coronavirus has spread to more than two dozen countries across the world, the vast majority of cases are in mainland China. 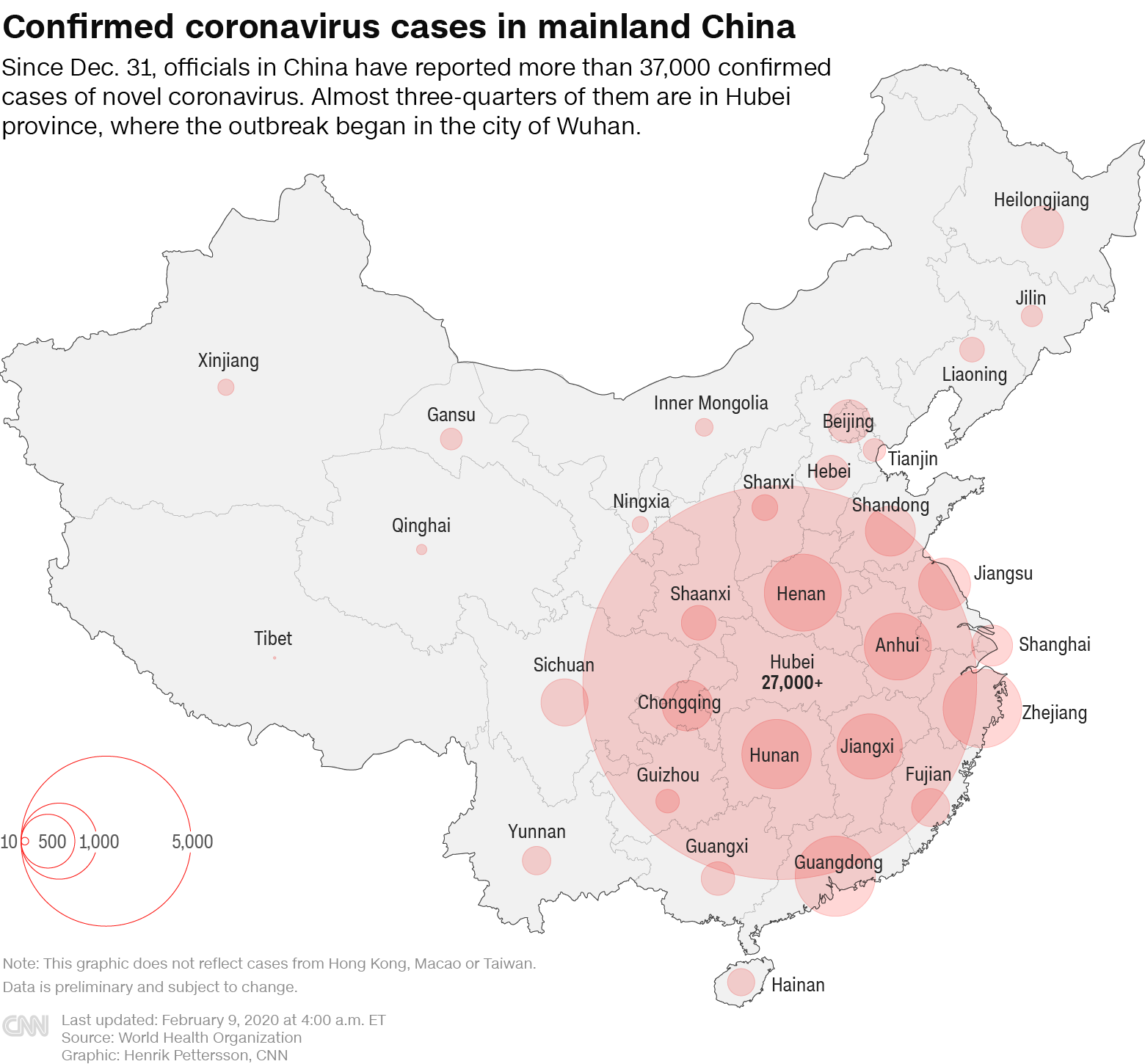