The Diamond Princess cruise ship, currently docked in Yokohama, Japan, will be released from quarantine on February 19, according to operator Princess Cruises.

More than 3,700 passengers and crew have been held on board the ship since February 4.

In a video statement released today, the company's executive vice president Rai Caluori said the "highest priority is providing guests and crew with their prescription medications, and more than 2,000 prescriptions have been brought on board."

He added that a team of seven pharmacists are assisting with the delivery of medication to guests.

According to Caluori, the 1,405 crew currently working on board the ship will receive "normal pay and gratuities and paid time off following the quarantine."

Japanese health officials have confirmed 175 cases of the novel coronavirus on the Diamond Princess -- the largest concentration of cases outside mainland China.

Staff at a Singapore branch of DBS Bank were evacuated from their office today after one employee tested positive for the novel coronavirus.

In a statement, DBS "confirms that one employee has been infected with the novel coronavirus" and that as a precautionary measure "we ensured that all employees on the affected floor of the Marina Bay Financial Center vacated the premises."

The bank added that it is currently conducting contact tracing with "all employees and parties the infected employee may have come into contact with."

Meanwhile, office spaces and common areas like elevators and bathrooms are being deep cleaned and disinfected.

Singapore currently has 47 confirmed cases of the novel coronavirus. 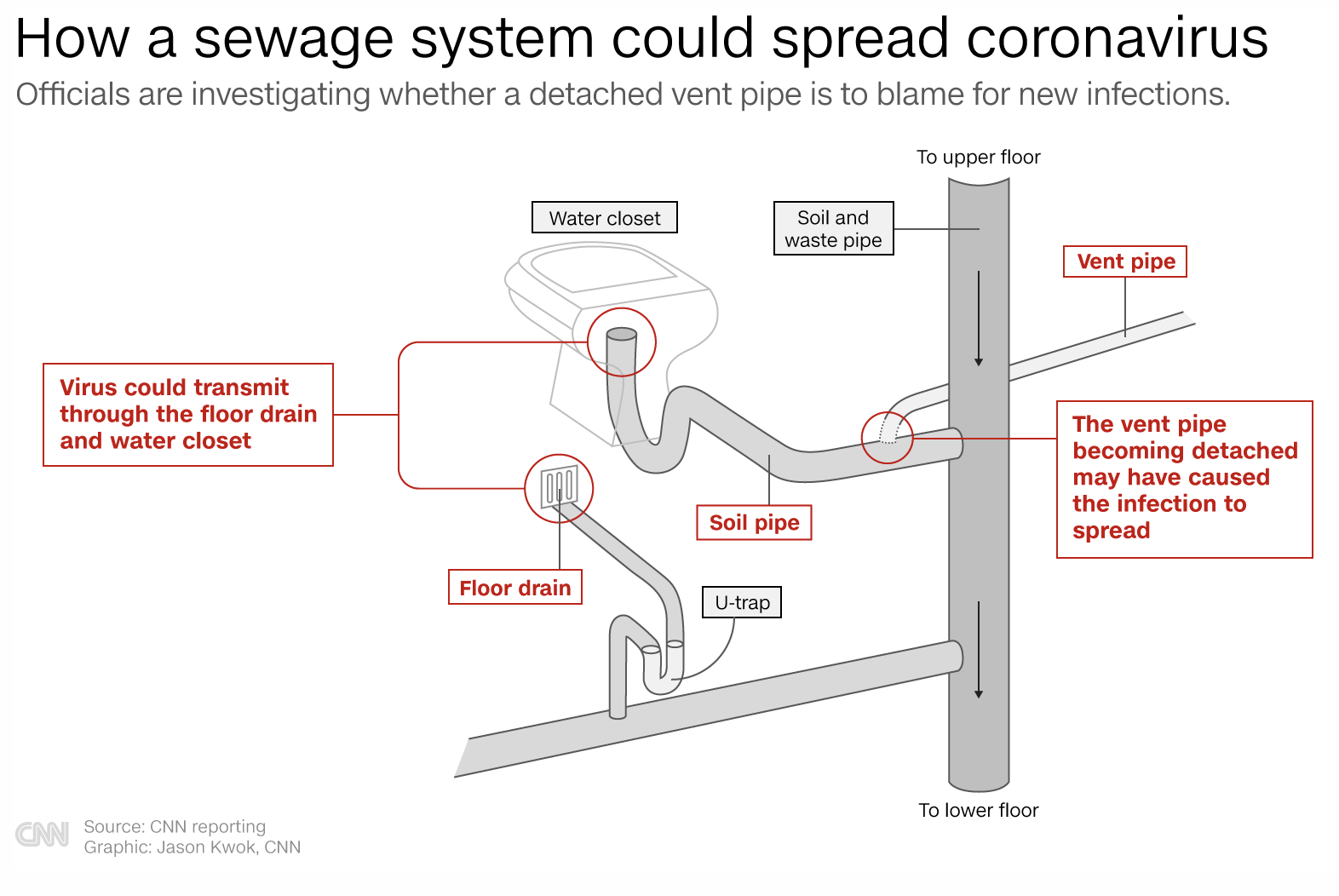 Yesterday, health officials in Hong Kong partially evacuated residents from an apartment block over fears the coronavirus may have been transmitted via the building's pipes.

Two residents living on different floors of the building had been infected, health officials said. Three more cases have since been linked to the same building.

This has happened before: During the 2003 severe acute respiratory syndrome (SARS) outbreak, pipes became a major source of transmission. At one housing estate, there were more than 300 infections and 42 deaths after defective plumbing allowed the virus to spread through the building.

Investigation underway: Scientists believe the coronavirus is mainly transmitted by direct contact -- such as touching someone's hand -- and through droplets, like when an infected person coughs on someone else.

But because the two patients lived directly above one another, and the initial inspection found that a pipe had been disconnected from the bathroom's waste pipe, authorities decided to investigate whether the virus could have spread through the building's sewage system.

Microbiologist Yuen Kwok-yung said at a news conference today that an improperly sealed pipe could have resulted in a virus transmission, by carrying infected feces into the building's ventilation system and blowing the virus into people's bathrooms.

How to protect yourself: While the investigation into the building continues, Hong Kong's Center for Health Protection has advised the public to maintain drainage pipes by regularly pouring water into drain outlets and to put the toilet lid down before flushing "to avoid spreading germs."

One of the eight confirmed cases of novel coronavirus in the UK is an accident and emergency worker at Worthing Hospital in West Sussex, according to the British Department of Health.

Worthing Hospital is about 11 miles (18 kilometers) from Brighton, where a general practitioner clinic closed because of the coronavirus.

The novel coronavirus has reached 27 countries and territories outside mainland China. Authorities continue strict emergency measures -- some of which have led to unforeseen consequences, like thousands of people stranded at sea with nowhere to dock.

The novel coronavirus began in December in the central Chinese city of Wuhan, Hubei province. Now, it's spread to 27 other countries and territories, and killed more than 1,100 people, the majority in mainland China. Take a look at how we got here:

A total of 10 Hong Kong residents in China's Hubei province have been confirmed infected with the novel coronavirus, the city's government said today.

The government said the 10 people were part of three families. Seven people are staying in Wuhan, the capital of Hubei and epicenter of the outbreak, and three are in Enshi, in the province's west.

"After being informed of the situation, we immediately tasked the Wuhan Economic and Trade Office (ETO) to render all possible assistance to the Hong Kong people concerned," said the Hong Kong government in a statement.
"Thanks to the efforts devoted by Wuhan ETO in coordinating with the relevant authorities, six of them have been admitted to local hospitals within a short time, while the remaining four have made their own way to seek medical treatment from hospitals. At present, all of them are being treated in local hospitals and are generally in stable condition."

Airbnb will extend the suspension of all bookings in Beijing until April 30, according to a statement from the company today.

"As efforts to control the novel coronavirus outbreak continue, we will comply with additional guidance issued for the industry during this public health emergency," the statement read.

All guests with canceled reservations will be refunded.

Airbnb had announced a Beijing suspension throughout February earlier this week, citing “official guidance that applies to all companies in the short term rental industry."

Editor's note: Frida Ghitis, a former CNN producer and correspondent, is a world affairs columnist. The opinions expressed here are hers.

The highly contagious virus is a minefield of ethical, political and moral dilemmas. That it emerged in China, a country ruled by an authoritarian, politically-repressive regime, wrapped the crisis in a uniquely chilling atmosphere.

Governments, public health experts and private firms are trying to figure out how to respond to the crisis, which has unsurprisingly created a multitude of tough decisions.

China's response: China's decision to put nearly 60 million people under lockdown in and around Wuhan is unprecedented and highly controversial. When a local doctor, Li Wenliang, tried to raise the alarm in December, authorities detained him and accused him of spreading rumors. He died of the virus last week.

Then a citizen journalist, Chen Qiushi, providing critical reporting from Wuhan, suddenly disappeared. Another citizen journalist was reportedly arrested on Monday amid reports of a growing number of arrests for criticism of the government's handling of the crisis.

But it's not just China's response that has raised questions. Whenever a contagion becomes so serious that the word "quarantine" becomes part of the discussions, the ethical cost of such prevention casts a shadow on every decision.

Quarantine quandary: Quarantine is a frontal assault on freedom. It literally deprives individuals of their liberties for the sake of the larger community, raising countless difficult questions.

How much power should authorities have over the daily lives of individuals? How much should individuals sacrifice for the sake of the community? How far should the state go in enforcing restrictions? Should people go to jail for violating a confinement to which they are forced because of no fault of their own? What to do when someone becomes ill on a ship holding thousands of healthy passengers? If you decide to keep the passengers on board, who will bring their food? How will they be protected?