Public health labs in five cities will begin using existing flu surveillance to look for the spread of the novel coronavirus, Dr. Nancy Messonnier, director of the US Centers for Disease Control and Prevention’s National Center for Immunization and Respiratory Diseases, said during a call with reporters today.

Messonnier said this efficiently leverages the existing influenza surveillance systems to track whether the novel coronavirus is spreading in communities within the United States.

The labs will test for the coronavirus in samples that are negative for influenza.

Results from this will provide an early warning to trigger a change in the public health response, Messonnier said.

There have been 15 cases of the novel coronavirus confirmed in seven states: eight in California; two in Illinois; and one each in Arizona, Washington, Massachusetts, Wisconsin and Texas.

The US Centers for Disease Control and Prevention lists 443 people as under investigation for the novel coronavirus across 42 states, according to an update posted to the agency's website Friday.

These numbers are cumulative since Jan. 21 and include people with travel history to China, as well as those who have been in close contact with confirmed cases or other people under investigation.

Two California cases and the Texas case are among evacuees from China.

This is an increase from Wednesday, when the CDC listed 420 people under investigation in 41 states, including 13 positive, 347 negative and 60 pending cases.

On Wednesday, China reported far fewer cases of the novel coronavirus than it did the day before, signaling that the spread of the virus could be slowing.

But the numbers were back up yesterday with China announcing a major jump in both new deaths and new cases.

There are many reasons we’re seeing this phenomenon, including variances in the incubation period and more people seeking treatment.

But one of the top reasons for the variation in numbers is the constantly changing definitions of what constitutes a case in China: Is it just when someone has a lab-confirmed test? Is it when they exhibit symptoms indicative of infection? Should someone who is asymptotic be counted?

The spike is partly due to a broader definition of what constitutes a confirmed case, to include people diagnosed on the basis of their symptoms rather than testing positive.

Keep in mind: This is normal.

“It’s normal during the course of an outbreak to adapt the case definition,” Dr. Sylvie Briand, director of the World Health Organization's Infectious Hazards Management Department, said during a news conference yesterday.

Here's a look at reported cases, according to World Health Organization data. Remember: These totals may differ from those reported by Chinese health officials, who report updated totals at different times than the WHO. 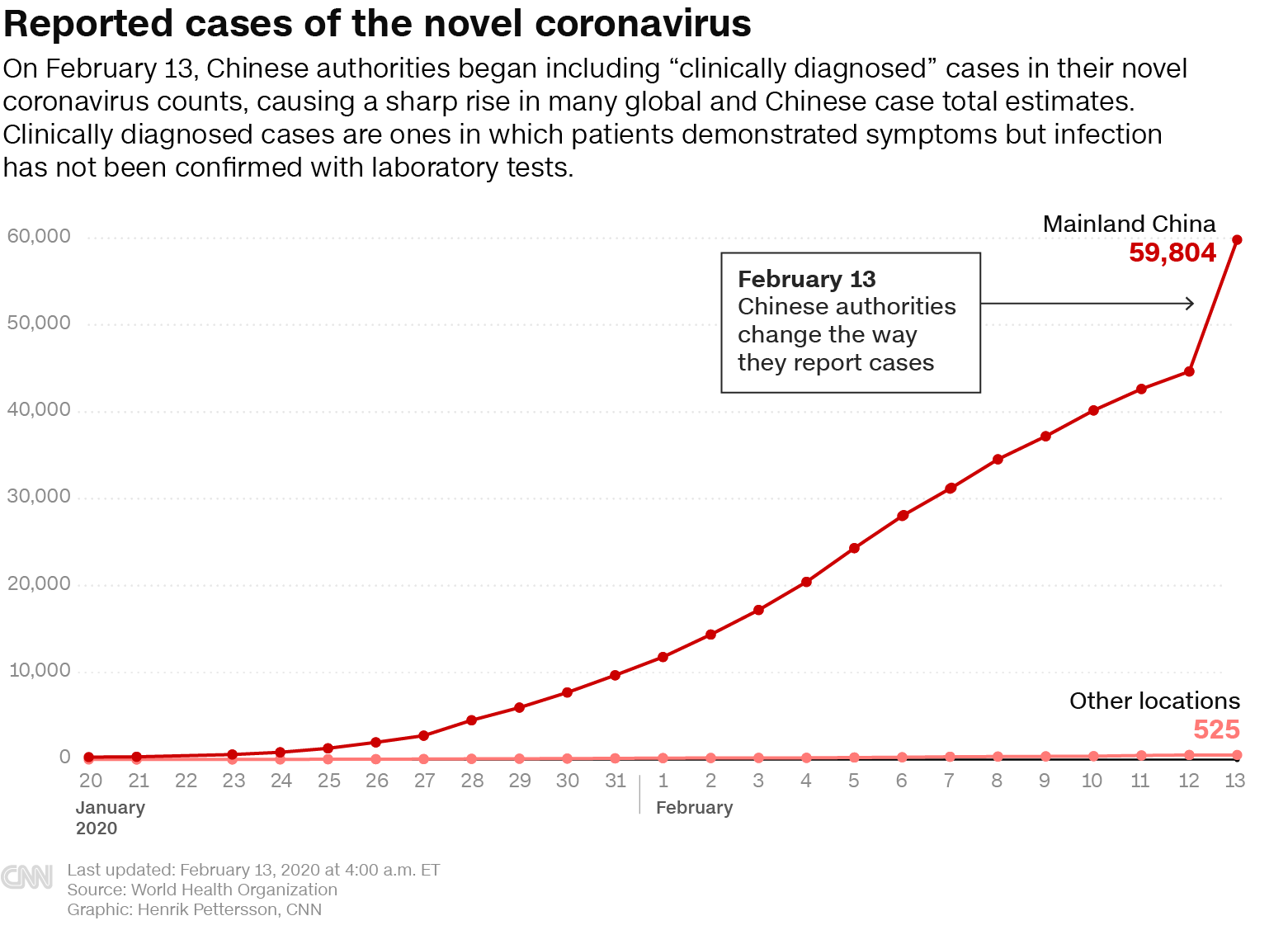 The World Health Organization has not yet had talks with Japan about potential impacts the novel coronavirus outbreak could have on the upcoming Tokyo 2020 Olympics this summer.

The Games are due to open in less than six months.

“At this stage, there has been no specific discussion or specific decision made regarding those mass events,” Dr. Mike Ryan, WHO executive director of Health Emergencies Programme, told reporters during a briefing today.

“We are very much engaged with those institutions and with those events, and we will and obviously offer them any support and technical advice regarding their own risk assessment,” Ryan said. “It’s not the role of WHO to call off or not call off any event. … We offer advice on risk reduction and risk mitigation measures.”

A German national in Spain's Canary Islands who had previously tested positive for coronavirus has since tested negative twice, and has been released from hospital quarantine, a spokeswoman from Spain’s Health Department confirmed today.

“The German citizen who had tested positive to the virus and was quarantined in La Gomera has tested negative twice in later tests. He has been released from hospital following the necessary protocols,” the spokeswoman said.

“He was always asymptomatic but was kept in hospital after testing positive to the virus in the first test,” she added.

According to the Health Department, five German nationals who had been traveling with the individual in question were also quarantined, but tested negative to the virus.

This now leaves only one person infected with the virus in Spain – in Palma de Mallorca.

The World Health Organization-led joint mission to China is expected to touch down this weekend, WHO Director-General Tedros Adhanom Ghebreyesus said today during a press conference.

The mission will include 12 international and WHO experts and a similar number of national expert counterparts from China, he said.

The experts will be reviewing data, in-depth workshops and making field visits in three provinces, among other plans. Ghebreyesus said they will stay as long as they are needed, depending on the scope of work. He said the members of the mission are experts in their fields, but declined to describe the makeup of the international team.

“The goal of the joint mission is to rapidly inform the next steps in the COVID-19 response and preparedness activities in China and globally,” Ghebreyesus said.

The US Centers for Disease Control and Prevention has offered to send experts to China, but that offer has not yet been accepted.

US Health and Human Services Secretary Alex Azar told CNN that the US US Centers for Disease Control and Prevention first offered to send experts to China on Jan. 6.

"It's dependent on the Chinese to make their decisions and facilitate that," Azar said. "The World Health Organization, we believe, has secured agreement to deploy a WHO team with our US public health experts as part of that team. We are ready to go and we are waiting for final clearance from the Chinese government to make that happen."

While cases of coronavirus have been reported in more than two dozen countries and territories across the world, the vast majority of cases — and deaths — have been in China.

Here's a look at where the cases are throughout mainland China, according to World Health Organization data.

Remember: These numbers may differ from those reported by Chinese health officials, who report updated totals at different times than the WHO. 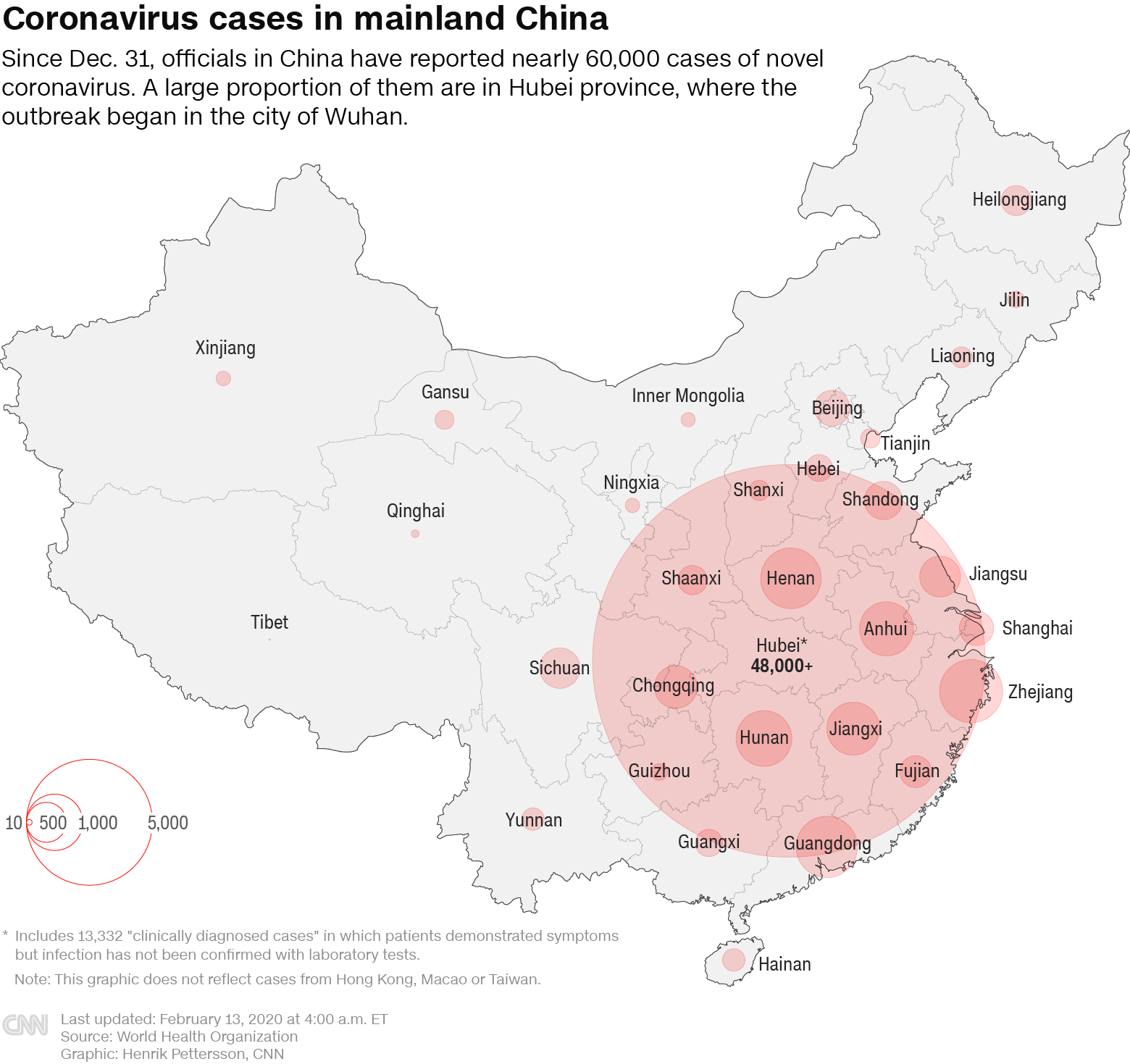 The United States has to be guarded in making any assessment, pro or con, about the numbers and facts coming out of China about the novel coronavirus, US Health and Human Services Secretary Alex Azar told CNN.

"Some of the data issues might just be the chaos of a public health crisis," Azar said, adding that it’s important for the World Health Organization to hold China to account for transparency and cooperation.

Azar reiterated the need to send experts from the US Centers for Disease Control and Prevention to China, but did not know when that would happen. The CDC first offered to send its experts to China on Jan. 6.

"It's dependent on the Chinese to make their decisions and facilitate that," Azar said. "The World Health Organization, we believe, has secured agreement to deploy a WHO team with our US public health experts as part of that team. We are ready to go and we are waiting for final clearance from the Chinese government to make that happen."

Azar defended the administration's policy that bans foreign nationals who have visited China in the past 14 days from entering the country, saying the Unite States has "limited public health resources" and needs to prioritize citizens who are returning from China.

“Once they have been out of China for that 14 day incubation period they are welcome, as always, into the United States,” Azar said.

US Health and Human Services Secretary Alex Azar said his department and the rest of the government is "working aggressively" to protect the health of Americans.

He said so far, the US has seen "very limited impact," but acknowledged that "that could change at any time."

Azar responded to President Trump’s assertion that the virus will dissipate as the weather gets warmer, saying teams are hoping that's the case, and planning as if it's not.

“What the President is saying is, we hope it will respond the way regular coronaviruses do and be heat responsive. But it also could just as equally respond the way SARS — a coronavirus adaptation — responds and continue in the warm season. So the President there was expressing his hope, and my goodness, I'm sure we all hope that it will have that type of epidemiological curve but we’re planning as if it won’t.”