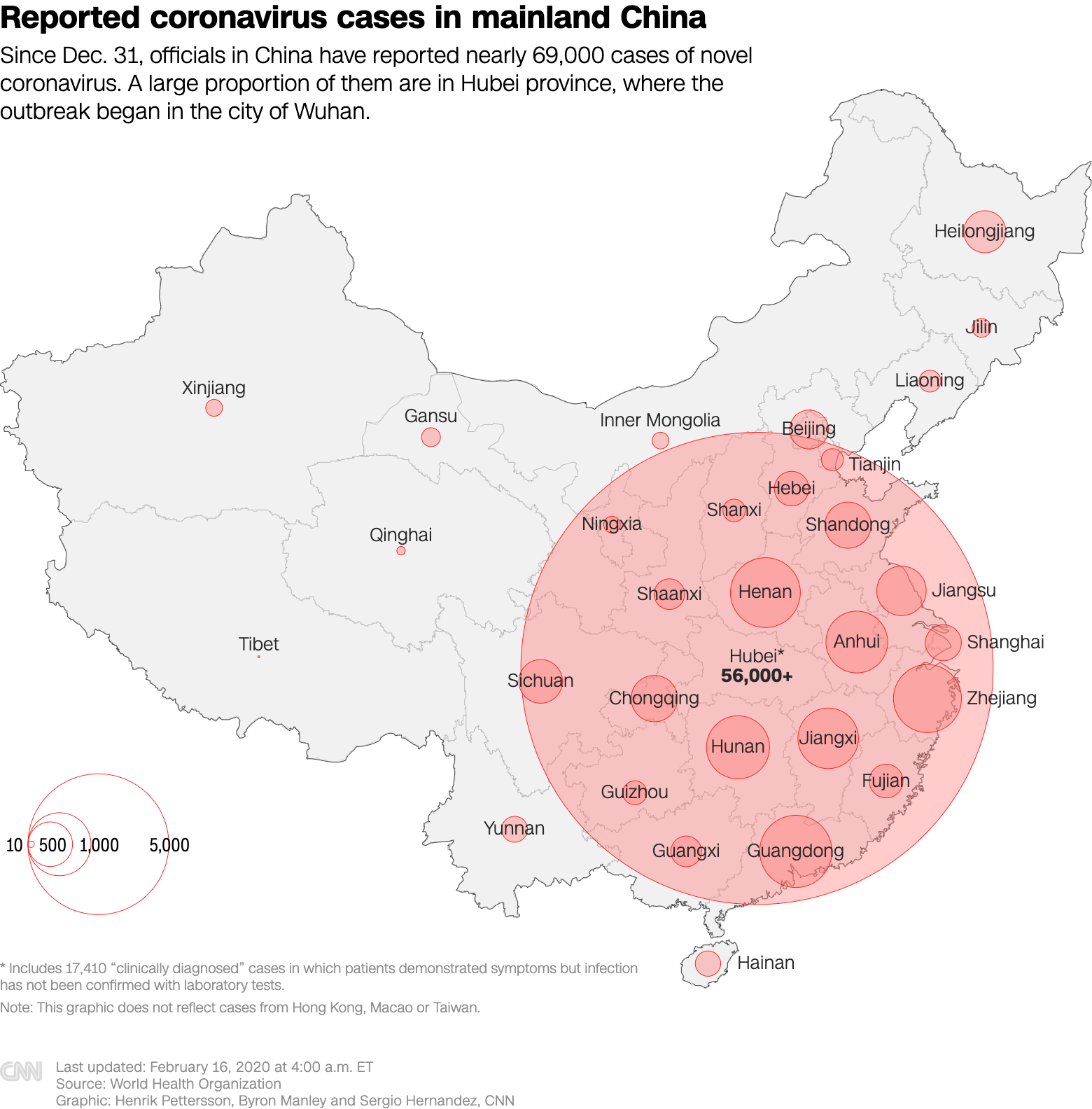 The operator of the Westerdam cruise ship, which was stranded for days at sea before it was allowed to dock in Cambodia late last week, said it would "investigate and follow-up" with individuals who had contact with a guest who tested positive for the coronavirus.

"We are in close coordination with some of the leading health experts from around the world," Dr. Grant Tarling, the Chief Medical Officer for cruise operator Holland America Line, said in a statement on Monday. "These experts are working with the appropriate national health authorities to investigate and follow-up with any individuals who may have come in contact with the guest."

An 83-year-old American woman who had been on board the Westerdam tested positive after she and her husband were both found to have symptoms when they landed in Kuala Lumpur after flying in from Cambodia. The husband tested negative.

Search for port: The cruise ship docked in Cambodia last week after being turned away from several other ports in Asia. Several governments feared passengers on the Westerdam could have been infected with the coronavirus because the ship had previouslu docked in Hong Kong.

The Cambodian government allowed the ship to dock last Thursday, and 1,455 passengers were allowed to return to their respective countries after they successfully passed through health screenings.

On Monday, Holland America said officials from the Cambodian Health Ministry were on board the ship testing the 255 guests and 747 crew that are awaiting clearance.

The cruise liner said that all 2,257 passengers and crew were screened for illness on February 10, and guests who disembarked in Cambodia underwent additional screening and checks.

A Russian woman who escaped a ward where she was under quarantine for novel coronavirus has been ordered back to the hospital, Russian state news agencies reported Monday.

Alla Ilyina fled the Botkin Hospital for Infection Diseases in St. Petersburg, where she was undergoing observation after returning from a trip to China. Local authorities subsequently filed suit, saying her escape broke quarantine regulations and potentially endangered the public.

Ilyina’s lawyer previously told CNN his client, who had undergone a mandatory 14-day quarantine period, had the right to return home.

The Tokyo Marathon will only be open to elite runners due to public health concerns about the novel coronavirus, according to an announcement by event organizers on Monday.

The race, scheduled for March 1, will only allow elite runners and elite para-athletes to participate. Members of the public who were eligible to run this year will be given a slot next year without having to enter the lottery.

The Tokyo Marathon lists 64 elite runners and 18 athletes listed in the “wheelchair elite” category on its website.

Organizers say 293,275 people entered the lottery for one of the 26,370 marathon spots for this year.

Cases in Japan: Japan has 513 confirmed cases of coronavirus -- the highest number outside of mainland China -- and one death. 456 of Japan's cases are linked to the Diamond Princess cruise ship, and 57 are on land.

A Russian passenger on board the cruise ship Diamond Princess has tested positive for the novel coronavirus, the Russian Embassy in Japan said in a statement on Facebook Monday.

During a medical examination carried out by the Japanese authorities for all passengers of the vessel for infection with COVID-19, the coronavirus was detected in a Russian citizen on board,” the statement read.
“In the near future, the Russian woman will be taken to the hospital, where she will undergo a course of treatment.”

The embassy said it would continue to provide Russian citizens with all necessary assistance.

The virus appears to survive for at least several hours on surfaces, according to the World Health Organization.

This is why buildings in affected areas are regularly disinfecting elevator buttons, door handles, and other commonly-touched surfaces -- and why people are worried about cash, which changes hands multiple times a day.

New measures: Chinese banks must now disinfect their cash with ultraviolet light and high temperatures, then store it for seven to 14 days before releasing it to customers, said the central Chinese government in a news release.

Cash that comes from high-risk infection areas, like hospitals and wet markets, will be "specially treated" and sent back to the central bank instead of being recirculated.

And in the central bank's Guangzhou branch, these high-risk banknotes may be destroyed instead of merely disinfected, according to state-run tabloid Global Times.

To make up for the supply, the bank will issue large amounts of new cash; in January, the bank allocated 4 billion yuan ($573 million) in new banknotes to Wuhan, the Chinese city where the outbreak began, said the government news release.

How dirty is cash? Each bill, passed person to person, samples a bit of the environment it comes from, and passes those bits to the next person.

The list of things found on US dollar bills includes DNA from our pets, traces of drugs, and bacteria and viruses, according to a 2017 study in New York.

That doesn't mean cash is dangerous to our health; disease transmission linked to money is rare, and no major disease outbreaks have started from our ATMs. But with new coronavirus cases being reported every day in China, the country's officials are taking no chances.