A plane carrying Ukrainian citizens and other nationals evacuated from Wuhan, China, arrived today at Kharkiv Airport in eastern Ukraine, the Ukrainian Ministry of Interior said in a statement.

The statement said border guards provided clearance for 94 people arriving on the special flight: 22 crew members and accompanying medical personnel, along with 72 passengers. The ministry said the passengers included 45 Ukrainian citizens and 27 citizens of other countries, including Argentina, Ecuador, the Dominican Republic, El Salvador, Costa Rica, Montenegro, Panama and Israel.

Ukrainian President Volodymyr Zelensky defended the move, describing security measures on the flight as “unprecedented.” Passengers on board the aircraft, he added, were all healthy but would be quarantined and monitored over a period of 14 days at a medical facility belonging to the Ukrainian National Guard in the town of Novi Sanzhary.

Video circulating on social media showed local residents in the town protesting the arrival of evacuees, blocking roads and confronting police. In a Facebook post, Zelensky called on citizens to stop “attempts to block routes, block hospitals, not allow Ukrainian citizens into Ukraine."

“The evacuees will live at the National Guard's private medical center in Novi Sanzhary,” he said. “It will be completely isolated and put into strict bacteriological safety. Within two weeks it will probably be the safest object in the country. I sympathize with our evacuees, because I already know what it is like to be under personal protection, and their protection will be much more serious than that of the president.”

There are currently no diagnosed cases of coronavirus in Ukraine.

US citizens who were on board the Diamond Princess cruise and tested positive for the novel coronavirus must be cleared per US guidelines before returning home, according to letters sent by the US embassy in Tokyo to these passengers.

These guidelines were sent to at least one American passenger who is still in Japan. The US began evacuating some passengers earlier this week.

In order to be eligible to board a US-bound flight, three key criteria must be met:

This is in line with existing guidance from the US Centers for Disease Control and Prevention on when to release patients from isolation in hospitals.

"You will not be cleared to travel simply by waiting 14 days,” the embassy specified. Fourteen days is the upper estimate of the virus�� incubation period.

These criteria are set by the CDC and the US Department of Health and Human Services. Carnival Corporation, which owns and operates the Diamond Princess cruise ship, has agreed to cover testing costs for these passengers if the Japanese government doesn’t, according to the letters.

After submitting test results to the CDC, passengers must wait to receive notification by a US embassy representative notifying them they are cleared to fly to the US.

For the rest of those aboard, CDC said on Tuesday that "all passengers and crew of the ship have been placed under travel restrictions, preventing them from returning to the United States for at least 14 days after they had left the Diamond Princess.”

John Haering and his wife Melanie were on a six-month world trip. He’d just retired. But shortly after the Diamond Princess quarantine began, John’s temperature spiked, and he was taken off the ship and into isolation in a local hospital.

Now, the couple are thousands of miles apart. Melanie isn't sick, but she’s in quarantine -- on a California military base -- one of several hundred Americans evacuated Monday on charter flights.

“There’s a strange feeling of loneliness that you’re by yourself, that there’s nobody else here to take care of you,” John told CNN.

Japan says its decision to quarantine the ship was the best option.

But the US Centers for Disease Control says people on board that ship during quarantine were of higher risk to catch the virus -- but the US didn’t evacuate its people for nearly two weeks after it began. Both John and Melanie are grateful the flights happened.

"If that were the case, I would be sitting in a U.S. facility with U.S. doctors. My wife would be there and I would get the best care that I possibly get on my home soil,” he said.

Japan announced 12 new confirmed cases of the novel coronavirus on Thursday, including two government officials who worked onboard the Diamond Princess cruise ship.

Both of the officials helped with administrative work onboard.

The remaining 10 new cases originated on land, according to the Japanese health ministry.

Among the cases on land is one taxi driver in Okinawa who drove a tourist from the Diamond Princess and has now tested positive. The vessel stopped at a port in Okinawa on February 1, just days before the coronavirus cases were confirmed onboard. 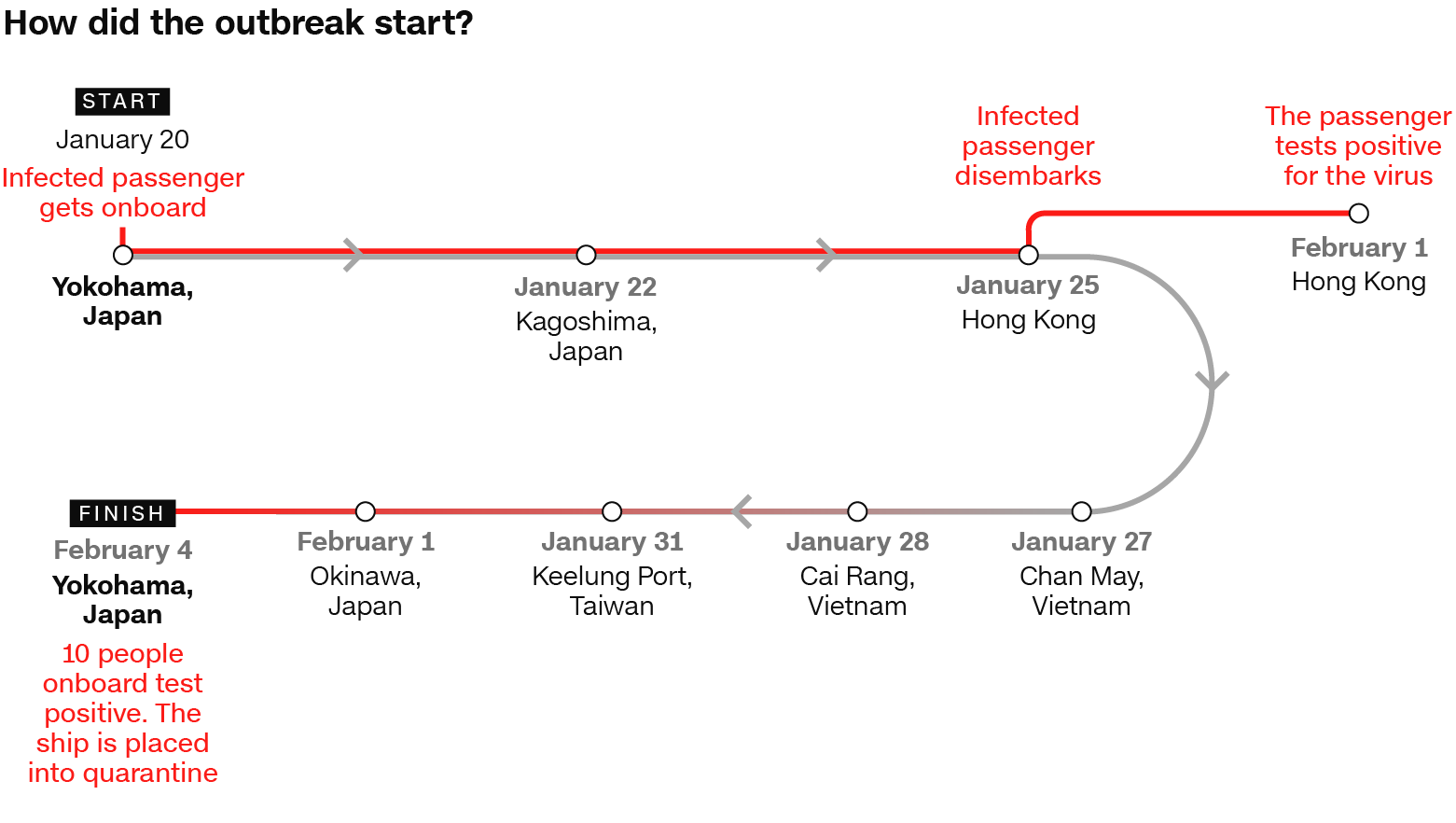 The total tally of confirmed coronavirus cases in Japan now stands at 78 on land and 626 on the Diamond Princess.

In a written statement, South Korea’s Blue House said that President Xi explained the Chinese government’s actions in response to the novel coronavirus and told President Moon that “the Chinese people has broken away from the initial fear and are seeing the prospect and hope of overcoming the infectious disease.”

President Moon thanked President Xi for China’s active cooperation during South Koreans’ repatriation from China on charter flights, the Blue House said, adding that the South Korean government would like to add to the Chinese efforts in combating the novel coronavirus.

The two leaders also agreed to share clinical treatment experiences and to strengthen cooperation between the countries’ quarantine authorities.

This appears to be partly due to a change in what is counted as a "confirmed case."

The total number of confirmed cases in mainland China is now 74,576, bringing the global total to 75,730.

Death toll rises: The number of people killed by the virus continues to rise, with 114 more deaths announced in mainland China today. In total, the global death toll is now 2,126.

Both passengers were in their 80s and had been in hospital in Japan, but no further information is known about them at this stage. A total of 626 cases of the coronavirus have been found onboard the ship.

Passengers depart cruise ship: Hundreds of passengers who have tested negative for the virus are due to leave the Diamond Princess today after two weeks in quarantine on board. Cruise goers from Canada and Israel will be among those allowed to leave Thursday.

South Korea infections jump: A patient has died in South Korea, and tested positive for coronavirus after their death, according to the country's Centers for Disease Control and Prevention (KCDC). The cause of death is still being investigated, a KCDC official said.

According to the KCDC, there have been 22 new confirmed cases, bringing South Korea's total confirmed infections to 104 on Thursday.

China stands by journalist expulsions: At his daily press conference today, Chinese foreign ministry spokesman Geng Shuang was asked multiple times about the decision by China to expel three Wall Street Journal reporters over a controversial opinion piece they were not involved with.

But Geng said there was only one Wall Street Journal and it had to bear the responsibilities of its actions. “Those media who blatantly insult China, pitch racial discrimination and maliciously smear China must pay their price," he said.

After two weeks in quarantine, 244 passengers disembarked from the Diamond Princess cruise ship in Yokohama, Japan, on Thursday, according to the Japanese Health Ministry.

These people had tested negative for the coronavirus, and were free to leave the vessel and travel.

The ministry also told CNN that it expected 800 passengers to disembark on Wednesday but only 443 left the ship. CNN previously reported 800 disembarked on Wednesday alone.

China says 29 of its confirmed novel coronavirus cases involve foreign citizens, according to the country's State Council Information Office. Ten of the cases are in Hubei, the epicenter of the outbreak.

Among the total 29 cases: two have died, 18 were discharged and nine are still in isolation, receiving treatment.

In a Thursday press conference, Lian Weiliang, an official from the State Council and National Development and Reform Commission, said relevant embassies or consulates have been informed about the infected foreign citizens.

Three additional coronavirus cases were confirmed in Iran on Thursday while five suspected others await examination, according to Iranian officials and state news agency IRNA.

Two cases were confirmed in the province of Qom, south of Tehran, and one other in the city of Arak, according to Jahanpour.

Additionally, new facilities have been set-up to counter the outbreak, the Iranian government spokesman Ali Rabiei said on Twitter.

Rabiei said that the government will follow up anti-coronavirus measures "with its full capacity and sensitivity."

The two deaths are the first linked to the novel coronavirus in the Middle East.

The virus has been contained after two people tested positive for the illness and later died of complications associated with their old age and frail health,” IRNA said quoting the dean of Qom Medical University, Mohammad-Reza Ghadir.