The Armenian government says it has closed its border with Iran, as several coronavirus cases spreading through the Middle East appear to have links with one Iranian province.

Armenia shares a 43-kilometer (27-mile) border with Iran, and has not yet reported any coronavirus cases.

Armenian government spokesperson Armen Khachatryan told CNN the border had been effectively shut since Monday and will be in effect for two weeks, but that some vehicles would be excepted.

“Of course, there will be some exceptions. No restrictions will be imposed on cargo transportations. Drivers shall be subject to special control, and a special procedure shall be applicable for the traffic of goods and commodities. There will be no restrictions on the repatriation of citizens on either side, that is, they can freely return to their homeland," he said, adding that some air traffic restrictions would also apply.

"During the next two weeks we will keep in close touch with Iran’s official representatives in order to have a more comprehensive idea of the situation, after which we will jointly decide what to do next.”

Greece has confirmed its first case of the novel coronavirus, a 38-year-old woman in Thessaloniki.

The woman, currently being treated in hospital, recently returned from an affected area in northern Italy and is in good condition, a health ministry spokeswoman told CNN. Authorities are checking whom she has been in contact with.

Northern Italy has become the European epicenter of the virus, with more than 320 cases and 12 deaths. Cases in Greece, Croatia, Austria, Switzerland and France have been linked to the Italian cluster.

The shock from the novel coronavirus has rocked global markets for a third consecutive day.

The spread of the virus could cost China, the world's second biggest economy, tens of billions of dollars in lost growth this quarter alone. Major outbreaks in Japan, South Korea and Italy underscore the risk posed to other big economies from the coronavirus.

Investors are concerned about how the coronavirus is weighing on consumer demand, manufacturing supply chains and major economies around the world.

Here's what markets are doing today:

European markets were sharply lower in early trading on Wednesday as corporate profit warnings added to fears about the economic impact of the outbreak.

The declines follow a terrible day in the United States, where the Dow finished 879 points, or about 3.2% lower. The index has now lost more than 2,000 points in total over the past four trading days. 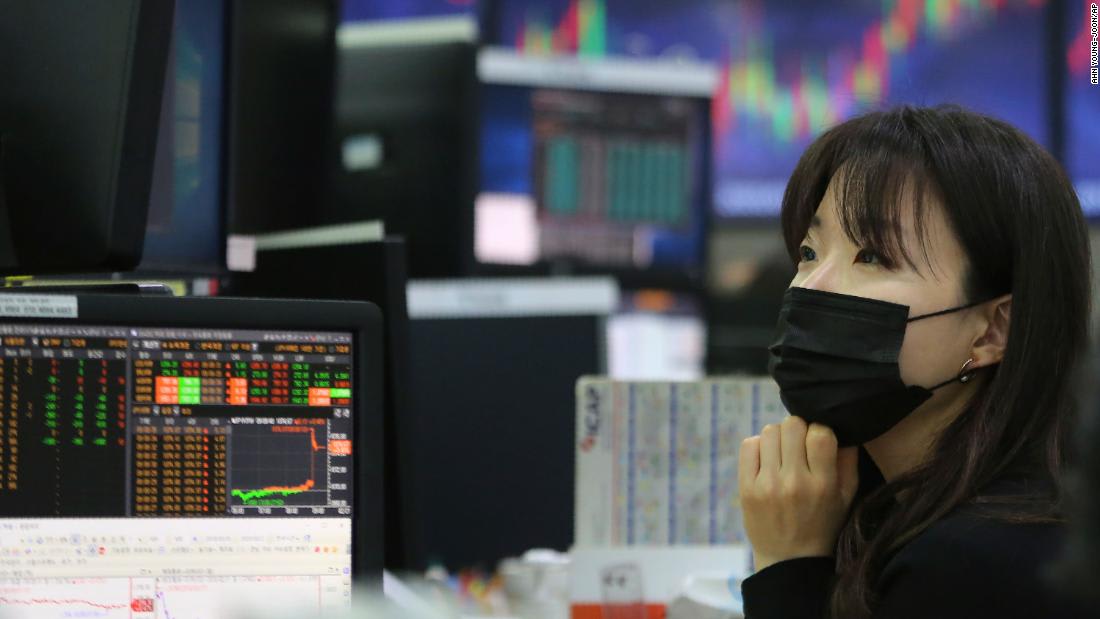 Iranian President Hassan Rouhani said Wednesday that the government will not impose quarantines on Iranian cities to contain the coronavirus outbreak in the country, state news agency IRNA reports.

Iran has the worst outbreak of the coronavirus in the Middle East, with 19 deaths and 139 cases recorded. In other parts of the world, the virus has had a death rate of around 1-2%, raising speculation over whether the number of cases in Iran might have been grossly underreported or if thousands of cases have possibly gone undetected.

Many cases in the Middle East appear to be linked to the Iranian province of Qom, where there are several religious sites frequently visited by Iranians and foreign tourists.

All cases reported in Bahrain, Kuwait, Iraq and the United Arab Emirates have a link to Qom.

In his comments on the virus, Rouhani criticized the United States, saying that the virus “should not become a weapon at the hand of our enemies,” the semi-official Mehrs news agency reported.

“Americans and our enemies have wanted to halt our production and economic activities in this two-year period now with their sanctions and propaganda.”

He said Iran cannot allow the US to stop the country’s social activities through the fear of the virus, adding, “Americans better take care of thousands of flu casualties in their own country,” according to Mehr.

An infected American soldier stationed in South Korea is being isolated in Camp Humphreys, a military base near the city of Pyeongtaek.

When CNN drove to the base today, there was a long line of cars waiting to enter, snaking up the hill and around the corner out of view.

Military personnel are also asked to "stay away from gatherings larger than 20 people."

A member of the United States Forces Korea told CNN she drove to the base at 6 a.m., waited for three hours, then gave up and went home.

Only two of the six gates are open, so extra checks can take place. These measures include car screenings, with passengers having their temperatures taken and asked health-related questions.

Only mission-essential staff will be on base tomorrow.

The CNN team wasn't allowed into the base. When they went into the nearby side streets for lunch, many restaurants were closed or deserted. There was hardly anyone on the streets.

The novel coronavirus began in December in the central Chinese city of Wuhan, Hubei province. Now, it's reached 40 other countries and territories, and is spreading in Europe and the Middle East.

Take a look at how we got here:

The South Korean government has also rolled out a new phone app, which requires travelers entering the country to self-diagnose themselves and report any possible symptoms.

A 60-year-old man in Paris has become the first French national to die from the coronavirus, director general of the French health authority, Jerome Salomon, told reporters Wednesday.

The man died at the Pitie Salpetriere hospital in the French capital, Salomon said.

Separately, two other new coronavirus cases were reported in the country, one of them a 55-year-old French man being treated in a hospital in Amiens. He is in a serious condition, Salomon said.

The other is a 36-year-old French man in Strasbourg. He had recently been in Lombardy, the Italian region where more than 250 cases of the virus has been confirmed.

Health officials in Hong Kong have confirmed four additional cases of the coronavirus, bringing the citywide total to 89.

The new cases include two passengers from the Diamond Princess cruise ship, a man linked with a previously confirmed case, and a domestic helper who was linked to a previous case.

One of the suspected cases is a 49-year-old woman, said Chuang Shuk-kwan of the Center for Health Protection today. The woman volunteered at a Buddhist hall; since then, 202 people with links to the hall have been contacted by authorities, and 32 have been quarantined. The rest are still being monitored.

A total of 24 people have been discharged from hospital, said health officials today. One patient remains in critical condition, and another 64 are still being treated in hospital.