Parts of Iran affected by the novel coronavirus have cancelled Friday prayers on the health ministry's advice, a decision made only in exceptional circumstances.

Iran is the worst affected country in the Middle East, with a significant cluster of infections and deaths in the province of Qom, which hosts several religious sites visited by local and foreign tourists. 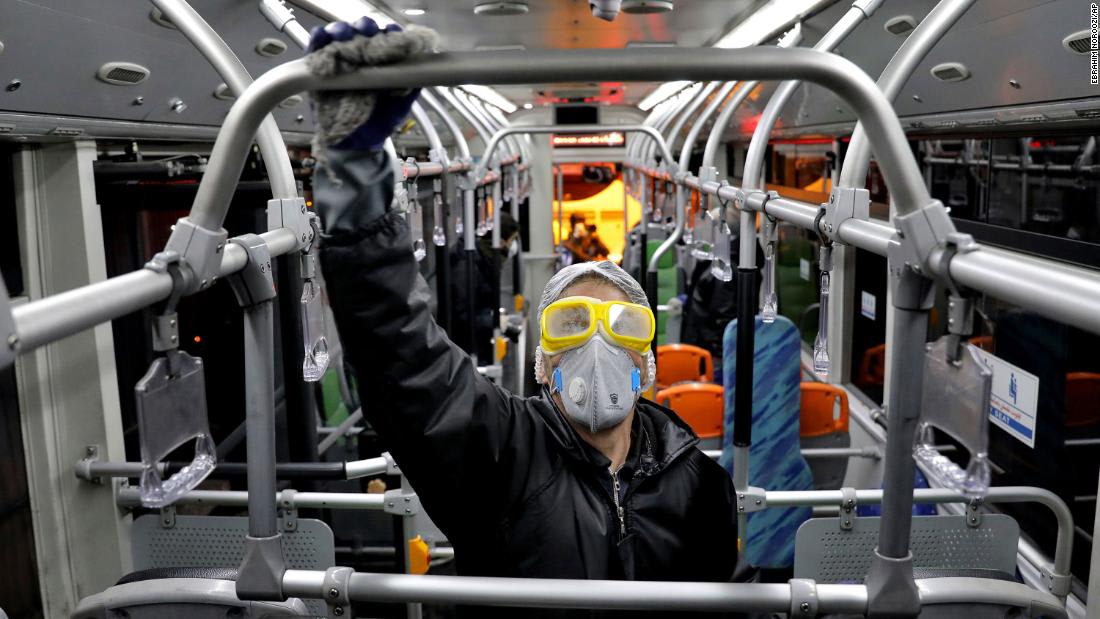 Iran was already struggling with one crisis. Now it has the worst coronavirus outbreak in the Middle East

Congregational Friday prayers are a mainstay of public life in Iran.

Across the Middle East, governments have been struggling to cope with the spread of the coronavirus. Iraq, for example, has closed schools, public offices and other public gatherings until March 7.

President Donald Trump is hoping for a "miracle" that will make the coronavirus disappear but tanking stock markets and signs the disease is stalking America are delivering their verdict on his scattershot management of the crisis.

A historic Wall Street sell off, the first case on US soil that could not be traced to travel to countries battling the virus, and news of drug shortages outpaced White House efforts to show everything was under control.

"It's going to disappear. One day it's like a miracle, it will disappear," Trump said at the White House Thursday as the virus marched across Asia and Europe after US officials said the US should brace for severe disruption to everyday life.

Controlling the narrative: An order for public health officials to clear all television appearances with the White House meanwhile raised the question of whether Trump will prioritize science as the threat from coronavirus rises or his own political standing. Meanwhile, sources told CNN that all media appearances have to now be cleared with Pence's office. The move could deprive Americans of sober, science-based advice from some of the best public health experts in the world.

Whistleblower: In a shocking report, The Washington Post revealed that health officials met Americans evacuated from Wuhan, China, the epicenter of the disease without proper training or protective gear, according to a whistleblower account.

California cases: California is monitoring 8,400 people for the virus and an announcement that the state has already confirmed its first case of community transmission further shook public confidence.

Contradictions: CNN has reported that Trump has been angered that government health experts have contradicted his attempts to downplay the threat from the virus by saying it is all but "inevitable" the US will be affected and there will be severe disruption.

The revelation will do little to quell suspicions that Trump is trying to suppress damaging information to pacify the markets and protect himself politically and gets to the fundamental issue of the administration's squandering of public trust.

Vietnam announced on Friday that it will suspend issuing visas to South Korean nationals.

The government said the measure aims to help Vietnam contain the spread of the coronavirus epidemic and limit the impact of the virus on its economy and society.

The Vietnamese government also announced that any other foreign nationals who have visited South Korea will be subject to a 14-day mandatory quarantine upon arrival.

South Korea has recorded 2,337 coronavirus cases -- the largest outbreak outside of mainland China.

As of Friday, Vietnam has 16 confirmed cases of the novel virus.

The coronavirus outbreak is continuing to spread across the globe, with cases reported in every continent except Antarctica.

In Asia, South Korea reached a grim milestone on Friday of more than 2,000 cases after it reported over 500 new infections for the second consecutive day.

The latest numbers: There are more than 83,000 cases around the world, including over 2,850 deaths. The vast majority of these are in mainland China, which has reported 78,824 cases and 2,788 deaths.

The deaths: Outside of mainland China, 71 virus-related deaths have been recorded:

South Korea spike: The East Asian country reported 571 coronavirus cases on Friday, bringing the national total to 2,337 cases -- the largest outbreak outside of mainland China. It has reported 13 deaths. Many of the cases are linked to a religious group in the country's south.

More cases in Italy: At least 650 people have tested positive for coronavirus in Italy, officials said. Across Europe, at least 11 countries now have confirmed cases of the virus, with many of the patients having visited the Lombardy region at the center of Italy's outbreak.

Stock markets plunge: A historic fall in US stocks on Thursday has caused shockwaves through Asia Pacific markets today, with drops in major exchanges across the region. It followed a record drop in the United States as the Dow dropped 1,191 points on Thursday, in its worst one-day point drop in history, while the S&P 500 posted its worst day since 2011.

Coronavirus in Africa: The first confirmed novel coronavirus case in Nigeria is an Italian citizen who traveled to Lagos. Nigeria is the third African nation to report the virus, and the first in sub-Saharan Africa. The others are Egypt and Algeria, which both have one case each.

Evacuations from North Korea: A plan is in the works to evacuate quarantined foreign diplomats from Pyongyang, North Korea, a source inside the country tells CNN. The date of the evacuation flight has not been confirmed, but the source says it will likely fly from Pyongyang to Vladivostok, Russia.

Countries report first cases: Lithuania, Belarus and New Zealand reported their first cases overnight. The Lithuanian patient is a woman who is experiencing “mild symptoms." The Belarus case is a student from Iran, while New Zealand's case is "a person in their 60s, recently returned from Iran." Meanwhile, France reported two new cases and Hong Kong one case on Friday.

Artists cancel gigs: K-pop group BTS have canceled four shows in Seoul in April, and American rock band Green Day have called off their upcoming Asia tour over the coronavirus.

Other closures: Hyundai Motor is suspending the operation of a plant in Ulsan, South Korea after one of its employees tested positive for the virus. Meanwhile Tokyo's Disneyland and DisneySea are closing for two weeks because of the virus.

South Korea confirmed a total of 571 cases of the novel coronavirus on Friday, according to the South Korean Centers for Disease Control and Prevention.

That brings the national total to 2,337 cases -- the largest outbreak outside of mainland China.

The number of cases reported on Friday is 67 higher than Thursday, when 505 cases were confirmed.

The latest figures include one more military personnel, bringing the total number of confirmed cases in the South Korean military to 26.

No new deaths were reported on Friday, so the national death toll remains at 13.

Among the 571 new cases, 447 are from Daegu, where the outbreak has been concentrated. Many of the cases are linked to a religious group in the city.

The number of confirmed coronavirus patients has spiked in South Korea, while the outbreak appears to be stabilizing in China outside the epicenter in Hubei province.

The Chinese government on Friday dismissed the online speculations.

“Airlines have cut flights since the outbreak began and that has led flights from South Korea to China to be full,” said Chinese Foreign Ministry spokesman Zhao Lijian at a regular news briefing. “But the overwhelming majority of passengers on these flights have been Chinese citizens based in South Korea.”

“We will strengthen information sharing and cooperation with South Korea, and provide assistance within our ability,” he added.

Outside of Asia, the number of cases of the virus has risen to over 650 in Italy, the worst outbreak in Europe.

Tens of thousands in a "red zone" in northern Italy have been put on effective lockdown, as officials race to stop it spreading throughout the country.

Meanwhile, Belarus and Lithuania have reported their first cases of the virus, as France reported two new infections, bringing its total to 40.

"I don't think right now there is any reason to close the border, especially because the two areas are very well confined and we know exactly the two major outbreaks and all the people that we found all around Italy -- which are very few -- are coming from that area," Sileri said.

Warning against panic and paranoia: "I think paranoia and anxiousness and panic will run much much more than the virus and we had problem with this in the last few weeks," Sileri added. "This is the first epidemic event in era of social media, and this doesn't help, absolutely doesn't help."

Italy outbreak spreading: There is evidence that the Italian outbreak has already spread beyond its borders, with Spain, Germany, Denmark and the UK reporting cases among travelers who had been in Italy.

EU response: The need to respond to the health crisis is revealing -- and fueling -- longstanding rifts within the European Union.

A woman with "mild symptoms" has become the first confirmed coronavirus case in Lithuania, the country's Ministry of Health told CNN in a statement today.

She is currently in isolation in Republic Siauliai Hospital, which has the required infrastructure, the ministry said.

Three family members of the patient are being closely monitored in hospital and have not experienced symptoms so far.

Other people who have been in contact with the infected patient are being identified and their health is being examined, the ministry said. None of them have experienced symptoms.

“Despite the efforts made and the proactive preventive measures that we took among the first, we regret to declare that Lithuania did not avoid the coronavirus,” said Minister of Health Aurelijus Veryga.
“We were well aware that the threat existed, and we were actively getting ready for this scenario.”

Two new coronavirus cases have been confirmed in France, bringing the total number of identified cases in the country to 40.

The two infected people are relatives of a person who had previously tested positive. They had attended a party together, before that individual was aware that they had coronavirus, Daviet said.

The mayor added that it was "possible" that there were other cases in his municipality.