A Wuhan doctor, from the same department as whistleblower doctor Li Wenliang, died from coronavirus on Tuesday, according to Wuhan Central Hospital.

Mei Zhongming was the 57-year-old chief doctor and deputy director of the ophthalmology department at Wuhan Central Hospital, and was Dr. Li’s superior.

The hospital expressed “deep condolence” at the news of Dr. Mei’s death.

Li Wenliang was regarded as a hero in China for trying to raise awareness of the coronavirus outbreak before it was publicly acknowledged by the government.

Li was detained in December after he warned about a potential "SARS-like" virus spreading in Wuhan.

He died in early February from the coronavirus, sparking a wave of grief and anger across China.

Five people in the Czech Republic, all with connections to Italy, have tested positive for the novel coronavirus, the country's health minister said today.

According to Czech state broadcaster Radio Prague International, the first three patients are two Czech citizens who had been in northern Italy, and an American studying in Milan.

A young Ecuadorian woman who was travelling with the American student has now tested positive after being retested. The fifth patient is a woman from Usti nad Labem, northern Bohemia, who had returned from Italy on Friday.

According to Radio Prague International, the Czech government is now looking to ban flights from northern Italy, pending consultation with the European Commission.

The interior minister is pushing to declare a state of emergency. Italy is currently battling the largest coronavirus outbreak in Europe, with more than 2,000 people confirmed to be infected.

South Korean President Moon Jae-in declared war on the novel coronavirus during a Cabinet meeting today, his office said in a text to reporters.

“The crisis in Daegu and North Gyeongsang province reached its peak, and the whole country has entered a war against the infectious disease,” Moon said.

Moon has asked all government organizations to switch to a “24-hour emergency situation room system until (we) come out of the crisis situation.”

He added that “there is a need to further strengthen the emergency-response posture for quarantine and economy.”

South Korea has the largest number of coronavirus infections outside of mainland China. To date, there have been over 4,800 confirmed cases of the virus and 29 deaths in the country.

A US congressman has sent a letter of concern to the US Centers for Disease Control and Prevention after it stopped listing on its website the number of Americans tested for the coronavirus.

Since January, the CDC had been publishing a cumulative total of US novel coronavirus cases and the number of patients who have been tested in the United States.

The change on Monday was met with skepticism from Rep. Mark Pocan, a Wisconsin Democrat.

According to Pocan's letter, on Sunday the CDC's website listed how many cases were travel-rated, the number of person-to-person cases, the total number of people tested, and the number of coronavirus deaths.

But on Monday, the website no longer listed the number of people in the United States who had been tested.

“Americans are dying. We deserve to know how many Americans have perished from COVID-19 and we deserve to know how many people have been tested for it,” Pocan said in the letter.
“Knowing that CDC testing is keeping pace with the likely number of cases is imperative to maintaining public trust. With that in mind, when will you return to publicly reporting the total number of deaths and tested persons on your website?”

In an email early Tuesday morning, the CDC told CNN: “Now that states are testing and reporting their own results, CDC’s numbers may not represent all of the testing being done nationwide.”

The South Korean religious group at the center of the country's coronavirus outbreak has handed over a full list of 310,000 members to authorities for follow-up health checks.

The Central Disaster Relief Headquarters announced today that a list, comprising of 245,000 members and 65,000 trainees, had been forwarded to provincial governments, excluding minors and overseas members, vice health minister Kim Ganglip said during a news briefing.

Local authorities have surveyed 99% of the members over the phone, he said.

South Korean officials believe a large number of cases in the country attended a Shincheonji service or have been in contact with attendees.

The religious group says it is cooperating with local authorities, and has shut down all services and gatherings.

On Tuesday, the Korea Centers for Disease Control and Prevention (KCDC) reported that 2,300 members tested positive from the Daegu branch of the roughly 5,000 members who have been tested so far.

He added that about 9,000 members of the Daegu branch are currently under quarantine.

In total, more than 4,800 people in South Korea have tested positive for the virus, with the vast majority of cases in Daegu.

All foreigners and Chinese nationals who have been to "key countries or regions" within the past 14 days must be quarantined for two weeks, the Shanghai government said today in a statement posted online.

The statement on China's Twitter-like Weibo platform doesn't specify which countries this would apply to.

However, as the number of coronavirus cases outside China grows, it is likely to be applied to nations such as South Korea and Iran, which are currently battling epidemics of their own.

The city of Beijing announced a similar measure last week.

"The public's panic has not eased": The Chinese government is attempting to get its economy back up and running as quickly as possible, as fewer new infections are reported across the country, especially outside of the outbreak epicenter of Hubei province.

An editorial in state-run tabloid Global Times published Monday admitted that there was reticence to get to work in China due to concerns of new infection clusters.

"The public's panic has not eased, and there are large obstacles to the resumption of work," the editorial said.

"Many local officials dare not embrace the complete resumption of production and work, as if there is a new disease cluster, they would be blamed and have to take responsibility for it."

There are now 73 countries and territories globally that have reported cases of the novel coronavirus, which has infected more than 90,000 people around the world.

And the spread of the virus doesn't appear to be slowing.

Since Monday alone, eight countries in Asia, the Middle East and Europe have reported their first cases of the virus.

The largest number of global infections are still in China, South Korea, Italy and Iran. Several countries have put in place travel restrictions in an attempt to stop the spread of the disease, which has killed at least 3,100 people globally.

The White House's capacity to control the coronavirus crisis, the credibility of its upbeat messaging and its efforts to build public trust are about to face a grave test as health officials report a spike in confirmed cases and new deaths on US soil.

Reassurances by President Donald Trump and his top aides that Americans should remain calm went only so far on a day when the number of American fatalities jumped to six, the total of cases topped 100 and experts warned that the true scale of infections was likely far higher than the spotty medical testing carried out so far shows.

The days ahead will show whether the Trump administration's repeated shading of the truth will hamper its ability to unite the nation during an emergency.

A White House often enveloped by chaos -- which has stigmatized expertise and prioritized loyalty among top officials -- will be called upon to unleash the power of a coordinated and unified federal government.

So far, and into Monday, Trump's team has portrayed the novel coronavirus as a limited threat to most Americans.

It has done little to prepare the country for worst-case scenarios that may not come to pass but would require a steeling of collective national nerves and a willingness to comply with federal directives and to accept the President's leadership. 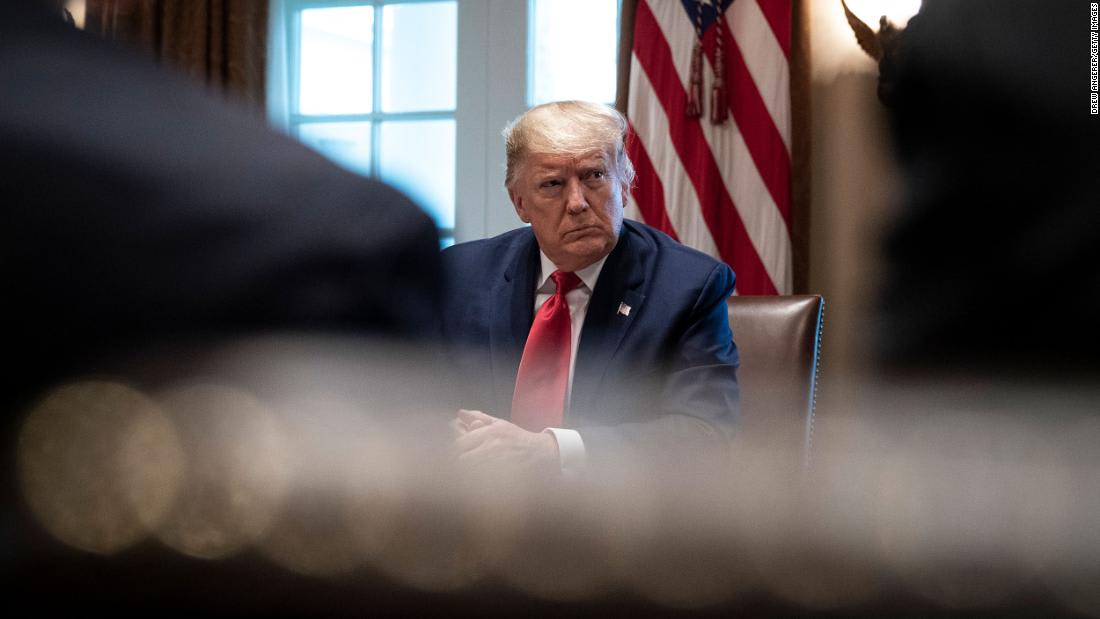