People arriving from multiple places in Asia, the Middle East and Europe will be forced to self-quarantine by Thai authorities, the country's Public Health Minister Anutin Charnvirakul said in a Facebook post Tuesday.

Anyone traveling from those places will have to self-quarantine for 14 days "with no exceptions," Charnvirakul added.

The measures imposed by the Thai government include isolating or quarantining those with temperature above 37.5 degrees Celsius (99.5 degrees Fahrenheit) or with suspicious coronavirus symptoms.

Travelers who have no fever and show no symptoms will still have to enter self-quarantine for 14 days. They will not be allowed to leave their premises unless special permits from Thai authorities are obtained.

The British government has said that "it is possible that up to one fifth of employees may be absent from work" during the peak of a coronavirus epidemic in the UK.

According to its coronavirus action plan, published Tuesday, "police would concentrate on responding to serious crimes and maintaining public order" in the case of a significant loss of officers and staff.

Other measures put in place in the event of the disease becoming "established in the UK," would be: "school closures, encouraging greater home working, (and) reducing the number of large scale gatherings."

The plan comes as the UK has seen a rise in cases, which has seen the government scale up testing measures in recent days.

As of Tuesday morning, there are 40 confirmed cases of the virus in the UK. According to the country's Department of Health, "a total of 13,525 people have been tested in the UK, of which 13,485 were confirmed negative and 40 positive."

Up to a million people could be tested for coronavirus by the end of week, the FDA said Monday, as cases across the US rose to more than 100 and health officials warned that the number will keep climbing.

Cases of the virus have now been reported in 12 states -- the majority of them in California and Washington state, where six people have died.

About a quarter of the current cases were likely transmitted through US communities, officials have said, meaning they were not travel-related.

"My concern is as the next week or two or three go by, we're going to see a lot more community-related cases," Dr. Anthony Fauci, the director of the National Institute of Allergy and Infectious Diseases, said in a news conference Monday. "That's of great concern."

The number of cases has been climbing as new guidelines from health officials gave more labs the go-ahead to conduct tests. Faulty kits from the Centers for Disease Control and Prevention initially led to delayed and inconclusive results.

Over the weekend, the US Food and Drug Administration further expanded who could test for the virus by allowing additional labs to develop their own tests for the virus. The move, FDA Commissioner Dr. Stephen Hahn said, would enable academic centers and private companies to develop and use tests.

He said up to a million tests will likely be conducted by the end of this week. 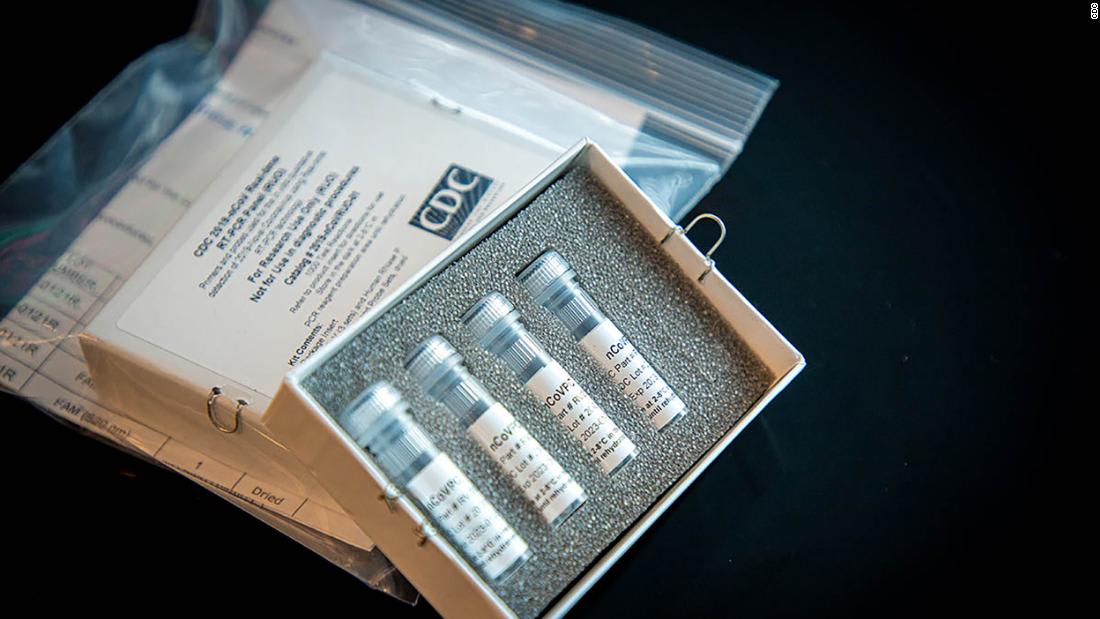 Up to 1 million people could be tested for coronavirus in the US by the end of the week, officials say

The Chinese Embassy in Iran is planning to evacuate Chinese citizens from the country as the coronavirus outbreak continues to grow, the state-run Global Times reported.

The first charter flight will arrive in Iran on Tuesday night, the outlet said. Chinese students stranded in the holy city of Qom, ground zero of Iran's outbreak, are among those who have registered for the evacuation flight.

Authorities in Tehran said at least 1,500 people have been infected in the country, killing 66, including a top government adviser.

Deputy Health Minister Viktor Lyashko said the infection was identified in the southwestern city of Chernivtsi. The patient had traveled with family members to Italy, which is experiencing a serious outbreak.

“We had four suspected cases and today one case got confirmed,” Lyashko said in a televised briefing.

Lyashko said the suspected cases had "few contacts" with other people but "local epidemiologists know about all of them and now they are now working through them."

Ukraine is the 74th country or territory to report a case of the virus outside mainland China, where the outbreak began.

Indian Prime Minister Narendra Modi took to Twitter today in an attempt to allay fears over the spread of coronavirus.

"There is no need to panic. We need to work together, take small yet important measures to ensure self-protection," Modi wrote.

Modi added that he has reviewed preparedness efforts on the coronavirus and that different ministries and states are working together, including screening people arriving in India to providing prompt medical attention.

India, which has reported six infections, has suspended issuing visas to citizens of several of the countries hardest-hit by the coronavirus.

According to a news release from the Indian government, all regular visas issued on or before March 3 and granted to nationals of Italy, Iran, South Korea and Japan who have not yet entered the country have been suspended with immediate effect.

An earlier suspension of visas for Chinese citizens remains in force.

The statement says those requiring essential travel to India may seek fresh visas from the nearest Indian embassy or consulate.

India has also asked its citizens not to travel to China, Iran, South Korea and Italy, and advised against any non-essential travel to other coronavirus-affected countries.

Italian infected: The news of visa suspensions comes after a 69-year-old Italian man in Jaipur was confirmed to be infected with the coronavirus -- India's sixth confirmed case. Authorities are trying to track down 18 other Italian citizens who were traveling with the man.

Myanmar's armed forces has announced it will postpone its annual military parade in order to try and prevent the spread of the novel coronavirus.

In a statement released today, the Tatmadaw True News Information Team said that despite there being no confirmed novel coronavirus cases in the Myanmar, the "public has been notified to avoid public places as much as possible."

The statement cited "more and more cases" found in South Korea, Italy and Iran saying "Myanmar might face similar circumstances at any time and place."

The Armed Forces Day Parade was originally scheduled for March 27, and would have marked the event's 75th anniversary.

The novel coronavirus is continuing to spread rapidly around the world, with more than 90,000 global cases and over 3,100 deaths.

More than 70 countries and territories now have confirmed cases of the virus.

What you need to know:

South Korea's "war" on the coronavirus: Nearly 1,000 new cases announced today pushed the East Asian country's total past 5,100, including 29 deaths -- the biggest outbreak outside mainland China. The majority of infections are in the southern city of Daegu.

In a cabinet meeting today, South Korea's President Moon Jae-in said that the whole of South Korea "has entered a war against the infectious disease."

Global spread widens: New cases were reported today in countries as far apart as India and Ecuador, and Australia and the UK. Meanwhile, Latvia, Tunisia, Jordan, Saudi Arabia, Portugal and Senegal were among countries to report their first confirmed cases of the coronavirus since Monday.

WHO on alert: The director general of the World Health Organization has warned that the virus has brought the world into "unchartered territory." "We have never before seen a respiratory pathogen that is capable of community transmission, but which can also be contained with the right measures," Tedros Adhanom Ghebreyesus tweeted.

Iran receives medical supplies: The World Health Organization has sent aid to Iran, which is currently working to contain a quickly spreading coronavirus epidemic. At least 1,500 people have been infected in the country, killing 66, including a top government adviser.

Australia stimulus plan: Australian Prime Minister Scott Morrison said his government will announce a stimulus package, amid a financial slowdown in China and the global spread of the coronavirus. There are now 35 cases of the virus in Australia.