Australia only has 42 confirmed coronavirus cases -- but that hasn't stopped shoppers frantically buying up supplies.

Shelves have been left empty at supermarkets and pharmacies across Australia, as worried consumers stock up on toilet paper, pasta, rice and face masks.

At a Coles supermarket at Greenslopes Mall in Brisbane, a staff member said Wednesday that a new delivery of toilet rolls was snapped up before workers could even take them off the pallet. Workers were handing packs of rolls straight to customers, said the worker, who did not want to be named as he isn't authorized to speak to media.

CNN did not see any shoppers panic buying, although some could be heard muttering "it's insane" and "it's ridiculous" as they realized some shelves were empty.

When CNN visited the store, there were no toilet rolls, very little dried pasta and rice, and stocks of paper towels and tissues were also running low.

How companies are responding:

On Wednesday, Woolworths -- one of Australia's biggest supermarket chains -- announced it would impose a limit of four packs of toilet paper per customer.

Kleenex urged customers not to panic, as the country wouldn't be running out of toilet paper any time soon.

Australia has confirmed two additional cases of coronavirus, bringing the country's total to 42, according to health authorities in Queensland and South Australia.

Queensland reported one case involving a 26-year-old man who recently returned from Iran, according to a statement posted by the state government Wednesday. He is currently in a stable condition.

As both the coronavirus and panic related to it continue to spread around the world, so too are bogus claims, conspiracy theories and misinformation about the disease.

There's so much inaccurate information floating around out there that the World Health Organization is calling it an "infodemic."

So let's unpack some myths.

Reality: Scientists in both China and the West have widely dismissed these theories, though that hasn't stopped them from spreading. Experts are still trying to figure out the exact source of the virus, but research indicates that it likely originated in bats and was transmitted to an intermediate host before jumping to people -- just like its cousin that caused the 2003 SARS epidemic.

Myth 2: Home remedies can cure or prevent the virus

Reality: There's currently no cure for the novel coronavirus. And while research is underway, it could be more than a year before a vaccine becomes available.

The best way to protect yourself right now is to do what you would every cold and flu season. Stay at least three feet away from anyone who may be infected. Wash your hands often with soap and water for at least 20 seconds. Cover your mouth and nose when you cough or sneeze with your elbow or a tissue that you throw away immediately after. And disinfect the objects and surfaces you touch. If you have symptoms that feel worse than a common cold, seek treatment early.

Myth 3: You need to wear a mask

Reality: People who are well do not need to wear face masks, according to the United States Centers for Disease Control and Prevention. Face masks should instead be worn by those who have the new coronavirus and are showing symptoms, in order to protect others from being infected. 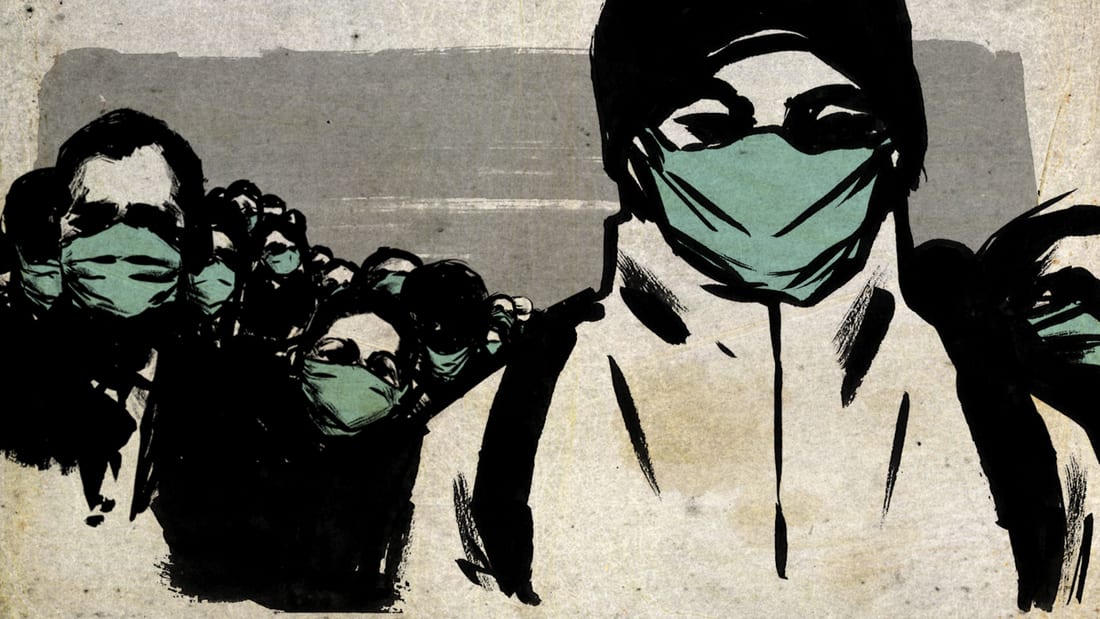 A nationwide team of 300,000 health workers and specialists have been activated in Iran to stop the spread of coronavirus, the health ministry announced on Tuesday.

Over the past week, Iran's coronavirus cases have increased dramatically. There are now more than 2,300 cases of the virus and 77 deaths officially recorded in the Middle Eastern nation, making it one of the worst affected countries in the world.

According to a report Tuesday by semi-official Fars News, 435 patients have recovered after testing positive for the coronavirus.

"Due to recent concerns over the nationwide spread of the coronavirus and to fully concentrate efforts on dealing with the outbreak, the president decided not to go ahead with these plans," the statement read.

The leaders of the three countries Moon planned to visit have acknowledged the decision, according to Kang. President Moon plans to hold talks with these leaders over the phone and discuss bilateral issues as well as international cooperation on the coronavirus.

During a meeting Tuesday with cabinet members, Moon said that the crisis in Daegu and North Gyeongsang province had reached its peak.

"The whole country has entered a war against the infectious disease," he said.

South Korea has reported 5,328 infections and 32 deaths from the coronavirus -- around 90% from Daegu and surrounding North Gyeongsang province.

Two patients in California who were recently diagnosed with coronavirus are in a critical condition, according to authorities.

One is a resident of Contra Costa County who has underlying health conditions and is under medical isolation in hospital, the county’s health officials said.

Authorities are investigating how the patient caught the disease. As the patient had no known travel history to infected areas or known contact with any confirmed cases, health officials believe this to be a “community transmission” case.

The other patient -- who has a presumptive positive result -- is an older person in Placer County who was likely exposed during international travel on a Princess cruise ship that departed from San Francisco to Mexico. This cruise has been associated with another confirmed case in Sonoma County.

The patient is “critically ill” and in isolation at a local hospital, according to a news release from Placer County. Close contacts of this patient are being quarantined and monitored.

Placer County has also declared a local health emergency and proclaimed a local emergency to make sure public health professionals have all the resources they need to keep the community safe.

California cases: In total, there are now 27 coronavirus cases in California and no deaths. The figures include presumptive positive cases that tested positive in a public health lab and are pending confirmation from the US Centers for Disease Control, and confirmed cases that have received positive results from the CDC.

Japan Airlines and All Nippon Airways have announced they will reduce the number of domestic flights in Japan, as the country records a growing number of novel coronavirus cases.

In a statement Wednesday, Japan Airlines said it was cutting the frequency of some flights due to a decrease in travel demand.

The flights affected were scheduled between March 6-12, and include routes across Japan, including flights to and from Tokyo, Sapporo, and Osaka.

Both airlines said passengers on the affected flights can change to alternative flights or request a full refund.

More than 990 people have been infected with coronavirus in Japan, and 12 people have died. The majority of cases are linked to the Diamond Princess cruise ship.

As the Trump administration struggles to clear up confusion and mixed signals over testing amid concerns that tests were not being made available soon enough, Vice President Mike Pence said Tuesday evening said that "any American can be tested."

What Pence said: Pence said in an off-camera briefing at the White House that there was new guidance from the US Centers for Disease Control (CDC) that any American could be tested -- "no restrictions, subject to doctors' orders."

Pence said the new guidance will make clear "that any clinician or health authority can administer the test."

CNN has reached out to the CDC for comment on whether the agency's online guidance will be updated to reflect the vice president's remarks.

What happened before the announcement: The announcement follows numerous complaints of citizens asking to be tested and turned away due to the strict CDC testing criteria.

It also follows a number of government missteps that have left Americans scared and confused about how to protect themselves during the viral outbreak.

US testing capabilities: On Monday, the Trump administration suggested that the US would be able to test close to 1 million people for coronavirus by the end of the week.

During a Senate hearing Tuesday, FDA Commissioner Stephen Hahn was greeted by skeptical lawmakers and pushed to explain how he thinks the United States could do a million tests when, to date, it has only been able to perform about 3,600.

"I want to distinguish between the ability to get the test kits out to the laboratories with the ability of the labs to actually do the tests," Hahn told lawmakers, offering no clarity on how many tests could actually be run by the end of the week. 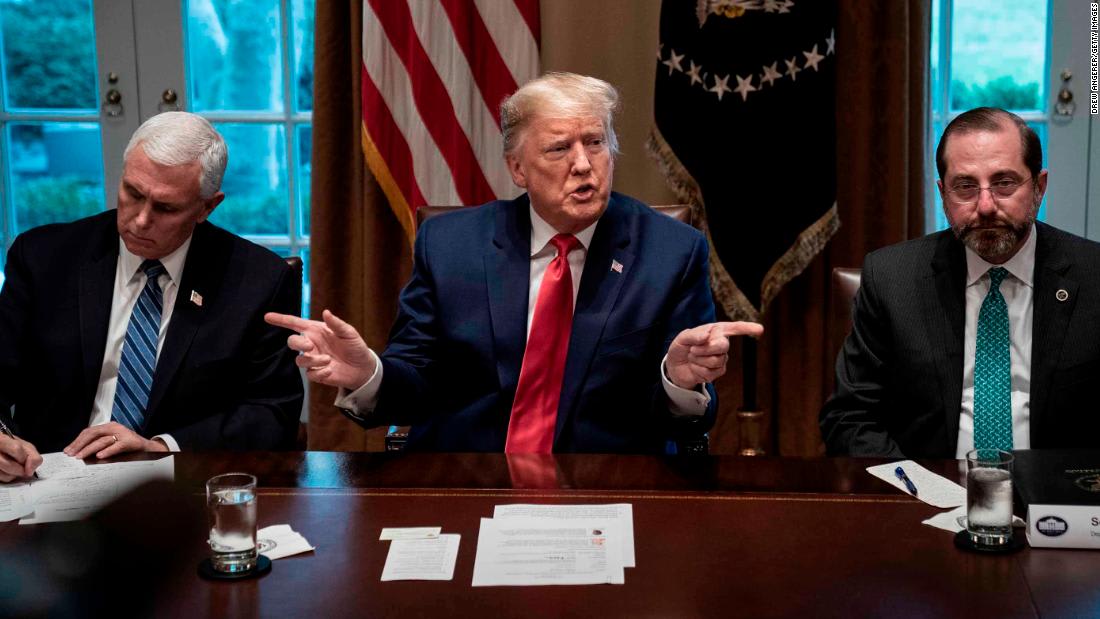 Pence: 'Any American can be tested' for coronavirus

Vietnamese budget carrier Vietjet Air has suspended all flights between Vietnam and South Korea due to the coronavirus outbreak.

In a statement Tuesday, Vietjet said that it has been coordinating closely with authorities to control the disease and ensure the highest safety of passengers and crew in accordance with World Health Organization recommendations.

The flight suspension between South Korea and Vietnam began on Tuesday, according to the statement.

Last week, Vietnam stopped issuing visas to South Korean nationals in order to try and curb the spread of the virus.