The Czech government has banned the sale of FFP3 medical face masks to anyone but healthcare and social care facilities, public health bodies, emergency rescue services and other state administration bodies.

The government said the FFP3 type of masks is most effective.

The move is an attempt by the government to stop people from panic-buying the protective gear and leaving medical professionals at risk.

“Providing medical assistance and ensuring the functioning of the healthcare system is an absolute priority …. we must be able to provide our citizens with medical assistance and treat the infected. If health workers become infected, the health system will fail and we will not be able to stop the disease and protect our citizens. That is why we have to provide a sufficient number of respirators for medical professionals and then, of course, for the Integrated Rescue System, ” the country’s Health Minister Adam Vojtěch said in a statement.

Five people have tested positive for the novel coronavirus in the Czech Republic.

One school in Prague, the country’s capital, has been shut over a suspected coronavirus case. A number of public events have been cancelled, and the government announced the Biathlon World Cup, scheduled for this week, will take place without spectators.

Do you have a question about coronavirus?

Ask it here — we'll be answering some of your questions through out the day.

Israel's Ministry of Health has asked thousands of people who attended a soccer match in Tel Aviv to self-quarantine as it confirmed 15 cases of coronavirus in the country.

In a statement released this morning, the Ministry of Health said a young man who tested positive for coronavirus entered Bloomfield stadium through Gate 8 on Monday to watch a match between Hapoel Tel Aviv and Maccabi Tel Aviv.

Anyone who entered the ground through the same gate has been instructed to self-quarantine for two weeks. Israeli TV reports put the number affected at more than 5,000.

The young man worked a toy store in Or Yehuda, a town in central Israel and a girl who visited the store has also tested positive for coronavirus, the Ministry said.

Russian President Vladimir Putin said that fake stories about coronavirus in Russia are being planted from abroad and there is nothing “critical” happening in the country.

“Regarding these provocations, the FSB (Federal Security Service) reports that most of these planted news come from abroad and this unfortunately always follows us around,” Putin said during a meeting with the government.

“Thank God, there is nothing critical happening here but people must be informed of the real situation so I ask that this process is properly organized," he added.

During the session, deputy prime minister Tatyana Golikova said that social media reports claiming the Russian government was covering up the real number of coronavirus cases in the country were not true.

In late February, an explosive claim by the US State Department that thousands of Russian-linked accounts on Facebook and Twitter were spreading disinformation about the virus made the headlines.

Social media companies, however, said they had not seen supporting evidence. Russia's Foreign Ministry has denied the allegations of being behind the alleged coronavirus disinformation campaign. 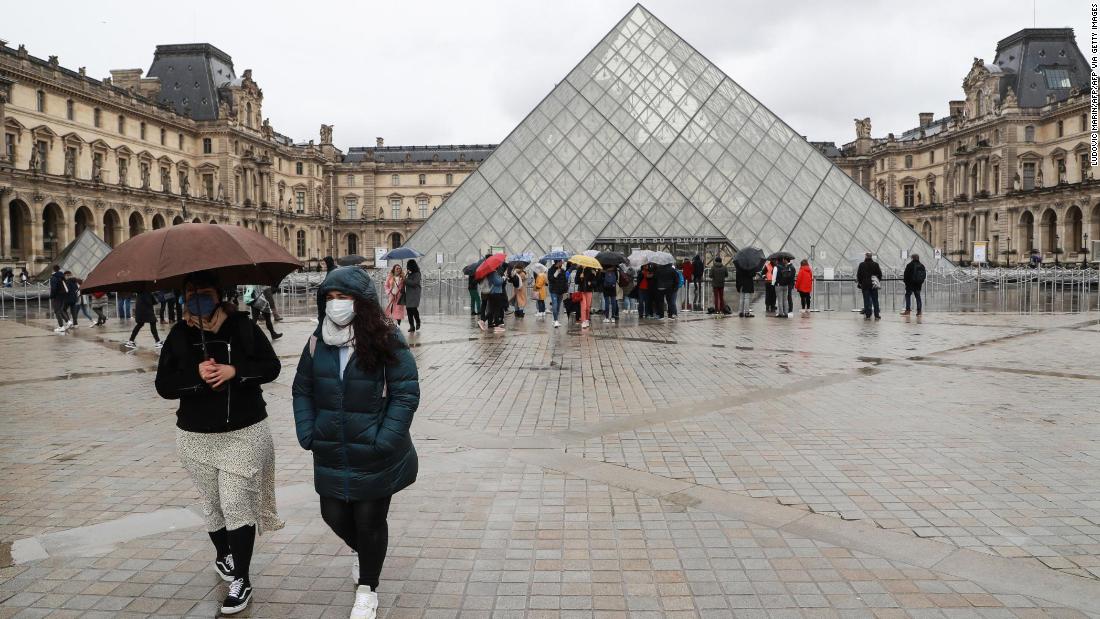 Paris’ famed Louvre Museum has re-opened today after a coronavirus outbreak in France caused it to close on Sunday.

In a statement on Facebook, the world’s largest art museum said its doors are open.

There is no current threshold that could derail the Tokyo 2020 Olympic Games, organizing committee CEO Toshiro Muto told CNN's Blake Essig at a news conference on Wednesday evening.

When asked if there was there had been discussion with the IOC (International Olympic Committee) about a tipping point that could lead to the cancelation or postponement of this summer's Games, Muto said: “No not at all, we are planning to have the Games as planned. We are doing our utmost to make it happen.”

Tokyo Olympic organizing committee chairman Yoshio Mori acknowledged public opinion surrounding the coronavirus, saying that it is important to listen and take that into account in what he called a “constantly changing situation.”

Responding to Japan’s Olympic Minister’s Tuesday statement outlining the potential for postponement of the Games, Mori responded: “I don’t know, I’m not a god.”

Japan’s minister for the Tokyo Olympic and Paralympic Games, Seiko Hashimoto, had said that the Tokyo Games “could be postponed until later this year.”

At the news conference on Wednesday, the organizing committee also assured that it will take all necessary steps to prevent the spread of the coronavirus among runners, spectators and staff as the Tokyo 2020 Olympic Relay begins on March 20.

The group said they would make decisions based on the status of infection in the prefectures where each leg is being run.

The transit operator said on Thursday that passengers were encouraged to make an appointment to enter two commuter-heavy stations during morning rush hours.

Using one of five authorized apps, passengers will be able to make an appointment for a spot to enter one of the two stations the next day.

They will receive a QR code on their smartphones if they complete the process successfully. The code is valid for half an hour around the time chosen by the passengers.

The aim is to reduce crowding in stations and on trains during the outbreak, as well as waiting time outside stations, according to the subway operator.

Beijing Subway is the busiest in China with a daily ridership of over 10 million.

Hasbro, the maker of several "Star Wars" Baby Yoda toys set to hit stores later this year, confirmed last week that its supply chain is being disrupted by the coronavirus outbreak.

Coronavirus disruptions have not hurt production of Baby Yoda toys yet, according to industry expert Jim Silver, CEO of Toys, Tots, Pets & More, a toy industry review website. Silver said he spoke with sources inside the Chinese factories that Hasbro works with.

But Silver said the situation could soon change for the worse -- and not just for Baby Yoda.

"If things aren't normal by the time June and July roll around, there will be shortages on a litany of toys," Silver told CNN Business.

Baby Yoda, officially known as "The Child," became an internet sensation in November following its surprise debut at the end of episode one of the Disney+ series "The Mandalorian."

The British Foreign Office (FCO) is “urgently” calling for information from Iran on reports that coronavirus is spreading in a Tehran jail where dual British-Iranian nationals are imprisoned.

In a statement it called on the Iranian government to “immediately allow health professionals into Evin prison to assess the situation of British-Iranian dual nationals there.”

Iran is officially reporting 92 deaths from coronavirus and 2,922 confirmed cases.

Kianush Jahanpoor, public relations manager of the health ministry, announced the updated figures on state TV on Wednesday, saying there were 586 new cases and 253 of them were in Tehran.