McDonalds will suspend operations in five cities in China, according to a statement posted on its website Friday.

Outlets in Wuhan, Ezhou, Huanggang, Qianjing and Xiantao -- all in Hubei province -- will be shut starting Friday.

No date has been set to reopen.

It is all but certain that there will be a confirmed case of the Wuhan coronavirus in the UK, a health expert told CNN.

Mark Woolhouse, a professor of infectious disease at the University of Edinburgh, warned that previous experience shows that airport screening will not stop the spread of a virus.

“Sooner or later we’ll get a case in the UK,” said Woolhouse.

He would not comment on any current suspected cases. There have been no confirmed cases in the UK so far.

Woolhouse said that under World Health Organization (WHO) guidelines, anyone who experiences flu-like symptoms and has been to Wuhan, or has even been in contact with someone who has been there, is being tested.

As that is a “very broad category,” he said he’s not surprised at the number of potential cases being tested in the UK.

He cautioned about airport screenings, saying that research on previous outbreaks, such as SARS and swine flu, showed that this was not a very effective tool.

“That doesn’t mean we shouldn’t be doing it, but we absolutely can’t rely on it,” he said.

So far, he said that the Wuhan coronavirus fatality rate appears to be “considerably lower” than for SARS. (Yesterday the World Health Organization estimated it to be 4%.)

The virus does appear to be spreading more quickly than SARS, Woolhouse said, which had fewer than 10,000 cases worldwide after several months.

Famous Beijing landmarks, including a section of the Great Wall of China, will close to tourists from Saturday for an undetermined amount of time, according to local officials.

The Juyonggang Great Wall Scenic Area -- the part of the wall closest to China's capital -- as well as the Ming Tombs and Yinshan Pagoda Forest will be shut from tomorrow.

The Bird's Nest stadium, a venue for the 2008 Olympic Games, was closed on Friday, according to Reuters.

These measures are part of efforts to control the outbreak -- which has also seen authorities impose indefinite travel restrictions on tens of millions of people across ten cities in China.

There are now three confirmed cases of the virus in Singapore, according to its Ministry of Health (MOH).

The second confirmed patient, who has been placed in an isolation ward, is a 53-year-old female Chinese national from Wuhan who arrived in Singapore with her family on January 21, the ministry wrote in a statement.

The ministry added that out of 44 suspected cases in Singapore, 13 have tested negative, three tested positive. The results of 28 cases are pending, it wrote.

It's the most celebratory time of the year in China -- but in many cities, festivities have been called off.

Saturday marks the first day of the Lunar New Year, also known in China as Spring Festival. It's a time when families gather, often traveling huge distances to go home.

Revelers gorge on banquets, give each other packets of money known as "hong bao" wear the lucky color red, and set off firecrackers to scare off the legendary half-dragon, half-lion monster "Nian" who comes out of hiding during Lunar New Year.

But this year, the festive season has become a season of fear.

Ten cities in Hubei have been placed under emergency travel restrictions to control the spread of the coronavirus, including the provincial capital Wuhan, where the new pathogen was first detected.

Wuhan is under effective lockdown, with all public transport in and out of the city closed.

Other cities across Hubei are under less severe travel restrictions, but the number of cities affected is growing. They include Ezhou, Huanggang, Chibi, Xiantao, Zhijiang, Qianjiang, Huangshi, Xianning and Yichang.

Restrictions include shutting down railway stations, bus stations, intercity transport links, or preventing private vehicles from driving on certain roads. Authorities in each of the cities have not yet announced when these restrictions will be lifted. 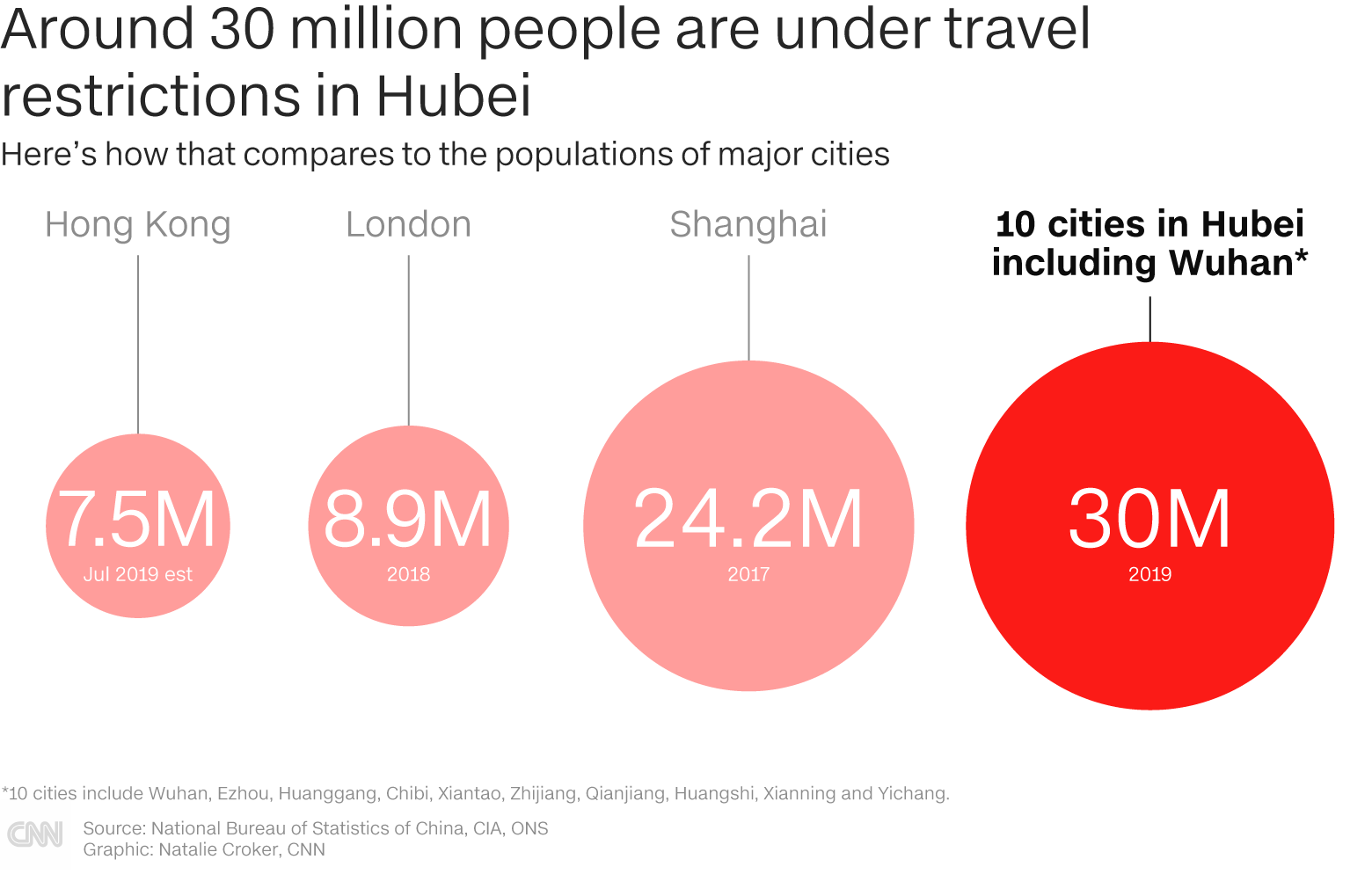 A new hospital dedicated to the Wuhan coronavirus outbreak is being built on the outskirts of the Hubei capital. The hospital is due to be completed and in use by February 3, and as photos published by state media show, dozens of diggers and other construction vehicles have been put into service getting the site ready.

Authorities in China have imposed indefinite travel restrictions on tens of millions of people across ten cities in an unprecedented effort to contain the spread of a deadly new coronavirus, as hospitals at the epicenter of the outbreak struggle to handle a surge in new patients.

The virus, which was first discovered in the city of Wuhan in December, has spread to every province in China, except the remote autonomous regions of Qinghai, Inner Mongolia and Tibet, with the number of infections rising to 846 worldwide.

As of Friday, the virus had claimed the lives of at least 26 people in mainland China, including a 36-year-old man not listed as having any pre-existing conditions.

Wuhan, the largest and most populous city in central China, remains under lockdown for a second day, while public transport has been suspended in six neighboring cities.

Posts on social media show an atmosphere of fear and anxiety among inside Wuhan, amid rising uncertainty over the ability of authorities to handle the potential epidemic.

A national research team of 14 experts has been set up to help prevent and control the latest novel coronavirus outbreak in China, the Ministry of Science and Technology announced Friday, according to state news agency Xinhua.

The anti-virus research team is a part of the ministry's emergency sci-tech project, which was jointly launched with the National Health Commission and other departments at a recent meeting.
The project will offer sci-tech support on 10 research aspects, including virus tracking, virus transmission, detection methods, genome evolution and vaccine development.

Respiratory scientist Zhong Nanshan has been appointed to head the team. Zhong is regarded as one of the heroes in China's fight against SARS in 2003 and has already taken a leading role in tackling the Wuhan virus.

His intervention earlier this month helped raise the alarm after the potential danger of the virus was initially downplayed by Wuhan officials.