Four people in Scotland are being tested for suspected Wuhan coronavirus after traveling from the Chinese city where the outbreak began, said Jurgen Haas, head of infection medicine at the University of Edinburgh, according to Britain's PA Media news agency.

Haas told PA: “We have currently three cases [of] suspected Wuhan coronavirus in Edinburgh and as far as I understand one case in Glasgow.”

The US National Institutes of Health (NIH) is working with two pharmaceutical companies to develop a vaccine for the Wuhan coronavirus, according to a Thursday announcement at the Davos World Economic Forum in Switzerland.

Dr. Richard Hatchett, CEO of the Coalition for Epidemic Preparedness Innovations, announced the coalition between NIH, pharmaceutical companies Moderna and Inovio, and the University of Queensland in Brisbane, Australia.

Dr. Anthony Fauci, director of the National Institute of Allergy and Infectious Diseases, told CNN that human trials could begin in a few months.

In a press release, Hatchett said that, given the “rapid global spread” of the Wuhan virus, “the world needs to act quickly and in unity to tackle this disease.”

Charles Li, CEO of the Hong Kong Stock Exchange, has said he hopes the world will react better to the coronavirus than it did to the SARS outbreak.

“We’ve been here in 2003 with SARS and everything else, hopefully this time, not only we have learned, but hopefully we’ll do better," said Li in an interview with CNN’s Julia Chatterley in Davos.

"This requires everyone to pay attention," added Li, referencing governments, institutions, hospitals and the media.

Li also commented on the market tumble in Asia.

“Markets reacted very quickly, very naturally to something that is not known, something like this; how fast is going to go, how serious is going to be, how broadly affecting the population is going to be so while those questions are still lingering the market is going to pause,” he said.

Stocks in China had their worst day in more than eight months Thursday as the deadly virus spreads across the country.

China's Shanghai Composite closed down 2.75% Thursday afternoon, and Hong Kong's Hang Seng Index closed down 1.5%. The benchmark has lost about 4% so far this week.

Advisers to the US Centers for Disease Control and Prevention (CDC) told CNN they are concerned that Chinese health officials have still not released basic epidemiological data about the Wuhan coronavirus outbreak, making it more difficult to contain the outbreak.

Other unknowns include the amount of time from exposure to the virus to the onset of symptoms, or at what point after infection someone becomes contagious.

Dr. William Schaffner, a professor at Vanderbilt University Medical Center and longtime CDC adviser, said if this outbreak were in the US, these questions would likely be answered by now – and those answers would help disease detectives put a stop to the outbreak sooner.

Regional health authorities in China have confirmed 13 new cases of the Wuhan coronavirus, bringing the total number of cases in mainland China to 611, and 622 globally.

Seventeen people have died from the illness, all in China.

The self-governing island of Taiwan has reported a confirmed case of the coronavirus. There is also one confirmed case in Japan, one in South Korea, three in Thailand, two in Macao, one in Singapore, one in Saudi Arabia and one in US.

Scientists say the death rate of Wuhan coronavirus is not as high as the SARS virus -- which swept through Asia in 2003 -- but added that the number of people infected is climbing.

Here's how the two match up: 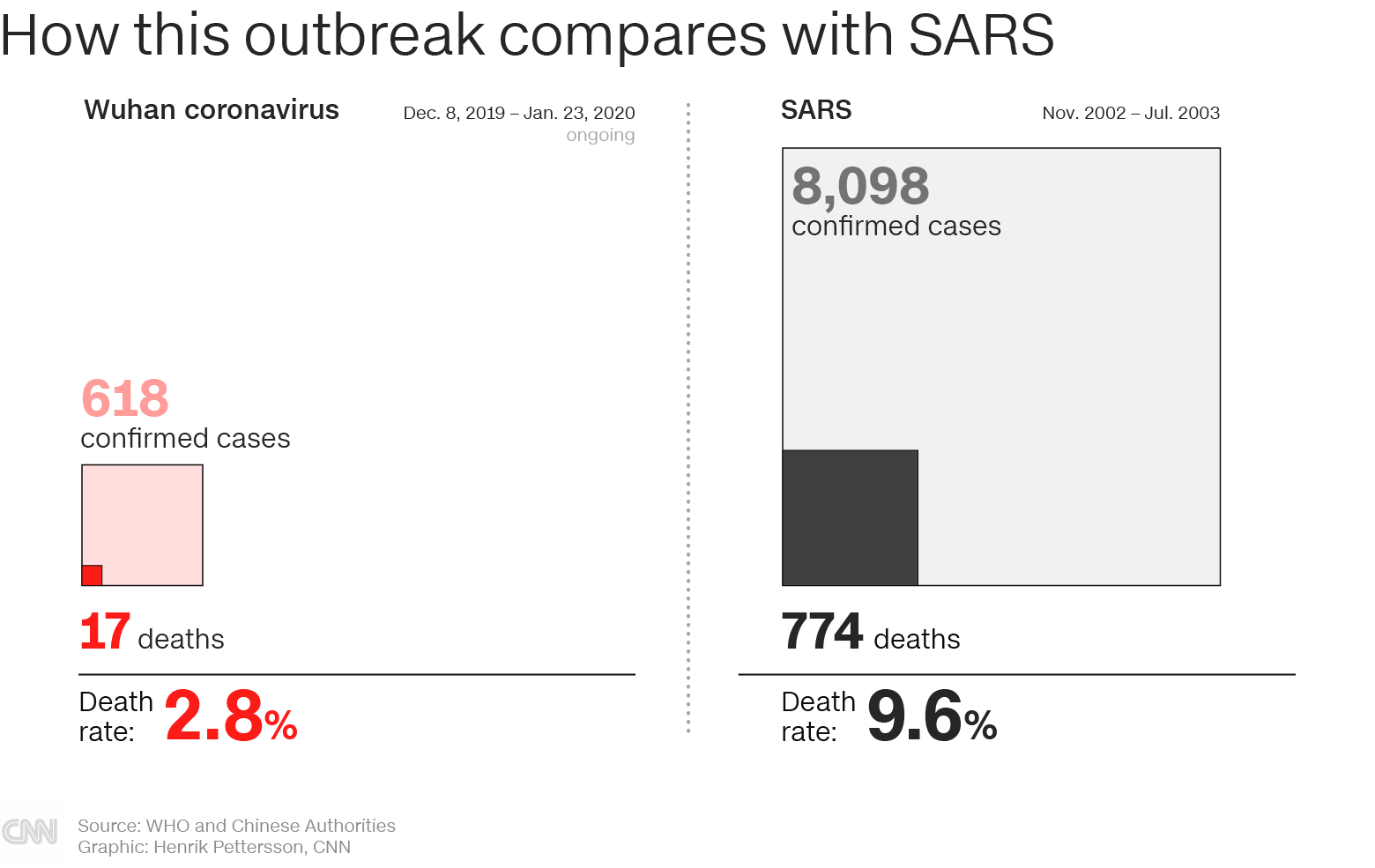 Doctors in Singapore have diagnosed a 66-year-old Chinese national with Wuhan coronavirus, according to a spokeswoman at the city’s Ministry of Health.

Officer Elfa Elyes said that the male patient arrived in Singapore from Wuhan on Monday January 20. The patient developed a fever and a cough on January 21, and was admitted into isolation the next day.

Singapore's Ministry of Health has also been investigating a second case whose preliminary test for the virus was positive. The patient is a 53-year-old female from Wuhan. The ministry is now awaiting further test results to formally confirm that she has the virus.

An Indian nurse in Saudi Arabia has been diagnosed with Wuhan coronavirus, according to India’s foreign office.

“About 100 Indian nurses mostly from Kerala working at Al-Hayat hospital have been tested and none except one nurse was found infected by Corona virus," tweeted Vellamvelly Muraleedharan, Indian Minister of State for External Affairs, on Thursday.

"Affected nurse is being treated at Aseer National Hospital and is recovering well,” he added.

Speaking in the House of Commons, Hancock said “the chief medical officer has revised the risk to the UK population from very low to low and has concluded that while there is an increased likelihood that cases may rise in this country, we are well prepared and well equipped to deal with them.”

There are currently no confirmed cases of the virus in the UK.

The health secretary did however say that this is a “rapidly developing situation” and he expected the number of cases and deaths to rise, but so far all fatalities have been in mainland China.