Donald Trump's decision to pull funding to the World Health Organization will weaken the global effort to fight the coronavirus pandemic and damage all of the world's countries, including the US itself, China has said.

Trump announced on Tuesday that he was halting funding to the WHO, pending a review into the agency. He had previously accused the organization of being too "China-centric."

"At present, the global pandemic situation is grim and is at a critical moment," China's Foreign Ministry Spokesperson Zhao Lijian told reporters on Wednesday, adding that Trump's move would "weaken WHO’s abilities and undermine global cooperation on combating the pandemic."

"It will affect all countries in the world, including the United States -- especially those with vulnerable abilities," he said. "We urge the US to fulfill its responsibilities and obligations, and support WHO to lead the international combat against the pandemic.”

Lijian also praised the WHO Director-General Tedros Adhanom Ghebreyesus's handling of the pandemic, and said the organization has "actively performed its responsibilities and played a central coordination role in promoting international anti-pandemic cooperation, which has been widely recognized and highly praised by the international community."

"Had the WHO done its job to get medical experts into China to objectively assess the situation on the ground and to call out China's lack of transparency, the outbreak could have been contained at its source with very little death," Trump said.

Russia reported 3,388 more cases of the novel coronavirus on Wednesday, the country's biggest single-day increase yet, according to its coronavirus response headquarters.

Overall, Russia has 24,490 confirmed cases of the coronavirus.

The disease has now reached all of Russia’s regions except for Altai in West Siberia, one of the least populous in the country.

The majority of cases — 14,776 — are in Moscow. The city’s health department said in a statement Tuesday that it expects to see a shortage of hospital beds in two to three weeks, and is working to prepare 24 more medical facilities to care for an influx of coronavirus patients.

US President Donald Trump stunned world leaders and health experts on Tuesday when he announced he was halting funding to the World Health Organization, in the middle of the global coronavirus pandemic.

He first threatened to do so last week, accusing the WHO of mismanaging the spread of the novel coronavirus, and of not acting quickly enough to investigate the virus when it first emerged in China in December 2019.

Antonio Guterres, Secretary-General of the United Nations, which is the WHO's parent organization, described the pandemic as unprecedented in a statement on Tuesday, and acknowledged that there would be "lessons learned" for future outbreaks.

"Once we have finally turned the page on this epidemic, there must be a time to look back fully to understand how such a disease emerged and spread its devastation so quickly across the globe, and how all those involved reacted to the crisis," he said in the statement.

But what is the World Health Organization? What role has it played in the coronavirus pandemic and how vital is US funding to it?

CNN has answered all your questions here.

Frankfurt airport -- one of Europe's busiest terminals -- has seen a sharp decline in passenger and cargo traffic due to the coronavirus pandemic, according to its operator, Fraport.

In a statement published on Wednesday, Fraport said Frankfurt airport had served some 2.1 million passengers in March -- a decline of 62% compared to March 2019. From January through to March 2020 passenger travel fell by nearly 25%.

The travel restrictions and the slump in demand caused by the COVID 19 pandemic had a massive impact," Fraport said in the statement, adding that the negative trend on traffic had continued in the first weeks of April and over the Easter holidays.

Fraport added that ''a significant downward trend'' in traffic figures could also be felt ''at all international locations.''

Donald Trump was in his element.

Playing to a cheering crowd at a Detroit-area auto parts plant in January, the President railed against disgraceful Democrats, bad trade deals and the dishonest media as he touted his record of creating jobs "like you have never seen before."

The brewing coronavirus crisis merited only a brief mention at the end of his speech. He wanted to assure his audience that his administration had it "very well under control."

"We think it's going to have a very good ending," Trump said.

Since then, an employee at the plant tested positive for coronavirus. Afterward, the plant ceased production, leaving its hourly workforce to collect unemployment.

The company, Dana Inc., which has locations around the globe, has seen its stock price plummet by more than 40% amid fears of the virus' uncontrolled spread.

While government officials and public health experts have devoted years to efforts to enhance US preparedness for a pandemic, a key factor went overlooked: a President like Trump.

Here's the latest on the coronavirus pandemic.

This post was updated to reflect that voter turnout in South Korea is the highest for a National Assembly election since 1996.

German foreign minister Heiko Maas has tweeted an apparent denunciation of US President Donald Trump’s decision to suspend payments for the WHO.

Heiko Maas, linking to a German TV news report of Trump’s announcement, said in the tweet that there was "no use allocating blame" for the pandemic:

"The virus knows no borders. We have to cooperate tightly against #Covid 19. It is one of the best investments to strengthen the #UN, and the underfinanced #WHO, for example in the development and distribution of tests and vaccines."

The coronavirus pandemic is plunging the global economy into its deepest slump since the Great Depression of the 1930s and governments and health officials must work together to prevent an even worse outcome.

That's the stark warning from the International Monetary Fund, which said on Tuesday there was a risk of the recession extending into 2021 if policymakers fail to coordinate a global response to the virus.

In its latest outlook for the world economy, the IMF said it expects GDP will contract by 3% in 2020, a far worse recession than the one that followed the global financial crisis of 2008, and a 180-degree reversal of its previous forecast in January when it was expecting growth of 3.3% this year.

"The Great Lockdown, as one might call it, is projected to shrink global growth dramatically. A partial recovery is projected for 2021 ... but the level of GDP will remain below the pre-virus trend, with considerable uncertainty about the strength of the rebound," the IMF said. "Much worse growth outcomes are possible and maybe even likely," it added. 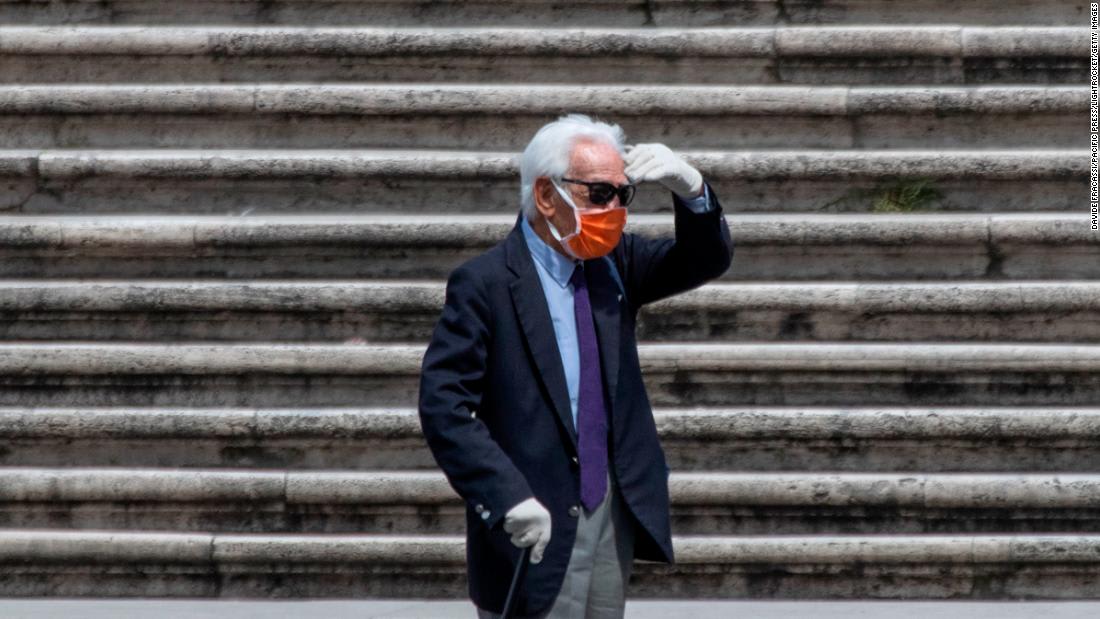 The world hasn't seen a recession this bad since the 1930s. The recovery is far from certain

A 35-year-old Australian man has become the first person to be jailed in the country for breaching self-quarantine requirements after he was caught on several occasions, according to a statement by the Magistrates Court of Western Australia.

Jonathan David was handed six-month and 14-day prison terms Wednesday on two counts of "failed to comply with a direction," and was ordered to serve one month of the sentences, while the rest would be suspended for one year.

According to a media release by the West Australian Police Force, the man was an interstate traveler from Victoria state who was required to self-quarantine for 14 days upon his arrival on March 28.

However, he was found to have wedged open a fire exit door at his hotel to leave and re-enter the property without being seen, and traveled on public transport to visit the metropolitan area of Perth.

David was subsequently arrested on April 5 and has been accused by police of "putting the community at risk," the notice said.