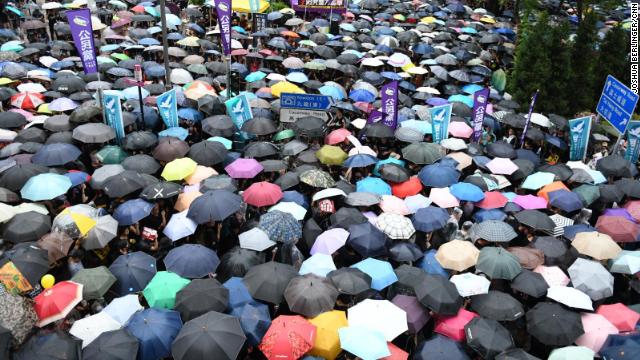 Our live coverage of Sunday's mass demonstrations in Hong Kong has wrapped up. You can read more here.

Here's a recap of what happened:

The protesters: Hundreds of thousands of people returned to the streets of Hong Kong in an attempt to restore peace after violent scenes at the city's airport earlier this week. It was the 11th consecutive week of protests. Organizers said 1.7 million participated in the demonstrations, while police put the number at 128,000 people.

Their demands: The protests started in June over a controversial extradition law, but have now expanded to call for Hong Kong's leader to step down, an inquiry into alleged police brutality, for those who have been arrested to be released and greater democratic freedoms.

The city's response: Police were noticeably absent from the protests. Hong Kong's government called for social order to be restored. And as unrest intensifies, Beijing has also been increasingly critical.

What's next: It's unclear what will happen next. The government said in a statement that it would begin "sincere dialogue" with protesters once everything calmed down.

A Hong Kong Police spokesperson told CNN that 128,000 people participated in the demonstrations at Victoria Park on Sunday.

The Hong Kong government has responded to the mass demonstration on Sunday, saying in a statement that the protests caused "much inconvenience to the community" and that it is "important to restore social order as soon as possible."

In response to the public meeting held in Victoria Park today (August 18), a Government spokesman said that though the public meeting was generally peaceful, the participants occupied a number of thoroughfares on Hong Kong Island, seriously affecting traffic and causing much inconvenience to the community. The Transport Department and the Police have actively co-ordinated with concerned parties to minimize the impact.
The spokesman reiterated that it was most important to restore social order as soon as possible. The Government will begin sincere dialogue with the public, mend social rifts and rebuild social harmony when everything has calmed down.

What's the atmosphere like right now? The mood is uncertain and increasingly tense on Harcourt Road, as a few thousand protesters continue to occupy the roads outside the government headquarters in Admiralty district. Police have been seen moving inside the government complex, to roars of disapproval and shouts from the crowd. The complex is heavily barricaded and protected by large water filled barriers.

What are people doing? Several protesters are wearing hard hats, goggles, gloves and other protection gear that has become a familiar sight in recent weeks. There’s a sense that a clearance could take place any time... or could be hours away if it comes at all.

What are the protesters saying? Speaking to CNN, one protester who only gave his first name as Peter said, “When there’s no police (at past events), people left at exactly 11:59 p.m.,” he said, referring to when police letters of no objection expire. The last MTR trains of the night also run around this time.

“Whenever there’s police it will be a mess and people will get hurt. I don’t think anyone wants anyone to get hurt tonight," Peter said.

Another protester named Steven said, “If police fire tear gas we will fight them."

Asked if it would be better if police stayed inside and let people disperse slowly but peacefully, he said “totally.”

If it's supposed to be a peaceful march, why are they still out? The unwillingness of the crowds outside government offices to leave shows that, while organizers Civil Human Rights Front can get hundreds of thousands of people out, it exercises little control over the small cohort of young frontline protesters.

They are determined to make a point tonight, either by holding the street until midnight or beyond, or by fighting back against police should a clearance come.

“We don’t want to have any problems tonight, no tear gas or anything,” one protester named Felix said. “This was supposed to be a peaceful protest. Those of us with gear will stay until the last but everyone else should go.”

He and his friends were shouting at the crowd saying “we’re waiting for you all to go home.”

Police have told CNN they do not yet have their own estimate for crowd size and CNN cannot independently confirm the organizers’ figures.

The number, if accurate, would represent a strong rebuke to those who claimed the movement had lost broad public support.

Speaking to the press in Victoria Park, the CHRF said they counted 1.7 million people in Causeway Bay and Tin Hau districts as well as Victoria Park.

The group said the number could be even higher as they believe more people were protesting who could not reach the areas listed above.

On June 9, days before the controversial extradition bill was due to have its second reading, organizers estimated the crowd size for that march to be more than 1 million, while police put the number at 240,000. At another march on June 16, organizers estimated that around 2 million had taken part, but police said 338,000 people had followed the original protest route.

There was a tense confrontation on Harcourt Road in Admiralty district when a man wearing a red T-shirt was blocked and briefly questioned by the crowd.

Men dressed in red had previously attacked protesters in North Point, in the east of the island, and protesters here accused the man of being in alliance with them. The mood became aggressive as it became clear the man was from mainland China. Protesters searched his phone but found nothing incriminating.

While tensions didn't reach the point of violence, it was a remainder of Tuesday's detention and assault of another mainland Chinese man in Hong Kong airport. That man was eventually evacuated by paramedics four hours after he was first detained and attacked, drifting in and out of consciousness during his ordeal.

The man stopped in Admiralty on Sunday told CNN he was from Shanghai and “wanted to go home.”

Photos of his detention were almost immediately shared on Chinese social media and by state media employees on Twitter, who accused Hong Kong protesters of acting like thugs.

If you're just joining us now, here's what you need to know about the protests happening today on Hong Kong Island:

The situation on Harcourt Road, outside government offices and the Legislative Council, is getting much closer to an occupation. Crowds here are mostly young and more are wearing masks, helmets and other riot gear.

There is still a constant stream of people heading westwards but it feels like more are staying to see what happens now the weather has improved somewhat. Police are still nowhere in sight.

Where are police? A handful of riot police have begun to gather along Des Voeux Road and Connaught Road, in the city's Sheung Wan district.

There are also tall water barricades outside the nearby Chinese government Liaison Office and some riot police are guarding the road leading to the building.

Are protesters there too? There are no signs of protesters here so far tonight -- though the Chinese Liaison office has been at the center of several violent clashes between protesters and riot police.

The Chinese Liaison Office is home to Beijing's top representative in the city -- and protests outside the building have been viewed as a direct challenge the Chinese Communist Party.

What about elsewhere? There are also large water filled barricades at the intersection of Tim Wa Avenue and Harcourt Road, outside the city government's main headquarters. This location was the site of clashes between protesters and police on June 12, when authorities moved to clear a similar (though much larger) occupation with tear gas and rubber bullets. Police are not currently in sight, though protesters say they have seen officers inside several police vans that are parked behind the barricades.