As protesters and police clash in Kowloon, business owners are taking a big hit.

A restaurant owner told CNN his establishment was empty -- on Saturday night, which should be the busiest time of the week. He doesn't support the protesters, but his relatives do -- exemplifying the deep social divide that has torn apart some Hong Kong families in the past two months.

Business leaders in the are city complaining of an economic toll due to the near-continuous protests, citing a decrease in retail sales compared to this time a year ago.

As riot police fire tear gas at crowds of protesters, they're leaving gas canisters and casings strewn on the street along Nathan Road.

The protesters and police are back to a tense stand-off, after charging protesters were pushed back by the gas.

Protesters who tried to charge forward with plastic shields on Nathan Road were quickly and easily pushed back by riot police, who fired a dozen rounds of tear gas.

Protesters have retreated, but are still banging their shield and chanting.

A group of protesters has just charged forward towards police on Nathan Road, breaking a standoff that has lasted more than 40 minutes.

Other protesters who stayed back say they may head to the Hong Kong Polytechnic University, which is about 15 minutes from their current location.

At the university they have supplies, first aid, and places to rest.

There's a standoff between the police and protesters on Nathan Road, the main artery of Kowloon.

Police haven't moved for about 20 minutes, as they position vans behind their lines.

It's unclear what police are waiting for. Earlier tonight, they had mobilized quickly and efficiently, clearing protesters gathered at the Tsim Sha Tsui Police Station in a few minutes.

That's seen protester numbers dwindle from thousands to a few hundred core members, who have erected plastic barriers as shields.

Local media footage shows a trash can ablaze on Nathan Road, between the protesters and the police cordon.

Also on Nathan Road, protesters have laid cardboard boxes in a row across the road, and set them on fire -- creating a horizontal line of low flames.

These are the third and fourth fires that protesters have lit tonight -- earlier, they set a pile of cardboard ablaze in front of the Tsim Sha Tsui Police Station, and then lit a fire in a car parked inside the station.

Last weekend, protesters also set a cart piled with cardboard on fire, and pushed it at riot police in Sheung Wan.

Seven men, aged between 24 and 31, and one 28-year-old woman were detained in Sha Tin district.

Four of the men were discovered pushing a trolley in a parking lot, police said. They were stopped and searched by the police, who recovered two batons, communication tools and other items used in recent protests.

Police also found the keys to an apartment, where they found and arrested the other four people. They were allegedly in possession of two bows and six arrows as well as suspected bomb-making materials, according to the police.

A large amount of essential oils – for which a permit is necessary – were also discovered in the apartment.

Riot police on Austin Road have just raised a black flag -- warning they are about to fire tear gas. It's the third time they have raised the flag tonight.

They are pushing back thousands of protesters still in the area. 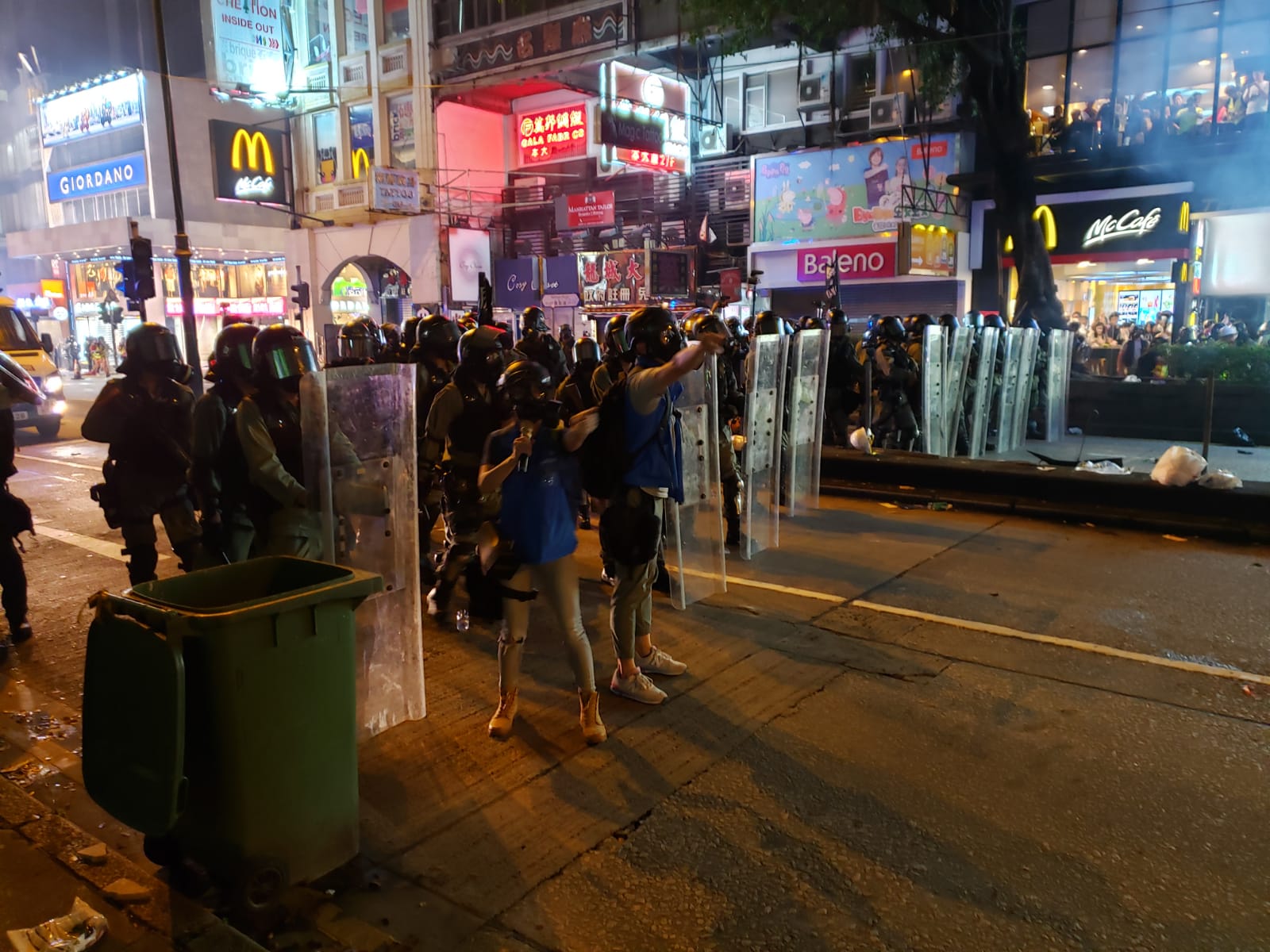 Riot police on Austin Road are moving hard and fast.Thousands of protesters have been pushed back, but they're throwing gas canisters back and shining lasers at the police.

Take a look at the scene in Kowloon: