Flights have now resumed and airlines are reaching out to confused, stranded passengers.

Cathay Pacific, Hong Kong's flagship carrier, said today that flights and check-in services are operating as usual, but "there is potential for further flight disruptions at short notice." The airline said all charges and fare differences will be waived for certain ticket changes, and passengers whose flights were canceled have been re-booked onto new flights. Those who booked directly with Cathay are allowed one free ticket change.

Many airlines haven't released updates since yesterday, when they announced flight cancellations -- but the airport's website shows that flights across various airlines are on schedule to depart today.

The airport told CNN that it had implemented a flight rescheduling system yesterday, but was unsure how long it will take to clear the backlog.

Check the list of departing and arriving flights here.

Hundreds of passengers had their flights postponed or canceled last night -- including British comedian Bill Bailey.

The actor -- famous for his roles in "Black Books" and "Never Mind the Buzzcocks" -- found himself caught up in the chaos, and went about documenting what he saw on Twitter.

Initially, he posted pictures of Hong Kong protest art that he saw at the airport.

About midnight, he tweeted that protesters were concerned for passengers' safety.

"They offered water and apologized for the inconvenience," he tweeted. "Police arrived try [sic] to enter Terminal 1 but were hugely outnumbered and retreated.

"Riot police turned up and it kicked off."

Many stranded travelers whose flights were canceled yesterday slept at the airport overnight, with families and children sleeping in and around the deserted check-in desks and luggage belts.

As the airport slowly returns to normal this morning, the departure board shows a handful of canceled flights -- but the majority seem to be going ahead and on schedule.

People are finally getting out.

Hundreds of travelers are in the departures hall, with more arriving and checking in as usual.

The airport has been cleaned up. Lennon walls -- spaces covered in colorful Post-it notes bearing protest messages -- have been taken down and the graffiti has been covered up.

Hong Kong International Airport, which has been occupied by thousands of protesters for two days in a row, released a statement this morning saying it has obtained an injunction to prevent more disruption today.

What this means: In theory, the injunction will allow the airport to "restrain persons from unlawfully and willfully obstructing" airport services -- but it's not immediately clear what effect this will have in practice. The airport had previously tried to implement security measures, such as only allowing passengers with boarding passes into the departures hall. But thousands of protesters quickly overwhelmed airport staff and entered the hall anyway.

The airport authority has said it will publish the injunction once it obtains the sealed copies, potentially clarifying what it will mean in practical terms. 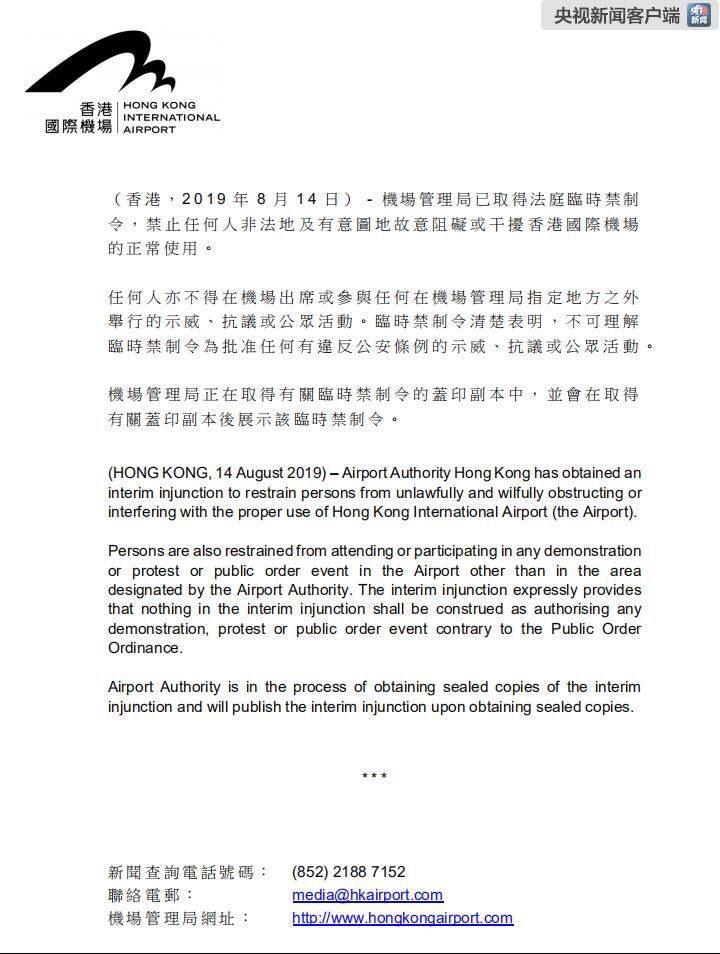 Airlines have canceled hundreds of flights out of Hong Kong this week because of the protests -- terrible news for companies operating in the financial hub.

Hong Kong airport is one of the busiest in the world. More than 74 million passengers traveled to and from the hub last year, and it serves about 200 destinations around the world. It also handles 1,100 passenger and cargo flights each day.

Experts worry that travelers will now avoid Hong Kong. "This is a disaster for Hong Kong that will cost tens of millions of dollars," said Geoffrey Thomas, editor in chief and managing director of AirlineRatings.com, a website that monitors airlines.

It's still too early to assess the economic impact of the shutdowns -- but fewer tourists could hit a range of businesses hard, from those in retail to restaurants and hotels.

At least 6 people were hospitalized after violent clashes at Hong Kong’s International Airport last night, according to the city’s Hospital Authority.

Three of those people have been discharged, while the others are in a stable condition.

Last night, two people were held by protesters and accused of being undercover police officers. One appeared to be unconscious and was eventually evacuated by paramedics. There were also scuffles later on, when police tried to leave after evacuating the man.

As the protests continue, countries and international groups are chiming in. Some have expressed support for the protesters, others have condemned the violence -- nearly all have called for calm.

Here's what the world is saying:

It's been a chaotic 48 hours in Hong Kong. Last night thousands of protesters showed up at the airport, grounding departing flights for the second consecutive evening and bringing chaos to the normally orderly hub.

It's now morning local time and life is slowly returning to normal -- but tensions are still running high and there's little indication whether tonight will descend into chaos again.

If you're just tuning in, here's what you need to know.

Here's the bigger picture: This is the 11th consecutive week of protests. They began as relatively peaceful marches in opposition to a now-shelved bill that would have allowed extradition to China.

But as recent protests have shown, it's not just about the bill anymore -- protester demands now include calls for greater democracy, the resignation of Hong Kong's leader, and an independent investigation into alleged police brutality.

Protesters are getting angrier and more volatile as fear and suspicion spread, and police ramp up arrests and crackdowns. Violence has been escalating for weeks -- and nobody is sure where it's all going.

The Hong Kong International Airport returned to normal operations Wednesday following clashes between protesters and police, according to a CNN team there.

Most flights appeared to be running on schedule based on one of the departure boards at the airport and hundreds of travelers were in the departures hall.

According to the CNN team, the airport was cleaned up and graffiti was covered up with white sheets of paper.