That's the end of our live coverage for now. You can catch up on the full story here.

Police have announced that they are now dispersing protests on the Kowloon side of the city, across the bridge from Hong Kong Island, where most of the day's protests took place. They said protesters were throwing petrol bombs at Nathan Road in Tsim Sha Tsui, and that police were using "appropriate force" to disperse the protestors.

Police also remind the members of the public in the area to stay tuned to the latest situation, keep their windows shut and stay indoors, if necessary.

Every few minutes the air rings out with an explosion as police release another tear gas round. Small fires burn every few hundred meters, and the air smells of tear gas, burning rubber and petrol.

It's tense on Hennessy Road in Causeway Bay, as water cannon vans and lines of riot police make their way down the road. Meanwhile small groups of protesters charge forward throwing petrol bombs and banging poles. It's loud with chants, metal clanging and the sirens of the police vans.

In one heated moment, police fired rounds of tear gas and rubber bullets, and protesters charged and retreated. But the stand-off is back on now, as both sides regroup.

Police and protesters are in a standoff on Hennessy Road outside Hysan Place.

Police fired teargas and rubber bullets as protesters advanced towards them, some throwing petrol bombs.

Protesters have been pushed into Causeway Bay and are continuing eastward on Hennessy Road as police continue to advance.

The huge police presence is moving much faster than in previous weeks, aided by water cannon, tear gas and protesters' own quick retreat.

It's unclear where protesters are heading. On previous occasions they have sought to frustrate police by constantly changing location, causing significant disruption while staying a step ahead the authorities. 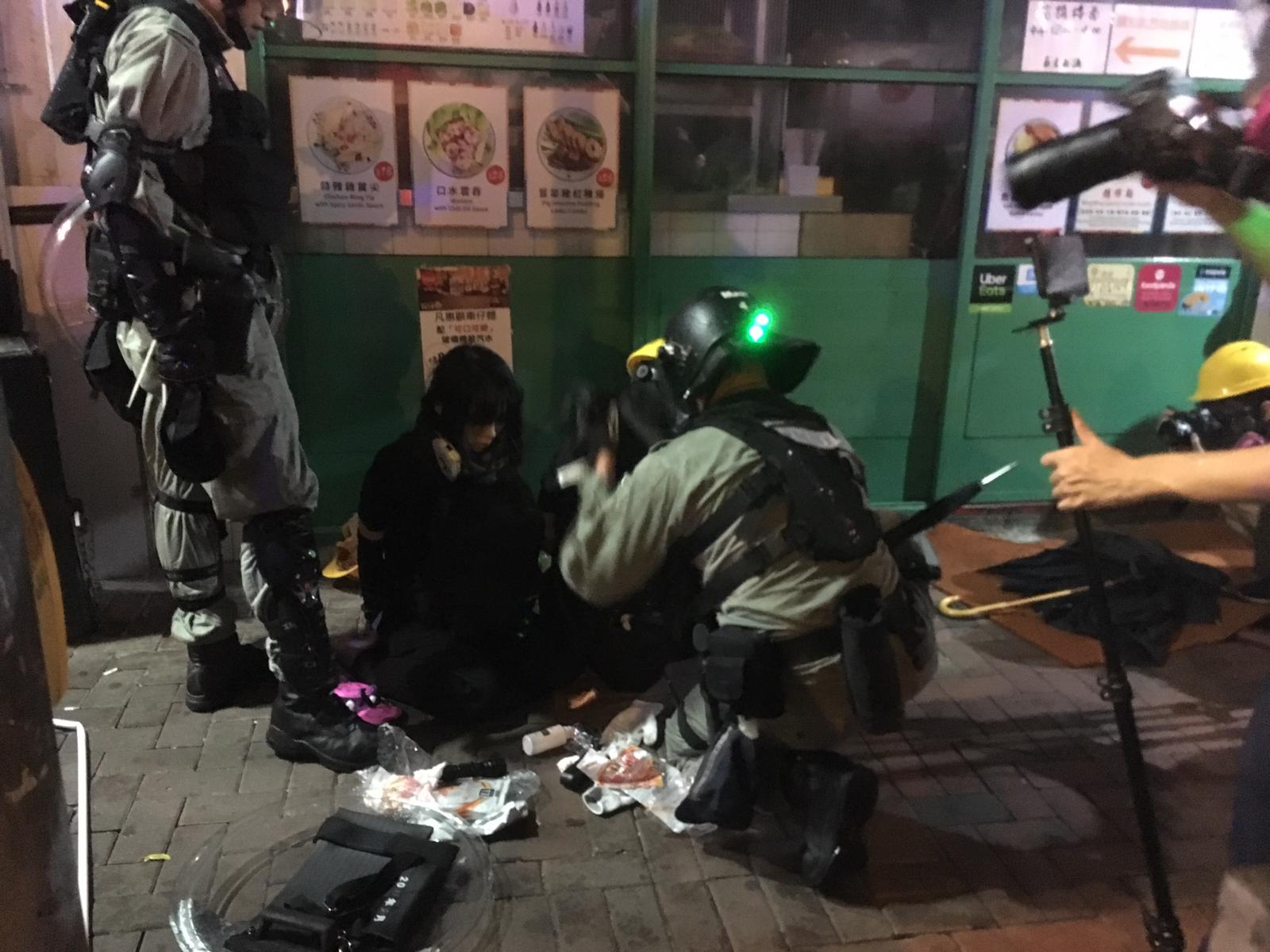 Police could be seen searching detained protesters' bags -- one was carrying an American flag -- and piling them into a van.

The number of police deployed tonight, as well as the use of blue dye to mark protesters, may suggest they are planning to make many more arrests. 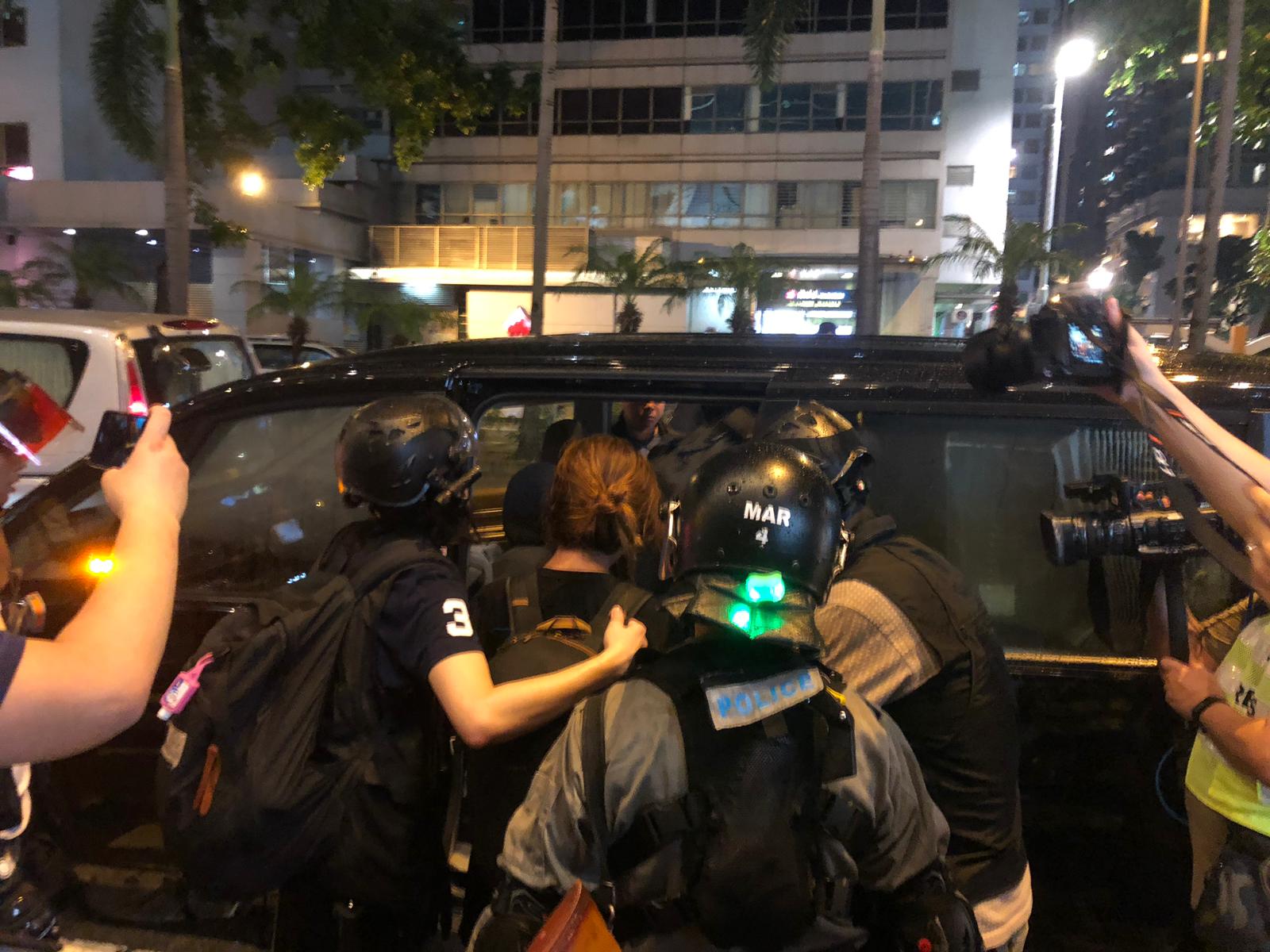 The large fire set by protesters on Hennessy Road has been extinguished. Riot police are now heading east through Wan Chai and towards Causeway Bay, where the main group of protesters has retreated.

There are hundreds of police on the streets, supported by two large riot trucks armed with water cannon. 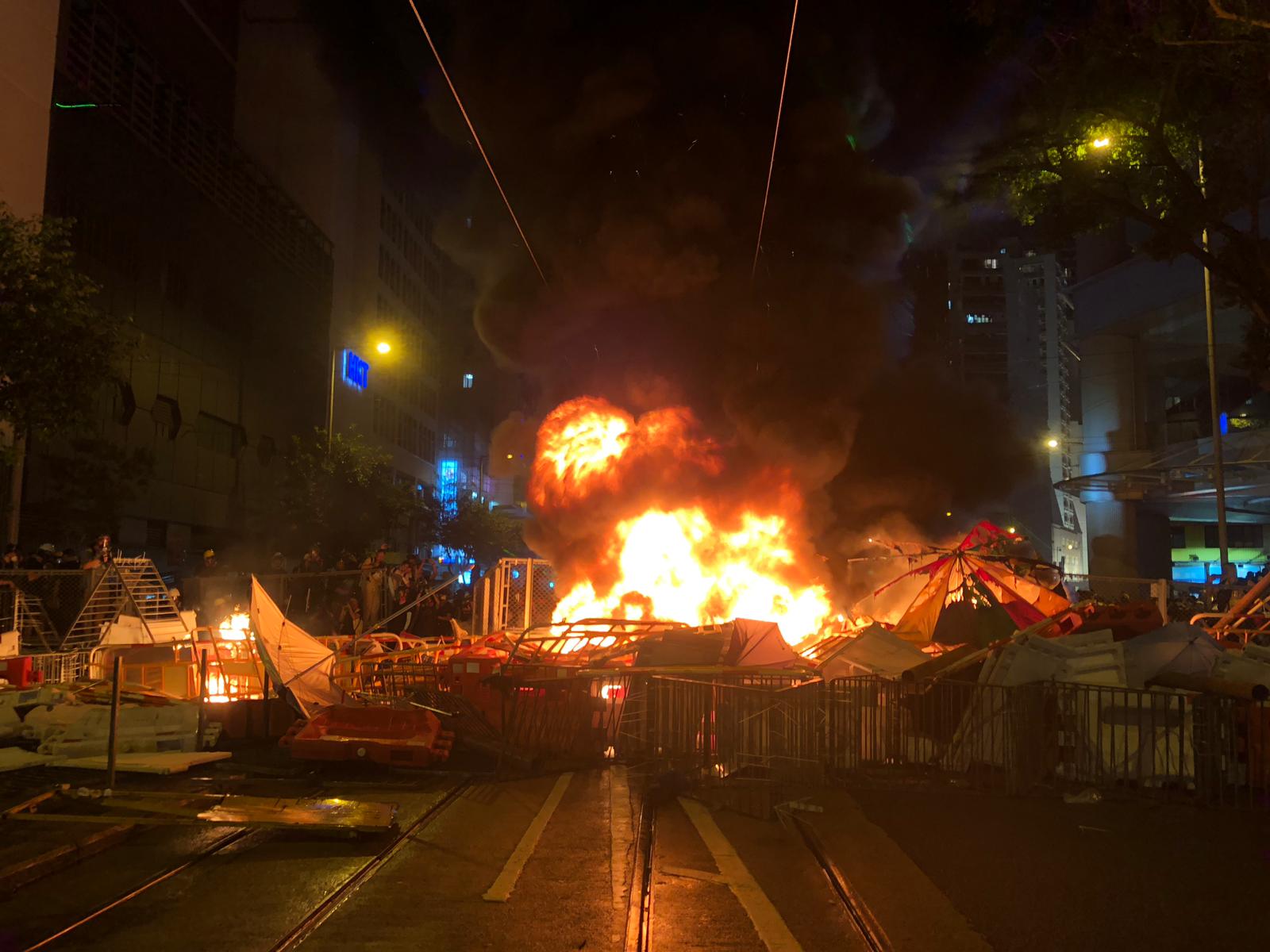 Protesters on Hennessy Road in Wan Chai, where many retreated from police clearance operations in nearby Admiralty, have set fire to a large pile of barricades and umbrellas.

The heat coming off the blaze is immense, and it's unclear whether the blaze could go out of control. Thick black smoke was filling the air as the flames licked an electric tram wire overhead.

Hong Kong's thirteenth consecutive weekend of protests devolved into violence as the sun began to go down. Here's what happened earlier:

Petrol bombs thrown at police: Protesters who gathered in Wan Chai near police headquarters threw water balloons filled with paint and petrol bombs onto the building.

Police fire tear gas and water cannon: Outside the main government offices on Harcourt Road and Tim Wa Avenue, where a large crowd of protesters had blocked the road, police fired tear gas and a water cannon to clear them. Protesters responded with petrol bombs and bricks but eventually scattered.