Protesters have pulled up piles of bricks from the sidewalks around the protest site. The young men at the scene did not want to be identified but said they will use the bricks to "protect themselves" and "block the road."

Three separate people admitted to digging up the bricks because they were "angry" but said they wouldn’t throw them at police because it would "damage their credibility." 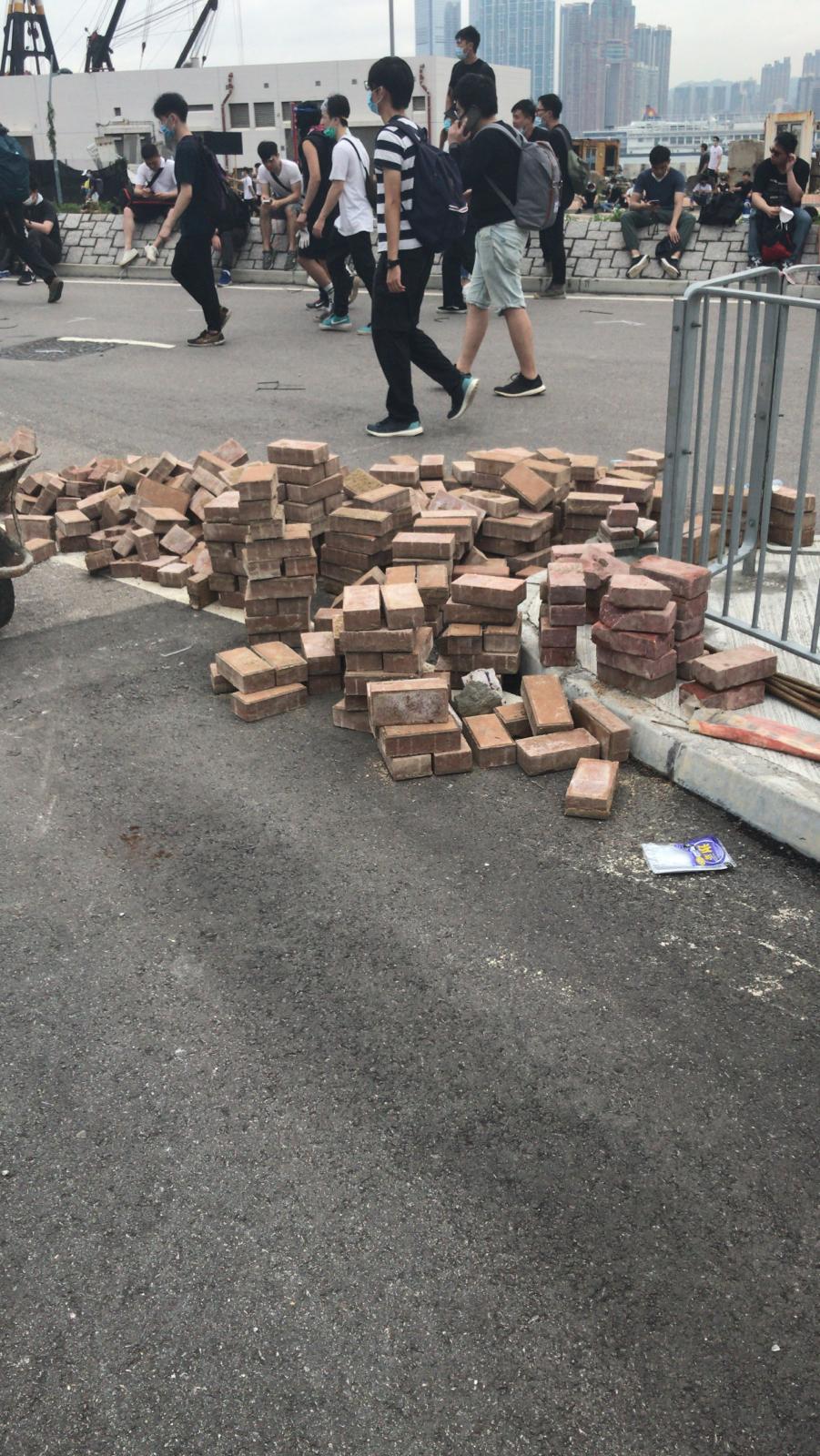 Protests today have so far centered on the roads leading to the Legislative Council building, known locally as LegCo, in Central Hong Kong.

Large crowds, numbering in the thousands, currently occupy parts of Harcourt Road, Tim Mei Avenue and Lung Wo, with Tim Wa Avenue being completely closed off by police. 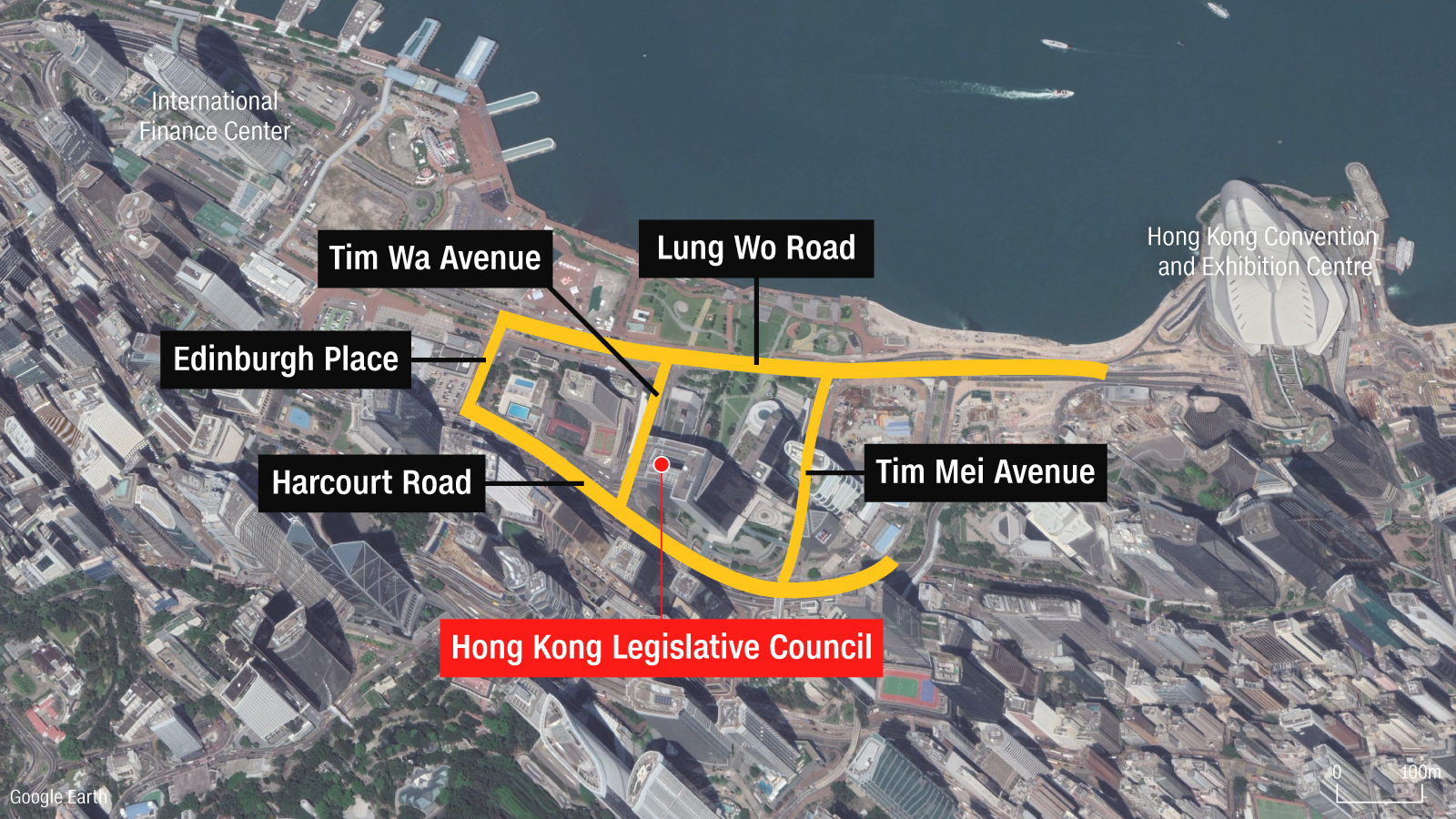 According to Cheng Chung-tai, a localist lawmaker from the Civic Passion party, today's Legislative Council meeting was postponed " because of traffic issues."

“I think the meeting is postponed because of traffic issues. If the government insists to put the bill on the council, then in principle we have the handle the bill. So I think the Hong Kong government really needs to take back the bill so as to avoid more violence or serious protests.

I think this morning, the protests are not that serious. It seems like the Hong Kong government and the police might have some strategy to plan for the next action, so I’ll say the more people the more safety for the crowd and the protesters.”

The Hong Kong government postponed the second reading and debate of the extradition bill, saying the scheduled 11 a.m. local time (11 p.m. ET) start would be changed to a "later time."

Protester Sunny Chan, 18, said many people are demonstrating today because they say the government did not pay attention to massive protests on June 9, when more than a million people marched through the streets against the controversial extradition bill.

Police have begun using pepper spray in a bid to push back protestors on the corner of Harcourt Road and Tim Wa Avenue, near to the entrance of the Legislative Council.

The tactic, however, appears to have little or no effect on those in the crowd, many of whom have come wearing protective masks and headgear.

The numbers of protestors along Harcourt Road, across from the police barricade, now easily exceeds several thousand.

With thousands of well-organized young people taking to the streets, many with umbrellas and masks, there are echoes of the 2014 mass democracy protests that became known as the Umbrella Movement.

For 79 days parts of the city were brought to a standstill as protesters, mainly students, occupied key areas including Harcourt Road -- the site of today's protest.

Since it was used to shield protesters from the tear gas and pepper spray deployed by police on the first day of the 2014 protests, the umbrella has became a ubiquitous sight on the frontlines, and gave the movement its name.

The protest sites were also known for how organized they were, with volunteers handing out food, water, medical supplies, and translation services for media.

Similarities with those protests can be seen in today's gathering, with the use of umbrellas, a supply camp being set up, and protesters reportedly directing foot traffic to help those trying to get to work.

The Hong Kong government have postponed a second reading and debate of the controversial extradition bill.

A press statement, issued by the Information Services Department reads:

Under Rules of Procedure 14(3), the President of the Legislative Council has directed that the Council meeting of June 12 scheduled to begin at 11am today be changed to a later time to be determined by him. Members will be notified of the time of the meeting later.

Protesters have begun to set up a supply camp opposite the Legislative Council building under the Harcourt Road overpass in anticipation of what many are now suggesting could be a lengthy, drawn-out protest.

CNN's Andrew Stevens is at the scene:

"Some have been here for 12 hours and there have been a steady stream of them coming in all morning. What they have done is push out the perimeter of the protest area and are using barricades to block off roads and spread out. The police have raised what’s known as "red flags" -- which is basically a warning to protesters saying, if you charge, we will push back with force -- and that will likely mean tear gas and water cannons.
One of the main arterial roads in Hong Kong, which leads into the city is now blocked by protesters. There is a line of protestors holding umbrellas, facing a group of police. There seems to be a stand off at the moment."