Protests rage across Hong Kong after man shot by police

Speaking to the press Monday afternoon, Hong Kong's Chief Executive Carrie Lam said that the government would not yield to protesters demands.

"If there is any wishful thinking that by escalating violence the (Hong Kong) government will yield to pressure to satisfy protesters' so-called demands, I'm making this clear that will not happen," she said.

Lam added that violence would not offer any solutions "to the problems facing Hong Kong."

"We will spare no effort in finding ways and means that could end the violence in Hong Kong as soon as possible," the city's leader said.

Lam warned members of the public to stay away from areas where "unlawful activities" were taking place.

On Monday, video footage and images from the ground showed people -- many office workers without masks or other protective gear -- coughing and doubled over, with some rushing into a subway station to escape the tear gas. 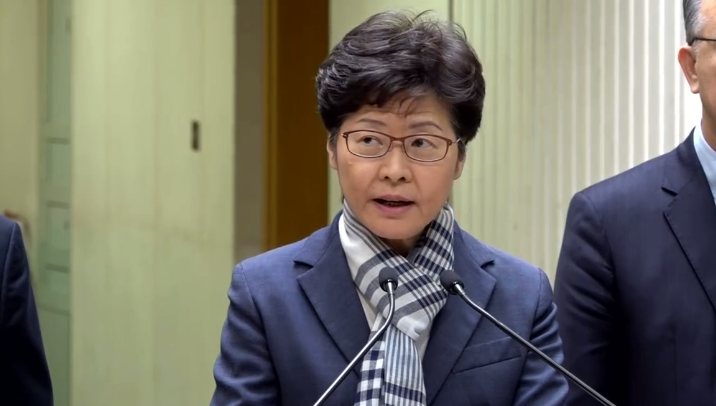 Hong Kong's Chief Executive Carrie Lam condemned the violent scenes across Hong Kong today in a press conference, saying the escalating unrest was bringing Hong Kong "to the brink of no return."

"We are questioning if we can live in this city safely," Lam said.

The ominous message comes after a day of protests around the city, which escalated after police shot a 21-year-old protester with a live round. The protester is currently in hospital in critical condition.

Another person is in critical condition after protesters doused him in a flammable liquid and set him alight.

"This is a blatant breach of peace and rule of law and totally inhumane act that nobody should condone," she said.

Lam said that in total 60 people have been injured through the course of the day Monday.

Hong Kong stocks suffered their worst day in more than three months on Monday as long-running protests in the city saw escalating levels of violence.

The Hang Seng Index dropped more than 2.6%, its worst single-day percentage decline since the beginning of August, according to Refinitiv data.

While Hong Kong led losses in the region, other major Asian markets were all down Monday as investors also tried to make sense of the muddled state of US-China trade relations.

Protests erupted in several districts across Hong Kong Monday, as public anger mounted after the police shooting of a protester early in the morning in eastern Sai Wan Ho district.

Huge crowds marched through Central district, the city's financial center, where police fired tear gas. Video footage and images from the ground shows people -- many office workers without masks or other protective gear -- coughing and doubled over, with some rushing into a subway station to escape the tear gas.

At a press conference Friday afternoon, police said they arrested 266 people between the ages of 11 and 74 years old.

Police also said that protesters had vandalized or blocked roads at 120 locations across the city.

Night is falling in Hong Kong, after a day of violence and mass arrests. If you're just joining us now, here's what you need to know:

Looming over all this was the death of 22-year-old Chow Tsz-lok, who passed away Friday after being hospitalized following a fall in a parking garage near a protest. His death has sparked fury in the anti-government movement, with protesters accusing police of bearing responsibility for the fall and in delaying ambulance access, charges the force denies.

Taiwan President Tsai Ing-wen, who has repeatedly spoken out in favor of the ongoing anti-government protests in Hong Kong, said she was saddened to see "violence against unarmed protesters" today.

"The people of Hong Kong are seeking dialogue and democracy, not beatings and bullets," Tsai wrote on Twitter.

Taiwan -- a self-ruled democratic island off the coast of mainland China -- is preparing for a presidential election in January. The Hong Kong protests have fed into long-running concerns over Taiwan's relationship with China, and multiple politicians from across the political spectrum have said that the "one country, two systems" principle adopted by Beijing when Hong Kong was handed over from the UK in 1997 will never be implemented in Taiwan.

At an ongoing press conference, police responded to accusations that the Independent Police Complaints Council (IPCC) watchdog was not sufficiently equipped to investigate police misconduct.

Police spokesperson Tse Chun-Chung said the police force had a "two-tier mechanism" to handle complaints, and that police provided the necessary support to the IPCC.

"It’s unfair to comment on the content on that findings report before it is published," he said. "IPCC agreed to put out the interim report within 6 months and we should all be patient to give them the time and space to put that report together."

International experts call for inquiry: Over the weekend, a group of overseas experts appointed by the city government said the IPCC did not have the necessary “powers, capacity, and independent investigative capability to match the scale of events."

The experts said in a statement that a more comprehensive inquiry would be needed to establish a representative body of evidence. Protesters have been calling for an inquiry for months -- but city leaders said the IPCC was sufficient.

In response to the experts' statement, the IPCC said it was “disappointed” that they did not consult with the council before making it public, and the Hong Kong government said that the IPCC’s study was “by no means a final report.”

Responding to the shooting of a protester by police this morning, Amnesty International Hong Kong has condemned what it said was a "another shocking low" for the city's police force.

“The live rounds fired by police are clear evidence of reckless use of force," said Man-Kei Tam, director of Amnesty in Hong Kong. "Another policeman was seen driving at high speed into a group of protesters on a motorbike. These are not policing measures -- these are officers out of control with a mindset of retaliation."
Tam added that, "this pervasive, heavy-handed behavior shows the police cannot investigate themselves. Today’s actions again require an urgent independent investigation. The authorities must review their approach to help de-escalate the situation and prevent more lives being put at risk."
“Police officers like the one seen shooting an apparently unarmed protester at point-blank range must be suspended immediately," Tam said. "These behaviours call their training in question and the commands they have been given -- officers should be deployed to de-escalate difficult crowd control situations, not make them worse.”

Police have arrested 266 people today, a spokesperson said at an ongoing press conference.

The people arrested ranged from 11 to 74 years old, Some of the charges include unlawful assembly, possession of offensive weapons, attack of police officers, violation of the face mask ban, and attempted murder.

Police also said that protesters had vandalized or blocked roads at 120 locations across the city.

It's been a long day of violence, tear gas, flash mob demonstrations, general strikes, and disrupted traffic. There have been several incidents of stunning violence, marking new escalations in the movement -- including a man set on fire, a protester shot by police, and a police officer driving his motorcycle into a crowd.