Police in Hong Kong have fired multiple tear gas canisters into crowds of marchers, just hours after tens of thousands gathered to protest alleged brutality on the part of authorities.

Hundreds of police in full riot gear are moving rapidly in attempt to clear the protesters. Crowds are thinning in the face of police measures, but there are still thousands of people on the streets.

Currently both sides are in a standoff on Castle Peak Road, with neither group willing to retreat.

The march was technically an illegal gathering after police refused to issue a letter allowing it to go ahead. But the protest had been peaceful before the attempts to clear it.

Protesters who remain on the front line are putting on hardhats and masks, with some carrying homemade wooden shields. 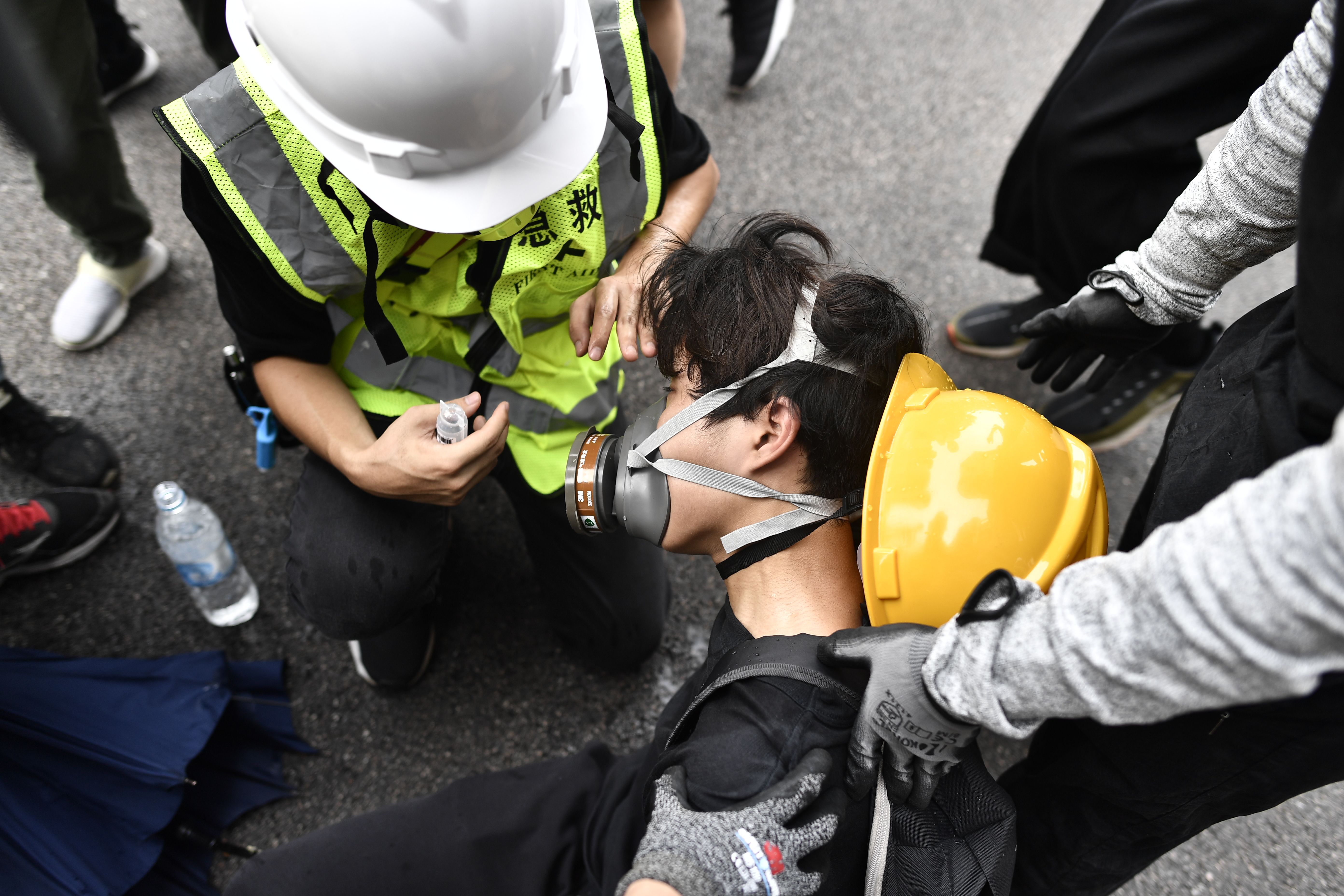 Frantic scenes are developing on the streets of Yuen Long, as what had been a largely peaceful demonstration descends into violence.

Groups of marchers have begun to push back against advancing lines of riot police, throwing anything they can get their hands on -- including plastic stools, umbrellas and water bottles.

In Yuen Long's relatively narrow streets, protesters have few options on where to go, as police attempt to disperse the bulk of the crowd.

There are currently more than a hundred riot police on the streets. Tear gas and pepper spray have both been deployed. It isn't clear what led police to move so quickly against protesters.

Dozens of police vans have also now pulled up in the street.

Police have fired tear gas at thousands of protesters who gathered in northern Hong Kong Saturday.

The relatively narrow streets are still packed with people and it isn't clear where they're going to go as police attempt to push them back.

There had been little violence ahead of the police action but the march itself was technically an illegal gathering after law enforcement refused to issue a letter permitting it.

Police have raised a black banner warning protesters that they are prepared to use tear gas, amid a rapid escalation in tensions at today's march.

Dozens of police dressed in full riot gear have begun to walk quickly towards the protesters, carrying shields, in an attempt to disperse the crowds.

But there are still tens of thousands of marchers gathered in what is a very compact area.

Dozens of police armed with riot shields have begun to arrive at what until now has been a largely peaceful assembly.

Today's march is technically against the law, given police never issued a letter allowing it to take place, making it an illegal gathering.

But there are still tens of thousands of protesters packing the streets of Yuen Long, making it unclear what strategy police are hoping to deploy.

Some protesters have dressed in mock riot gear in front of the police, complete with wooden shields.

The situation has become tense, with neither side appear willing to back down.

On July 21, after a demonstration in downtown Hong Kong against a now-shelved extradition bill was broken up by police, protesters returning to Yuen Long were attacked by a mob wielding iron bars and bamboo sticks.

Footage of the attack posted on social media showed the marauding masked gang, wearing white T-shirts, attacking crowds on the platform and inside train carriages at Yuen Long MTR station, in the far northwest of the semi-autonomous Chinese city.

About a dozen men have been arrested in connection with that violence, some of whom have links to organized crime groups, or triads. Protesters were reportedly at the mercy of the mob for almost an hour before police arrived and at least 45 people were injured, some seriously.

Many had wondered whether a potential repeat of last Sunday's violence would dissuade people from joining today's march.

That doesn't appear to have happened, with tens of thousands making the journey to the far northern town to participate in today's march.

The possibility of more triad violence has also yet to materialize, with protesters marching unimpeded.

The march was earlier declared illegal by the Hong Kong police who refused to give it permission to go ahead. Despite its apparent unlawfulness, there has been no effort to break it up so far.

But dozens of police vehicles and vans have been seen gathering on the edges of the protest. Large numbers of riot police are also patrolling the route.

Just after 4.30 p.m. local time, some police raised a banner warning not to cross their cordon.

Today's protest is technically an illegal gathering after police refused to issue a letter allowing it to go ahead.

As a result, protesters began to look for ways to get around the police refusal.

Some suggested it could be a religious gathering, which under Hong Kong law wouldn't be considered illegal.

Today's protest is currently being led by a Christian priest in the hope he can offer some protection to the march.

Another, somewhat audacious suggestion to get around the problem was for the march to be held in memory of former Chinese Premier Li Peng, who died on Tuesday.

Li was one of the most prominent hardliners in the Communist Party and is believed to have been an enthusiastic proponent for the crackdown on pro-democracy protesters in Tiananmen Square in 1989, which left hundreds dead.

It's unlikely today's march would have been the memorial he'd envisioned for himself.

As violence escalates in Hong Kong, many fear that China's military will be deployed to stifle protests in the city -- and now, United States congressmen are getting involved.

Rep. James McGovern of Massachusetts and Sen. Marco Rubio of Florida, chair and cochair of the Congressional-Executive Commission on China (CECC), issued a joint statement on Wednesday urging the Trump administration to condemn the threat of Chinese military intervention.

“Threats of intervention by the People’s Liberation Army (PLA) in Hong Kong are unacceptable and needlessly escalate tensions. Escalation of violence – whether on the part of organized crime thugs or the PLA – will only further undermine Hong Kong’s autonomy and rule of law," the joint statement read.

They added they "stand with those in Hong Kong who are peacefully promoting democratic principles and the rule of law," and urged the administration to "condemn any threats to Hong Kong citizens and U.S. residents of Hong Kong."

Local fears of the Chinese military were stoked this week, when a Chinese spokesperson said the PLA was watching the situation in Hong Kong closely, and pointed to a Hong Kong law that allows the local government to request military assistance in maintaining public order.

In just two hours, a street in the northern Hong Kong town of Yuen Long has become a sea of umbrellas.

There two photos taken just two hours apart, show how many people have come out for the eighth-week in a row to protest against the government and attacks on marchers.

The protest, which was not given police permission to go ahead and is technically unlawful, is expected to continue down Castle Peak Road to the Yuen Long MTR station, around 1.6 kilometers (1 mile) from where the march began.