Indian Prime Minister Narendra Modi was poised for a landslide victory in the country's general elections, early results showed on Thursday, defying expectations of even his own party to win a second term in office.

In case you missed it, here's more on the elections:

The Election Commission of India has announced that Indian Prime Minister Narendra Modi’s Bharatiya Janata Party (BJP) has won 274 constituencies, taking it over the threshold of 272 required for an absolute majority.

In order to win, BJP needed to secure 272 seats out of 543 in the Lok Sabha, or lower house of parliament, to form a government.

BJP is leading in 51 seats and has outright won 251, bringing the total to 302, according to the Election Commission of India.

In order to win, a party or a coalition needs to secure 272 seats out of 543 in the Lok Sabha, or lower house of parliament, to form a government. If the projections are accurate, Modi's BJP looks set to win outright, without support from his coalition.

"I warmly express my gratitude for your good wishes. I have always given primacy to peace and development in our region," Modi tweeted.

Relations between the two countries have been strained in recent weeks after military standoff. The trigger was a devastating terrorist attack on Indian forces in the disputed Kashmir region in February.

The bombing was followed by the first aerial confrontation between the countries in several decades, something that was held up by Modi's allies as proof that he was only leader who could effectively respond to terror threats that Delhi says emanate from Pakistani soil, a claim refuted by Islamabad. 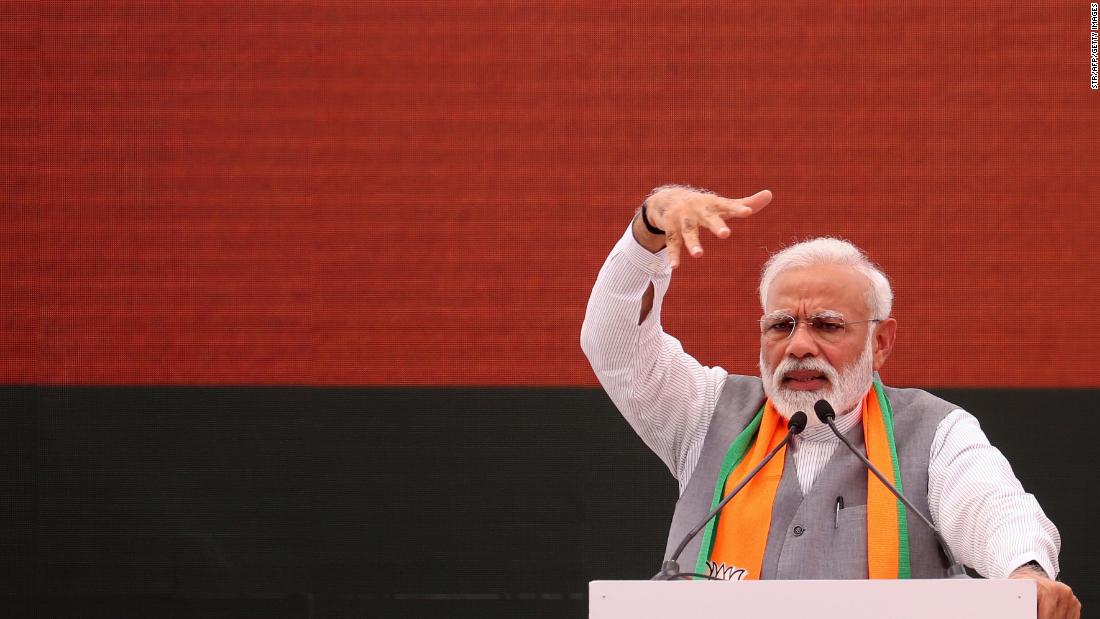 Indian Prime Minister Narendra Modi was poised for a landslide victory in the country's general elections, early results showed, defying expectations of even his own party to win a second term in office.

"You have seen that from 2014 to 2019, the people who used to talk about secularism have now gone quiet. In this election, not one political party has been able to deceive the people of India by wearing the label of secularism," Modi said in his victory speech at Bharatiya Janata Party (BJP) headquarters in New Delhi.

Now India's 200 million Muslims, who probably flooded to the secular Indian Congress Party, have a dwindling voice as the Congress barely survived as a credible opposition.

President Trump took to Twitter to congratulate Indian Prime Minister Narendra Modi, who was poised for a landslide victory in the country's general elections.

Trump went on to say that he was looking forward to working with Modi.

"Great things are in store for the US-India partnership with the return of PM Modi at the helm," the US President tweeted.

In his victory speech at BJP headquarters in New Delhi, Narendra Modi said his win is a "guarantee of a bright future for the common people of this country."

"I want to bow my head before the 1.3 billion people of this country.
The largest number of votes have been cast in this election. This in itself is because of the awareness of the people of the country, the democracy and the secularism of the country.
The world will have to acknowledge this -- to understand the democracy that is India.
This election is being fought by the people. If anyone has won, it is India. We dedicate this victory to the people of India."

Modi then promised to continue the development work his party has started, saying that this is the "21st century and it is a new India."

"This is not Modi’s victory, this is the victory of the hopes and dreams of the struggling people of the country.
This is the win for the women who have been waiting for toilets.
This is a win for the farmers of this country who work hard to fill the stomachs of the people of the country.
I want that the people who want a bright future for this country despite the government that comes to power – for the future of the country, its unity and diversity – this election has set a new narrative.
This new narrative means that in this country that there will be only two castes and the country will be built only on those two castes.. Those two are the poor and the ones who contribute to the uplift the poor."

Modi said the people should "accept this election with love."

"Governments are made with a majority and the public has made it too, but the spirit of a democracy, the spirit of the constitution gives us the responsibility that even if the government is built with a majority, the country runs with everyone together.
We will walk with everyone together. We will go ahead for the good of the country and even with this massive mandate, we should walk with love.
Our constitution is the most important and we should follow the letter of the constitution and in its shadow.
The country has given us a lot, and I want to assure the people that you have filled the lap of this beggar. You have filled it with a lot of hopes and dreams."

Indian Prime Minister Narendra Modi has comfortably won in his constituency of Varanasi, in Uttar Pradesh state, with 63.62% of the vote.

The Prime Minister tweeted his thanks to the "people of Kashi," the ancient name for Varanasi.

Varanasi was among the last constituencies to go to the polls on May 19, in the seventh phase of India's marathon election.

CNN visited the city to examine how life has changed since he came to power -- and whether he was able to keep his previous election promises. Read more on that here.