In a statement the human rights organization warned that the Indian government's unilateral decision to revoke the status without consulting stakeholders in the territory "is likely to inflame prevailing tensions, alienate the people in the state and increase the risk of further human rights violations."

Amnesty said that a blackout of telecommunications was "not in line with international human rights standards."

"These shutdowns affect the ability of people in Kashmir to seek, receive, and impart information, which is an integral part of the right to freedom of expression. These blackouts also impede the ability of friends and relatives to reach out and inform about their safety further increasing tensions and feelings of insecurity," the statement said.

Article 370 has been a bone of contention in Indian politics for years.

Introduced in 1949, it deals with special powers conferred upon Jammu and Kashmir state -- which encompasses the section of the disputed Kashmir region controlled by India -- enabling it to have its own constitution, flag and autonomy over all matters except certain policy areas such as foreign affairs and defense.

Revoking it was one of the BJP’s promises in the recently concluded Indian general elections.

“In the last five years, we have made all necessary efforts to ensure peace in Jammu and Kashmir through decisive actions and a firm policy…We reiterate our position since the time of the Jan Sangh (an earlier rightwing political that merged to form the current BJP) to the abrogation of Article 370,” the party stated in its manifesto for the 2019 general elections.

Under normal circumstances, in order to make a constitutional change such as this, the state’s local legislature would need to be consulted. But Jammu and Kashmir doesn’t have one at the moment.

Last June, the BJP pulled out of a coalition government with Kashmir’s People's Democratic Party (PDP) and the state was put under the rule of the governor — the constitutional representative of India’s president, which in effect handed rule directly to the government in Delhi.

That’s allowed Delhi to move ahead with the scrapping of Article 370 without the backing of local politicians in Indian-controlled Kashmir, according to Happymon Jacob, a professor at Jawaharlal Nehru University who has written extensively on India and Pakistan.

“These decisions require constitutional amendments, which cannot be done with a Presidential Order, which is what they have done but it has a weak legal foundation. It will be challenged in court but I don’t think the BJP is worried about this. They will fight it out, it will go on for a long time, and in the mean time they will come [with] radical changes in the state,” Jacob told CNN.

“At the moment, there is no legal opposition. There is only the governor who can oppose it but he is Home Ministry-appointed."

What else is Narendra Modi's government doing?

In addition to revoking Article 370, the government also said it would bring measures to modify the administrative status of Jammu and Kashmir. So far, it has been classed as a state but now it will become a union territory, giving the government in Delhi greater authority over its affairs.

“We don’t have any examples where a state has been downgraded to a union territory. The fact that you have changed the politics in Jammu and Kashmir so radically and fundamentally is surprising," Jacob said.

"They have gone about doing that because once a state becomes centrally-administered, you don’t have to go through the state assembly for any decision-making power."

Under the plans, the remote mountainous region of Ladakh, currently part of the state of Jammu and Kashmir, would be separated and turned into a standalone union territory.

Mehbooba Mufti, a former chief minister of Jammu and Kashmir and one of those reported to have been placed under house arrest, criticized Indian Prime Minister Narendra Modi on Monday.

In a followup tweet, Mufti wrote that there had been hope Modi would be like former prime minister Atal Bihari Vajpayee, who passed away last year.

Kashmir is one of the world's most dangerous flashpoints. Claimed in its entirety by both India and Pakistan, it has been the epicenter for more than 70 years of an often violent territorial struggle between the nuclear-armed neighbors.

Predominantly-Hindu India and Muslim-majority Pakistan have fought three wars since 1947, when the two nuclear powers both gained independence from the UK.

This toll doesn't include people who have disappeared due to the conflict, and some human rights groups and nongovernmental organizations put the death toll at twice that amount.

So why does the mountainous region mean so much to the two countries?

Kashmir initially remained independent and was free to accede to either nation. When the Hindu king of Kashmir chose to join India in exchange for military protection, Jammu and Kashmir state became the only Muslim-majority state in the country.

Jammu and Kashmir covers around 45% of Kashmir, in the south and east of the region, while Pakistan controls Azad Kashmir, Gilgit and Baltistan -- which cover around 35% of the total territory in the north and west. Both countries claim complete ownership of Kashmir; also in the picture is China, which controls around 20% of Kashmir territory known as Aksai Chin. 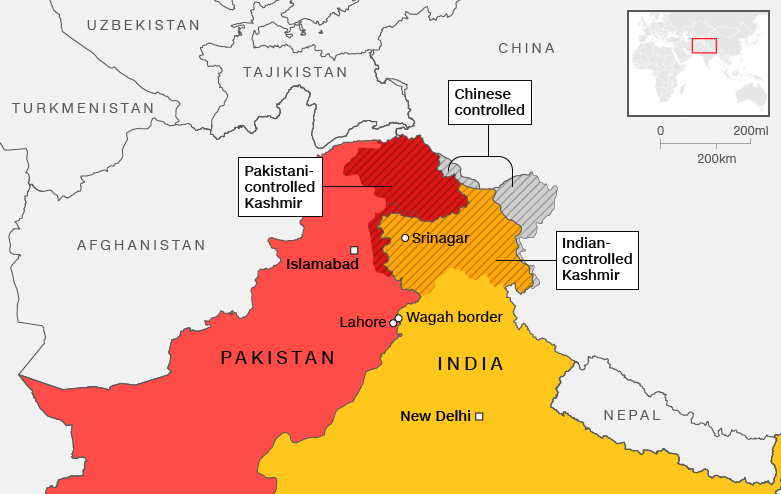 The issue is also one of the oldest items on the agenda at the United Nations, where India and Pakistan took their dispute soon after independence.

Both countries agreed to a plebiscite in principle, to allow Kashmiris to decide their own future, but it has never been held because it was predicated on the withdrawal of all military forces from the region, which has not happened even decades on.

Both countries have maintained a fragile ceasefire since 2003, according to the Council on Foreign Relations, although the two rivals regularly exchange fire across the border.

India's moves to change the way Indian-controlled Kashmir is administered comes amid a security crackdown in the state. Recent days have seen an influx of tens of thousands of new troops into what is already one of the most militarized places in the world.

Measures to prevent public meetings across the territory were put in place, and a broad communications blackout left residents without access to the internet and phone services.

A number of prominent politicians were also placed under house arrest.

Pakistan has slammed India's moves to revoke the special status in the disputed region of Kashmir.

The country's Ministry of Foreign Affairs said it "strongly condemns and rejects the announcements made today by the Indian Government regarding the Indian Occupied Jammu & Kashmir" in a press release Monday.

“The Indian Occupied Jammu & Kashmir is an internationally recognized disputed territory. No unilateral step by the Government of India can change this disputed status, as enshrined in the United Nations Security Council (UNSC) resolutions. Nor will this ever be acceptable to the people of Jammu & Kashmir and Pakistan. As the party to this international dispute, Pakistan will exercise all possible options to counter the illegal steps. Pakistan reaffirms its abiding commitment to the Kashmir cause and its political, diplomatic and moral support to the people of Occupied Jammu and Kashmir for realization of their inalienable right to self-determination,” the statement said.

India's government announced on Monday changes to the way Indian-controlled Kashmir is administered, scrapping provisions giving the region special status and proposing measures to increase Delhi’s authority across the territory.

In place since 1949, Article 370 gives the Indian state of Jammu and Kashmir -- which includes Indian-controlled Kashmir -- the power to have its own constitution, flag and autonomy over all matters except foreign affairs, defense and communications.

In addition, Shah said the government would move to modify Jammu and Kashmir’s position in the Indian constitutional system. Currently classed as a state, it would become what under India’s constitutional rules is known as a union territory -- a step that would give the government in Delhi greater control over its affairs.

In the Indian system, state governments retain significant power over local matters. But the central government in Delhi has more of a say in the affairs of a union territory. The remote mountainous region of Ladakh, currently part of the state of Jammu and Kashmir, would be separated and turned into a standalone union territory, the government said.