Our live coverage of Cyclone Amphan has moved here.

These are the latest updates on the cyclone: 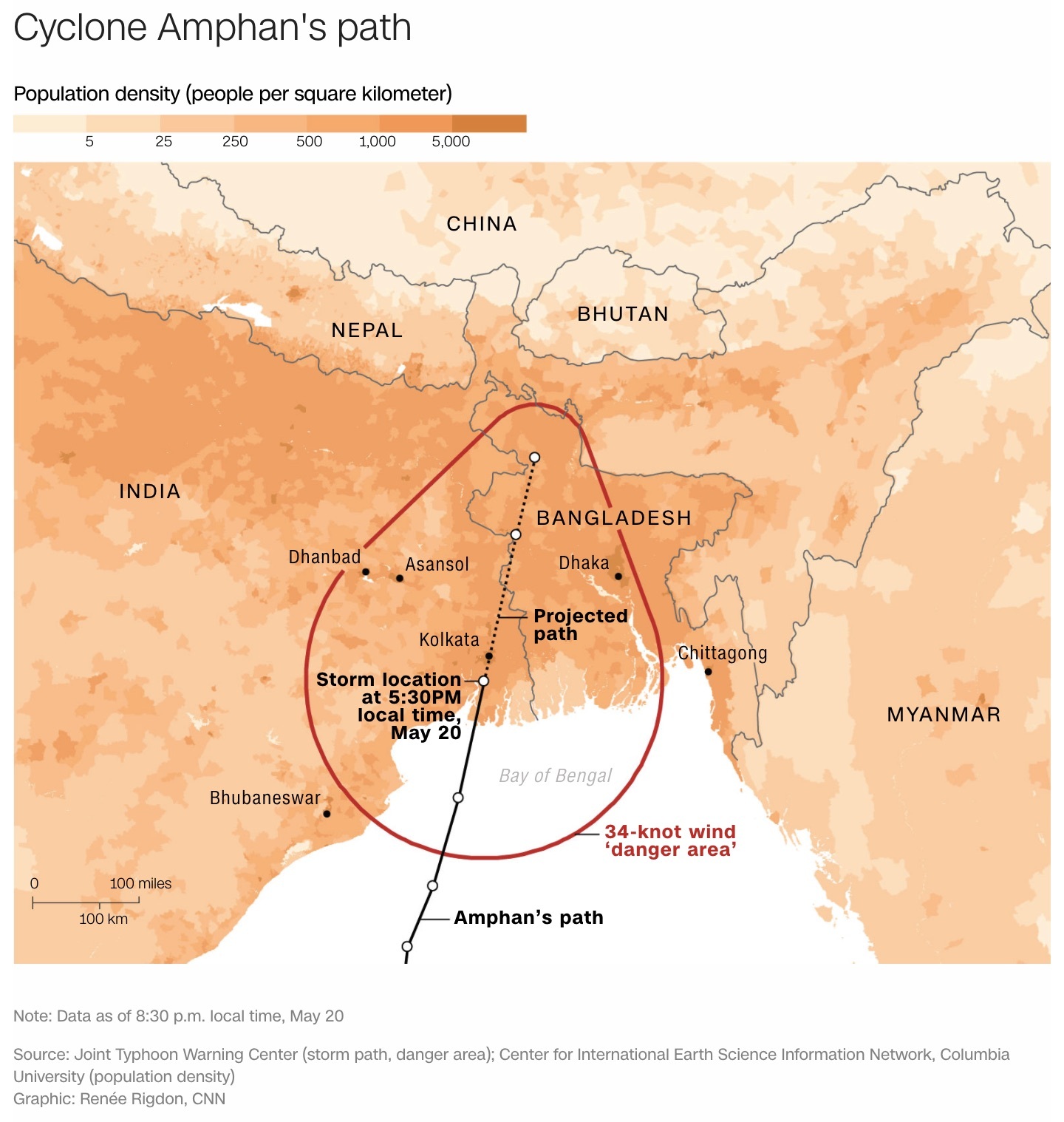 "The whole of the southern part of the state has been affected. We are shocked. It will take three to four days to asses the damage," the chief minister said Wednesday at a news conference.

"The cyclone has affected the electricity supply and destroyed many houses, bridges and embankments," she added.

According to Banerjee, about 500,000 people have been evacuated to shelters by the state administration.

Banerjee confirmed that at least 12 people have died in eastern India after Cyclone Amphan made landfall there.

At least 12 people have died in India after Cyclone Amphan made landfall earlier today, authorities said.

All the reported deaths took place in the eastern Indian state of West Bengal, according the state chief minister Mamata Banerjee.

Banerjee said one of the victims, a girl in the Howrah district, died after a wall from her house collapsed. She did not provide any further details how the rest of the deaths occurred.

Bangladesh Oxfam director, Dipankar Datta, told CNN that thousands of makeshift homes in Bangladesh have been uprooted due to the cyclone. He added that he does not expect the storm to hit the Rohingya refugee camp area in Cox’s Bazaar.

Some background: Cyclone Amphan made landfall near Sagar Island in West Bengal, India, close to the Bangladeshi border around 5 p.m. local time with sustained winds of 160 kilometers per hour (100 mph), according to the US Joint Typhoon Warning Center, making it equivalent in intensity to a category 2 Atlantic hurricane.

Heavy rain is expected to lead to flash flooding across the region through Thursday morning. Once the storm pushes inland, it will weaken significantly and the storm is expected to dissipate by Friday.

Officials in Bhadrak, a city in the Indian state of Odisha, have evacuated 218 Pregnant women from the area's coastal villages to health centres, the Indian government has said.

The Indian government said on Twitter that 60 of the evacuated women gave birth on May 19 and 20 under special medical care, as officials braced for the cyclone.

A Bangladeshi official has claimed that Cox's Bazar, a series of camps housing nearly one million Rohingya refugees, is prepared for Cyclone Amphan.

"For the cyclone we are prepared. We have tightened the huts of the refugees," Refugee Relief and Repatriation Commissioner Md. Mahbub Alam Talukder told CNN.

"All 32 camps have trained volunteers ready. We have mosques and other learning center[s] if we need to relocate the refugees for safety."

“Today the weather was very cloudy and gloomy. The weather is too bad and [we] were not happy with the cyclone," Amir Hossain, a Rohingya refugee at the Kutupalong camp, told CNN.

"If the cyclone hit the camp all the refugees will be in the danger as our huts are weak.”

Officials at Cox's Bazar were already grappling with the threat of coronavirus before the storm hit.

The first known Covid-19 cases were confirmed in the camp last week.

Thousands of Indian migrant workers attempting to return home to the country's Odisha state remain stranded after the cyclone forced the cancelation of special trains to the region, a senior railways official has said.

Migrant workers across India have been out of work and away from home since March 25, when a nationwide coronavirus lockdown came into effect.

Special trains had been designated to take the workers home, but 15 scheduled to run along Odisha's coastal region were suspended from May 19 to 21, railway spokesperson J.P. Mishra said.

“We hope to resume trains for coastal Odisha as soon as the cyclone subsides,” J.P Mishra told CNN.

The local government will loosen some COVID19-related travel restrictions to allow the flow of aid and support for those evacuated from the cyclone's path, Mishra added.

Of Odisha's 809 permanent cyclone shelters, 211 are currently being used as COVID-19 quarantine centers. Schools and colleges have been converted to fill that gap.

Women and girls living in the Cox's Bazar refugee camp in Bangladesh are vulnerable to an increase in gender-based violence, as the cyclone and coronavirus threaten their security, the International Rescue Committee's Bangladesh director, Manish Agrawal, has said.

The sprawling camps of Cox's Bazar are home to nearly one million stateless Rohingya refugees. While the camps on Bangladesh's east coast aren't directly in the cyclone's path, they are likely to be hit by severe weather.

"Life could not be more precarious for the nearly half a million women and girls who are already trapped in their homes as well as the children who make up over half of the camp’s residents," Agrawal said.

"Many of them have experienced gender-based violence, often at the hands of their partners, and now they risk having their homes uprooted to be forced into more condensed spaces."

He added that an "unimaginable" strain would be put on relationships and families in the camp "and there is a real risk that gender-based violence will increase as the cyclone takes hold.”

Cyclone Amphan has made landfall near Sagar Island in West Bengal, India, close to the Bangladeshi border.

The storm made landfall around 5 p.m. local time with sustained winds of 160 kilometers per hour (100 mph), according to the US Joint Typhoon Warning Center, making it equivalent in intensity to a category 2 Atlantic hurricane.

The center of the cyclone is currently 80 km south of Kolkata, West Bengal's capital, which has observed wind speeds up to 105 kph already.

Storm surge up to 5 meters (17 feet) is likely occurring along the coastline as Amphan continues to push inland across eastern India and Bangladesh.

Heavy rain is also likely to lead to flash flooding across the region through Thursday morning. Once the storm pushes inland it will weaken significantly and is expected to dissipate by Friday.