Marchers gathered in Paju, not far from the demilitarized zone (DMZ), a day before the summit to call for peace.

More than 500 women from the International Women's Peace Group chanted, "We are one."

President Moon Jae-in has exited his motorcade and is getting ready for the summit. We're fewer than 20 minutes away from the expected handshake.

The late South Korean Presidents Kim Dae-jung and Roh Moo-hyun each traveled to Pyongyang for inter-Korean summits in 2000 and 2007, respectively.

Both walked away with a handful of agreements, but the good will didn't last.

Still, experts say there are important lessons Moon and his administration can take from his predecessors' successes and failures.

Here's what happened in past summits:

South Korean President Moon Jae-in has arrived in the demilitarized zone. He's expected to shake hands with Kim Jong Un within the hour.

South Korean President Moon Jae-in's motorcade has crossed the Unification Bridge, which is close to the DMZ.

Though they don't have to deal at all with traffic, the journey is taking a bit longer than expected, according to CNN's Paula Hancocks. She is on the ground near the bridge.

Evans Revere, a former deputy chief of mission and chargé d'affaires of the US Embassy in Seoul, spoke to CNN from Seoul about what to expect on at the summit.

He said the mood in some corners of South Korea is "optimistic bordering on euphoric."

"It’s pretty clear it’s not just the media here but the South Korean government that’s looking very openly and positively at this event," Revere said. “Expectations have been seriously elevated and whenever you have a situation like that, you really need to step back and reflect on what are the expectations.”

Revere said he was concerned that the dialogue coming from the North Korean leader Kim Jong Un's regime has been too vague, a problem diplomats encountered during previous attempts at rapprochement with Pyongyang.

“The core issue going forward is going to be the one that we began with -- which is is the North Korean leader, is North Korea serious about going down the path of denuclearization? And my answer to that is I don’t know," he said.

"I suspect they may not be, but let’s hope that the North Koreans come to the table on Friday and say, 'We are serious and here’s evidence that we’re prepared to go down that path.' I’ll be the happiest man in the world if they come to the table and say something along those lines. But based on previous experience, I suspect they won’t.”

Rodong Sinmun, the official newspaper of the Workers' Party of Korea (the main political party that runs North Korea), carried the news of the summit as their top story in today's paper. 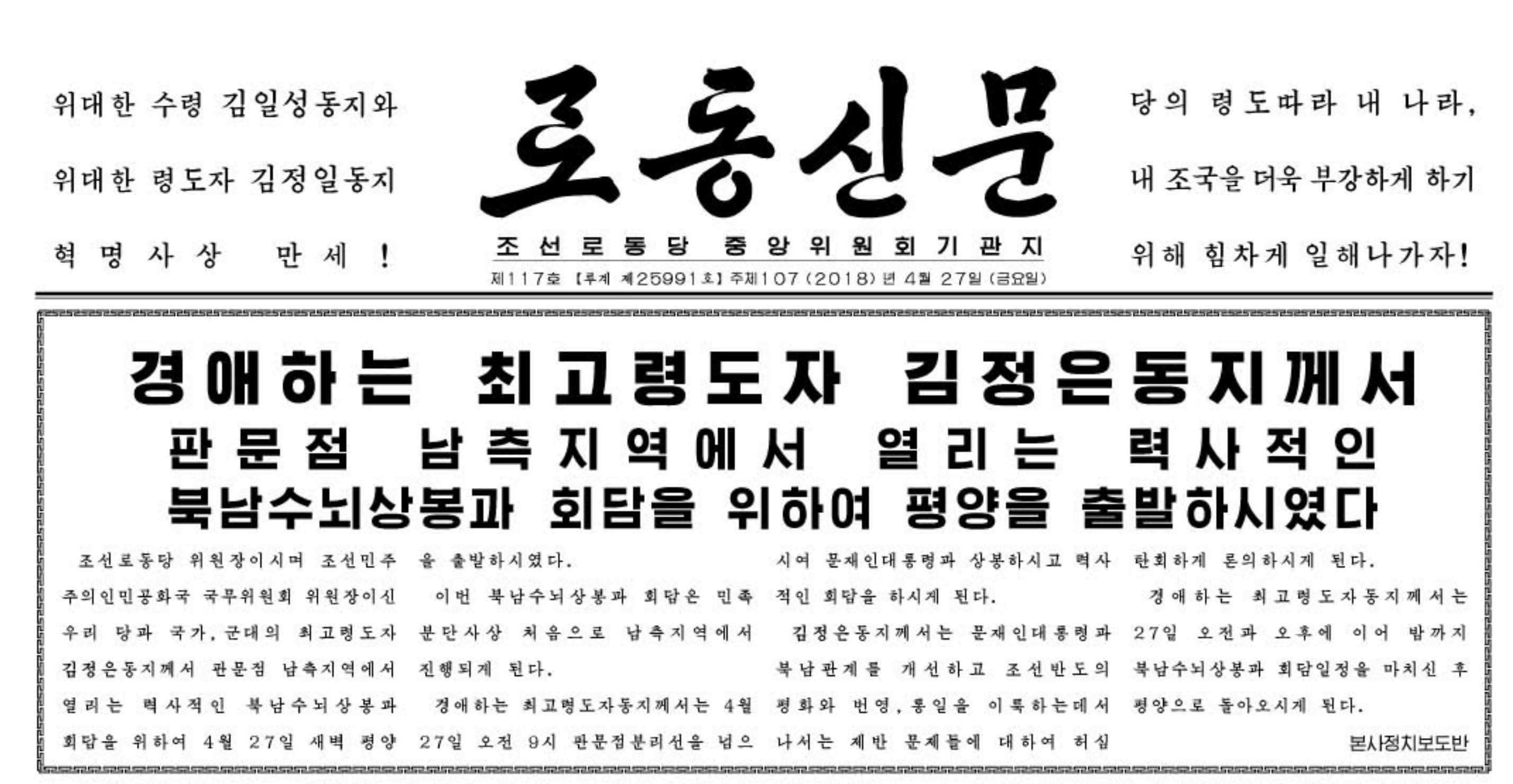 Kim Jong Un, chairman of the Workers’ Party of Korea and chairman of the State Affairs Commission of the Democratic People’s Republic of Korea, left Pyongyang early on Friday morning for the historical North-South summit meeting and talks to be held in the south side portion of Panmunjom.

Ordinary South Koreans are largely unable to see how North Korea is framing the event. North Korean state media and propaganda is censored in the South under a national security law dating to before the Korean War, and the websites of the official Korean Central News Agency and other outlets are blocked. 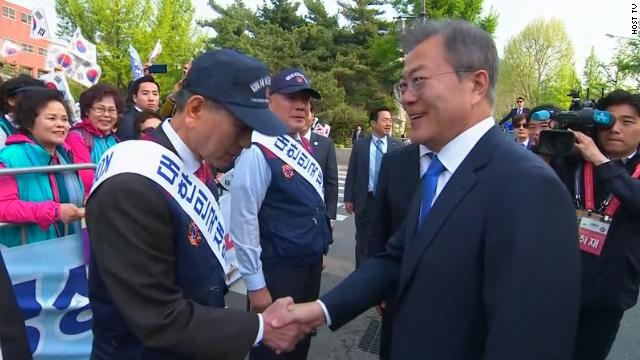 He was greeted by cheering supporters waving South Korean flags outside the Blue House, his official residence, where he shook hands with veterans of the Korean War. Before he left, Moon greeted a large crowd and shook hands with several well-wishers before climbing into a car.

It's about 30 or so miles as the crow flies.

The South Korean government has gone all out promoting the summit as the start of a new, peaceful era in inter-Korean relations across the capital of Seoul.

This is what it looks like in South Korea:

A poster in the Gwanghwanmum area of Seoul shows two hands shaking with a translucent Korean Peninsula on top of them and the words, "Peace made by the South and the North, together with the city of Seoul." 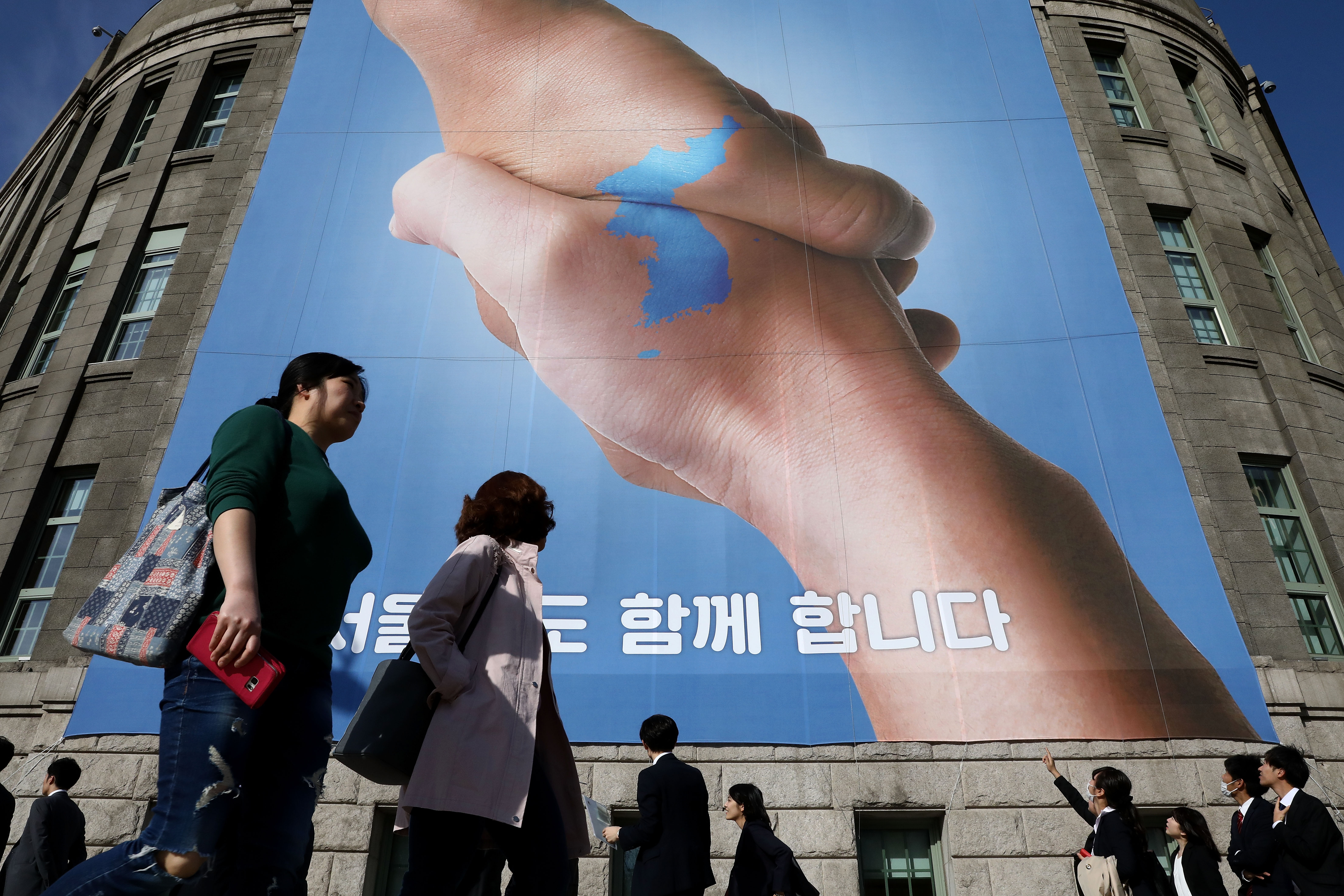 The lawn in front of city hall in Seoul was manicured in the shape of the Korean Peninsula. 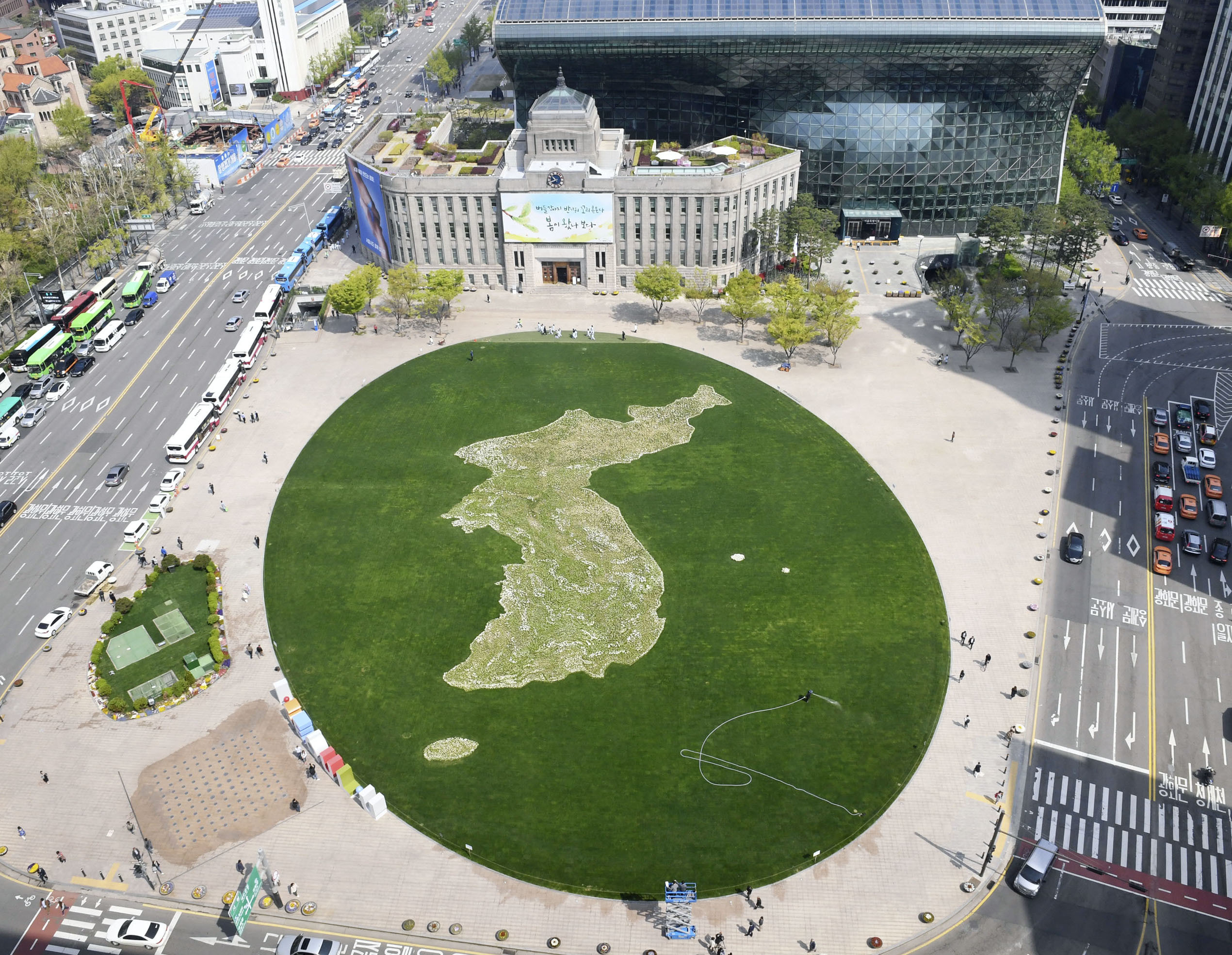 And the unification flags, the same display that the two Koreas marched under together during the opening ceremony of the Olympics, were lined up along the road leading up to the DMZ.