Our live coverage has ended. Scroll through the posts below to see what happened during the historic summit.

The leaders of North Korea and South Korea met today for the first time in over a decade. Here are the highlights from the summit:

North Korean leader Kim Jong Un and South Korea's President Moon Jae-in met at the line that separates the divided Koreas. Kim then stepped over the raised Military Demarcation Line, entering territory controlled by the South for the very first time. After posing for the cameras, Kim then grasped Moon's hand and they briefly crossed into the northern side:

The two leaders had meetings with officials, and then Kim and Moon took part in a symbolic tree-planting ceremony in the DMZ. The tree was from 1953, the year the Korean War armistice was signed.

Then, they signed the Panmunjom Declaration for Peace, Prosperity and Unification on the Korean Peninsula. The document commits the two countries to a nuclear-free peninsula and talks to bring a formal end to the Korean War.

The leaders ended the summit with a formal dinner — and a toast.

The United Nations Secretary General applauded the historic Korea summit and noted that many around the world are “moved by the powerful imagery," according to a statement from his spokesman.

The Secretary-General applauds today’s truly historic Summit between the leaders of the Democratic People’s Republic of Korea (DPRK) and the Republic of Korea. Many around the world were moved by the powerful imagery of the two leaders coming together to advance harmony and peace on the Korean Peninsula. The Secretary-General salutes the courage and leadership that resulted in the important commitments and agreed actions outlined in the Panmunjom Declaration for Peace, Prosperity and Unification of the Korean Peninsula. He counts on the parties to build on their first meeting and swiftly implement all agreed actions to further inter-Korean trust-building and reconciliation; sincere dialogue; and progress towards sustainable peace and verifiable denuclearization on the Korean Peninsula. He looks forward to these gains being consolidated and advanced at the Summit between the leaders of the United States and the DPRK expected to take place in the near future. The Secretary-General pledges his commitment and readiness to further assist in these important processes.

Leaders of the two Koreas have agreed to end the Korean War — 65 years after hostilities ceased — in a wide-ranging joint announcement struck Friday,

The Koreas went to war in 1950 when soldiers from the North Korean People's Army invaded the South.

The armed conflict ended three years later in 1953, with the signing of an armistice agreement, but no formal peace treaty was ever signed, and technically, the Peninsula remains at war.

Kim Jong Un left DMZ moments ago in a black a car — flanked by a group of running bodyguards.

The jogging bodyguards have traveled with Kim throughout the summit. Here's a look at the security detail in action: 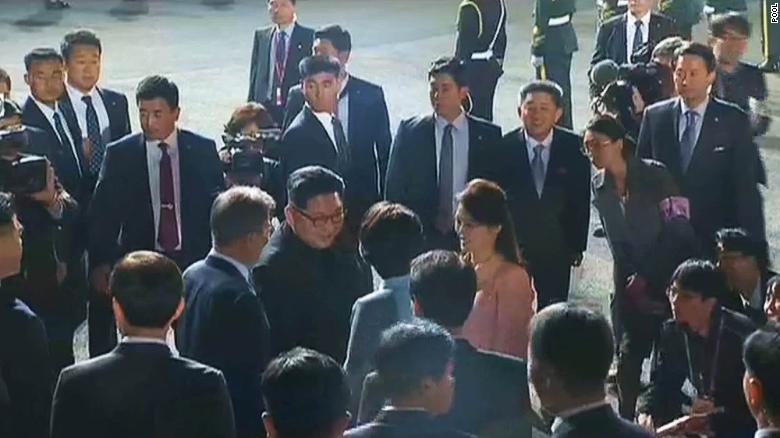 And that is that. Kim and Moon have left the demilitarized zone and the inter-Korean summit has officially come to a close.

Kim and his wife said their goodbyes to Moon and his wife before being driven in a car – flanked once again by Kim’s running bodyguards -- out of the Peace Village and presumably en route to Pyongyang. 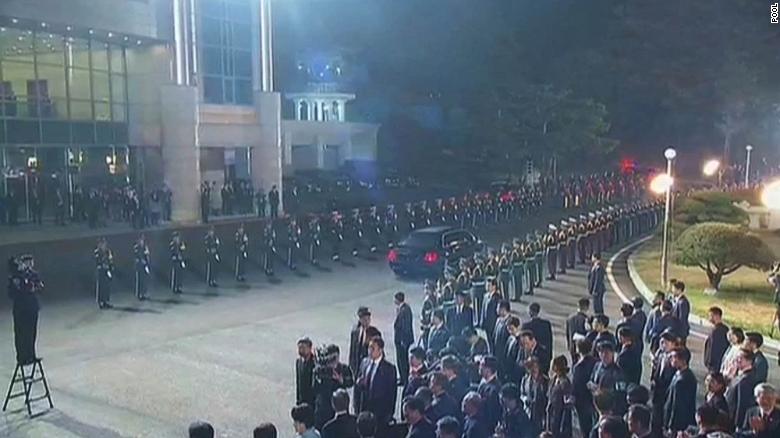 Kim and Moon leave behind a feeling of promise and positivity that hasn't been felt on the Korean Peninsula for years. Along with a promise to finally end the war which has hung like a cloud over this part of the world for 65 years, the agreement they signed will see increased communication and cooperation going forward.

There will be much to debrief in the coming days and weeks for the two leaders and their allies, and now the focus will fall on US President Donald Trump's planned meeting with Kim -- it's been mooted for the end of May or beginning of June.

“China has always supported the two sides to establish mutual trust and improve bilateral ties through dialogue and consultation. This is in the common interest of the two sides and the region, and meets the common expectation of the international community. We hope and believe that the North and South Korean sides will be able to implement the consensus reached by their leaders and continue to push for reconciliation and cooperation."“We hope all relevant parties keep the momentum of dialogue, work together to promote the denuclearization of the Korean Peninsula as well as the process of a political settlement on the peninsula issue.”

Friday's events in the demilitarized zone concluded with a suitably flashy performance. A Korean song called "One dream, One Korea" by South Korean singer Minah was performed by a pianist and accompanying orchestra while a huge projection was played onto the side of the Peace House.

It was an incredible spectacle and a breathtaking end to a truly epic day. Kim and Moon held hands while watching the performance, which was followed by an immense slide show projecting the day's events onto the side of the building.

Moon, Kim, and their wives watched highlights of today’s events and a video entitled ‘Korea past, present and future’.

In one of a flurry of tweets Friday morning, US President Donald Trump praised the help that his "good friend" Xi Jinping, the Chinese President, has offered in moving forward the nascent peace process on the Korean Peninsula.