Our live coverage has moved. You can follow the latest here.

While judges deliberate on whether Novak Djokovic will be allowed to stay in the country, the Australian Open has released its schedule for the first day of the tournament.

Top seed Djokovic is scheduled to take on fellow Serb Miomir Kecmanovic during the final match at Rod Laver Arena in Melbourne on Monday night.

But with judges still deciding whether to overturn the immigration minister's decision to revoke his visa, it's unclear whether Djokovic will be able to make that match.

The schedule was released Sunday afternoon local time, despite the unfinished court proceedings.

Judges are hoping to return a decision late Sunday, though they say the case may need to be relisted for hearing on Monday.

Chief Justice James Allsop has adjourned the court session so he and two other judges can consider the arguments made during Sunday's hearing.

Justice Allsop said he hoped to be able to return a decision Sunday although there was a possibility they could need to schedule another hearing Monday morning.

Novak Djokovic, the world's No. 1 tennis player, is seeking a court order to reinstate his visa so he can contest the Australian Open which kicks off Monday.

"Rightly or wrongly" tennis star Novak Djokovic is perceived as endorsing anti-vaccination views -- and his presence in Australia could influence people, said lawyer Stephen Lloyd, who is acting for the government.

Lloyd said it was "common sense and uncontroversial" to assume that people would listen to Djokovic's views, given what we know about the power of celebrity.

According to Lloyd, Immigration Minister Alex Hawke doesn't need to show evidence that Djokovic is influencing people's views to cancel his visa -- just that there's a risk that he might.

He said Hawke made the decision to cancel Djokovic's visa in accordance with the Australia's Migration Act that enables the minister to bar someone who "may" or "might" pose a risk to public health.

Australia's Immigration Minister Alex Hawke was "well aware" of how anti-vaccination groups could respond to the decision to cancel Novak Djokovic's visa, according to lawyer Stephen Lloyd, who is representing Hawke.

Before the break, Djokovic's lawyers claimed that the minister had failed to consider the consequences of canceling Novak Djokovic's visa -- and said it was possible that ejecting Djokovic will serve to galvanize anti-vaxxers against the government.

But Lloyd responded to that ground of appeal, saying:

He then went on to discuss the other grounds of Djokovic's case against the government.

A Federal Court hearing to decide if Novak Djokovic's visa should be reinstated for a second time has resumed after a one-hour break.

Serbian tennis star Novak Djokovic is fighting against the Australian government's decision to cancel his visa.

Before the Federal Court broke for lunch, lawyers for both sides were given the opportunity to state their arguments as to why Djokovic's visa should -- and should not -- be canceled.

If you're just catching up, here's what's happening.

Why are Djokovic's lawyers in court? The top-ranked men's tennis player is trying to overturn a decision Friday to cancel his visa. He wants to compete in the Australian Open, which kicks off Monday -- and hopefully win a record-breaking 21st grand slam title.

What are his lawyers arguing? Djokovic's lawyer Nick Wood laid out three grounds why Immigration Minister Alex Hawke had made a jurisdictional error.

Wood focused on the first ground, arguing that the minister failed to consider the consequences of canceling Djokovic's visa. He said it was possible that ejecting Djokovic will serve to galvanize anti-vaxxers against the government -- exactly what the government says it's trying to avoid.

The other two grounds are that it was not open to the minister to be satisfied the presence of Djokovic “is or may be” a relevant risk, and that the decision to bar him on his "stance on vaccination" was unreasonable or irrational.

What about the government? But Stephen Lloyd, acting for Hawke, said Djokovic's visa cancelation wasn't only about his potential to ignite protests among anti-vaxxers.

He said Djokovic had shown little regard for Covid-19 restrictions by ignoring a positive Covid-19 test and failing to wear a mask during a photoshoot. Lloyd said that could threaten public health by encouraging others to ignore health directions.

Where is Djokovic? Early Sunday morning, Djokovic was driven from the Park Hotel in Melbourne, where he is being held in immigration detention, to his lawyers' office to watch the proceedings.

For a short time, two Djokovic fans stood outside the office building, showing their support for the star and watching the hearing on a mobile phone.

What happens next? A decision is expected to be made today about whether the world's No. 1 tennis play will contest the Australian Open -- or if the visa cancelation stands and he needs to leave the country. 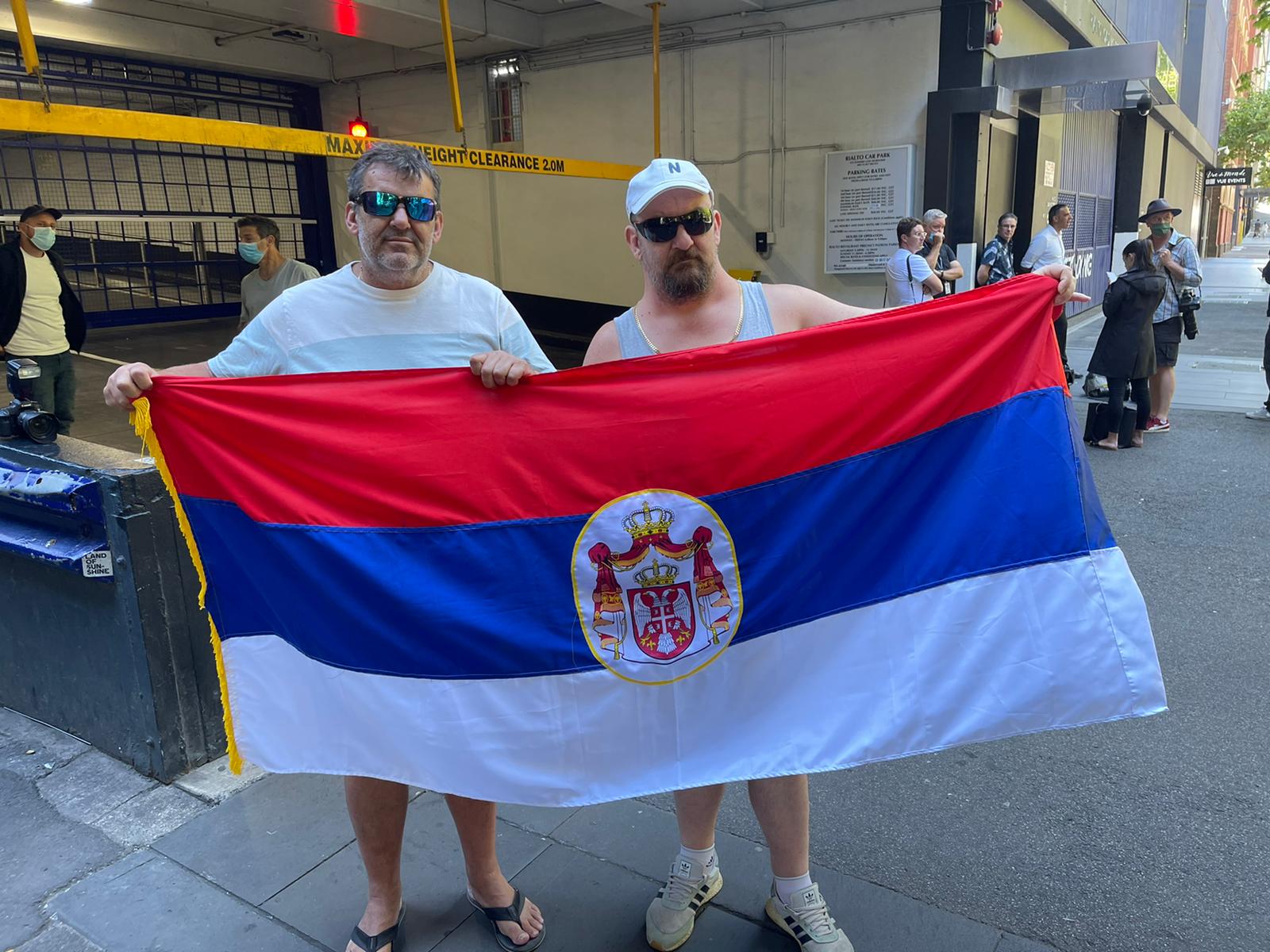 Before the break, lawyer Stephen Lloyd, acting for Hawke, estimated it would take him another hour to finish arguing the government's case.

Three judges are hearing Djokovic's appeal against Hawke's decision to cancel the tennis star's visa. They hope to make a decision Sunday before the Australian Open tennis tournament kicks off Monday.

Djokovic's lawyers have already laid out their arguments, which center on the government's failure to consider the consequences of the cancelation. They argue that Djokovic's removal from the country could galvanize anti-vax campaigners, which is exactly what the government's decision had intended to avoid.

A lawyer representing Australia's immigration minister told the court that Novak Djokovic's anti-vaccine views go beyond his failure to be vaccinated.

Stephen Lloyd pointed to the Serbian tennis player's admission that he hadn't isolated after testing positive on December 16.

In a social media post on Wednesday, Djokovic admitted he had attended a media interview and photoshoot when he knew he was ill. During the interview, the player wore a face mask but took it off for photos.

Lloyd said Djokovic's attendance at the interview and his decision to remove his mask showed that he didn't respect Covid-19 control measures.

The Minister took the view that his presence in Australia would encourage people to emulate his apparent disregard for those kinds of safety measures," Lloyd said.

Furthermore, Lloyd said Djovokic's status as a sports star means his actions are more likely to influence others.

People use high-level athletes to promote ideas and causes all the time. The applicant himself no doubt has many advertising arrangements with different clients.
I'm not saying this is advertising, but his connection to a cause, whether he wanted or not, is still present, and his presence in Australia was seen to pose an overwhelming risk. And that's what has motivated the minister, as he says in these reasons."

Novak Djokovic had the option of getting vaccinated before he was infected with Covid-19 in December, a lawyer representing Australia's Immigration Minister told the court Sunday.

After arriving in Australia on January 5, the Serbian star told Australian Border Force agents he had tested positive for the virus on December 16 -- and said that he wasn't vaccinated against Covid-19.

Stephen Lloyd, a lawyer for Immigration Minister Alex Hawke, told the court vaccines were available before Djokovic tested positive for Covid-19 in December -- and no reason was given why Djokovic couldn't have been vaccinated.

He said that suggested Djokovic wasn't inclined to be vaccinated, demonstrating his anti-vaccine stance.

Earlier in the hearing, Djokovic's lawyers pointed to an article published on January 6 which stated Djokovic expressed opposition to vaccinations in April 2020.

Djokovic's lawyers argued the comments were made before vaccines were even available, and the article also quotes the players as saying he would keep an "open mind".

But Lloyd referred to that same article, saying it doesn't discount the government's argument: "We say if anything it strengthens it."

He added the article showed Djokovic was opposed to Covid-19 vaccines even before they were available.