Our live coverage of the Djokovic saga has ended. Read the latest here.

Serbian President Aleksandar Vučić said on Sunday that Australian authorities “think they humiliated Djokovic,” but “have humiliated themselves.”

Addressing journalists, Vučić said he had spoken to Novak Djokovic and offered him encouragement, after judges in Australia on Sunday dismissed the player's challenge to overturn the cancellation of his visa for a second time.

"I spoke with Djokovic shortly after the decision was handed down. I encouraged him, letting him know that we are all awaiting his return to Serbia, his home country, where he is always welcome. Those people who were trying to show [the world] that they are so principled, in fact, demonstrated the exact opposite," Vučić said.

Vučić went on to criticize how Djokovic was treated by the Australian media and authorities, calling it a "witch hunt" against the tennis star and Serbia.

"You are harassing the best tennis player in the world for 10, 11 days, and on the 11th day you hand down the decision that you had always intended to hand down since day one," Vučić said.

"If you had said that an unvaccinated person cannot enter Australia, then Djokovic either would not have come or would have gotten vaccinated. But you left the door open for medical exemption, and so he received one and came with this status. He did all that was asked of him and then began the harassment, followed by an unprecedented media lynching," he added.

"A literal witch hunt was whipped up against one person and one country because they wanted to show Novak Djokovic how world order works, and how they can treat anyone they choose like this," the president said.

Vučić also accused the prosecutor of "lying," saying he had understated the proportion of Serbia's population that is vaccinated against Covid-19. According to official data, 58% of the adult population in Serbia is vaccinated.

Vučić added that Serbia would give Australian athletes an "incomparably better" welcome in March, when the World Athletics Indoor Championships takes place in Belgrade.

"They will come to the athletics championship and we will show the Australian government how much better we are," he said.

Vučić concluded, "They think they’ve humiliated Djokovic, with this 10-day harassment. They’ve only humiliated themselves, and Djokovic can return to his country with his head held high."

"I welcome today’s unanimous decision by the Full Federal Court of Australia, upholding my decision to exercise my power under the Migration Act to cancel Mr Novak Djokovic’s visa in the public interest," Hawke tweeted.

"I can confirm that Mr Djokovic has now departed Australia."

An Emirates plane carrying Djokovic has taken off from Melbourne Airport, bound for Dubai.

Novak Djokovic has left Australia on an Emirates flight to Dubai, hours after he lost a legal challenge against a decision to revoke his visa.

The player's ultimate destination is not yet known.

The departure brings to an end a days-long drama revolving around whether or not the Serb, who is not vaccinated against Covid-19, could be admitted to the country under a medical exemption.

The world No. 1 had been scheduled to play Monday night in the Australian Open, where he had hoped to win a record-breaking 21st men's grand slam title. 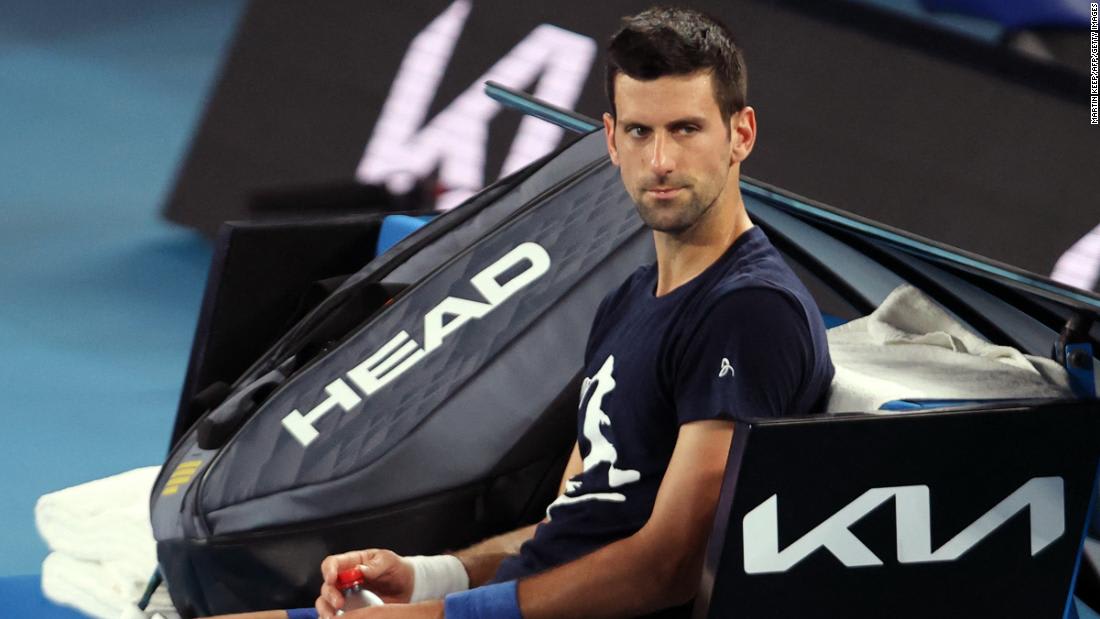 Djokovic out of the Australian Open after court rejects visa challenge

World men’s tennis No.1 Novak Djokovic will depart Australia at 10:30 p.m. local time (6:30 a.m. ET) Sunday on an Emirates flight, a source with knowledge of the case confirms.

Goran Zabic, who was among a group of Djokovic supporters who gathered in Melbourne on Sunday, said he was "absolutely devastated, as well as shocked" by the outcome.

He had believed he would get to support Djokovic in the Australian Open, Zabic said. Asked if he had a message for the Serbian tennis star, he said: “Look, not to get political but I'd just like to say, Novak you've won the fight. But looks like you lost the political war.”

He described Djokovic as being a "national hero" to the Serbian people, adding that he was an "absolute legend, as a human and as a tennis player. Extremely important.”

The ATP has described the decision to uphold the cancellation of Novak Djokovic's visa as "the end of a deeply regrettable series of events" and said his absence from the Australian Open is "a loss for the game."

"Ultimately, decisions of legal authorities regarding matters of public health must be respected. More time is required to take stock of the facts and to take the learnings from this situation," the ATP said in a statement.

"Irrespective of how this point has been reached, Novak is one of our sport’s greatest champions and his absence from the Australian Open is a loss for the game.

"We know how turbulent the recent days have been for Novak and how much he wanted to defend his title in Melbourne. We wish him well and look forward to seeing him back on court soon."

The ATP continues to strongly recommend vaccination to all players, it said.

"Novak would never have gone to Australia if he had not been given an exemption to enter the country by the government (which he did receive; hence Judge Kelly’s initial ruling)," Pospisil tweeted Sunday.

"He would have skipped the Australian Open and been home with his family and no one would be talking about this mess.

"There was a political agenda at play here with the elections coming up which couldn’t be more obvious. This is not his fault. He did not force his way into the country and did not 'make his own rules'; he was ready to stay home."

Tennis Australia, the national governing body for tennis and organizer of the Australian Open tournament, has said it "respects the decision of the Federal Court" regarding Novak Djokovic's visa.

"As per Grand Slam rules the No.1 position in the draw has been filled by a Lucky Loser," it said in a statement.

"We look forward to a competitive and exciting Australian Open 2022 and wish all players the best of luck."

The organizers of the Australian Open have now replaced top seed Novak Djokovic following his failed attempt to halt his deportation from Australia.

The new order of play inserts Salvatore Caruso in place of Djokovic. The Italian will face Serbian player Miomir Kecmanović.