China's planned military exercises around Taiwan are tantamount to a "maritime and aerial blockade" and have "violated Taiwan’s territorial waters and its contiguous zone," the island's Defense Ministry said in a news briefing on Wednesday.

“We will take countermeasures against any acts that violate our sovereignty,” Sun said, adding that Taiwan’s military does not seek a war but will always be prepared for it.

The military will strengthen alertness in a “rational way that doesn't heighten conflict," he added.

Some context: On Tuesday, China's military said it would start exercises around Taiwan in response to Pelosi's visit to the self-governing island and launch a series of "targeted military operations to counteract the situation," according to statements released by China's Eastern Theater Command and Ministry of Defense. 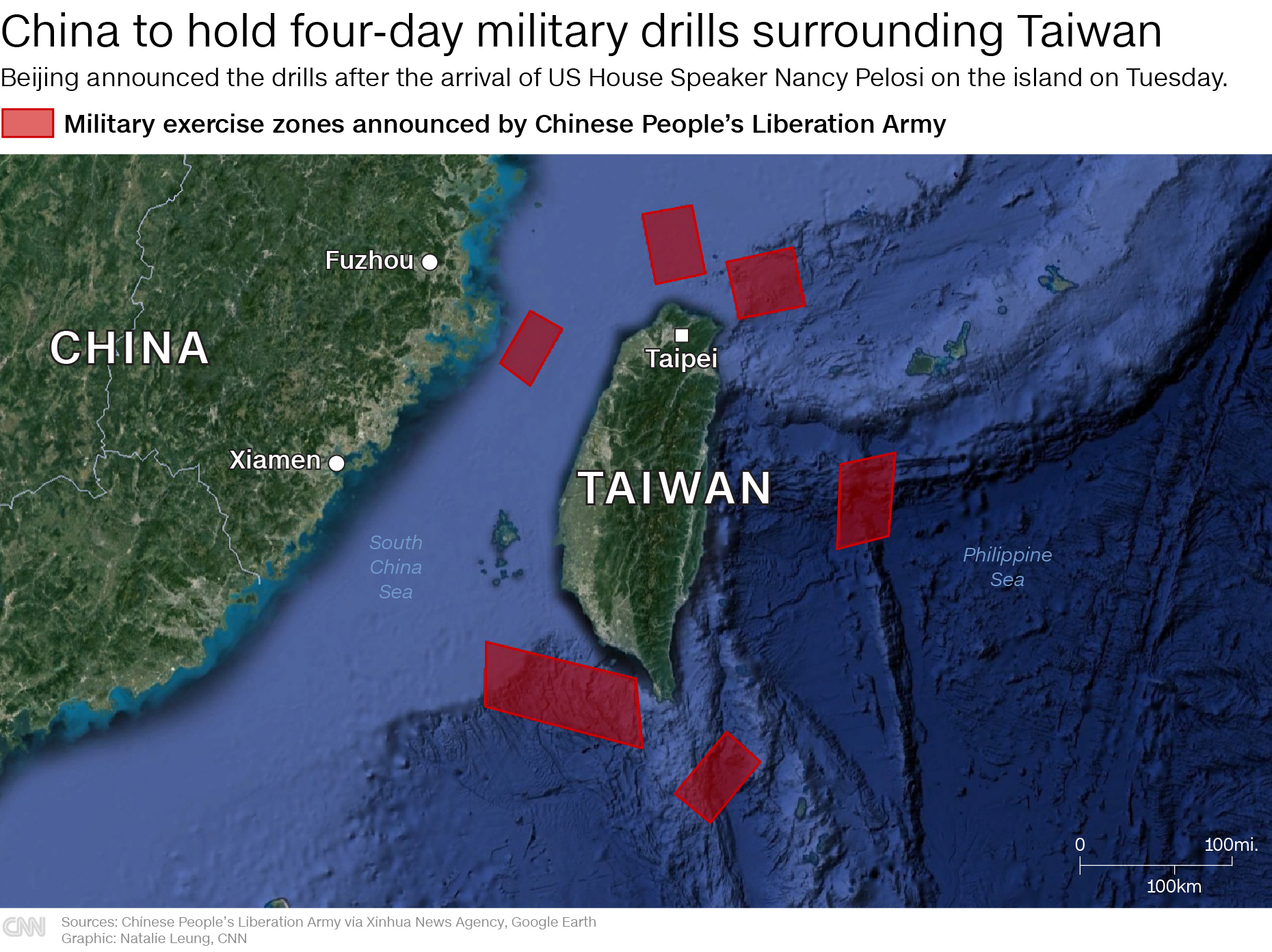 Japan has expressed concern to China over its planned live-fire drills in the Taiwan Strait, the country’s chief cabinet secretary Hirokazu Matsuno said on Wednesday.

Matsuno told reporters during a news conference that Tokyo is once again calling for "the peaceful resolution of the cross-straits issue."

He added that Japan's Exclusive Economic Zone (EEZ) is included in the area of sea that China announced as the target location for its military exercises.

Some context: On Tuesday, China’s military announced that it would start exercises around Taiwan in response to US House Speaker Nancy Pelosi’s visit to the island.

It will launch a series of “targeted military operations to counteract the situation,” according to statements released by its Eastern Theater Command and Ministry of Defense.

US House Speaker Nancy Pelosi on Wednesday said China will not "stand in the way" of people visiting Taiwan.

"I just hope that it's really clear that while China has stood in the way of Taiwan participating and going to certain meetings, that they understand that they will not stand in the way of people coming to Taiwan," Pelosi said at a joint news conference in Taipei with Taiwan's President Tsai Ing-wen.

Pelosi said the US congressional delegation's visit to the self-ruled democratic island was a "show of friendship and support," but also a source of learning and collaboration, after referencing previous trips made by US legislators.

Pelosi reiterated the US' support for Taiwan, again saying they had come to send an "unequivocal message — America stands with Taiwan."

"We have to show the world, and that is one of the purposes of our trip, to show the world the success of the people of Taiwan," Pelosi said, pointing to the courage of the Taiwanese people to uphold democracy.

"We want Taiwan to always have freedom with security, and we're not backing away from that," Pelosi said.

US House Speaker Nancy Pelosi met with Taiwanese leaders and lawmakers on Wednesday, after arriving in the self-governing island late Tuesday night. The high-profile visit, which China has vowed to respond to, is part of a larger Asia tour by a US congressional delegation.

China is set to stage military drills around Taiwan from Thursday to Sunday to protest Nancy Pelosi's visit to the island.

The Chinese Defense Ministry released a map of six zones around the island where it plans to conduct air and sea exercises as well as long-range live-fire exercises, as part of what a spokesman described as a "blockade."

Ships and aircraft have been warned to stay out of the areas during the drills.

The ADIZ: The exercise areas announced by Beijing extend well into Taiwan's air defense identification zone — a buffer of airspace commonly referred to as an ADIZ — and in some cases encroach on the island's territorial airspace, an area recognized by international law as extending 12 nautical miles (22.2 kilometers) from shore. 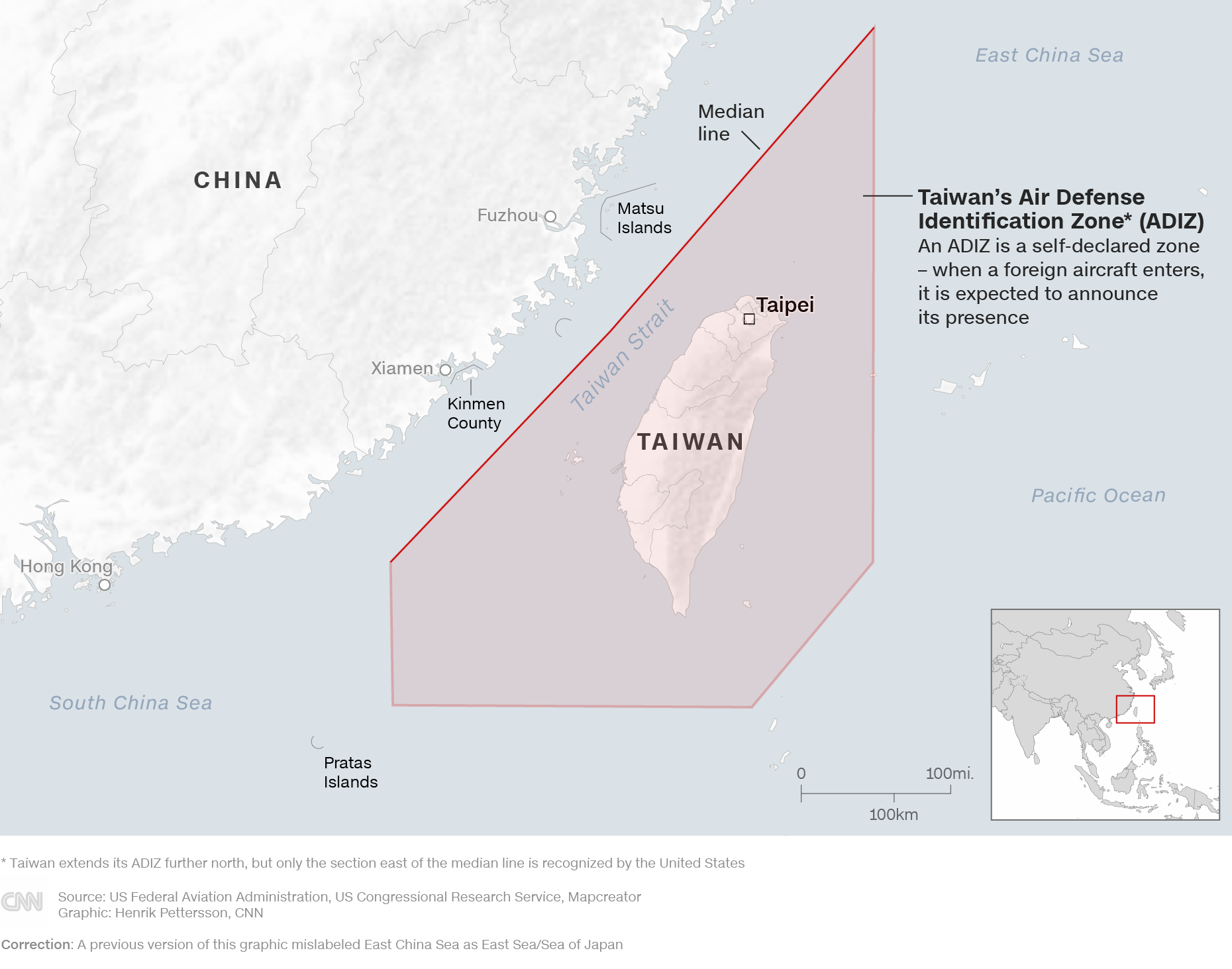 Does Taiwan have its own airspace? Taiwan's disputed status makes this question hard to answer definitively.

While Taiwan is a self-governing democracy, China insists it has sovereignty over the island and is fiercely opposed to any suggestion that it could be considered an independent country — meaning in Beijing's eyes, Taiwan's airspace is essentially China's airspace.

However, even if "China doesn't recognize Taiwan, they've respected Taiwan's airspace," said Drew Thompson, visiting senior research fellow at the Lee Kuan Yew School of Public Policy at the National University of Singapore and a former US Defense Department official.

Most countries in the world do not recognize Taiwan as an independent country — holding diplomatic relations with Beijing rather than Taipei.

Pakistan reaffirmed its commitment to the "One China" policy on Tuesday, adding that it “firmly supports China’s sovereignty and territorial integrity.”

In a statement, Pakistan's Ministry of Foreign Affairs said it is "deeply concerned over the evolving situation in the Taiwan Strait, which has serious implications for regional peace and stability."

The statement was released as US House Speaker Nancy Pelosi landed with a congressional delegation in Taipei, marking a significant show of support for Taiwan despite China’s threats of retaliation over the visit.

Without mentioning Pelosi or the United States, the Pakistani ministry said the “world cannot afford another crisis that has negative consequences for global peace, security and economy.” It said the world is already facing a “critical security situation” due to the war in Ukraine, which has destabilized food and energy security.

It also reiterated Islamabad's calls for bilateral ties to be based on “mutual respect, non-interference in internal affairs, and peaceful resolution of issues by upholding of principles of UN charter, international law and bilateral agreements.”

The Chinese Communist Party founded the People's Republic of China in 1949 — kicking off years of military conflicts across the Taiwan Strait in the 1950s, with Beijing shelling several outlying islands controlled by Taipei on two separate occasions.

The last major crisis took place in 1995-1996, after Taiwan's President at the time, Lee Teng-hui, visited the United States.

Lee, who had earned a doctoral degree from Cornell University in New York state, returned to his alma mater in 1995 to deliver a speech at a reunion event, which was broadcast throughout Asia and across the world, according to the university.

Enraged by the visit, and at the US for granting Lee a visa, China fired missiles into waters around Taiwan. The crisis ended only after the US sent two aircraft carrier battle groups to the area in a forceful show of support for Taipei.

Experts say Lee was the first Taiwan leader to float the idea of the island being a separate, distinct entity from the Communist-ruled mainland — making him a particularly sensitive figure for Beijing, even decades later.

Taiwan's President Tsai Ing-wen thanked US House Speaker Nancy Pelosi for visiting the self-ruled island during their meeting on Wednesday, and said Taipei would do “whatever it takes” to strengthen its self-defense capability.

"Facing deliberately heightened military threats, Taiwan will not back down. We will firmly uphold our nation's sovereignty and continue to hold the line of defense for democracy," Tsai said at the presidential office in Taipei. "At the same time, we wish to cooperate and work in unity with all democracies around the world to jointly safeguard democratic values."

Tsai said she is committed to “maintaining peace and stability” in the Taiwan Strait, and vowed to make Taiwan a “key stabilizing force” for regional security and the development of global trade.

She thanked Pelosi for “expressing the US' consistent policy supporting Taiwan’s self defense” and hailed her as one of the democratic island's "most devoted friends."

“Taiwan is a reliable and trustworthy cooperative partner of the United States. We will continue to work with the US Congress, as well as the administration to strengthen cooperation in areas such as Indo-Pacific security, economic development, talent cultivation and supply chains, so as to further elevate Taiwan-US relations,” Tsai added.

After delivering their remarks, US House Speaker Nancy Pelosi and Taiwanese President Tsai Ing-wen gathered with members of their respective delegations for a group photo in the presidential office.

They stood beneath Taiwan's official flag and a portrait of Sun Yat-sen, often called the founding father of modern China. Large vases of pink orchid flowers were placed on either side.

Pelosi was dressed in a light pantsuit, with a blue top underneath and matching blue shoes and face mask.