Our live coverage of the Seoul Halloween tragedy has moved here.

Four other South Korean military personnel were injured in the incident and are being treated in hospital, the official added.

The official did not provide any further information.

It has also been confirmed that the dead includes one Norwegian and one Sri Lankan national, as well as two Japanese victims.

Four victims were teenagers, 95 people were in their 20s, 32 people in their 30s, nine in their 40s and 13 have yet to be identified, the ministry said.

Seoul Metropolitan Police said they have confirmed the identities of nearly all those killed in an apparent crowd surge at Seoul’s popular nightclub district Itaewon on Saturday.

The identities of 150 people killed have been confirmed, police told CNN on Sunday. The death toll from the disaster stands at 153.

The Seoul Metropolitan Government had said they had received 4,024 missing persons reports as of 5 p.m. local time (4 a.m. ET), though some of these reports could relate to the same people.

Police said there is no active search for those reported missing as they believe no one went missing from the scene. They said thousands of missing person reports have been used to help identify those killed in the incident.

Four Iranians among the dead: Four Iranians are among those killed in an apparent crowd surge at the popular Seoul nightclub district Itaewon Saturday night, Iran's Embassy in Seoul confirmed, according to the semiofficial Iran Student News Agency (ISNA).

Two of the deceased have been identified in Seoul hospitals and two are located in hospitals outside of Seoul, the report said.

An Australian was among those killed in the crush at Seoul's popular nightclub district Itaewon on Saturday night, according to the government in Canberra.

“Consular officers from the Department of Foreign Affairs and Trade (DFAT) are providing consular assistance to the individual’s family in Australia,” a DFAT statement read.

The Australian Embassy in Seoul is “assisting a number of other Australians who were present at the event,” according to a DFAT spokesperson.

“The Australian Government sends its condolences to the family and others affected by this tragic incident. We ask for the family’s privacy to be respected during this difficult time. Owing to our privacy obligations, we are unable to provide further comment,” the statement read.

Death toll rises: The death toll from the disaster in Seoul's Itaewon nightclub district has meanwhile risen by two to 153, according to the country’s Ministry of Interior and Safety.

Among the 153 dead were 20 foreign nationals, according to the ministry.

Four Chinese nationals were among the 151 people killed during Halloween festivities in Seoul, with two others suffering minor injuries, Chinese state news agency Xinhua has reported.

Nineteen foreign nationals in total are among the dead, including people from Iran, Norway and Uzbekistan.

It added that it would provide help to victims’ families and has offered its condolences.

On Saturday night, tens of thousands of people flooded into the streets of the Itaewon neighborhood in Seoul to celebrate Halloween.

But as the night went on, panic erupted as the crowds swelled. What exactly caused the crush still isn't clear, but witnesses say partygoers had been packed tightly in the district’s narrow streets and it was difficult to move around.

As of Sunday afternoon, 151 people have been killed -- making it one of the country's worst disasters.

Here’s a recap of what else we know so far. 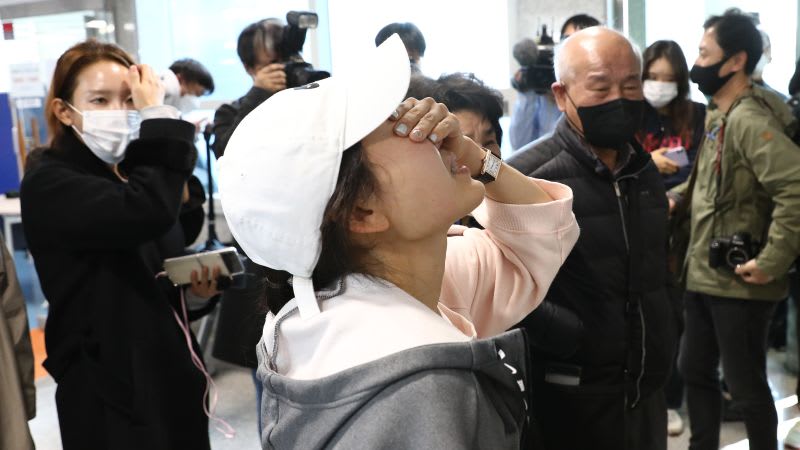 What we know about the deadly Halloween disaster in Seoul | CNN

An English teacher in Seoul who was passing through Itaewon on Saturday night recounted what she saw to CNN.

"There were rows and rows of people with tarps covering them in the street," said Emily Farmer, 27.

Farmer, who was with two friends, said she did not see any crowd control measures in place in the area.

The tragedy has killed at least 151 people and left dozens more hurt. Nineteen foreign nationals, from Iran, Norway, China and Uzbekistan, are also among the dead.

Farmer and her friends were "overwhelmed" by the crowds on the street and decided to enter a bar.

Shortly after, rumors started spreading that somebody had died and patrons were not allowed to leave. Farmer said she received an emergency message from the government alerting them to "a dangerous situation in the area."

She was allowed to leave the bar at around midnight and she learned of the tragedy that had taken place just outside.

"It was horrible," she said. "Not everyone died instantly."

"They were still pulling people (out) because it was so crowded," she added.

There were also people still partying on the streets, essentially oblivious to what was happening."

Groups of people were crying, she added. Many victims were receiving CPR and had their costumes taken off to allow medics at the scene to resuscitate them.

She still hasn't heard back from two acquaintances in the area who she messaged last night. "I'm still in shock. It was obviously very traumatic," she added.

The human crush at Itaewon was “not a problem that could have been solved in advance,” South Korea’s Minister of the Interior and Safety Lee Sang-min said on Sunday.

“We understand that it was not a problem that could have been solved by deploying police or firefighters in advance,” Lee said.

He added that there had been “various disturbances and demonstrations” in other parts of Seoul on Saturday.

“It was expected that many citizens would gather so a considerable number of police and security forces were deployed to Gwanhwanmun (another area of Seoul),” he said.

However, in Itaewon, the crowd had not been unusually large, he said, so only a "normal" level of security forces had been deployed there.

Speaking before the minister’s comments, Juliette Kayyem, a disaster management expert and national security analyst for CNN, had said it was hard to pinpoint what might have triggered the crush, but that authorities would have “anticipated high numbers” in the area.

“There is a responsibility on the part of the authorities to be monitoring crowd volume in real time, so they can sense the need to get people out,” Kayyem said.