Tomohiko Taniguchi, a special adviser to former Japanese Prime Minister Shinzo Abe, said Abe was "one of the most transformative leaders" of Japan.

"I think it's going to be an equivalent of JFK's assassination day. ... It's been a day of sadness, grief, disbelief, and for me, tremendous anger. People are finding it very much hard to digest the reality. I think it's very much an isolated event conducted by very much an isolated person. Nonetheless, that isolated incident killed one of the most transformative leaders of the Japanese history," he said.

He recalled Abe as a kind man and someone who wanted to usher Japan forward.

"He and Mrs. Abe did not have their own child, and he wanted to bring Japan to the younger generations as a country that is prosperous and future-oriented," he said.

"Once you are befriended with him, you get a lifelong friend," he added.

Taniguchi was an adviser to Abe from 2013-2014 and wrote foreign policy speeches for the former leader.

"I would very much like to see his legacy lasting, because there are very few options available for Japan. It's a maritime nation, and it's sitting on the periphery of a huge land mass which is being dominated by three nuclear power nations — Russia, North Korea, China — none of which is democratic. So Japan badly needs alliance partners like the United States, which Shinzo Abe tried very much hard to do," he added.

The shooting of former Prime Minister Shinzo Abe has shocked Japan, which has one of the lowest rates of gun crime in the world due to its extremely strict gun ownership laws.

In 2018, Japan, a country of 125 million people, only reported nine deaths from firearms — compared with 39,740 that year in the United States.

Under Japan's firearms laws, the only guns permitted for sale are shotguns and air rifles — handguns are outlawed. But getting them is a long and complicated process that requires strenuous effort — and lots of patience.

To buy a gun in Japan, potential buyers must:

After obtaining a gun, the owner must register their weapon with police and provide details of where their gun and ammunition is stored, in separate, locked compartments. The gun must be inspected by the police once a year, and gun owners must retake the class and sit an exam every three years to renew their license.

The restrictions have kept the number of private gun owners in Japan extremely low. 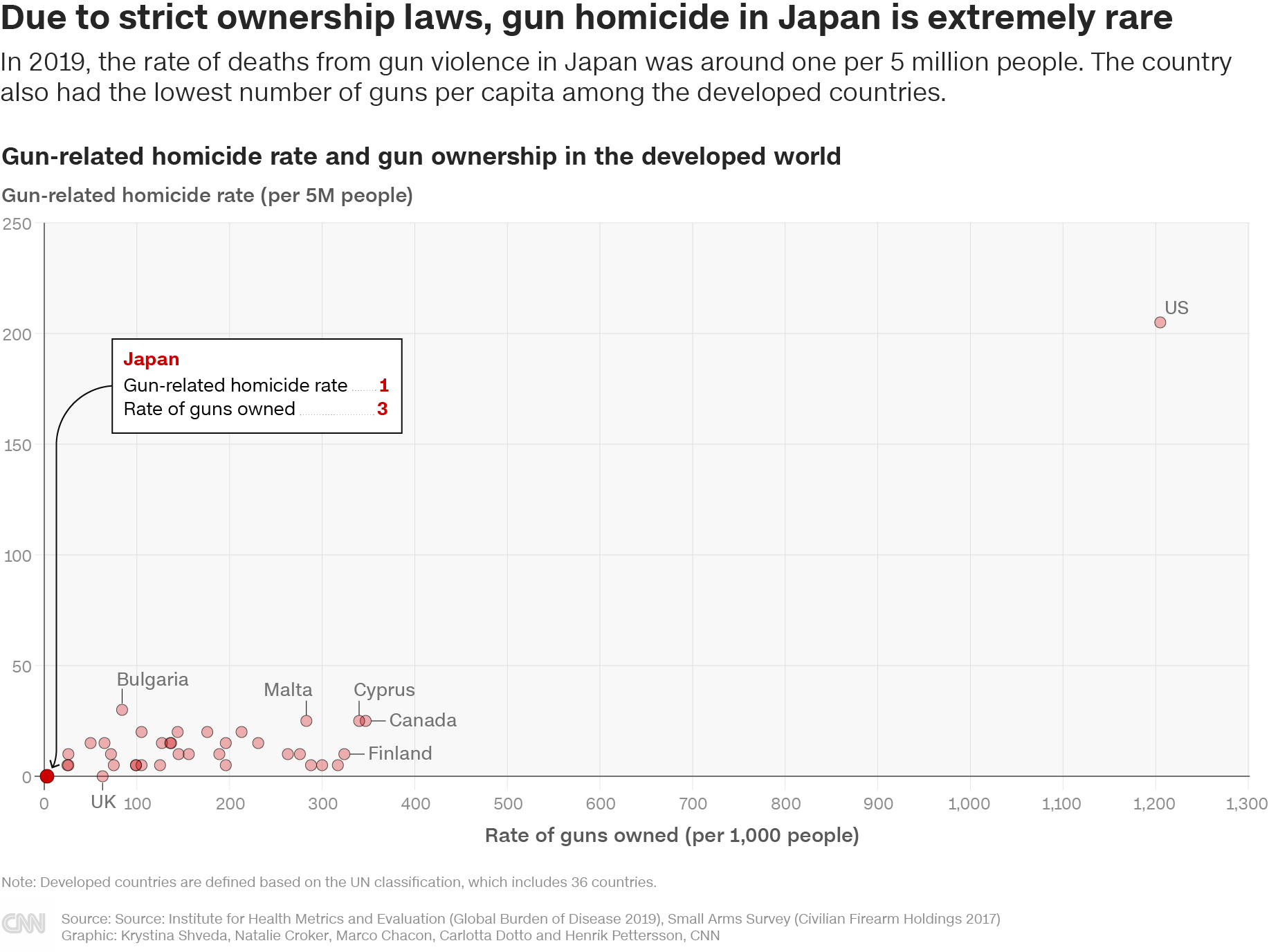 The suspect in the assassination of Shinzo Abe admitted to shooting the former prime minister, police said at a news conference Friday.

According to Nara-nishi police, Yamagami Tetsuya, a 41-year-old unemployed man, said he holds hatred toward a certain group, which he thought Abe was linked to.

US President Joe Biden said he was “stunned, outraged, and deeply saddened" by the death of former Japanese Prime Minister Shinzo Abe on Friday.

“Above all, [Abe] cared deeply about the Japanese people and dedicated his life to their service. Even at the moment he was attacked, he was engaged in the work of democracy,” Biden wrote in a statement. “While there are many details that we do not yet know, we know that violent attacks are never acceptable and that gun violence always leaves a deep scar on the communities that are affected by it. The United States stands with Japan in this moment of grief. I send my deepest condolences to his family.”

Abe maintained a close relationship with the United States during his time as prime minister, traveling with then-President Barack Obama to Pearl Harbor in 2016 and, later that year, becoming the first world leader to meet with then-president elect Donald Trump in New York, just two weeks after his election. As vice president, Biden met with Abe both in Tokyo and Washington.

Biden told reporters Friday that he’s reached out to Japanese Prime Minister Fumio Kishida following the assassination of the former prime minister, adding that he planned to stop by the Japanese embassy to sign a condolence book later on in the day.

He said that right now, he does not believe Abe's death will “have any profound destabilizing impact on Japanese security or Japanese solidarity," adding that Japan is a "very, very stable ally."

The President noted, “this is the first use of a weapon to murder someone in Japan,” to date this year, while the US has had "between 3 and 4,000 cases."

He said as investigations continue, the FBI will give the President more details.

The shooting of former Japanese Prime Minister Shinzo Abe is being investigated as a murder case, Nara-nishi police said Friday.

According to police, shooting suspect Yamagami Tetsuya, a 41-year-old unemployed man, said he holds hatred towards a certain group, which he thought Abe was linked to.

Ninety investigators are dedicated to the case, police said.

"Abenomics was, in very simple terms, a throw-it-all, buy-it-all strategy to try and stimulate growth. So, put massive spending into the economy, buy up government bonds, also implement economic reforms," CNN's Anna Stewart explained. "It was a way of trying to get mass employment, make people wealthier so they could spend more money, and just try and get the economy ticking."

"During his premiership, you saw the Bank of Japan push interest rates into negative territory," she said, adding that such a move was extremely unconventional at the time combined with "huge quantitative easing."

Since then, such a move has become much more conventional, particularly in recent years since the pandemic with all sorts of central banks around the world — the US Federal reserve, the ECB, the Bank of England — all doing similar moves, she added.

Abenomics was successful as well — at least for the first few years, according to experts, Stewart noted. "Critics would say that not all three arrows were ever fully achieved, and as a result of that, the success was unfortunately, limited."

"The problem for Japan was how to end what was very loose monetary policy, and also some of the structural issues, particularly with an aging workforce," Stewart added.

However, the policy also led to record-high government debt and failed to make a lasting dent in decades of deflation, CNN's Will Ripley reported.

Police in Nara, Japan, will hold a news conference on the assassination of former Prime Minister Shinzo Abe.

Abe died on Friday after being shot while giving a campaign speech on a street in central Japan, according to public broadcaster NHK.

Abe died from excessive bleeding and was pronounced dead at 5:03 p.m. local time, doctors at the Nara Medical University hospital said during a news conference on Friday. The doctors said the bullet that killed the former Japanese leader was "deep enough to reach his heart" and a team of 20 medical professionals were unable to stop the bleeding.

Abe went into cardiopulmonary arrest at the site of the shooting and was rushed to hospital in a state of cardiac arrest at 12:20 p.m. local time, doctors said. During surgery, doctors discovered a bullet wound to his neck and a large wound on his heart.

Abe, 67, was the former Liberal Democratic Party leader and Japan's longest-serving prime minister, holding office from 2006 to 2007 and again from 2012 to 2020, before resigning due to health reasons. Since stepping down, he remained in the public eye and regularly appeared in the media to discuss current affairs.

The assassination of Shinzo Abe took place in broad daylight on a street in the Japanese city of Nara, a regional capital just east of Osaka.

Abe was delivering a speech in support of Liberal Democratic Party (LDP) candidates ahead of the upcoming Upper House elections scheduled for Sunday.

He had planned to head to Kyoto next, then to Saitama prefecture neighboring the capital Tokyo.

Video aired by the public broadcaster captured the moments before the shooting, showing the former prime minister speaking to a small crowd in front of Yamatosaidaiji railway station. In subsequent videos, two shots can be heard and smoke can be seen in the air. 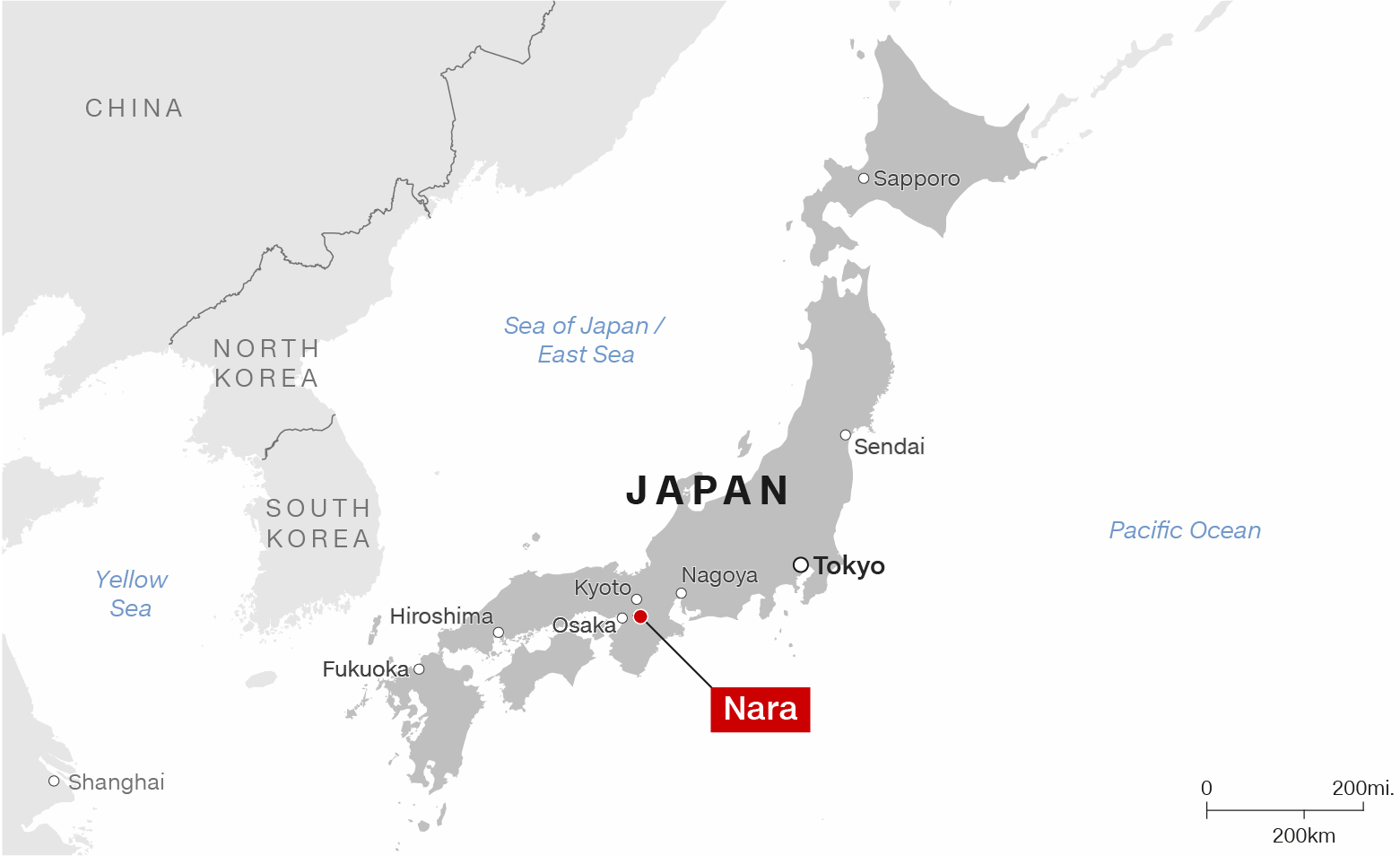 Kazuto Suzuki, professor of public policy at Hokkaido University, told CNN’s Max Foster that Shinzo Abe “left a lot of legacies in Japan and the world.”

He “very successfully transformed Japan into a modern state fitting into this globalizing world ... after the subprime crisis,” Suzuki said, adding that the former prime minister helped to recover the country from deflation through “Abenomics.”

“He also tried to change the constitution -- although he was not successful -- but he introduced the legislation on peace and security, which allows the partial implementation of the collective self-defense, which were for the last 70 years was was not allowed to have under the interpretation of our constitution,” he added.

One of Abe's biggest legacies, Suzuki said, “is the concept of Indo-Pacific.”

He was “trying to bring the United States, Australia and India [into] the effort of counterbalancing [and] counter-measuring with [the] emergence of China in East Asia," Suzuki said.

Michelle Lee, The Washington Post’s Tokyo bureau chief, told CNN that the best way to describe Abe is as “a towering political figure both at home and abroad.”

He is “probably the most recognizable Japanese politician outside of Japan. And even within Japan, even though he resigned in 2020 as prime minister,” she added.

“He was the youngest prime minister to be elected. He was the longest serving prime minister. He said so many things and created some controversies and scandals, but he was incredibly influential,” Lee said.