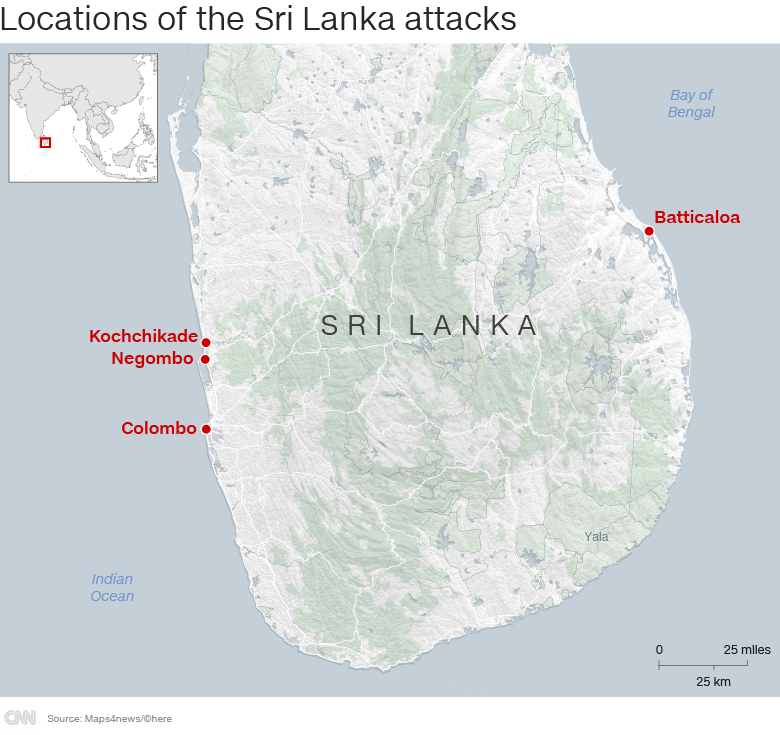 The seven bombings that occurred on Easter Sunday took place in locations across the country, largely in the capital, Colombo, but also in churches and hotels in other Sri Lankan cities.

The three churches that were attacked are St. Anthony's Shrine in Kochchikade, St. Sebastian's church in the nearby city of Negombo and Zion Church in the eastern city of Batticaloa.

Three of the hotels, the Shangri-La, Cinnamon Grand and Kingsbury hotels, are located in Colombo. A fourth bomb went off later in the day in front of the Dehiwala Zoo in Dehiwala-Mount Lavinia, 20 minutes outside of the capital.

Asela Waidyalankara, who witnessed the aftermath of the explosion at the hotel in front of the Dehiwala Zoo in Dehiwala-Mount Lavinia, said that he heard the explosion and went to his rooftop to check.

He said he saw two helicopters pass over the site, followed by the sound of ambulances and fire trucks. He told CNN that the smoke has stopped now.

Two people reportedly died in the seventh explosion, taking the death toll to at least 140.

Local media are reporting that the dashcam video below captured this morning's explosion outside St. Anthony's church in Colombo.

Multiple sources are reporting another explosion at a hotel in front of the Dehiwala Zoo in Dehiwala-Mount Lavinia, 20 minutes outside of Colombo.

The explosion comes on the heels of bombings at three churches and three hotels in cities around Sri Lanka this morning.

Official government news portal News.lk has reported that passengers departing from Bandaranaike International Airport (BIA) will need to be present at the airport at least four hours prior to their departure time, to account for extra security processes.

Sri Lankan Airlines, which is the ground handling agent for all airlines, added that only passengers will be allowed inside the airport terminal.

The airport is located to the north of the capital Colombo, on the outskirts of the city of Negombo, which was the site of at least one bombing today.

At least 20 foreigners have now been counted among the dead at Colombo National Hospital, according to hospital Director General Anil Jasinghe.

All schools across Sri Lanka will remain closed until Wednesday due to security concerns, according to official government news portal News.LK

Sri Lankan President Maithripala Sirisena has instructed law enforcement and defense to “take every possible step to maintain law and order” and to conduct investigations into the attack and bring to justice those responsible, according to the government’s official news portal.

“I have given instructions to take very stern action against the persons who are responsible for this conspiracy,” President Sirisena said, adding that the government has taken all required steps in responding to the attacks.

He also urged the Sri Lankan people to cooperate with the government in this situation.

Pakistan's leader Imran Khan has tweeted his condolences, saying "Pakistan stands in complete solidarity with Sri Lanka in their hour of grief."