Our live coverage has ended. You can read more about the massacre here.

The alleged attacker who killed at least 36 people, including 24 children, in Thursday's massacre at a child care center in northeastern Thailand had been in court prior to the attack on a drug possession charge.

In an order issued on June 17, Thai Royal police said the alleged attacker, Panya Kamrab, had been suspended from police duty on Jan. 20 after "he was accused of committed serious disciplinary violation."

The investigation into Kamrab found that he had been prosecuted with the charge of possessing drugs illegally.

The Thai Royal Police also said he had admitted later he took the drugs yaba and ICE (crystal meth).

In an undated search of his residence, police found a tablet of yaba in his house.

Yaba is a combination of methamphetamine and caffeine, which is a tablet usually crushed and smoked. It’s known in Thailand as “crazy medicine.”

He was later charged with possession of a Category 1 Drug (yaba or methamphetamine).

Kamrab had been due to receive a verdict on Friday, the Thai Royal Police said after the attack.

The United States is “horrified” by the mass killing at a Thai daycare center and condemns the violence, national security adviser Jake Sullivan said in a statement Thursday.

At least 36 people killed at a nursery in northeastern Thailand — including 24 children and one pregnant woman, according to a statement from the Royal Thai Police and reports from local officials on Thursday.

“The United States was horrified by the tragic shooting at a day care center in Nong ua Lam Phu Province, Thailand. The images are heartbreaking and our deepest condolences go out to the families who lost loved ones. We condemn this act of violence and stand ready to assist our long-standing ally Thailand in whatever they need,” Sullivan said.

Thailand's King Maha Vajiralongkorn and Queen Suthida will visit a hospital on Friday to meet with victims and family members of Thursday’s massacre at a child care center at the Nong Bua Lamphu provincial, according to a palace source with knowledge.

The Thai king and queen are expected to arrive in the area around 10 a.m. local time Friday (which is 11 p.m. ET Thursday).

On Friday, Thailand Prime Minister Prayut Chan-o-cha will travel to Nong Bua Lamphu province to meet with families of the victims from Thursday’s massacre at a child care center, according to a statement from the prime minister’s office.

The death toll in a massacre inflicted on a nursery in northeastern Thailand has risen to 36 — including 24 children and one pregnant woman, according to a statement from the Royal Thai Police on Thursday and local officials.

The suspect first attacked the child care center, and then targeted several bystanders on his journey home. After getting home, he killed his wife and 2-year-old stepson before killing himself, according to local police chief Maj. General Paisan Luesomboon.

CNN does not include the suspect in its death toll count.

At least 10 more people are injured, with six who are "seriously injured," according to a statement from the Royal Thai Police.

"Regarding the motivation, the police have not ruled out any possibilities, it could be from personal stress, or a hallucination from drugs, we have ordered a blood test," the statement added.

A previous statement from Thailand’s prime minister had referred to the incident as a mass shooting, but police say many of the victims died from “stabbing wounds.”

“After we have seen the wounds of the deaths, most of the deaths are from stabbing wounds. I have told you earlier that he had several guns. It turned out he had only about 1-2 guns,” Luesomboon told CNN.

The children were taking their lunchtime nap when the massacre occurred, according to several police officials CNN spoke with.

A pregnant teacher at the nursery who was in the room with the children was among the victims who died, according to another teacher who allegedly witnessed the attack. She spoke to local media Khom Chad Luek TV.

Luesomboon confirmed that a pregnant woman was among the dead in a statement to CNN.

British Prime Minister Liz Truss expressed her dismay and sent well wishes to the people affected by a gun and shooting massacre at a child care center in northeast Thailand on Thursday that killed 34 people, including at least 22 children.

The attack was allegedly carried out by a 34-year-old former policeman who was facing an ongoing court hearing over drug offenses, according to police. The suspect killed his wife and two-year-old stepson at home following the attack, before taking his own life, police said.

“I am shocked to hear of the horrific events in Thailand this morning. My thoughts are with all those affected and the first responders. The UK stands with the Thai people at this terrible time,” Truss tweeted.

Internationally, Thailand ranks 50th in terms of civilian ownership per capita, according to data from Switzerland-based Small Arms Survey (SAS).

Take a look at CNN's data report on gun culture around the world. 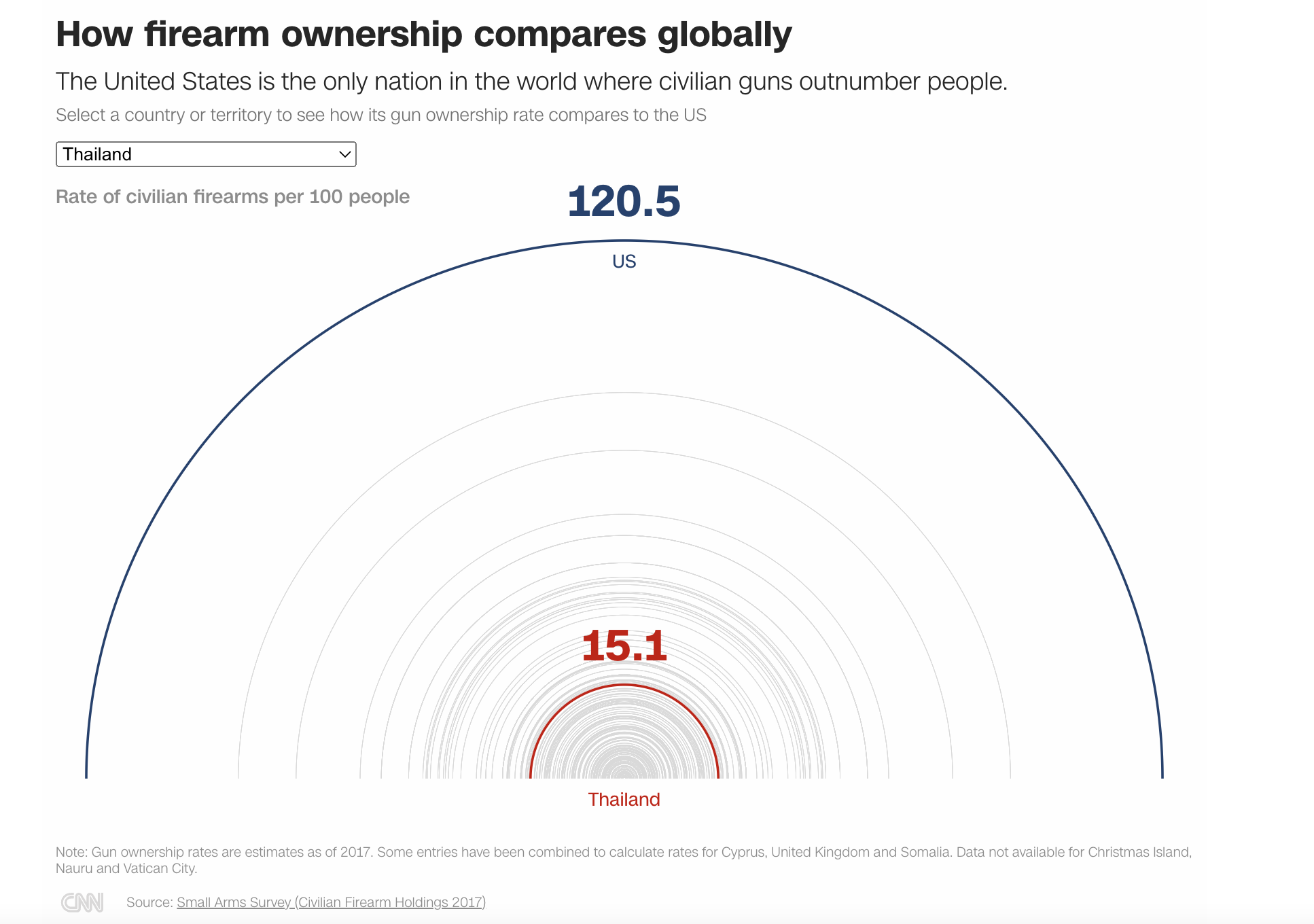 Thailand’s Prime Minister Prayut Chan-o-cha expressed his “deepest condolences” to the families involved in a massacre at a child care center in the country’s northeast on Thursday that has left at least 36 dead, including 24 children.

“I would like to express my deepest condolences to the families and the injured. I have instructed the national police chief to quickly enforce the law and all concerned parties to render help and rehabilitate those who are affected urgently,” a statement from Chan-o-cha’s office read.

The shooter, who has been identified as a former police officer, took his own life after the incident and also killed his wife and two-year-old stepson, Thailand's Central Investigations Bureau (CIB) said.

The attacker's family members are included in the current death toll.

At least 36 people have died, including 23 children, in a massacre at a child care center in northeastern Thailand on Thursday, according to local police officials.

The suspected attacker, who has been identified as 34-year-old former policeman Panya Kamrab, had appeared in court on drug charges in the hours before the attack at the nursery.

“[The shooter] went to look for his two-year-old son, but the boy was not there … so he started shooting as well as stabbing people at the nursery,” local police chief Maj. General Paisan Luesomboon told CNN.

The suspect then “managed to get into a room where 24 kids were sleeping together. All but one of the kids died in that room. He also used a knife to stab both children and staff at the center,” Luesomboon said, adding that Kamrab “has been on drugs and he has a record of taking drugs for years."

The massacre was carried out with several kinds of guns and a “long knife," according to Luesomboon.

After the attack on the nursery, the suspect made his way home where he killed his wife and 2-year-old stepson before taking his own life. He also targeted several bystanders on his journey home, according to Luesomboon.

“After he left the center and drove back to his home, he also hit his car into several bystanders along the way, and at some point, he stopped his car and tried to stab a bystander,” Luesomboon told CNN.