President Trump arrived in New Delhi on Monday evening, ahead of a day of formal talks.

As he boarded Air Force One in Agra, Trump was presented with a framed photograph of himself and the first lady standing in front of the Taj Mahal.

Prime Minister Narendra Modi has rolled out the red carpet for US President Donald Trump's two-day state visit to India.

Trump landed Monday morning in Ahmedabad, Modi's hometown, and the two leaders spoke to a large crowd at the Motera cricket stadium. Later in the day, Trump toured the Taj Mahal.

On Tuesday, the President will hold talks with Modi in New Delhi and attend a state banquet. Trump's wife, Melania, is joining him on the two-day trip, as is his daughter Ivanka and son-in-law Jared Kushner. 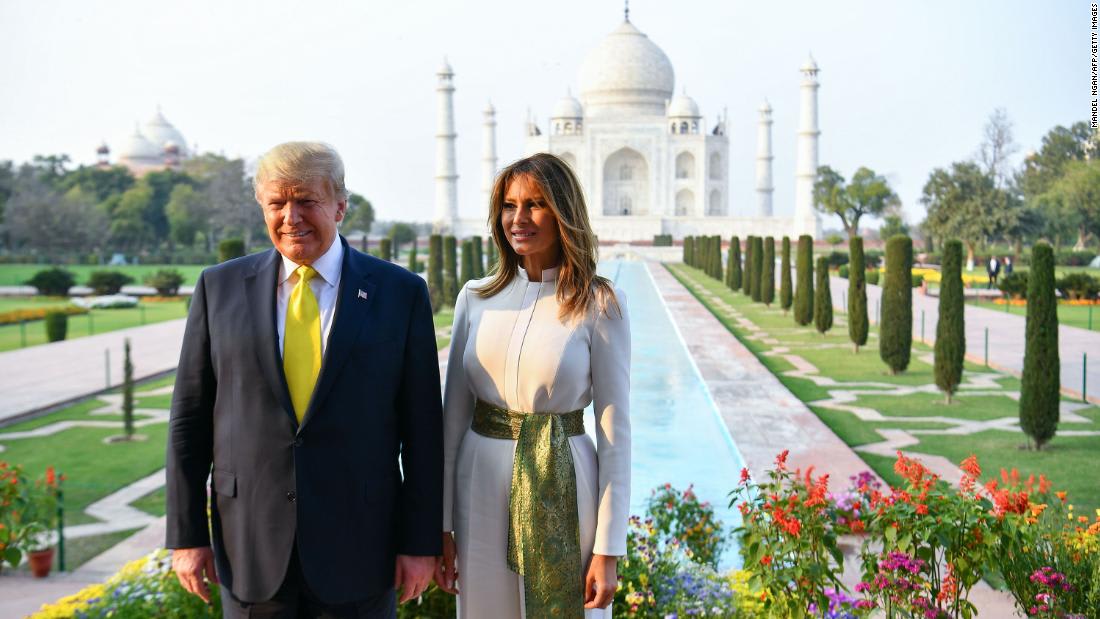 In pictures: Trump's visit to India

Police in New Delhi are attempting to restore order after violence in the capital over a contentious citizenship bill left a police constable dead on Monday, just hours ahead of US President Donald Trump's arrival.

Delhi's Chief Minister Arvind Kejriwal mourned the constable's death on Twitter, and called for peace on the city's streets. "Violence will not be tolerated by anyone. I request all people to please maintain the peace. No solution will come out of the violence,” Kejriwal said.

Indians have been protesting for months over the Citizenship Amendment Act, which gives Indian citizenship to immigrants from three neighboring countries -- but not if they are Muslim. Critics fear the bill could further marginalize the country's Muslim minority.

Delhi Police said that incidents of violence and arson had been reported in Delhi's North East district, adding that the force was making every effort "to restore normalcy."

"Strict action will be taken against miscreants and anti-social elements," police said.

New Delhi police are attempting to restore order after clashes during a protest over a contentious citizenship bill left a police constable dead Monday, just hours ahead of Trump’s arrival.

Delhi's Chief Minister Arvind Kejriwal called for calm, tweeting: "Very distressing news regarding disturbance of peace and harmony in parts of Delhi coming in." He urged the home minister to "restore law and order" and ensure "peace and harmony is maintained."

Protests have swept across India since December, when the country's parliament passed a bill that would give Indian citizenship to immigrants from neighboring countries -- but not if they are Muslim. Opposition parties say the bill is unconstitutional, as it bases citizenship on a person's religion and would further marginalize India's 200-million strong Muslim community.

Delhi's Metro rail service tweeted Monday that two stations in the area of the protests -- Jaffrabad and Maujpur-Babarpur stations -- would be closed Monday, for security reasons. The train stations are around 10 miles from where President Trump is expected to attend an event on Tuesday.

The Lieutenant Governor of Delhi tweeted Monday that he has instructed Delhi Police and the Delhi Commissioner of Police to ensure law and order is maintained. "The situation is being closely monitored. I urge everyone to exercise restraint for maintenance of peace and harmony," he said.

CNN has reached out to New Delhi Police for comment.

President Trump and the first lady took in the view of the Taj Mahal on Monday from an open courtyard, framed by hundreds of blooming plants in all different colors.

The couple signed a guest book before strolling together along a reflecting pool. A guide spoke to the pair as they walked.

Eventually, they emerged in front of the famous domed facade, holding hands as the late-afternoon sun set the white marble aglow.

Standing in front of the iconic symbol of lasting love, the Trumps stood for a while hand-in-hand before walking back toward the mausoleum.

Trump gestured to photographers and joked, “do you want to do a press conference now?”

The first lady described the monument as “lovely” and “beautiful.”

President Donald Trump spoke to reporters about his visit to India, the Democratic presidential primary race and a potential Afghanistan peace deal as he flew on Air Force One from Ahmedabad to Agra.

On his visit to India:

“I thought it was fantastic," Trump said, referring to the "Namaste Trump" rally in the Ahmedabad cricket stadium. “They worked really hard.”

“I am in no rush” for a trade deal, Trump said. “We are doing well with India, we are making deals.”

Trump says he's never been to the Taj Mahal (note: Trump once owned a casino by the same name in Atlantic City). “I hear it’s incredible," Trump said. "I think it’s going to be amazing."

On the Democratic race:

“It could go to the convention, it really could," Trump said.

“They are going to take it away from Crazy Bernie, they are not going to let him win...I actually think he would be tougher than most of the other candidates because he is like me but I have a much bigger base.”

On a potential Afghanistan peace deal:

President Trump’s arrival in Agra was a colorful affair, with dancers and drummers wearing peacock feathers welcoming him on another red carpet.

Trump smiled and clapped along to the music as he walked with first lady Melania Trump, daughter Ivanka Trump and son-in-law Jared Kushner. He took in each different performance, including dancers in vibrant horse costumes and musicians blowing horns.

President Donald Trump touched down in India on Monday ready to feel the love.

He was promised crowds -- big ones -- by his charismatic but increasingly nationalistic counterpart, Prime Minister Narendra Modi, who greeted Trump upon arrival with a hug.

And while a major trade agreement seems unlikely on this trip, Trump was more than happy to bask in the type of massive crowds that don't typically congregate when he travels abroad (except to protest him).

The whole event took on the atmosphere of one of Trump's political rallies, complete with the Elton John playlist. And that, aides say, is what Trump was looking for when he agreed to travel 8,000 miles for a night in India: an uproarious reception and the biggest crowd he's ever drawn.

Before he arrived, Trump placed his expected crowd count for his "Namaste Trump" rally in the range of 6 to 10 million, but given the city's population of 8 million and the stadium's capacity of 110,000, those figures seemed high.

Whatever the final number, the crowd was massive, including along Trump's motorcade route, where thousands of hand-selected members of Modi's Bharatiya Janata Party welcomed him into Ahmedabad in India's northwest. 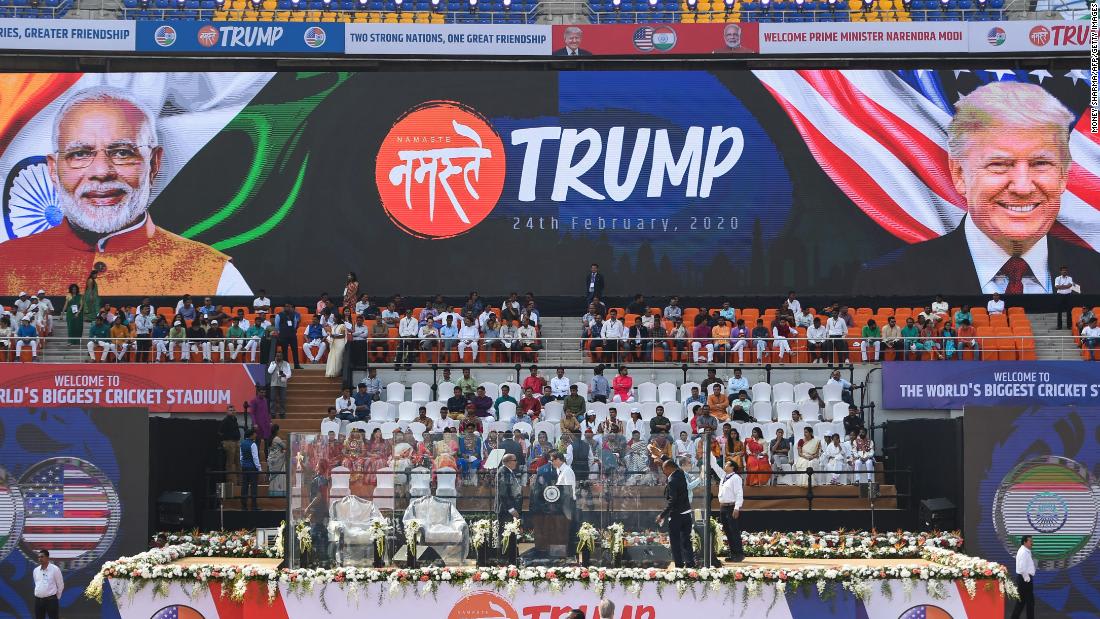 Trump lands in India ready to feel the love

"It’s an inhuman tragedy that has taken place in Gujarat where a wall has been built to hide a slum," Congress said in a tweet, referring to efforts to beatify Ahmedabad ahead of Trump's visit. "This wall is symbolic of all the distractions BJP comes up with to hide their failures in the economy and our society."

Congress tied the efforts to Modi's Hindu nationalist policies, and a citizenship bill which sparked outrage last year over perceptions it would further marginalize the country's Muslim minority.

"A wall has been built in Gujarat but a greater one has been built in the hearts & minds of Indians -- it is the wall of hatred. This wall constantly aims to divide our society and it is only us and our unity that can break it," read another tweet on the official account of the Congress party. "No wall can hide the fact that unemployment in India is at a 45-year high due to BJP’s own failed economic policies."

India’s current unemployment rate sits at 7.8%, up from 6.9% in January last year.