Our live coverage has ended. Read more about President Donald Trump's state visit to India, which concluded without any major agreements, here.

At a toast to start his official state banquet, President Donald Trump says he phoned Prime Minister Narendra Modi before his re-election last year to say he couldn't visit until after the vote.

This was a trip we were very much looking forward to. I called up the Prime Minister and said 'do you mind if I wait until after the election?' And he was not happy. He did not like that because they had already put the signs up," Trump said. "We don’t want to taking sides."

Trump said his two days in India were "the most beautiful I’ve had in my lifetime," adding that he would return.

Earlier, Trump and the first lady walked through an ornate ballroom with India's president. At one point, one of the guests came up to Trump and took a selfie.

President Donald Trump called his India state visit a "tremendous learning experience" during a courtesy call with the country's president.

He said he'd accomplished a lot of "productive work" during his trip and "seen a good deal of your country."

The US-India relationship has "never been better," Trump said.

As he prepares for a state banquet in New Delhi, President Donald Trump is lashing out against Senate Democratic leader Chuck Schumer for criticizing his coronavirus response.

Cryin’ Chuck Schumer is complaining, for publicity purposes only, that I should be asking for more money than $2.5 Billion to prepare for Coronavirus," Trump wrote on Twitter. "If I asked for more he would say it is too much. He didn’t like my early travel closings. I was right. He is incompetent!"

President Donald Trump concluded a showy state visit to India on Tuesday with plenty of impressive photos but without major announcements on trade or security.

Trump departed having cemented his close friendship with Indian Prime Minister Narendra Modi, upon whom he lavished praise during public appearances over the course of his 36-hour visit.

But Trump was frank that Modi puts up a tough trade fight and that their disagreements on tariffs and deficits wouldn't be resolved in the near-term.

And he made no reference when standing alongside Modi of the contentious situation gripping India over the status of Muslims in the Hindu-majority society. Hours before Trump arrived in the Indian capital, violent clashes between supporters and opponents of Modi's Hindu nationalist stance left more than seven people dead. 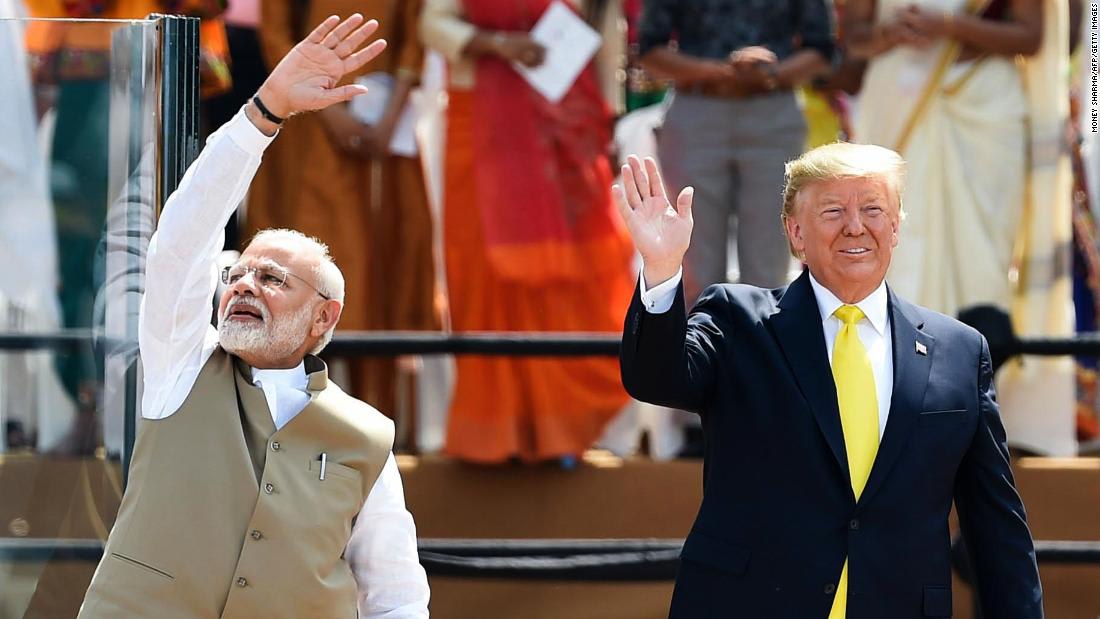 After spectacle, Trump and Modi turn to business

President Donald Trump said he wants “no help from any country” in the 2020 election and claimed that he hasn’t been given any.

President Donald Trump said the novel coronavirus was “very well under control" in the US and that most people infected with the virus are “getting better.”

Speaking in New Delhi, Trump expressed optimism that the “whole situation will start working out.”

Trump said his administration was putting “a lot of talent, brain power” behind combatting coronavirus.

The US has 53 confirmed cases of the virus; 39 of those have been patients repatriated to the country.

Trump said he’d discussed the situation with Indian Prime Minister Narendra Modi in their talks, and that India doesn’t have much of a problem with the virus.

President Donald Trump declined to say Tuesday whether he believes US intelligence assessments that Russia is attempting to meddle in the 2020 presidential election.

Asked directly whether he believes that intelligence, and what his message to Russian President Vladimir Putin might be, Trump instead turned to reports about Democratic Presidential candidate Sen. Bernie Sanders.

Trump said he was never briefed on intelligence showing Russian preference for Sanders.

They never told me anything about that," Trump said, "it was sort of a strange thing that they went to Bernie."

And he claimed, without evidence, that leaks about intelligence related to Russia were coming from House Intelligence Chairman Adam Schiff.

"If they don’t stop it, I can’t imagine that people won’t go after them," Trump said.

Asked about the verdict in the Harvey Weinstein case in New York, President Donald Trump told reporters in New Delhi on Tuesday he was “never a fan” and claimed that Weinstein was “loved” by democrats.

I was never a fan of Harvey Weinstein. He said he was going to work hard to defeat me. How did that work out by the way?” Trump asked the audience.

“I was just not a fan of his. I knew him a little. The people who liked him were the democrats. Michelle Obama loved him. Hillary loved him,” he said

When pressed about the outcome of the case and what it means for women and victims of sexual assault, Trump said it was a “great victory."