Another case of the Wuhan coronavirus has been identified in China’s Special Administrative Region of Macao, according to local health officials.

Dr. Lei Chin-ion, the director of the Macao Health Bureau, said a 52-year-old woman from Wuhan was confirmed as being infected with the virus after she went to hospital in Macao on January 21.

She had arrived in Macao from Wuhan on January 19 and had travelled by train and bus, Lei said at a news conference today. She claims she had no contact with anyone with a confirmed Wuhan coronavirus back home, Lei said.

The number of cases outside mainland China now stands at 8, with 1 in Macao, 3 in Thailand, 1 on the self-governing island of Taiwan, 1 in South Korea, 1 in Japan and 1 in the United States.

China is encouraging passengers traveling to and from Wuhan to change their travel plans during the busy Lunar New Year holiday period, by exempting them from service charges for refunds for all modes of transport.

The fee will be waived for all train, bus, ferry and air passengers that arrive and leave Wuhan, according to a statement from China’s Ministry of Transport (MoT).

In the coming days, hundreds of millions of Chinese are expected to begin traveling across the country and overseas as the annual Lunar New Year break gets fully underway.

The holiday is most important in the Chinese calendar and will see people from across the country cram themselves into homebound trains, buses and planes for family reunions

More than 60 routes connect Wuhan with other countries, including direct flights to New York, San Francisco, Sydney, Paris and London, as well as over a hundred internal flights to other major Chinese cities. The central city of 11 million people is also a hub for the country's high-speed rail network.

The 2003 outbreak of severe acute respiratory syndrome (SARS) is looming large over China's response to the Wuhan coronavirus. Hundreds of people died of SARS, and Chinese authorities were widely criticized for initially downplaying the severity of the disease and censoring news about its spread, potentially causing many more people to become infected.

There were fears that history was repeating itself in Wuhan, with many in China pointing to the discrepancy last week in the number of cases of the new coronavirus being reported overseas while no new cases were being confirmed in Wuhan itself, the center of the outbreak.

That seems to have shifted, however, with Chinese President Xi Jinping ordering "resolute efforts to curb the spread" of the virus Monday. The country's health authorities have since sprung into action, upgrading the response to the virus to the highest level and introducing travel restrictions in Wuhan itself.

The health authorities can never be too cautious when dealing with public health hazards, especially when fighting a completely new strain of deadly virus. While measures such as beefing up monitoring and disinfection efforts, and conducting temperature detection at airports and train stations, as Wuhan has already taken, are indispensable, it is also important to keep the public fully informed.
This is a lesson learned during the SARS outbreak at a very high cost in human lives. The country should not have to learn that lesson all over again.

Suspicions of an initial coverup will not go away, however. Wuhan did not introduce any screening measures until January 14, a month after the virus was first identified in the city. In the intervening period, a major meeting of the Hubei provincial party was held in the city, raising concerns an order might have been delayed so as not to disrupt the important political meeting.

Any officials found to have been sluggish to act or trying to downplay the virus will likely face severe punishment from the Beijing authorities. On Tuesday, the Central Political and Legal Affairs Commission issued a statement that only "sunlight" can destroy the virus:

Deceiving yourself will only make the epidemic worse, and turn a controllable natural disaster into a man-made disaster that brings with it a huge price.
At the beginning of the outbreak 17 years ago, due to insufficient information disclosure and the (concealing of) reports, the spread of the outbreak increased and also greatly hurt the government's integrity and social stability.
This painful lesson (should) keep us from repeating the same mistakes.

China on Tuesday announced it was adopting Class A prevention and control measures to tackle the Wuhan coronavirus.

Such measures are typically used for dangerous diseases such as plague and cholera. This means health officials will get sweeping powers to lock down affected areas and quarantine patients.

China previously used such measures in 2009 to tackle an outbreak of H1N1, introducing mandatory quarantine for anyone who had "close contact" with an infected person, including foreigners arriving in the country from areas where H1N1 outbreaks had been reported.

The virus itself remains classified as a Class B infection, despite the more serious response.

No health authority on the planet has ever tackled the challenge currently faced by China.

The country is grappling with a new coronavirus just as hundreds of millions prepare to travel during the Lunar New Year period -- the largest annual human migration on Earth.

During the Lunar holiday, people from across the country will cram themselves into homebound trains, buses and planes for family reunions. Others will take advantage of the time off to holiday overseas. Last year, close to 7 million Chinese tourists traveled abroad for Lunar New Year, according to state media.

The holiday -- the most important in the Chinese calendar -- comes at the worst possible time for health authorities racing to contain the outbreak which has put the rest of the world on high alert.

At a press conference in Beijing on Wednesday, officials said there is a possibility for the virus to mutate, but did not give any details on what those mutations could be when asked for details.

The Wuhan Coronavirus has reached 5 countries, including the United States with a case found in Washington state. Worldwide, 446 people have now been infected.

A third case has been confirmed in Thailand, said Li in Beijing on Wednesday.

The three new deaths were all in Wuhan in Hubei province where the virus is believed to have originated, Li added. The virus has now spread to 12 provinces and municipalities within mainland China.

Outside of mainland China there has now been 3 cases confirmed in Thailand, 1 case on the island of Taiwan, 1 case in South Korea, 1 case in Japan, and 1 case in the United States.

Li ended by saying the National health Commission would not be holding any press conferences until the end of the Chinese New Year holiday next Monday.

The US Centers for Disease Control and Prevention has activated its emergency response system on Tuesday in response to the Wuhan coronavirus.

The CDC’s Emergency Operations Center was recently activated in response to the outbreak of vaping-related lung injuries and Ebola.

The CDC activates this system temporarily to centralize how the agency monitors, prepares for and responds to public health threats.

According to the CDC's website, the center can deploy scientific experts, monitor the response and provide resources to local health departments.

A man in his 30s who recently returned from Wuhan has been confirmed as the US's first case of the new strain of the coronavirus.

The US Centers for Disease Control and Prevention announced the diagnosis Tuesday, saying authorities would now begin to step up health screenings at airports for passengers arriving from the Chinese province.

The patient, who has not been named, is currently in isolation at the Providence Regional Medical Center in Everett, Washington.

He returned from Wuhan on January 15, before health screenings begun, and sought medical care on January 19 after he began to feel unwell.

US officials are tracking who the man has been in contact with since returning home but John Wiesman, secretary of health for the state of Washington, said that he believed the risk to the public was still "low."

With the news that the Wuhan coronavirus has spread to the US, there are now five countries which have confirmed cases of the disease.

Outside of mainland China there has been one case confirmed on the island of Taiwan, one case in South Korea, one case in Japan, two cases in Thailand, and one case in the United States.

Other countries and territories are screening suspected cases of the virus, but none have been confirmed yet. 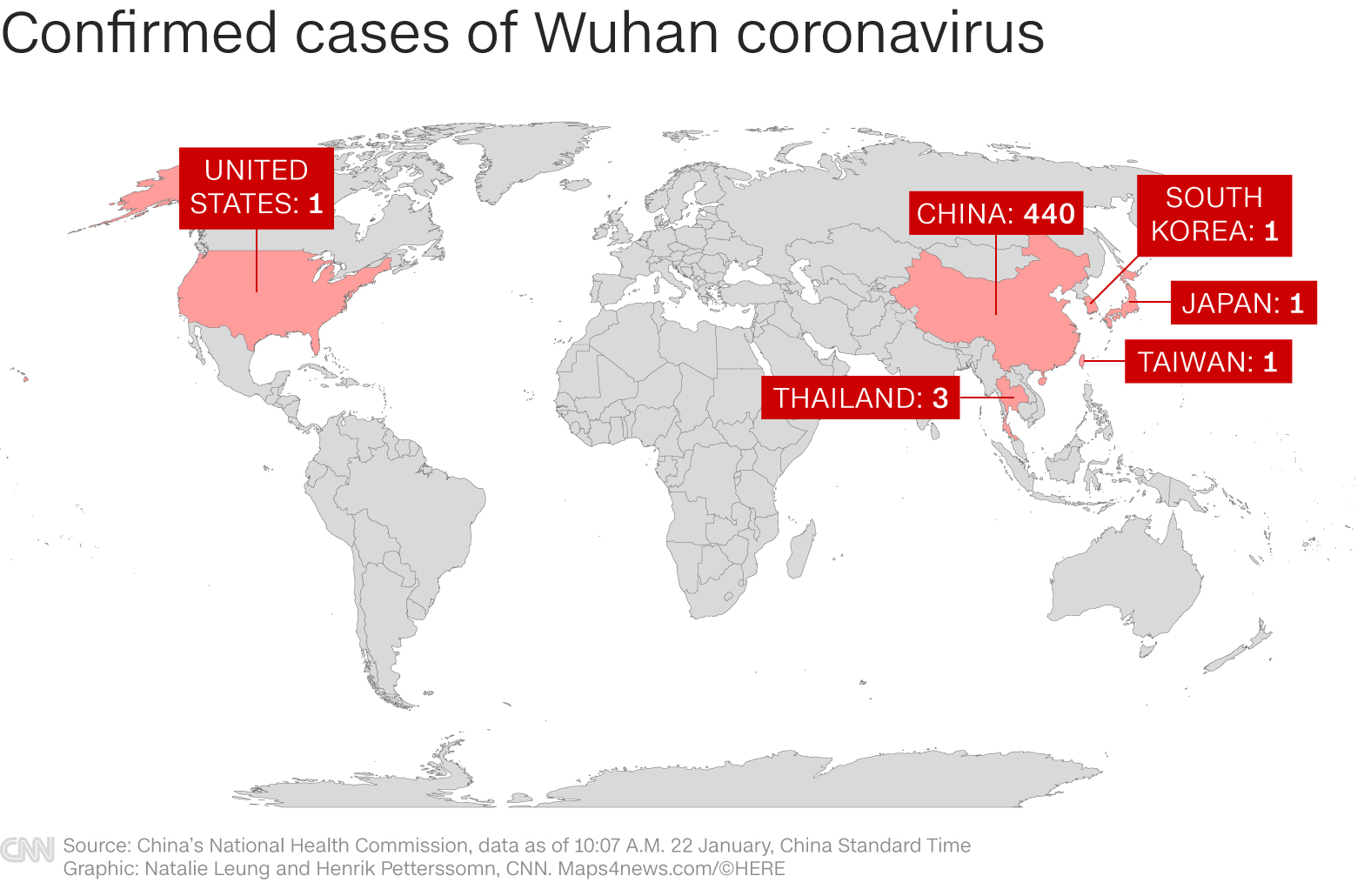