President Donald Trump assured the public that the United States has a potential outbreak of the deadly Wuhan coronavirus “totally under control.”

Trump was asked if he was worried about an outbreak during an interview with CNBC from the World Economic Forum in Davos, Switzerland.

Trump was also asked about the virus during a bilateral meeting with the head of Kurdistan, where he praised the Centers for Disease Control (CDC).

The Taiwan Centers for Disease Control (CDC) raised the travel warning for Wuhan to level 3 on Wednesday.

The level 3 warning means citizens should “avoid all non-essential travel” to the destination. Quarantines have also been implemented by several airports in Taiwan.

The self-governing island's Central Epidemic Command Center said in a press statement that “there is a sufficient number of surgical masks and the public is advised to remain calm.”

In a press conference on Wednesday, Taiwan's President Tsai Ing-wen told reporters that authorities have stopped travelers from entering and leaving the island due to the outbreak of the coronavirus.

London’s Heathrow Airport has joined airports around the world that are increasing health screenings and implementing new quarantine procedures as officials race to contain the spread of the Wuhan coronavirus.

The British airport created a separate arrival area for passengers travelling directly from regions that have been affected by the virus, UK transport minister Grant Shapps said Wednesday.

Speaking to Sky News, Shapps said: “This is to ensure that when flights come directly into Heathrow there is a separate area of people arriving. That change has been made.”

On the threat to the UK from the virus, Shapps said: “Public Health England moved this from very low to low but obviously we want to stay ahead of the issue so we’ll keep a very close eye.”

Here's how other international airports are meeting the challenge.

The developers of video game Plague Inc are seeing a spike in downloads from users in China. Writing on Twitter, Bloomberg reporter Zheping Huang points out that the game has jumped to the top of the iOS download chart. Market research firm AppAnnie confirmed that the game is currently #1 in China.

According to developers Ndemic, in Plague Inc players work to "bring about the end of human history by evolving a deadly, global plague whilst adapting against everything humanity can do to defend itself."

Chinese travelers crossing the country for the Lunar New Year may be in for transport hell if restrictions and checks are rolled out nationwide to contain the Wuhan coronavirus, but at least they'll have something to play to pass the time.

The Hong Kong Food and Health Bureau says it has designated two holiday camps as quarantine centers to isolate family members – or close contacts -- of potential patients infected with the Wuhan coronavirus.

Close contacts are individuals who will be identified as living and working in close proximity of someone infected with the virus. While the patient will be admitted to hospital, close contacts will be isolated at these camps. There are currently no confirmed cases of the Wuhan coronavirus in Hong Kong.

The city’s Health Secretary, Sophia Chan, says the government will meet on Thursday to decide if more such camps are needed.

If necessary, these quarantine centers can be activated within a few hours, she added.

Once identified and inside the camp, each family of confirmed patients would be kept under medical surveillance and each family will be isolated from each other.

Back in 2003, Hong Kong had set up similar quarantine camps to curb the spread of SARS.

As the Wuhan coronavirus continues to spread in China and beyond, Chinese state media has published a number of unusually scathing commentaries criticizing local authorities in Wuhan for their alleged incompetence.

In a commentary by People’s Daily on Tuesday night, the state-run newspaper criticized Wuhan officials for handing out 200,000 free tickets to the city’s tourist attractions even after the outbreak was reported.

“Officials only woke up from their dreams and postponed the event after public uproar,” said the commentary.

It also blamed officials for creating unnecessary fear by delaying the closure of a seafood market linked to the outbreak and failing to provide updates in a timely manner.

“This shows an ignorance of the prevention of infectious diseases, and a disregard for the health risks of oneself and others.”

Another commentary published by the Global Times said the dissemination of crucial information had “undoubtedly” taken too long.

With the Internet, people now demand greater transparency from government officials, it said.

“If people were aware of the real risks associated with the new pneumonia earlier, they would be more cautious and have extra thoughts before entering or leaving Wuhan."

The articles were published after Chinese President Xi Jinping ordered “resolute efforts to curb the spread” of the virus during a televised broadcast Monday.

Xi's intervention appears to have prompted health authorities to upgrade their response to the virus to the highest level. On Tuesday, officials in Wuhan announced a series of new measures, including the cancellation of upcoming Lunar New Year celebrations, which had been expected to attract hundreds of thousands of people.

The death toll from the Wuhan coronavirus has risen, as dozens more cases were reported across China and as far afield as the western United States sparking fears of a possible pandemic.

Nine fatalities: At least nine people have been killed by the virus. The majority are believed to be elderly with pre-existing conditions.

Cases across the world: Several cases have been confirmed around the world, including the first in the United States, in Washington state on the West Coast. Patients have also been identified in South Korea, Japan, Thailand and in the self-governing island of Taiwan.

In the heart of Wuhan's city center is the Huanan Seafood Wholesale Market.

Under normal circumstances it would be packed with shoppers scrambling for fish and seafood in preparation of the Lunar New Year.

The holiday pretty much revolves around the dining table, as reunited families catch up with each other and visiting friends.

But this year the market stands empty, its entranceway cordoned-off and guarded by police and security officials in medical masks.

The usually congested streets surrounding the market are also deserted. No one here is taking any chances.

Chinese authorities and scientists have pointed to wild animals sold at the market as the likely source of a coronavirus outbreak that has killed nine people and sickened 440 inside China in a matter of weeks. The virus has also spread to Thailand, Japan, South Korea and the United States, sparking fears of a potential global pandemic.

Though the market has been closed since January 1 for disinfection, health authorities have so far been unable to determine which animals harbored the virus.

The new strain of coronavirus, which can infect both animals and humans, is in the same family as the deadly severe acute respiratory syndrome (SARS).

Li Bin, China's national health commissioner, said Wednesday that officials are aware of around 2,200 cases of "close contact" with known virus carriers. Regarding suspected cases, 715 patients have been discharged while more than 300 patients remain on medical watch.

As the World Health Organization (WHO) meets in Geneva Wednesday to debate whether a global emergency needs to be declared over the Wuhan coronavirus, Netflix is dropping a new documentary series on... pandemics. 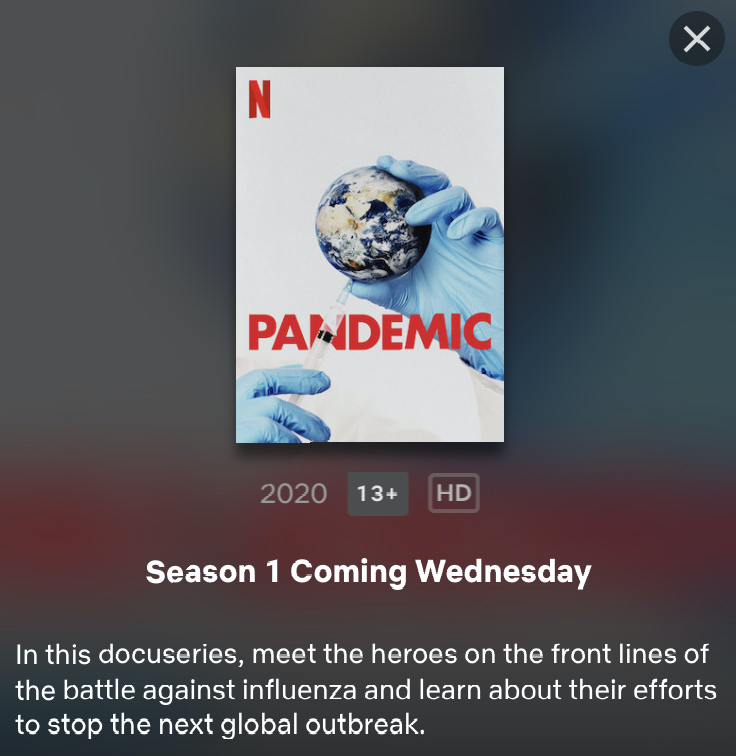 This isn't just fortuitous (or terrible, depending on your perspective) timing for Netflix's marketing team, it's reflective of growing concerns among the scientific community that we are overdue a major pandemic, on the scale of the Spanish Flu, which affected some 40% of the world's population and killed up to 50 million people.

CNN explored this in our own documentary "Unseen Enemy," which came out in 2017.

World-renowned epidemiologist Dr. Larry Brilliant, guides viewers through his difficult decisions as he worked on the teams that forcibly vaccinated the last remote villagers against smallpox. Others describe how the global spread of HIV/AIDS could have been stopped if governments and public health bodies had acted more deliberately to warn the public. Dr. Brilliant warns now that there may be 30 emerging human pathogens that have the potential to become epidemics.