Our live coverage of the Australian wildfires has ended, but you can read more here.

Firefighters are still battling at least 12 emergency-level blazes across New South Wales after a day of "catastrophic" fire risk in heavily populated parts of the state.

An emergency warning is issued when a fire is imminently threatening a town or community or has broken through containment lines.

In total there are 85 fires burning across New South Wales, half of which are out of control.

A number of firefighters have been injured on the front lines, including one emergency worker who suffered a fractured arm and ribs.

So far, major population centers appear to be mostly unscathed. There are reports of injuries and property damage, but authorities have not confirmed the exact number.

"We've still got many hours yet of these strong, dry winds."

New South Wales is "entering uncharted territory" with fire emergencies all across the coast of Australia's most populous state, Minister for Police and Emergency Services David Elliott said in a speech to parliament on Tuesday.

"What we've burnt through so far this bushfire season, and we haven't even reached summer ... is actually three times the amount we burnt in the total period of last season," he said.

"This is a very real emerging disaster which we need to take on and consider as being something that this state may not have ever seen before."

Although a lot of attention today has been focused on the New South Wales capital of Sydney, so far most of the serious blazes have been in the state's northeast.

There are 12 emergency fires burning in the state, with only a few minor blazes reaching the outskirts of Sydney's suburbs.

A catastrophic fire warning is still in force for the Sydney region due to dangerously dry and windy conditions. 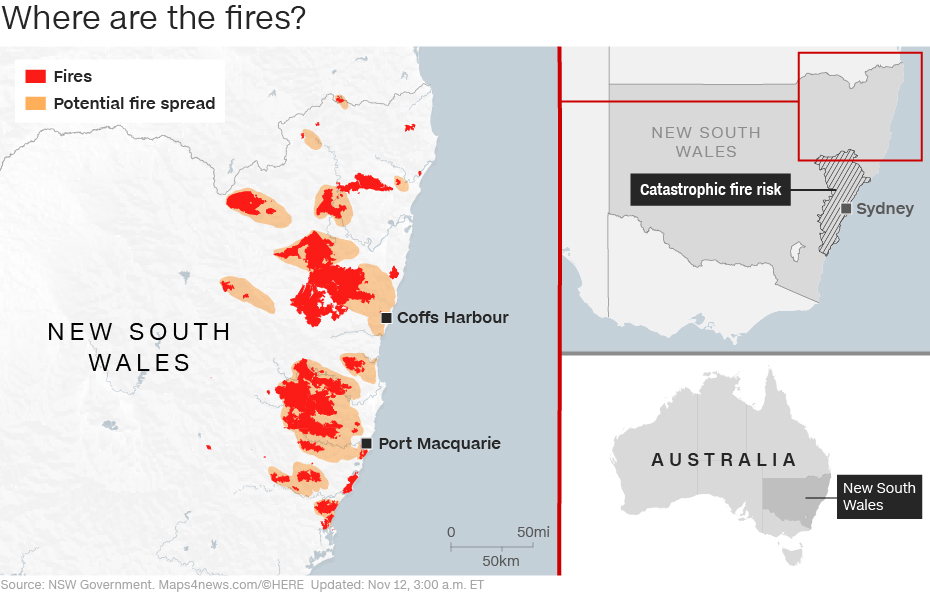 There are still at least 12 emergency fires burning in NSW as of Tuesday afternoon local time, out of a total 78 blazes across the entire state.

An emergency warning is issued when a fire is imminently threatening a town or community or has broken through containment lines.

"We simply can't rest easy at this stage -- we've got many hours left yet," Fitzsimmons said.

He added that while the situation was complicated in the northeast of the state, fires around the suburbs of Sydney had mostly been contained.

"We've had a number of fires in and around the Sydney basin area but the collective efforts of firefighters have meant that they've been able to get on top of those fires and bring them under control very quickly," he said.

Wild fires are raging across New South Wales -- but in a town south of Sydney, a nine-year-old allegedly lit a small blaze, CNN affiliate 9 News reported.

The boy reportedly set a small grass fire using a gas blowtorch on Tuesday in Worrigee, south of Sydney. Police tracked down the boy -- who had been hanging out with a group of other children -- and gave him a warning.

But the boy wasn't the only one to intentionally set fires, despite New South Wales' total fire ban.

Yesterday, a 27-year-old man allegedly lit a small campfire to boil water for cups of tea. He's been fined 2,200 Australian dollars (around $1,500).

In western Sydney, another man was reportedly caught burning fence post in a barbecue -- which led to a secondary blaze. That man has been hit with an infringement notice.

The state of New South Wales is home to Sydney, Australia's most populous city.

But as fires rage around New South Wales, how much danger are Sydneysiders actually in?

Although wildfires have broken out in two of Sydney's northern suburbs, most parts of the city are not currently in immediate danger.

But the situation can change fast. The state's fire service is still forecasting "catastrophic fire danger" for greater Sydney -- the highest level of bush fire danger.

A small but out-of-control fire has broken out in the northern suburbs of Sydney, with emergency services saying it is "spreading quickly."

It is the closest bushfire to the heart of Australia's largest city with most of the major blazes to the north of Sydney.

NSW Rural Fire Services said that residents were advised to not leave their properties and they were working to contain the fire in South Turramurra.

Two public schools have been destroyed in the New South Wales wildfires, the state's Minister for Skills and Tertiary Education Geoff Lee said in state parliament on Tuesday.

Lee confirmed that an employee of a skills college had also been killed in the blazes, although he didn't elaborate further.

Mass school closures were announced on Tuesday amid worsening fire conditions across NSW. In total, almost 600 schools and colleges were shut across the state.

Nine other schools were evacuated on Tuesday as fires approached.

Lee didn't say whether the two schools had been destroyed on Tuesday or in earlier fires, which have been ravaging the state this month.

Three people have been killed in the fires and at least 100 homes destroyed so far.