Our live coverage of the New Zealand eruption has moved here.

Right now it's 4 a.m. in New Zealand, so updates have slowed down from the region for the night.

Sunrise at White Island is at 5:43 a.m., which is when a New Zealand Defense Force ship is expected to deploy drones and observational equipment to assess the environment. Overnight authorities said a specialist disaster victim identification team were also awaiting deployment in the nearby port town of Whakatane. Police have called it a "recovery operation."

New Zealand Prime Minister Jacinda Arden arrived in Whakatane earlier, where she was due to meet with search and rescue authorities.

She is expected to give an update at a press conference as the nation wakes up at around 7 a.m. local (1 p.m. ET).

In the latest update from authorities, at least five people were confirmed dead from the volcano eruption, 18 people were in hospital and at least 10 people were still missing.

However, police earlier police said "no signs of life have been seen at any point," and that based on the information they have, they "do not believe there are any survivors on the island."

Sitting 48 kilometers (around 30 miles) offshore, White Island is home to New Zealand's most active volcano -- 70% of which is under the sea, according to science agency GeoNet.

White Island has been a private scenic reserve since 1953, and each year, more than 10,000 people visit the volcano.

Its most recent eruption was 2016 but it was "short-lived," and according to Reuters, the island's last fatal eruption was in 1914 when 12 sulphur miners were killed.

Australian Prime Minister Scott Morrison said he had spoken with New Zealand Prime Minister Jacinda Ardern "several times this evening" and that there was "still no comprehensive or confirmed information about the well-being of all those who were impacted by the volcano."

Morrison said there were still people who are "unaccounted for, including Australians" and stressed that everyone must be patient as it will "take some time for us to get a clear indication."

He added that authorities have been able to identify a number of Australians so far who have been hospitalized.

We hope to know more in the morning, however we must prepare for some difficult news in the days ahead," Morrison added.

In the statement, which was posted to Twitter, Morrison thanked those who "put themselves at risk today to protect and save others, and those now caring for the injured."

You can read his full statement below:

Police say they do not believe any survivors are left on White Island, according to the latest update on their website.

"No signs of life have been seen at any point," the statement reads. "Based on the information we have, we do not believe there are any survivors on the island."

Police added that they are "working urgently to confirm the exact number of those who have died, further to the five confirmed deceased already."

Earlier police estimated that at least 10 people were still missing on the island.

At first light on Tuesday morning, a New Zealand Defence Force ship will deploy drones and observational equipment to assess the environment and situation, police said in the statement.

"Both New Zealanders and overseas tourists are believed to [be] involved, and a number were from the Ovation of the Seas cruise ship," police added.

The volcano on White Island, also known as Whakaari, erupted three times on Monday, according to the nearby Whakatane District Mayor Judy Turner.

"We have been advised that the situation on Whakaari / White Island remains extremely volatile,” Turner said.

There have been three eruptions and there is unpredictable ongoing volcanic activity.”

"At this stage the elevated risk level is contained to Whakaari / White Island," Turner added.

Monday's deadly eruption speaks to how unpredictable volcanos can be.

Steven Sherburn, a vulcanologist from GNS Science which monitors volcanic activity in New Zealand, said that there had been "unrest" in the volcano for weeks, but people had continued to visit the island.

"There was nothing particularly unusual about today," he said of the activity on Monday prior to the eruption.

Sherburn noted that, while GeoNet monitored and rated volcanic activity, it didn't have the ability to prevent people from going on the island.

Currently, White Island has a GeoNet rating of three.

Police say it's too dangerous to access White Island right now -- and according to experts, it's not yet clear when it will be safe.

The island remains a no-fly zone, and emergency services are unable to go on the island as there's a risk it could erupt.

Dr. Jessica Johnson, a volcanologist at the University of East Anglia in England, said that eruptions could be unpredictable if they involved water.

"There is a chance of another eruption of similar size ... and potentially bigger," she said.

Derek Wyman, a senior lecturer at Sydney University, said the authorities would need to monitor the volcano for around a week to see if the volcanic activity continued, especially as there was no way to predict whether it would erupt again. 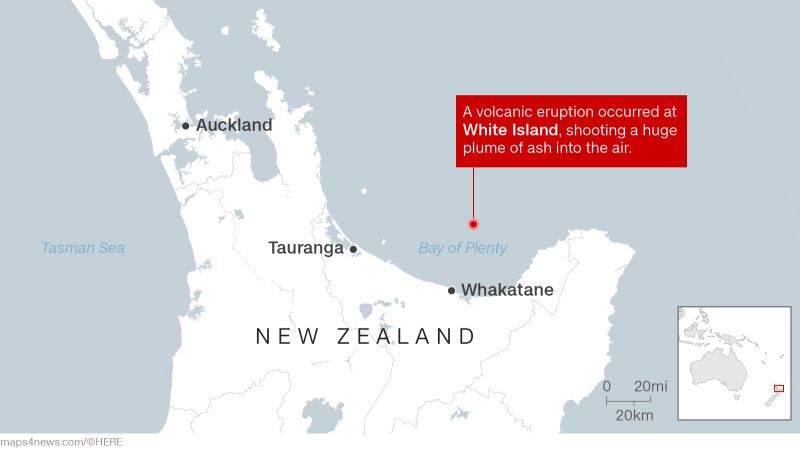 Numerous government and emergency agencies are meeting at the Whakatane District Council office, including the Ministry of Civil Defence and St John New Zealand.

If you're just joining us now, here's what you need to know: