Warren Buffett is Wells Fargo's largest and most powerful shareholder. (Berkshire Hathaway (BRKB) owns nearly 10% of the troubled bank.) So it's not a surprise that shareholders wanted to hear his thoughts on what's going on there.

In April, Buffett weighed in on what kind of CEO Wells Fargo should hire next. Now Charlie Munger shares his thoughts:

Buffett also said he wished CEOs wouldn't go away "so rich" after doing dumb things. That got applause from the crowd.

The great thing about the Berkshire Hathaway (BRKB) shareholder meeting is that it is devoted almost entirely to questions from investors. The first one lobbed at Buffett on Saturday was about Berkshire's latest flurry of stock buybacks. Will that continue or is the company looking for acquisitions?

Buffett said that he has "no ambition to spend a dime" on more buybacks unless he thinks Berkshire shareholders will be better off. But as long the stock trades at what he believes to be a discount to the broader market, "we could easily spend very substantial sums" on more repurchases.

Interest in what Warren Buffett has to say isn't slowing down. Attendance at this year's Berkshire Hathaway's (BRKB) shareholders meeting is setting a new record, Buffett told the crowd.

Buffett is famous for being a bit of a technophobe. But that hasn't stopped him from launching a new app -- with the help of Apple (AAPL) CEO Tim Cook.

If you go to the App Store, there is now a new game called Warren Buffett's Paper Wizard. It's a nod to Buffett's childhood job of delivering newspapers. Buffett used to do a live paper toss at the shareholder meeting, but he's now doing it virtually instead.

In an amusing video promo at the start of the shareholder meeting Saturday, Buffett was shown trying and failing to come up with ideas for an app, including a Time Machine where Buffett tells a kid version of himself to buy Apple stock -- which is now Berkshire's largest holding.

Cook then comes up with the idea for a newspaper toss.

Buffett told reporters in Omaha that cryptocurrencies are worth about as much as the button on his jacket. 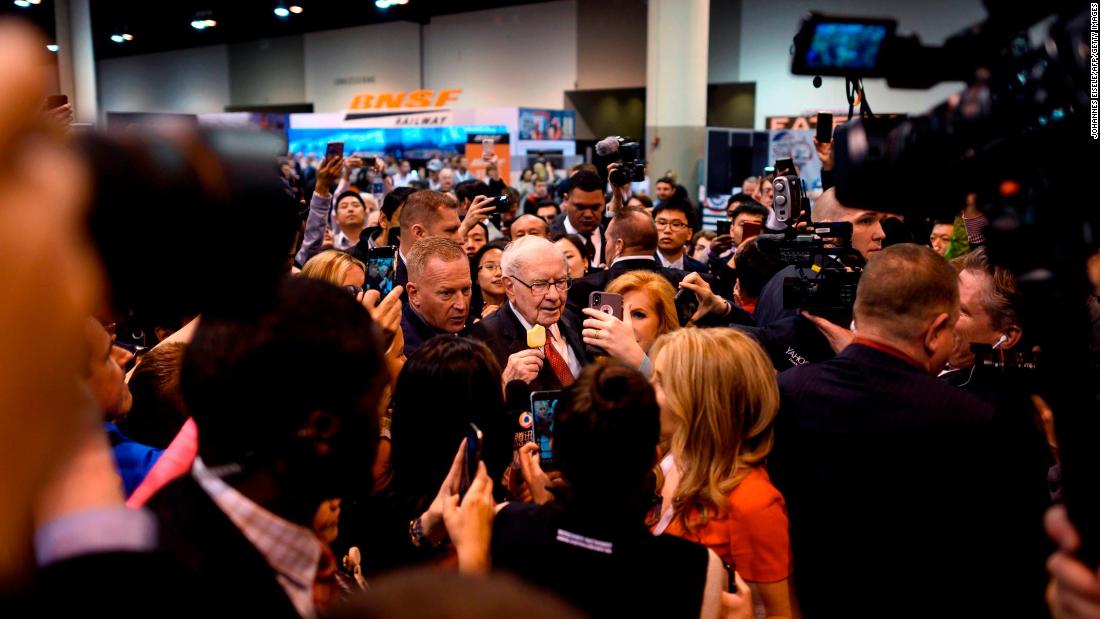 Berkshire Hathaway's latest earnings came out in conjunction with the company's annual shareholder meeting this weekend. Here's a quick look at the numbers -- and an unusual admission about its investment in Kraft Heinz (KHC).

But Berkshire (BRKB) disclosed a bit of a bombshell in its 10-Q filing with the SEC about its nearly 27% stake in troubled food giant Kraft Heinz. Berkshire said that it did not report any income from Kraft Heinz because it doesn't have enough data from the company.

"As of May 3, 2019, Kraft Heinz has not filed its 2018 Form 10-K with the Securities and Exchange Commission. In addition, Kraft Heinz has not made its financial statements for the first quarter of 2019 available to Berkshire. Accordingly, Berkshire does not have the necessary financial information to determine its share of the earnings and other comprehensive income of Kraft Heinz for the first quarter of 2019. As a result, Berkshire’s first quarter 2019 earnings and other comprehensive income exclude such amounts."

During a walk-around with CNN's Poppy Harlow and other reporters Saturday morning before the Berkshire shareholder meeting, Buffett said that the news is "very unusual" and suggested that it may be due to a dispute that Kraft Heinz is having with its auditor PwC.

The "Oracle of Omaha" got a rock star's reception before he and Berkshire vice chair Charlie Munger answer questions from investors.

Beyond Meat (BYND) just had a scorching debut on Wall Street and Impossible Foods is having trouble keeping up with demand for its plant-based burgers. But Berkshire-owned Dairy Queen, or DQ for short, isn't shy about serving up guilty pleasures like burgers and ice cream.

"We looked at plant-based proteins a few years ago but the timing wasn't right," said DQ CEO Troy Bader. "There may be a time for it but with some trends you don't want to lead."

Still, Bader acknowledged that consumers are trying to eat in a more healthy manner. And while you shouldn't expect DQ to start selling vegan burgers any time soon, the company has been mixing up its menu a bit to cater to people who may be counting calories.

A group of top female investors held what they dubbed the Variant Perspectives Conference on Friday at the Hilton across the street from the CHI Health Center where the Berkshire gathering was taking place...and Buffett showed up.

Buffett said it was "long overdue" for a conference led by women investors, adding that "track records should open doors." He also said:

The stock doesn't know who owns you."

Barbara Ann Bernard, founder and chief investment officer of Wincrest Capital and one of the Variant event's organizers, told me she was thrilled that Buffett showed up and noted that after years of not having many high profile women at Berkshire, the company now has four female directors on its board.

"Men are not the problem. They are the solution," Bernard said.

Bernard noted that hedge funds run by women have outperformed a broader index of funds over the past few years. That's proof that more women deserve a chance to be portfolio managers.

"This isn't a pity party," she said. "The issue is scale. We need more mentors."