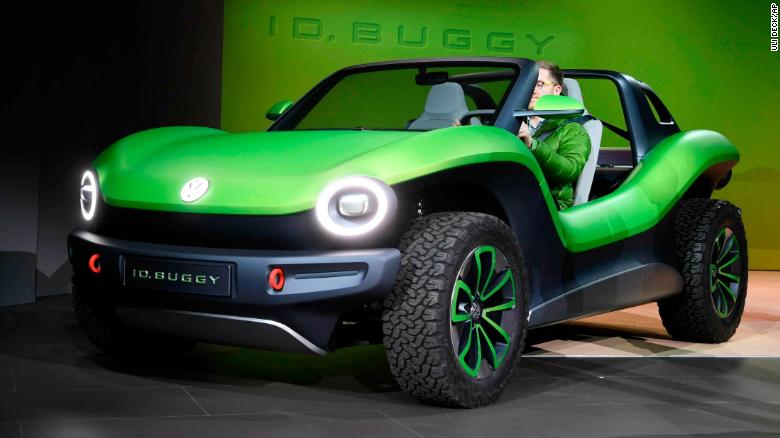 That crazy cute electric dune buggy concept car Volkswagen unveiled at the Geneva Motor Show may not be just a concept after all.

It has no doors, no side or back windows and only fittings for a simple cloth roof.

If you are out driving and it rains, you get wet," said VW's head of design Klaus Bischoff, with a shrug.

But VW thinks there is a market for this car, especially in the U.S. -- where beach buggies were originally created in the 1960s. So, VW is speaking with some low-volume car manufacturers about producing perhaps 5,000 of these a year.

In a separate interview, Scott Keogh, head of VW in the US, said that emotional products like the dune buggy will be even more important for VW in the future as electric motors do away with the engines and transmissions that make vehicles so different from one another today.

Cars like this give customers a fun way to engage with a brand.

This funny-looking, three-wheeled electric number comes from Estonia. But the company behind the car thinks the United States could be its largest market.

The vehicle is called Nobe. It features two doors, three seats, three wheels (with three-wheel-drive) and a removable hardtop. It's yet another example of the kind of quirky and unexpected vehicles that turn up at the Geneva show. 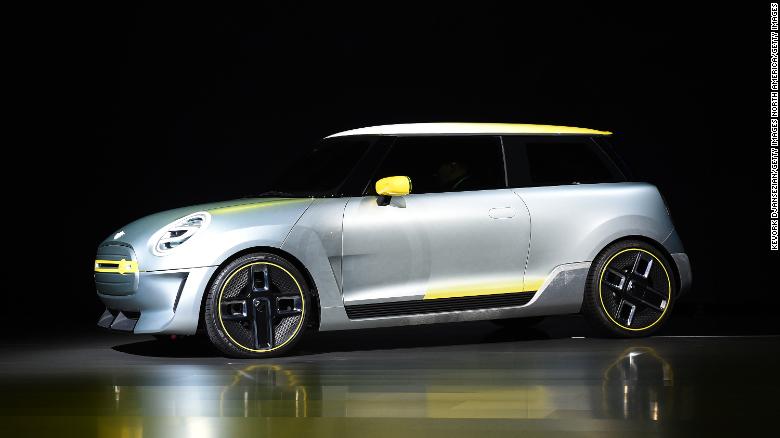 Auto executives in Geneva are warning of disastrous consequences if Britain crashes out of the European Union without a deal that protects trade.

BMW board member Peter Schwarzenbauer said Tuesday that the German carmaker may close its Mini plant near Oxford if the United Kingdom crashes out of the European Union.

This would be a huge burden of the Mini brand," he told Sky News. "We would need to consider what it exactly means for us in the long run. And for Mini this is really a danger, no doubt about it.”

Asked whether BMW would stop making Minis in the United Kingdom, Schwarzenbauer said it was a possibility. “We at least have to consider it," he said.

Toyota also said that a disorderly Brexit would put its UK operations at risk. Asked about reports that Toyota would reduce its investment in the United Kingdom if there's no deal, Toyota Motor Europe CEO Johan van Zyl said such a scenario would be "very negative."

"Of course, we are still hoping, we’ve invested in our facilities, that we would like to avoid that by improving our competitiveness," he told the BBC. "But if the hurdle has become so high that you cannot achieve it, then of course, you can’t avoid it.”

It's a big day for the Morgan Motor Company.

The niche English automaker unveiled the Plus Six on Tuesday, the first supercharged car in its long history. The Morgan family also said the company has a new majority owner.

"To really fulfil Morgan’s full potential and secure our long-term future, both the family and management team felt it was essential to bring in a strategic partner," said Morgan Chairman Dominic Riley. The company has 190 employees.

The Plus Six could help set the company on a new path. Weighing only 1,075 kilograms (2,370 pounds), the roadster comes with a BMW engine that produces 335 brake-horsepower and can propel the car from zero to 62 miles per hour in 4.2 seconds.

Here's another photo of the new car.

Spare a thought for the automaker that comes to Geneva without a supercar.

Of course, there are a bunch. And they're not shying away from unveiling models that they hope will be huge hits with consumers who have yet to make their first million.

Renault showed off a new version of its compact car, the Clio, which will be offered for the first time as a hybrid.

Volkswagen, which says it wants to make electric vehicles for millions, not millionaires, stuck with that theme in Geneva, showing off a new version of the Passat that will be sold in Europe.

Indian industrialist Ratan Tata was on hand to see the launch of Tata Motors' newest car, the Altroz. Still, the supercars are clearly the crowd-pleasers.

"I would have expected a bit more applause," Tata Motors CEO Guenter Butschek joked after one of the company's new models made its debut. "Isn't it stunning?"

The Geneva Motor Show opened to the media on Tuesday, with the first press conferences scheduled for around 8 a.m. local time. By the time the car show closes for the day, nearly 70 press conferences will have taken place.

The show will open to the public on Thursday. For now, journalists rule the roost, racing from one press conference to the next. Reporters chat with company execs, while photographers jostle to get the best shots of new models.

Carmakers, meanwhile, are out to impress. Many use huge video screens and flashy promo videos during their press conferences. New vehicles are covered until their big moment, when the cloth is removed amid waves of camera flashes.

Here's a couple of photos to give you a sense of the scene.

Renault CEO Thierry Bolloré says that dramatic changes in the auto industry mean that his company needs alliance partners Nissan and Mitsubishi Motors more than ever.

We need more alliance, we need better alliance," Bolloré told CNN Business during an interview in Geneva. "Why? Because the landscape is changing dramatically. The automotive landscape is in disruption."

Bolloré was speaking just hours after a court in Tokyo cleared the way for Carlos Ghosn, the former chief of Nissan and Renault, to be released on bail after spending more than three months in jail. Ghosn has been replaced as chairman of Renault and Nissan, and is awaiting trial in Japan on charges he understated his income and abused his position.

Bolloré said that Ghosn's arrest had not changed the alliance's strategy. He said that recent discussions with Nissan CEO Hiroto Saikawa have been positive, and that all three companies recognize the importance of a deeper alliance.

"This has nothing to do with the latest events," said Bolloré, who was named Renault CEO in January after Ghosn resigned. "Even before, we knew we permanently have to improve the alliance, make it more efficient for the good sake of the three companies."

Someone, Bugatti won't say who, paid €16.7 million (almost $19 million) for this one-of-a-kind supercar. Based on the Bugatti Chiron, La Voiture Noire (The Black Car) is a tribute to the Bugatti Type 57 SC Atlantic from the 1930's. Only four of those cars were made, three of which are known to survive. They are worth at least $50 million each.

The idea to do a new take on the Depression-era model was suggested by the buyer, Bugatti said.

La Voiture Noire maintains the general shape and proportions of the Chiron, but the body has been subtly changed all over. Behind the seats, under a lattice of small triangles cut into the car's carbon fiber skin, is Bugatti's 1,500 horsepower 16-cylinder engine.

Asked about the nationality of the buyer, Bugatti CEO Stephan Winkelmann would only say that the car will remain in Europe.

Audi has unveiled its highly anticipated electric SUV concept, giving fans a taste of what the carmaker’s electric future could look like.

The Audi Q4 e-tron compact SUV is an early look at a model expected to enter full production by the end of 2020.

Audi brought only electrified vehicles to Geneva — four battery electric models and four hybrids, reflecting its strategic shift away from internal combustion engines. The Volkswagen Group's luxury brand plans to offer 12 pure electric vehicles by 2025, as well as an electrified version of each of its core models.

To pull off the move away from gasoline and diesel, Audi has committed to spending about €14 billion on electric mobility, digitalization and autonomous driving by the end of 2023.