Bezos' appreciation, however, comes after Amazon has been repeatedly accused of labor violations.

Bezos also thanked the engineers at Blue Origin for building the New Shepard, along with the town of Van Horn, Texas for allowing the company to utilize the area.

Wally Funk, the 82-year-old pilot who is now the oldest person to travel to space, said she felt "great" during the Blue Origin spaceflight.

"I've been waiting a long time to finally get it up there, and I've done a lot of astronaut training through the world — Russia, America — and I could always beat the guys on what they were doing because I was always stronger and I've always done everything on my own," Funk said during the press conference.

She thanked Bezos and indicated that she's not slowing down any time soon.

"I loved every minute of it. I just wish it had been longer," Funk added. 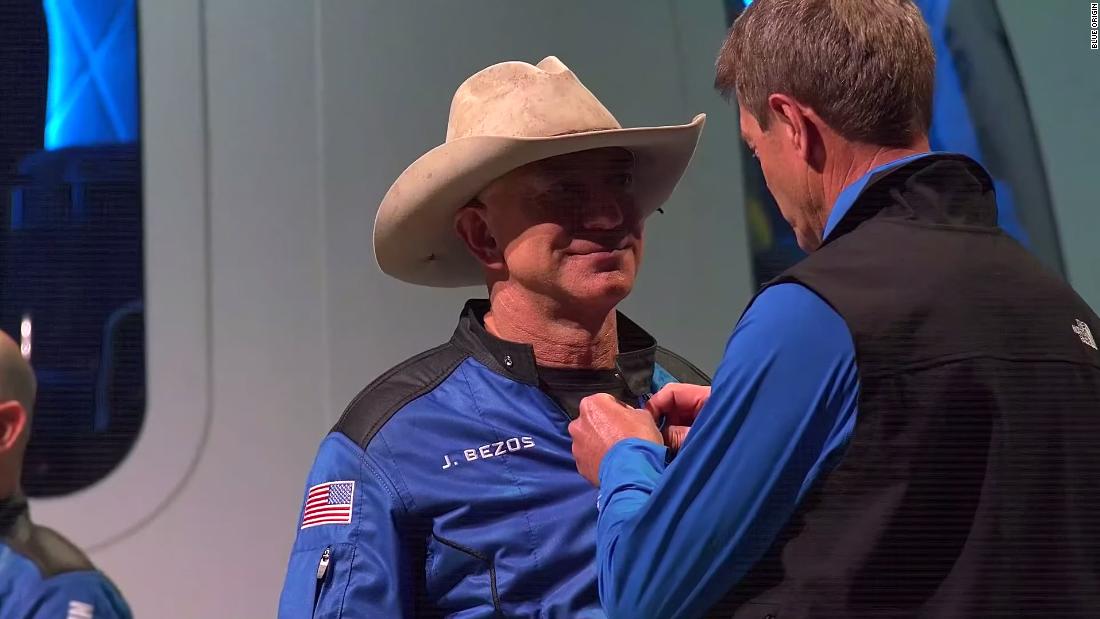 Each passenger aboard the New Shepard rocket was presented with Blue Origin's own wings to commemorate their trip.

Jeff Ashby, the senior director of safety and mission assurance and a former space shuttle commander, presented the pins to Jeff Bezos, Mark Bezos, Wally Funk, and Oliver Daemen after the flight on Tuesday.

The pins are in the shape of the letter "A." The side pieces represent "the road to space and our feather logo is the crossbar," Ashby said.

"At the top, a tiny blue sapphire to remind these folks that they are from planet Earth and that they have a mission to protect this home," he added.

For context: It is important to note the pins are not Federal Aviation Administration commercial astronaut wings. The FAA awards wings to “crewmembers” but not “spaceflight participants." The passengers on the New Shepard were only in space for a few minutes, and coupled with Virgin Galactic's flight, it has led to debate on what exactly constitutes an "astronaut."

Asked how it felt during the space flight, Jeff Bezos let out an excited "Oh my god!" at a press conference today.

"My expectations were high, and they were dramatically exceeded," he continued.

Bezos said that zero-G was a "big surprise" to him because "it felt so normal."

"It felt so — like, almost like we were as humans evolved to be in that environment. That's impossible, but it felt peaceful," he said.

He called it a "very pleasurable experience."

Rep. Pramila Jayapal, chair of the House Progressive Caucus, retweeted CNN's story on Blue Origin, this morning adding, "On a related note, a wealth tax would generate at least $3 TRILLION for our communities." And Rep. Jerry Nadler called the space flight "self-indulgent" and joins Jayapal and other progressives in calling for a wealth tax "on mega billionaires like Bezos."

Last month, Sen. Elizabeth Warren said of Bezos' trip into space, "He's laughing at every person in America who actually paid taxes ... Jeff Bezos' trip to outer space is being financed by all the rest of the US taxpayers who paid their taxes so that Jeff Bezos didn't have to."

Warren and Jayapal together introduced legislation for a wealth tax along with Rep. Brendan Boyle. 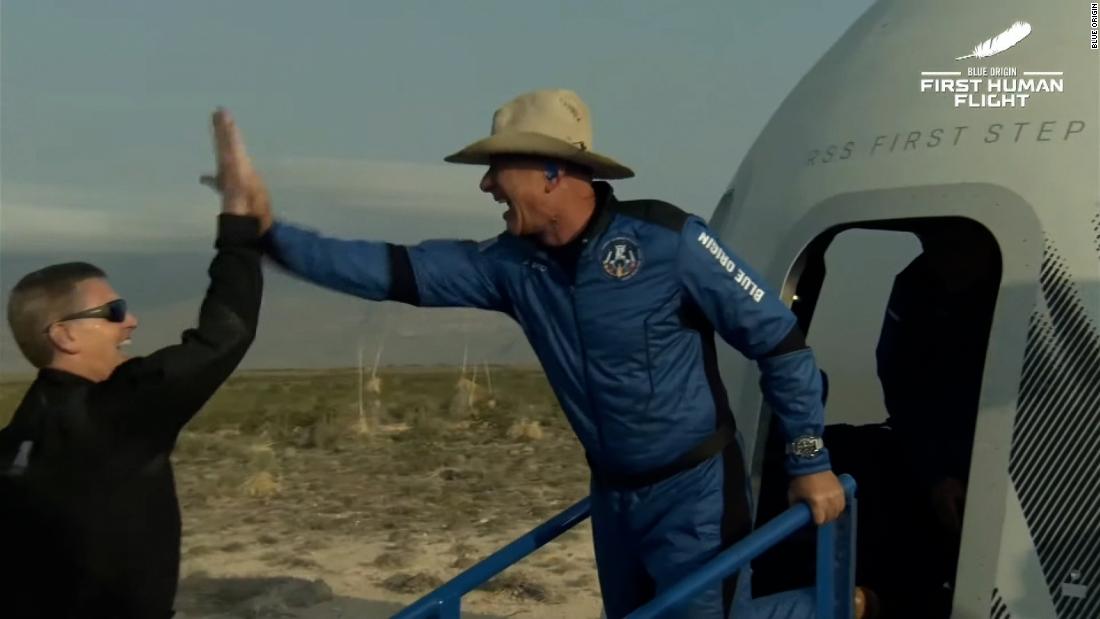 The crew members aboard Blue Origin's New Shepard are holding a news conference following their successful spaceflight this morning.

The 10-minute flight went up more than 60 miles above Earth.

After landing safely back to Earth, the crew went through a procedural status check. Jeff Bezos could be heard saying inside the capsule that it was the "best day ever." Mark Bezos said he was feeling "unbelievably good."

CNN's Anderson Cooper spoke with Jeff Bezos and his brother moments after they landed back on Earth. Bezos said the experience of flying to space was "amazing" and nearly impossible to express in words.

Seeing planet Earth from his New Shepard rocket "was more profound for me than I expected," Jeff Bezos told Cooper.

"The thing that was most different for me was the view of Earth. That is the thing that I was surprised by," he said.

"You get up there, and it's so tiny ... It is a small little thing, and it is fragile and ... drives home that point that we know theoretically, that we have to be careful with the Earth's atmosphere. But it really makes it very powerful and real," he said.

Bezos said he and his crew had some "traditional" zero-gravity fun by tossing Skittles at each other and trying to catch the candy in their mouths.

"Zero-G was certainly different than I thought it was going to be. But it was surprisingly natural to move around in that environment, which is not what I was anticipating," Mark Bezos said.

Jeff Bezos said his flight underscores his goal of space exploration, which he views as moving heavy industry to space and keeping Earth for residents and light industry. He said that could take "many decades."

"What we need to do is build a road to space so that future generations can take all heavy industry and polluting industry on Earth and move it up into space. So that we can keep this gem of a planet as it is, instead of ruining it, which unfortunately we might do," he said.

As we wait to hear from Jeff Bezos at a 11 a.m. ET post-flight press conference, it's worth remembering that in the grand scheme of things, what Bezos did today and what fellow billionaire Richard Branson did earlier this month is nothing new. Not really, anyway.

Sure, they're the first billionaires to ride rockets that they've funded themselves to touch the edge of space, but humans have been doing that with publicly-funded programs for decades now.

The first person to go to space, Soviet cosmonaut Yuri Gagarin, went on a 108-minute orbital flight in 1961. The United States government followed shortly after, launching Alan Shepard on a quick suborbital flight — much like Bezos and crew.

It's taken 60 years for billionaires to accomplish the same feat, though they hope to launch a bit more frequently than NASA or the Soviet Union ever did. 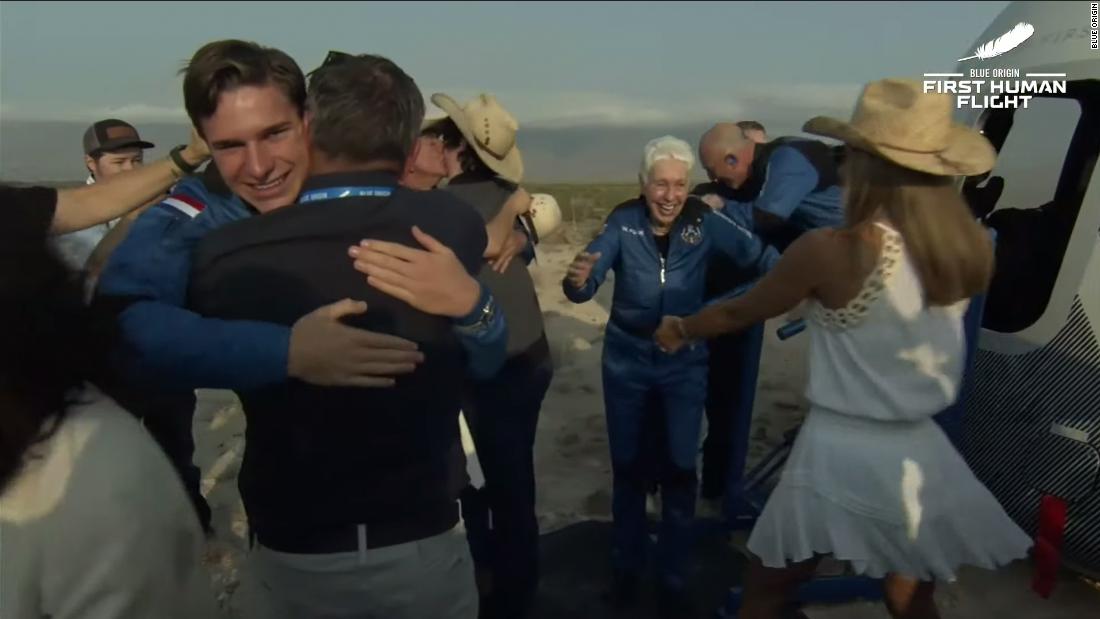 After decades of waiting, Wally Funk finally accomplished her dream of flying to space, becoming the oldest person to do so.

The 82-year-old pilot volunteered as a member of the "Mercury 13" program, otherwise known as the "Women in Space Program," in February 1961, which was a privately-funded effort intended to begin training women to fly in NASA's earliest space programs.

"I got ahold of NASA four times, and said, 'I want to become an astronaut,' but nobody would take me," Funk said. "I didn't think I would ever get to go up. Nothing has ever gotten in my way. They say, 'Wally, you're a girl, you can't do that.' I said, 'Guess what, doesn't matter what you are, you can still do it if you want to do it,' and I like to do things that nobody's ever done before."

Funk has extensive experience piloting aircraft, logging over 19,600 flying hours and teaching more than 3,000 people how to fly private and commercial aircraft.

Daemen was Blue Origin's first paying customer, and his father, an investor, purchased his ticket.

Daemen replaced a mystery bidder who agreed to pay $28 million for a ticket, but who had to reschedule for a later mission because of "scheduling conflicts."