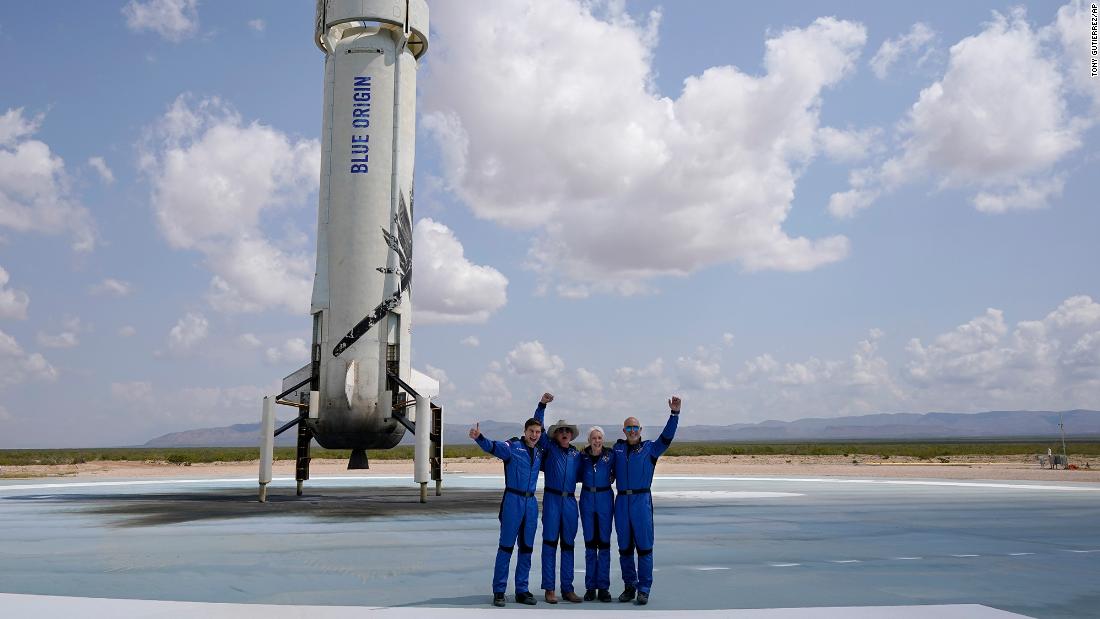 Amazon founder Jeff Bezos successfully flew to space this morning on the first crewed flight of New Shepard, a rocket ship made by his space company, Blue Origin. The trip took approximately 10 minutes.

If you're just reading in, here's what you need to know about the flight — and what comes next for the company:

Jeff Bezos' trip came only nine days after British billionaire Richard Branson launched into space with the help of his company, Virgin Galactic. The two billionaires have been intertwined in the "billionaire space race," as both men have worked to develop, test and launch suborbital rockets that can take customers to space.

Although Branson was the first billionaire to reach space on a craft he helped fund on July 11, Bezos is now considered the richest person to launch into space.

"It continues to be a great time for commercial space travel! We are encouraged by seeing more people exploring and conducting research in space, and creating a positive impact here on Earth," Virgin Galactic wrote on Twitter, adding that the two companies will together "open space for good!"

Here's a look at the company's messages:

"I think if more people can see the type of technology that's been applied to this, autonomous rockets that are taking off and landing, we have a whole spectrum of people that are going to be thinking 'hey, one day I may start my own company and build my own rocket.' And maybe that's a kid from a ZIP code that doesn't usually get a chance to do some of these things. And so seeing this access and opportunity and belief that anything is possible for all kids," Melvin said to CNN's Ana Cabrera.

Melvin said having a capsule and rocket that are reusable is a "game-changer."

"I think this is going to be making space more affordable. The price point will come down for more tourists to be able to go to space," he said.

After Jeff Bezos and crew completed their spaceflight today, Blue Origin announced it is open for ticket sales. Those interested in flying on a future Blue Origin flight were asked to send the company an email — but they did not divulge how much a ticket will cost. Blue Origin has not sold tickets to the general public yet. 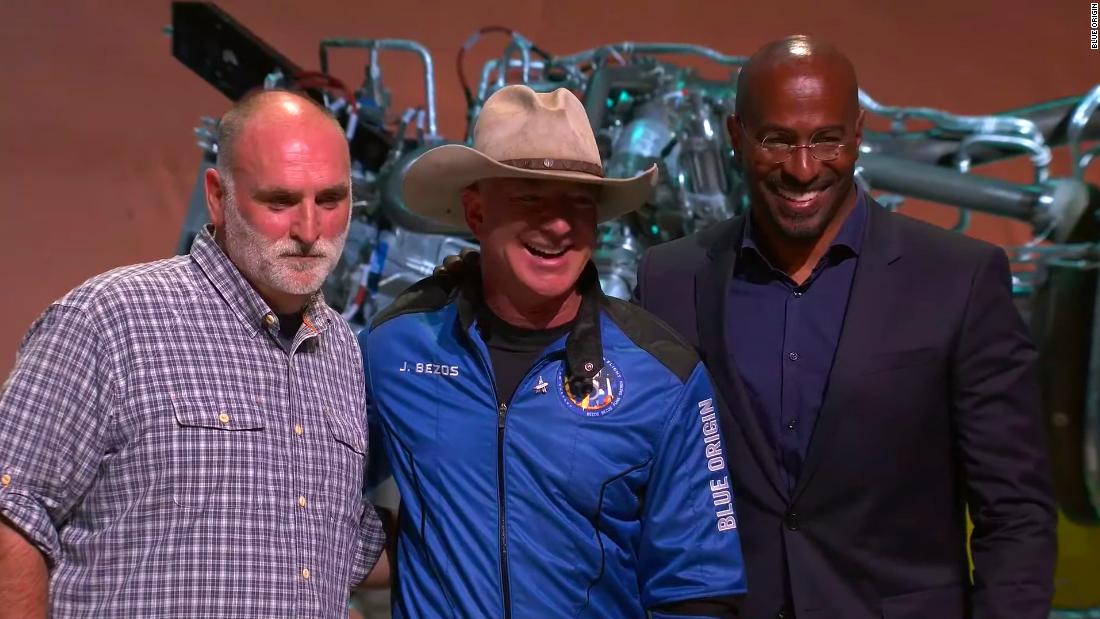 "It recognizes leaders who aim high and pursue solutions with courage who always do so with civility," Bezos said.

The award is $100 million, Bezos announced. The recipient can give that money to the charities and the nonprofits of their choice.

Andrés and his nonprofit World Central Kitchen have responded to several major crises, mobilizing volunteer chefs in disaster areas to prepare meals for thousands of people in need.

"I'm grateful for this award. And the incredible support from you, Jeff, and the entire Bezos family. Our kitchen was born from a simple idea that food has the power to create a better world. A plate of food is a plate of hope. It's the fastest way to rebuild lives and communities," Andrés said.

"I haven't always been courageous. But I know the people who are. They get up every day on the frontlines, grassroots communities. They don't have much, but they're good people and fight hard and they don't have enough support," Jones said. 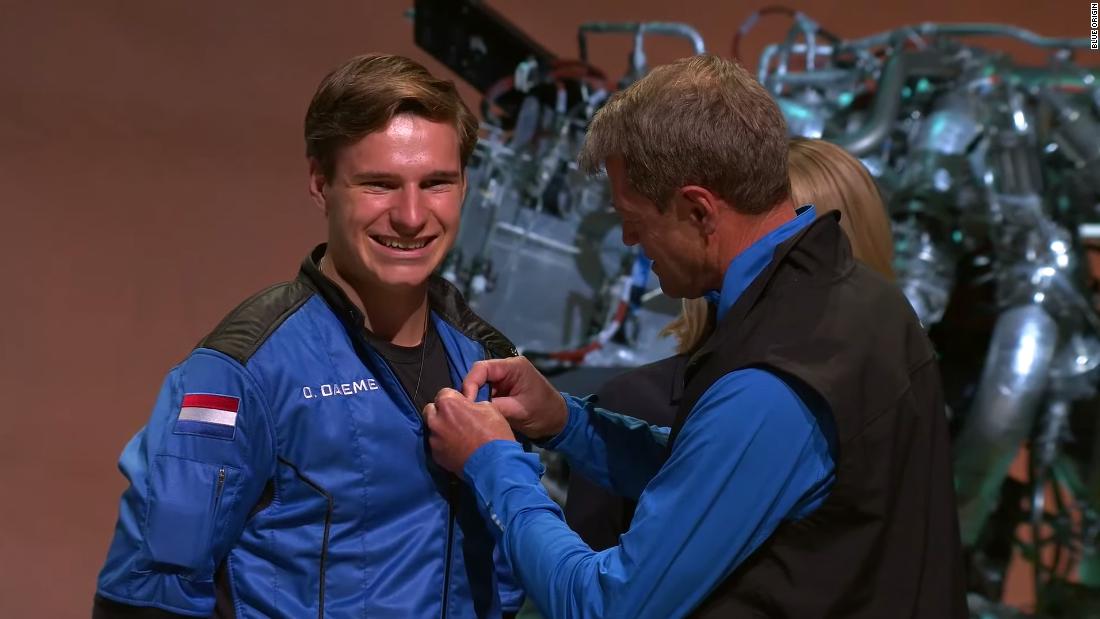 Oliver Daemen — a 18-year-old recent high school graduate, Blue Origin’s first paying customer and the youngest person ever to fly to space — said “for sure” when asked if he got his money’s worth.

Daemen said “it was so amazing” and agreed with Jeff Bezos that “it feels so natural, like, almost like we should be doing this” to be in zero gravity.

Earlier Bezos said being in zero gravity “felt so normal, it felt like, almost like, we were, as humans, evolved to be in that environment which I know is impossible.” 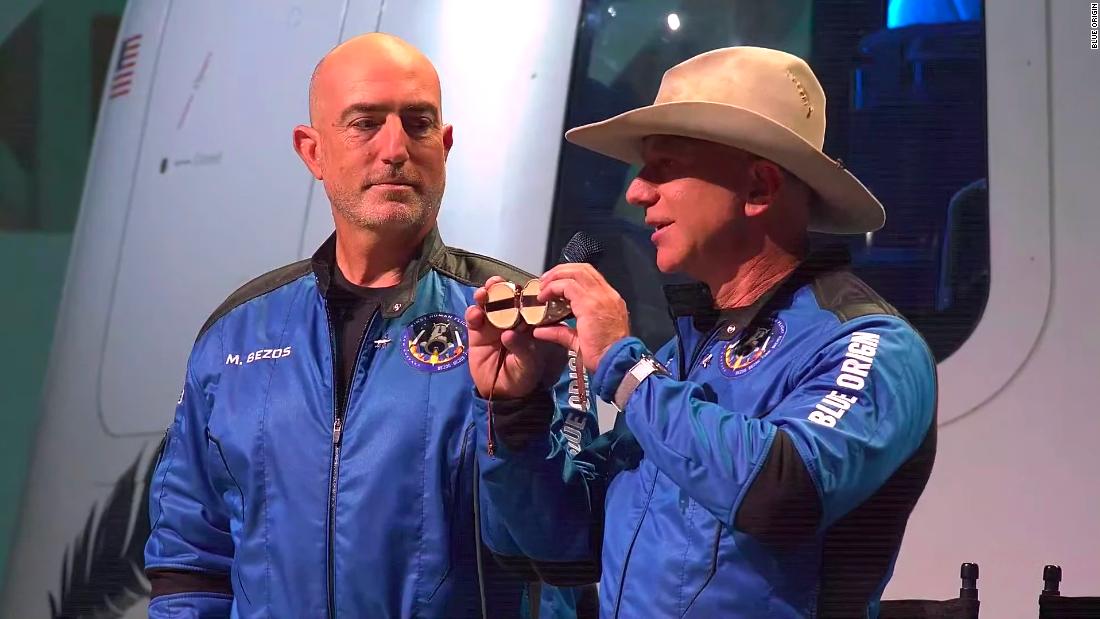 Jeff Bezos said they took the goggles Amelia Earhart flew across the Atlantic with to space.

“I like to think that if Amelia were here, she’d be very, very proud of Wally,” Bezos said, referring to Wally Funk, the oldest person to ever travel to space.

Earhart became the first female pilot to fly solo across the Atlantic in 1937.

Bezos also presented his mother with a Blue Origin feather necklace that he wore up into space.

After Bezos and crew completed their spaceflight today, Blue Origin announced it is open for ticket sales. Those interested in flying on a future Blue Origin flight were asked to send the company an email — but they did not divulge how much a ticket will cost. Blue Origin has not sold tickets to the general public yet.

Bezos said he is planning two more flights this year and more in the future.

Bezos compared this first spaceflight to him starting out with Amazon.

"What we're doing is the first step of something big. And I know what that feels like. I did it three decades ago, almost three decades ago, with Amazon. ... You can tell when you're onto something. And this is important. We're going to build a road to space so that our kids and their kids can build the future," Bezos said.

Mark Bezos said the crew borrowed two meaningful items from The Explorers Club to take on their trip to space: a piece of canvas from the plane the Wright Brothers flew and a bronze medallion made from the first hot air balloon flight.

“We were able to fly with a piece of canvas from the Wright Flyer, so the plane that the Wright Brothers flew, we brought a piece of that canvas with us which was really powerful, as well as a bronze medallion that was made from the first hot air balloon flight in 1783, which was the first time man ever, you know, left the Earth in controlled flight so we were very thrilled to bring both of those along with us,” Mark Bezos said.

His brother, Jeff Bezos, quickly added that they brought those items back to Earth with them. 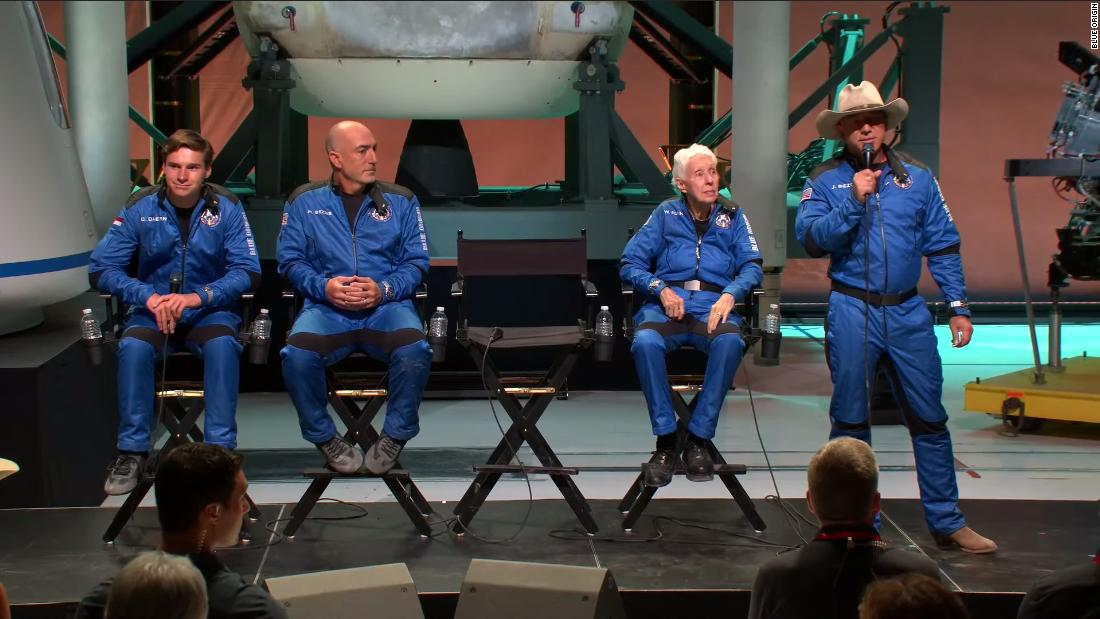 Asked how do you bring the cost of space travel down over time so it's more accessible to everyone, Jeff Bezos said, "You've got to do it the same way we did it with commercial airline travel."

He said that space travel is in the "barnstormer phase" right now.

"That's what we're doing right now. You know where that barnstorming phase leads? To 787s. And that's what we have to do," he said.

Bezos and his crew successfully completed a spaceflight earlier Tuesday. They were flying on the New Shepard, the rocket ship made by his space company, Blue Origin.